Toronto-based tech startup Recipeasly has gone down in flames after being dragged online this weekend by cooks and food bloggers.

Just five hours after announcing its launch, Recipeasly—a website offering users access to online recipes "without the ads or life stories"—was taken offline by its creators following charges by the Twitterverse of plagiarism and content theft.

Hundreds of recipe-makers, food writers, and members of the restaurant industry tore through the comment section of Recipeasly co-creator, Tom Redman.

Two friends and I created a new thing to fix online recipes 😄https://t.co/3ZNkSV82Y5 - your favourite recipes except without the ads or life stories 🍩

Redman tweeted about the re-launch of Recipeasly on Sunday afternoon. The app, which he says was created with two others, has actually been around since 2013.

A new iteration of the site promised to "fix online recipes", allowing users to source recipes and import them onto an account, like a virtual cookbook.

By Sunday evening, Redman announced that the team had taken Recipeasly down.

Wait, so you are just stealing content, eliminating context and creator revenue, and diminishing the labor that is the only way these recipes exist in the first place because you have decided the humans behind them are annoying?

"I'm sorry, we hear you," tweeted Redman. "Given the feedback, we are taking recipeasly.com down as we re-examine our impact on the community."

The website has also been reduced to a static landing page to say that the team had "missed the mark big time." 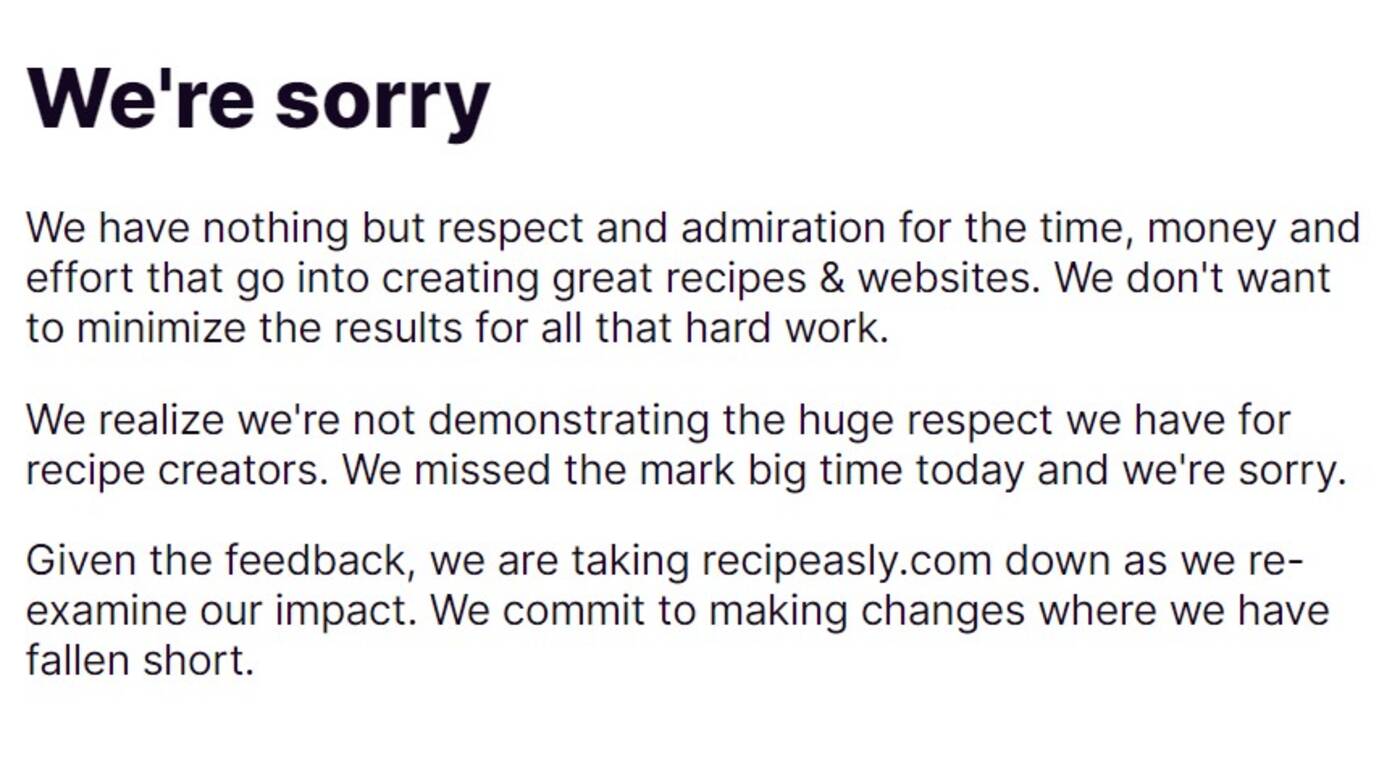 Recipeasly has replaced its website with a landing page offering an apology and announcing that the site has been taken down. Photo via Recipeasly.

Amidst the Twitter thread wreckage, Redman clarified that Recipeasly was not profiting off the app (yet) and that all recipes on their homepage linked back to the original recipe.

But as countless recipe-makers pointed out, there are problematic aspects to Recipeasly's model, like allowing users to sidestep the write-ups on most food bloggers' websites.

Anyone who has read an online recipe should be familiar with that format: the lengthy, sometimes extraneous, chunk of text preceding the actual recipe that includes some backstory and perspective from the writer.

So y'all just want to out recipe writers completely out of business? This is extremely gross.

But there are a variety of reasons why bloggers need to include write-ups in front of their recipes, including possibly being penalized by Google's search engine algorithm for not including original content.

The option to skip the author's "life story", as Recipeasly advertised, also means potentially glazing over important cultural and historical contexts of a dish.

EVERY editorial website has a ton of ads. I’m not sure why the developers decided to target only recipe sites. We might as well have an app that strips ads for all online content (without the permission of the content creator at that).

On top of that, Recipeasly's latest iteration did not suggest compensation for content creators, predominantly women, from whom it was extracting recipes from.

Food bloggers claimed that it would, instead, piggyback off the work of people who spend time and money writing, photographing, and actually crafting and cooking their recipes, directing views (and money) from the original creator.

Recipeasly did not immediately respond to blogTO's request for comment.