The Ontario government released a brand new COVID-19 framework this week amid growing cases numbers in the province, and it includes specific details for when preventative and responsive measures should be lifted or introduced in different regions.

The framework, titled the Keeping Ontario Safe and Open Framework, categorizes public health unit regions into five levels based on their local COVID-19 situation and outlines specific rules for businesses and organizations in each of these levels.

On Nov. 14, Toronto is expected to enter the Orange-Restrict level — exactly one week after the Eastern Ontario Health Unit, Ottawa, Peel and York Region are set to do the same — and this means restaurants and bars in the city will be permitted to resume indoor dining.

Today, our government announced a framework that will protect the health and safety of individuals and families, while avoiding broader closures across the province.

Learn more about our new framework and what it means to you:https://t.co/YDiMNv3Pi1 pic.twitter.com/LOjnPascYV

The practice has been banned in Toronto as well as other COVID-19 hot spots in the province since the government moved the regions into a modified version of Stage 2 amid rising case numbers, but that ban was set to expire this Friday, Nov. 6.

At the request of Toronto Mayor John Tory, however, indoor dining in the city will remain closed for yet another two weeks while the rest of the province's regions get comfortable in their new levels.

After the two-week period is up, restaurants and bars will be able to reopen their doors to the public, but they'll have to follow a new set of rules outlined in the colour-coded framework.

Under the framework's rules for the Orange-Restrict level, restaurants and bars will be required to continue following some of the restrictions currently in place for food and drink establishments, including a two-metre distance between tables, no buffet-style service, mandatory face coverings except when eating or drinking, and more.

The new measures for this level, which the government calls "intermediate," require that there be a 50-person indoor capacity limit, a closing time of 10 p.m., and that liquor be sold or served only between 9 a.m. and 9 p.m.

The new rules additionally state that establishments will be required to screen patrons for symptoms upon arrival using a questionnaire, and that a limit of four people can be seated together at each table.

And, likely to the dismay of many in the industry, strip clubs must remain closed in this level. 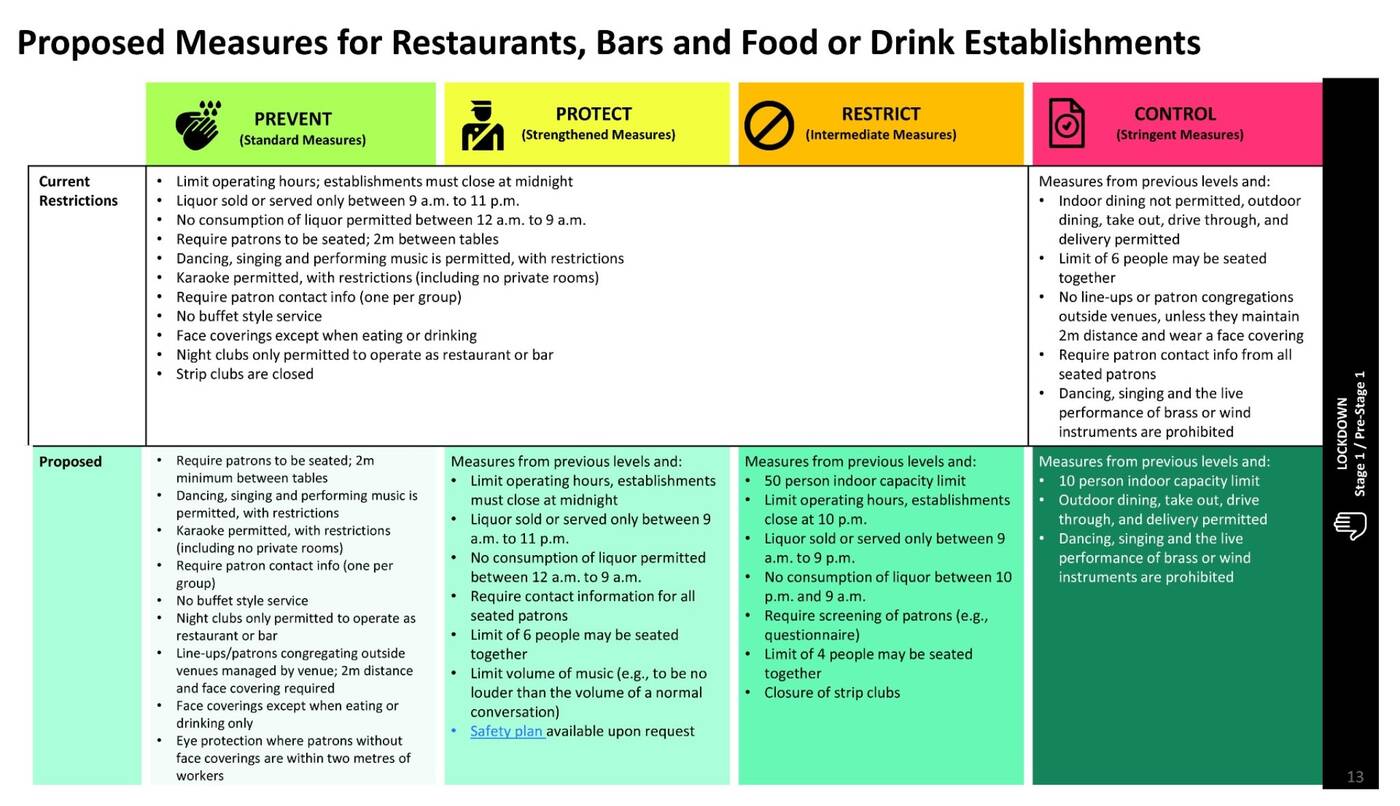 As public health indicators in the city improve, Toronto could move out of the Orange-Restrict level and into the Yellow-Protect level, which includes slightly looser restrictions such as an 11 p.m. last call for alcohol, a 12 a.m. closing time, requiring contact info from each patron, a limit of six people seated together at one table, and more.

The province has meanwhile clearly stated that the goal is to eventually get every region into the Green-Prevent level.

Restrictions for establishments are far more relaxed in this category, with mostly just the main social distancing, mask usage and contact tracing rules in place.

"It's clear COVID-19 will be with us for a while, which is why we are putting in place a framework that will protect the health and safety of individuals and families, while avoiding broader closures across the province," said Premier Doug Ford in a government release.

"This framework, developed in consultation with our health experts, will serve as an early warning system allowing us to scale up and scale back public health restrictions on a regional or community basis in response to surges and waves of COVID-19. By introducing public health measures sooner, we can keep this deadly virus at bay, bend the curve and reclaim a little more of our normal lives."