The top 24 farmers' markets in Toronto by neighbourhood

Farmers' markets pop up in most Toronto neighbourhoods once per week to offer fresh produce and other locally made foodstuffs. Stop by to support the folks producing delicious food on our city's doorstep.

Here are my picks for the top farmers' markets in Toronto by neighbourhood.

Find the Bloor/Borden Farmers' Market in the parking lot at Bloor and Lippincott from 3 p.m. until 7 p.m. every Wednesday in the spring and summer.

Toronto Botanical Garden hosts a Thursday market from 2 p.m. until 7 p.m. year round. It features organic meat, local produce and raw unpasteurized honey, as well as a collection of vendors.

The market at Dufferin Grove Park happens every Thursday throughout the year. In the summer months, you'll find vendors lining the sidewalks hawking produce, locally pressed olive oil and ready-to-eat fare from the park's wood-burning oven.

You can get to the Evergreen Brick Works market via a shuttle bus from Broadview station. Here, 50-plus vendors sell everything from fresh flowers to breads. Experience it on Saturdays from 8 a.m. until 1 p.m.

The Cabbagetown Farmers' Market takes place from 3 p.m. to 7 p.m. on Tuesdays from May to October in West Riverdale Park.

Get out of your condo and shop this Urban Market that runs from 10 a.m. until 5 p.m. at the Concord Presentation Centre.

Rain or shine, find the Withrow Market up and running every Saturday from 9 a.m. to 1 p.m. in Withrow Park. Meet urban beekeeper Brian Hamlin and shop his wares while loading up on fresh veggies and French-style sourdough. 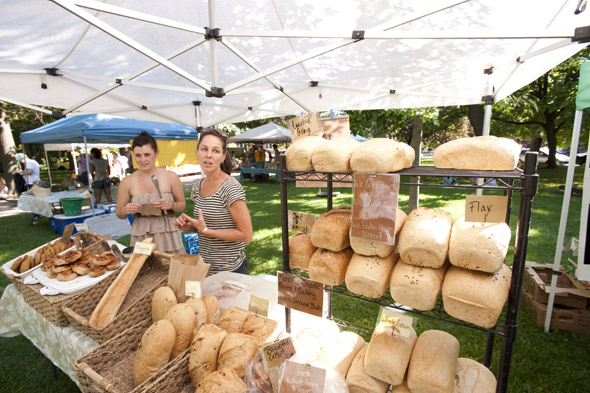 The Trinity Bellwoods Farmers' Market runs on Tuesday from 3 p.m. to 7 p.m. in the north-west corner of the park. More than two dozen vendors sell their goods here.

Stock up on Ontario produce, baked goods, honey and preserves at the East York Farmers' Market. The outdoor market runs mid-May to October on Tuesdays from 8 a.m. to 2 p.m. in front of the East York Civic Centre.

Shop local and enjoy a little al fresco dining in a landscaped picnic area at Montgomery's Inn Farmers' Market all year long on Wednesdays. from 2 p.m. to 6 p.m.

The Junction Farmers' Market runs at the Junction train platform from 9 a.m. until 1 p.m. every Saturday. This one gets busy!

The Metro Hall Farmers' Market brings local growers and food purveyors together every Thursday from late May to late October, 8 a.m. to 2 p.m. in this courtyard off King Street West. 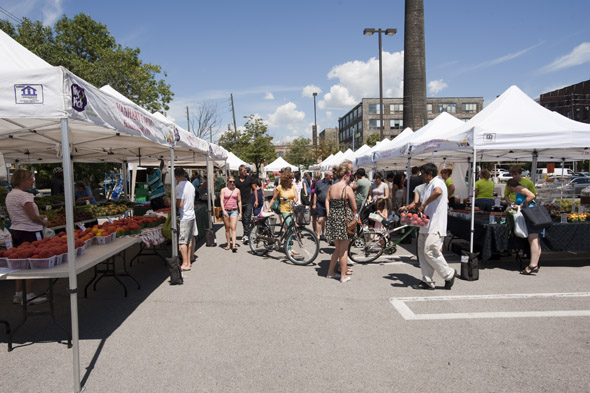 The MyMarket in Liberty Village transforms the Green P on Hanna Street with vendors on Sundays from 10 a.m. to 2 p.m. in the summer months.

At Mel Lastman Square, the farmers' market runs on Thursdays from 8 a.m. until 2 p.m. from May until October.

Now branded as the Taste of Regent Park, this weekly farmers market runs from the end of June through the summer. Find it every Wednesday starting at 5 p.m. followed by a movie and a meal.

The The Sorauren Farmers' Market runs year-round on Mondays from 3 p.m. to 7 p.m. In the summer , you'll find the market int a grassy parkette at the corner of Wabash and Sorauren Avenue, while in the winter it moves inside to the Field House.

UTSC Farmers Market is an on-campus source for produce, bread, cheese and more. In the summer, find vendors every Wednesday from 11 a.m. 3 p.m. at parking lot number 4. In the winter, it's indoors at The Meeting Place.

The Stop's farmers' market at Wychwood Barns is open all year lon. Head here on Saturdays from 8 a.m. to noon to fill up on sandwiches from Dundas Park Kitchen and shop.

On Saturdays from 5 a.m. to 3 p.m., the world's best marketplace gets even better as an influx of merchants congregate to sell fresh fruit and veggies, baked good and organic meat under a big white tent just south of the main market building.

Appletree Markets and Ryerson Eats host a farmers' market from 11 a.m. to 2 p.m. at the corner of Gould and Victoria streets every Wednesday from mid-May until the first week of October.

Appletree's Uptown Market opens on the front lawn of St. Clements Church every Thursday from 3 p.m. to 7 p.m. from June to October.

Jesse Milns at the Montgomery's Inn Farmers' Market. With files from Liora Ipsum.