The top 25 Middle Eastern restaurants in Toronto by neighbourhood

Middle Eastern restaurants in Toronto share similar ingredients and sometimes dishes, though the spelling can be wildly divergent. These are restaurants where mezze, falafel and kebabs are stars, and sharing around a big table is encouraged.

Here are my picks for the top Middle Eastern restaurants in Toronto by neighbourhood.

The menu is always changing at Fat Pasha on Dupont, but count on falafel, fattoush salad and lamb shawarma to all make appearances.

Mayrik is an Armenian restaurant that pays homage to a mother's kitchen while bringing a new elevated vibe to the cuisine. Shareable mezzes here include mante, handmade Armenian seasoned beef dumplings.

If you're looking for authentic Lebanese you'll find it at Little Sito. You can go for just a light snack, or go all out and order giant platters with dips, mjadra, loob’ieh b’zeit with olives, fried cauliflower, and crunchy falafel.

Parallel is a cafe and restaurant that serves a range of hot and cold drinks as well as hummus, halva and a variety of sandwiches and hot dishes. They're home to some of Toronto's best falafel and shakshuka.

Flame Food + Design is anything but ordinary. The space is three things in one. Find a cafe, a design store, and a restaurant serving modern Anatolian eats from an Argentinian grill inside. 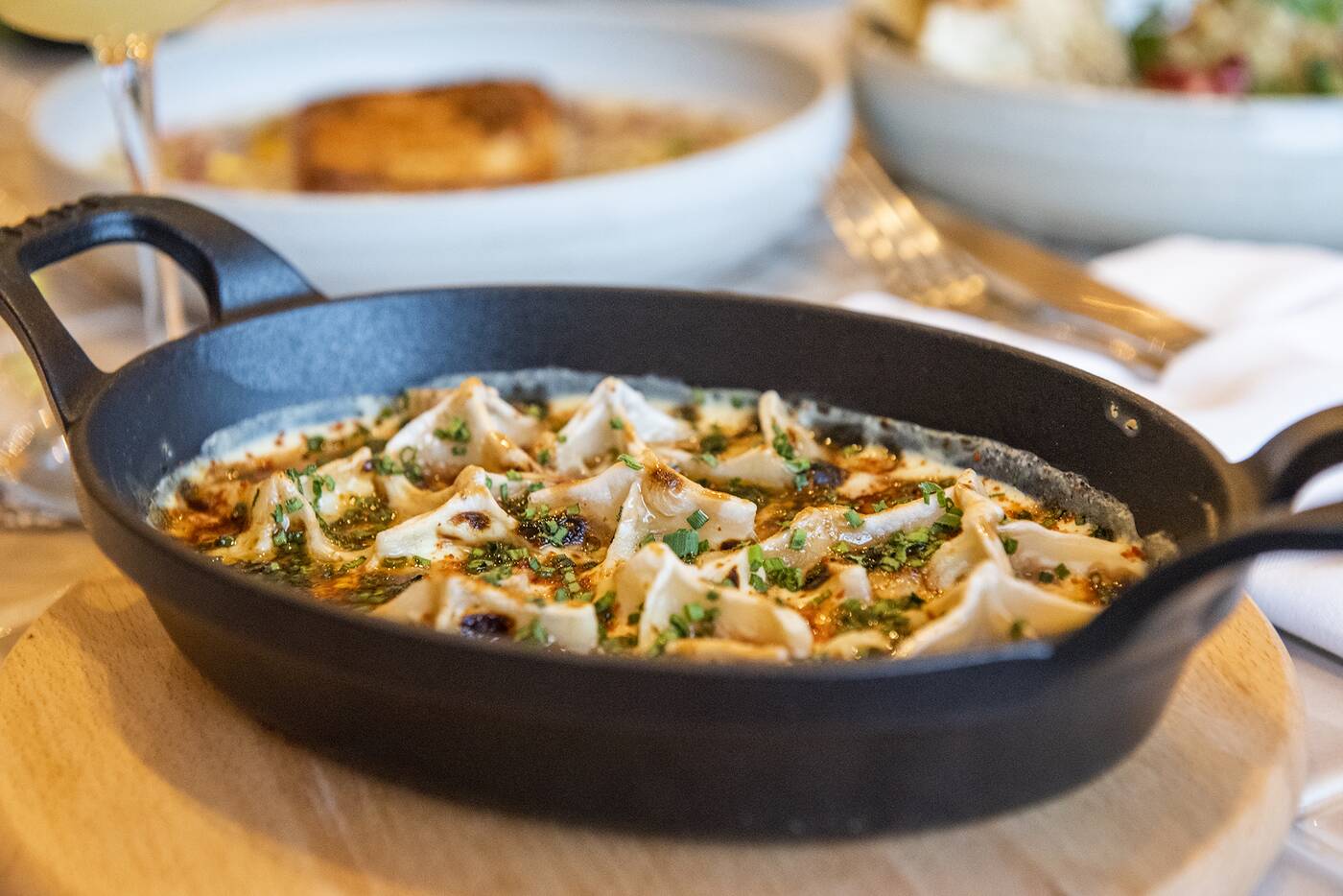 Byblos serves dishes that are almost too pretty to eat. Photo by Hector Vasquez.

Takht-e Tavoos is the little sibling of The Pomegranate at Dufferin and College. This breakfast spot does precious brunches of delicate little Middle Eastern tapas like olives and salads.

Aish Tanoor is a Kosher Israeli Middle Eastern restaurant, serving favourites like hummus and some of the best shawarma in the city.

Start with mint tea or fragrant cocktails at Byblos before ordering a selection of traditional mezze. Highlights include the Turkish manti dumplings, stuffed with eggplant and covered in molasses and chives.

Anatolia is a Turkish restaurant near Kipling Station where the walls are adorned with colourful tapestries. Open with an order of lentil soup and a spread of mezze before moving on to traditional dishes like shish kebab.

You no longer have to trek out to Richmond Hill to get your fill of Cafe Landwer. The popular Middle Eastern restaurant has a location on University Avenue and it serves up all your favourites like shakshuka and hummus. 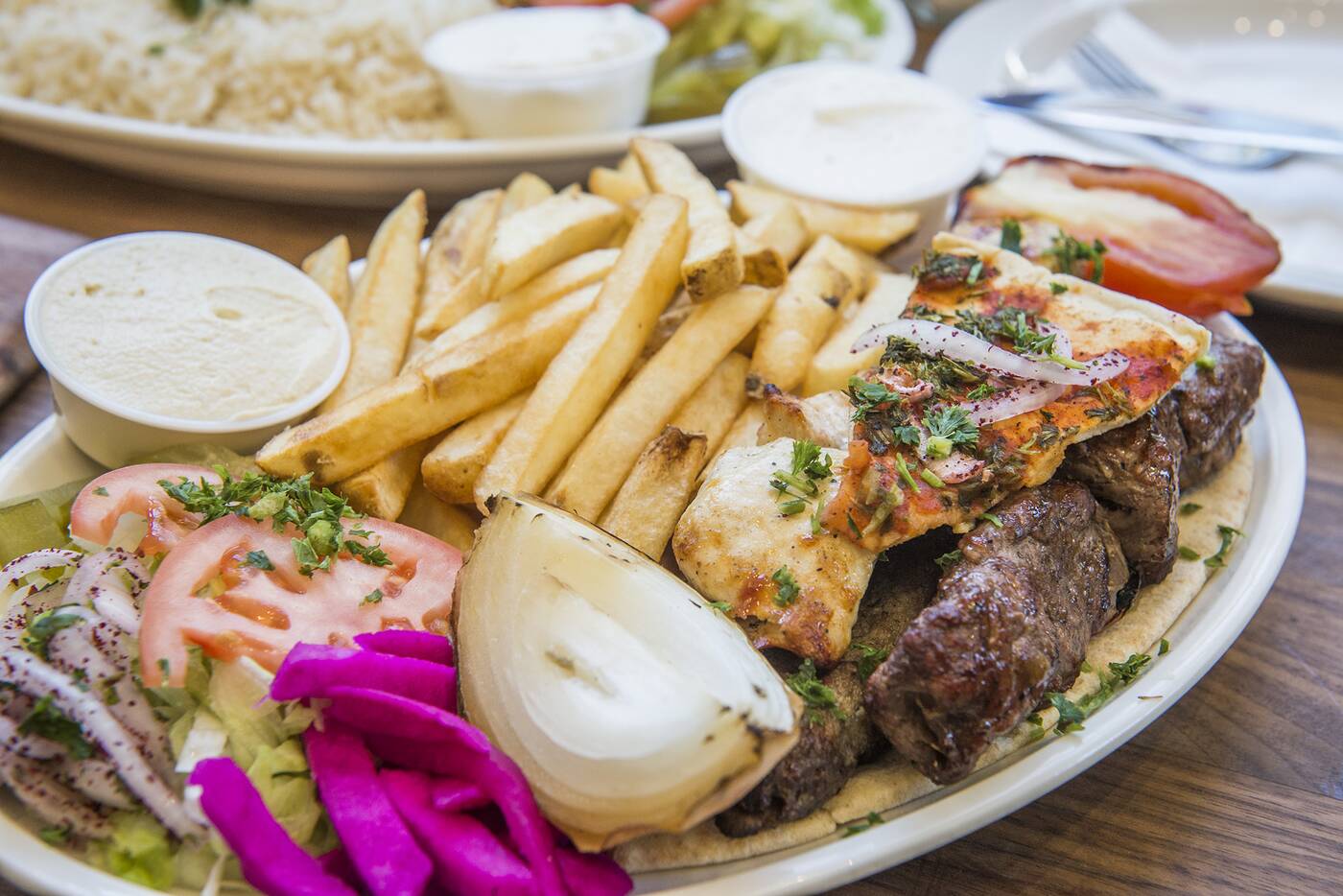 Paramount Fine Foods doesn't mess around when it comes to platters. Photo by Hector Vasquez.

Mashu Mashu is a Mediterranean grill where the thing to get is the appetizer combo and mixed grill, which optimizes the number of meats and mezze on the table.

Paramount Fine Foods boasts many locations around Toronto, including one next St. Lawrence Market. Like their other locations, the restaurant serves giant platters of grilled meats and shawarma. Everything is halal too.

For a taste of Egypt, head to Maha's, where the menu features sunny eggs and foole, falafels stuffed with eggs, and the Pharaoh's po' boy sandwich.

Start with yogurt dips like the maast-o khiar served with barbari bread at The Pomegranate. When it comes to entrees, you're going to want one of the braised lamb dishes like the morasa polo with jewelled rice and braised lamb shank.

Bamiyan Kabob on Markham Road is one of many GTA outposts from this chain of Afghan eateries. Kebab wraps and dinners packed with rice and salad are the thing to get. 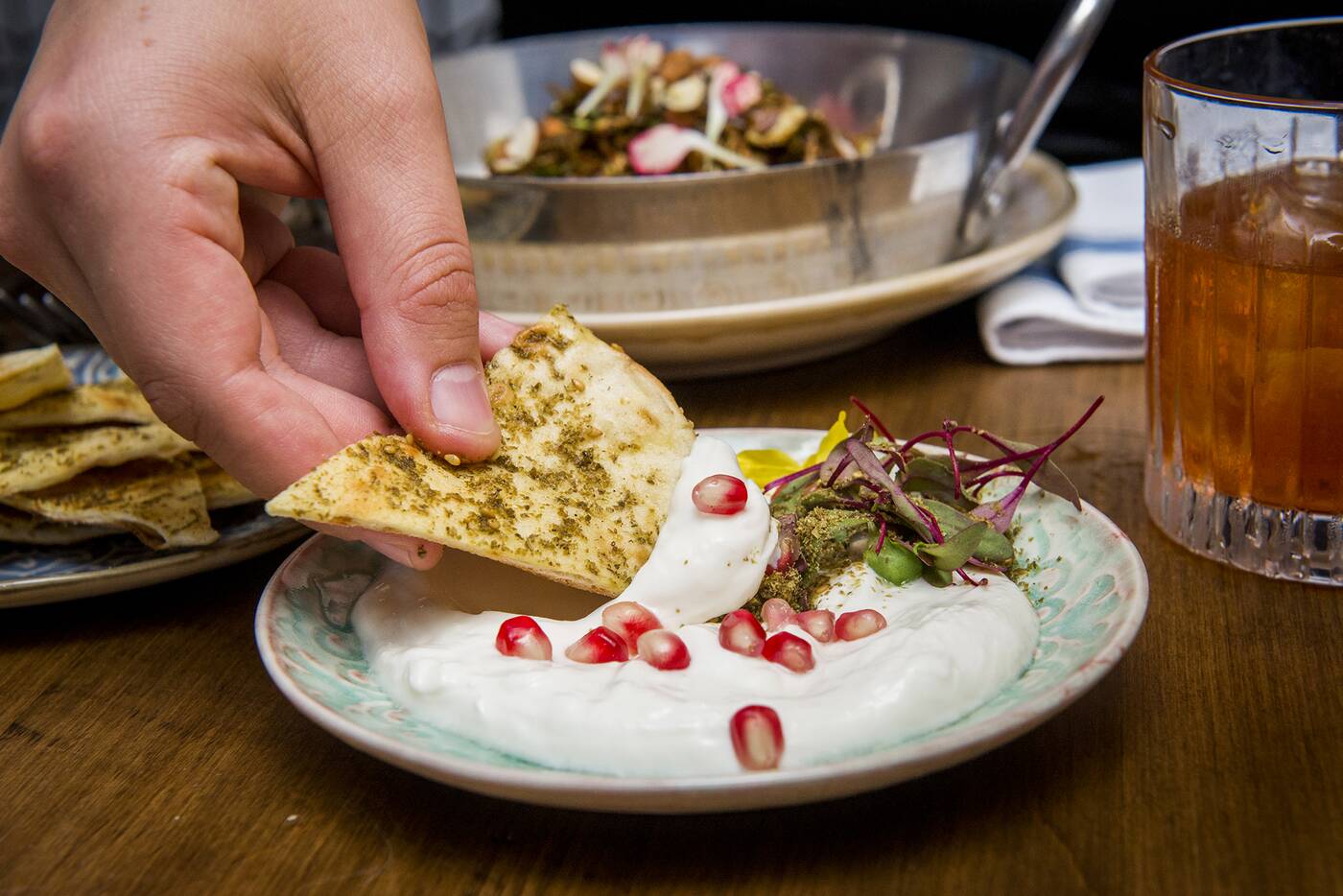 Labneh and pita is the perfect start to any meal at Bar Sybanne. Photo by Hector Vasquez.

Mustafa is the place to get Turkish pizza, also commonly referred to as pide, in Toronto. The dish is a long, flat, boat-like bread stuffed with cheese and other toppings. If you haven't tried it, you're seriously missing out.

Bar Sybanne is a restaurant and bar serving tapas inspired by Israeli, Lebanese and Moroccan cuisine sharing-style. Fill up on offerings of labneh, crudo and saffron rice.

A vibrant spread of mezze and grilled meats are a delight to enjoy at Tabule. The beautiful space decorated in geometric patterns and gilded accents is almost as nice as the colourful plates of tabbouleh, fried eggplant and kefta banadura.

Ghadir has long existed as a meat market, but now functions as a butcher, small grocery store and restaurant serving their legendary shawarma and other meat goodness. Their stuff is so good they're even supplying other shawarma joints such like Shawarma Empire. 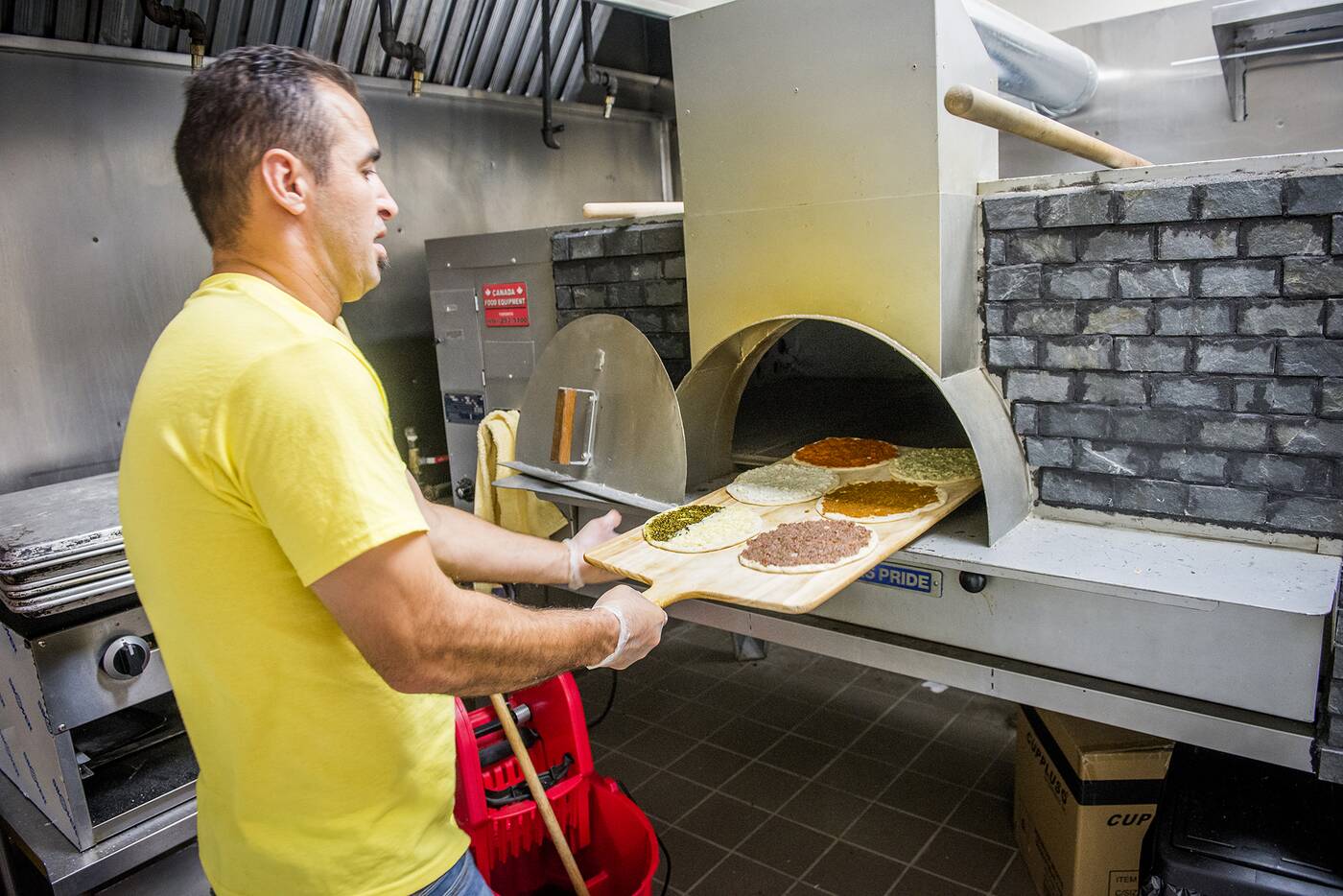 Kandahar Kabab serves Afghani kababs and other traditional cuisine specific to the Kandahar area. The epic mini-chain has several locations in Toronto to get your fix.

Get a taste of Syria right in Toronto at Soufi's. The restaurant specializes in freshly oven-cooked man'eesh flatbreads stuffed with meats, cheeses and veggies and cheesy, sweet knafeh pies.

Zezafoun focuses on Syrian cuisine and does staples like fattoush salad. However, the bulk of their menu revolves around a hot table where three to five dishes of the day are served. There's typically a beef, chicken and at least one vegan or vegetarian option each day.

A La Turk is a Turkish restaurant specializing in kebabs and pide. A must-try is the veal fillet pide featuring marinated minced meat, stretchy Turkish mozzarella and veggies.

Hector Vasquez at Parallel. With files from Liora Ipsum and Jaclyn Skrobacky.