The top 20 bars and cafes for board games in Toronto

Toronto bars and cafes aren't just for sipping on beers and lattes. A number of the city's best are offering up the chance to roll the dice and play some boards, both new and old. So, gather up your most competitive crew and get ready to get your game on.

Here are my picks for the top bars and cafes to play board games in Toronto.

This Dundas West cafe now has even more room for board game enthusiasts. It’s $3.50 per hour of play or $7 per person for unlimited play.

Situated in a cottage-style house on Harbord, this might just be the coziest spot dedicated to games in the city. You'll find all of the classics in their mix of hundreds of games.

The Leslieville spot is a mecca for brew lovers and dog owners alike. Here, dogs and humans alike can mingle over drinks and play board games like Dog-opoly.

Board games can be found scattered about this Annex bar, adding to the college vibe of the space but also giving some cottage feels at the same time.

The Bloor and Ossington joint boasts a hodgepodge of board games like Yahtzee and Monopoly, alongside a menu that's stacked with vegetarian options.

Not only can you purchase any board game imaginable at this Danforth gaming destination, they also have a whole whack of games to play onsite.

For The Win Cafe

This Yonge and Lawrence cafe has shelves filled with classics like Monopoly, Scrabble, Operation, Sorry, Clue and Battleship. There's also plenty of drinks and baked goods to keep your energy up. 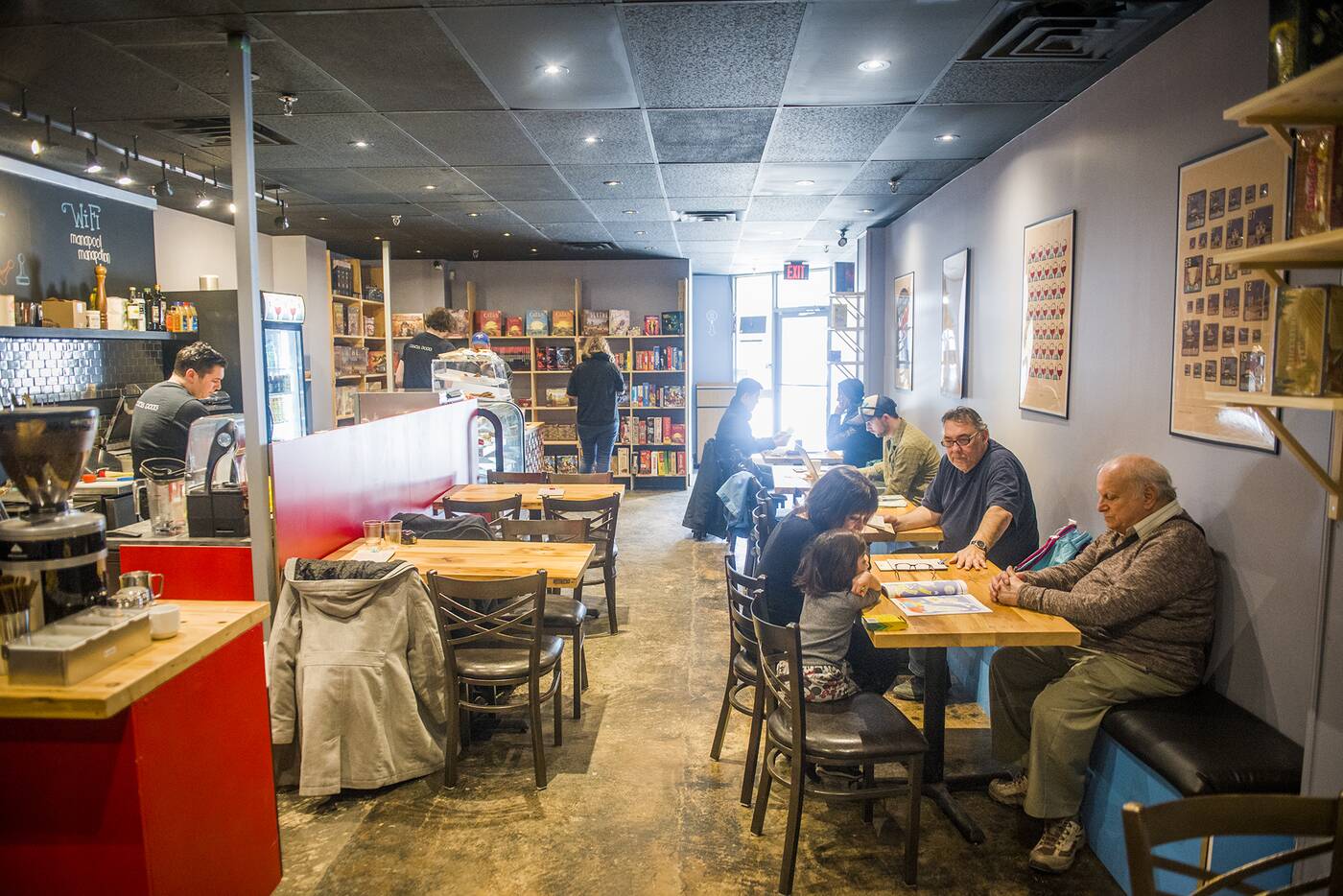 There's coffee and snacks to keep you fueled at Mana Pool in Bloor West Village. Photo by Hector Vasquez.

This bar at Yonge and Eglinton is the ultimate underground hangout. Chow down on Southern Smoked Watermelon sandwiches while playing all your favourite board games from your childhood.

This dark and dive-y bar near Queen and Ossington has a good list of craft beers and a few big piles of board games. Candy Land, Balderdash and Taboo all await.

The cafe at Yonge and Wellesley has it all. They've got a variety of escape rooms as well as board and video games. Head over with your friends and grab a hot bevvy while you play.

Make your way to the back of this Roncesvalles bar for the Rolling Stones-themed pinball machine, a PS3 connected to a big-screen TV, and various board games.

This gaming paradise in the Junction sports large tables, decorated appropriately with steel and caution tape. Grab Connect, Exploding Kittens or Resistance and get to playing.

Etobicoke is where you'll discover this part cafe, part vintage shop. Nostalgic books and board games are scatted about so you can have some old school fun while you sip away your Vietnamese egg coffee. 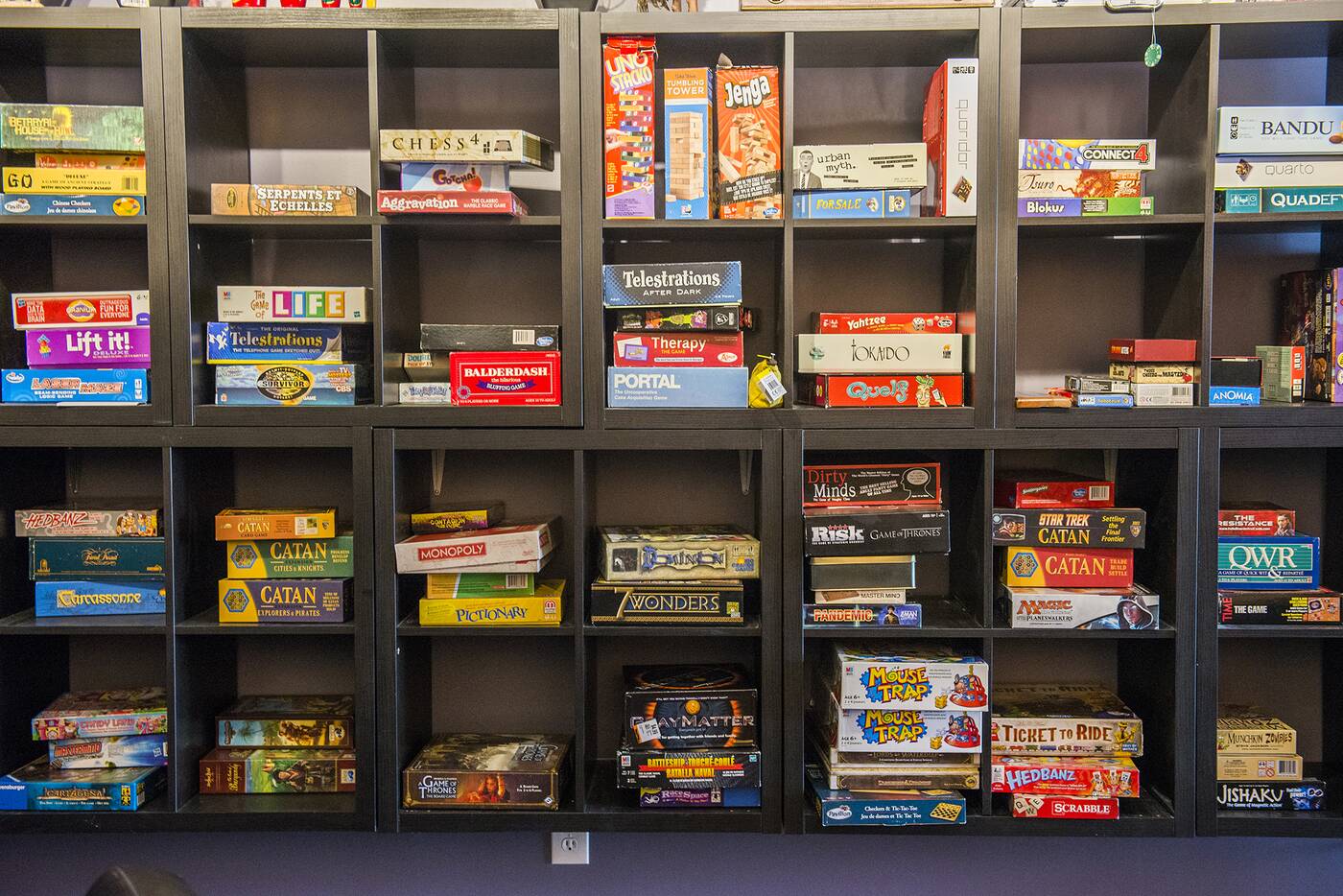 Catan, Life and Mouse Trap are just a few of the games you can play at Time Capsule Cafe. Photo by Hector Vasquez.

Toronto's most famous board game cafe boasts various locations across the city. They have walls stacked with just about any game you could imagine, from your Monopolies of the world to Jumanji and Fireball Island.

Choose from more than 2,500 games available at this St. Clair West spot with a fun Lichtenstein-esque interior, snacks and trivia nights.

Canada’s so-called nerdiest bar has landed in Toronto. You can find it inside in a two-storey Victorian mansion on Church. When you're done gawking over the epic interior, the place is full of board games to play.

Get back to the classics at this Cabbagtown pub, with a game of Risk, Connect Four, or Trivial Pursuit. Or, if you're of the new gaming generation, they've also got Settlers and Cards Against Humanity.

This Leslieville comic book cafe stocks a variety of board games that can be played while sipping on one of their lattes.

This board game cafe on Danforth near Woodbine is outfitted with tables, couches, bean bag chairs and an endless number of games, including Settlers of Catan, Cranium and Jenga.

Hector Vasquez at Snakes and Lattes