Competition was fierce this year at Caplansky's third annual Latkepalooza, with a number of repeat competitors vying for the greasy apple sauce and sour cream-laden crown. The contest saw seven contestants, with 36 latkes each, duking it out on the eighth crazy night of Hannukah, the Jewish festival of lights.

The event was hosted by Zane Caplansky, owner and restaurateur of Caplansky's Deli, and it's actually part of a larger series he calls the "Battle of the Bubbies" (Yiddish for grandmother) where the traditional foods of Eastern European Jewry are judged. "It's a way of showing people who may or may not be Jewish what our cuisine is all about," Zane explained. 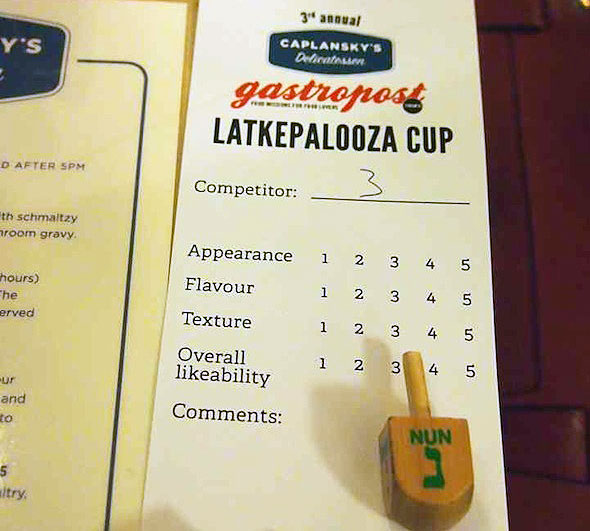 If you're not sure what he's talking about, you just have to think of traditional deli foods like Matzah balls, Gefilte fish, borscht, and such. While the event was sponsored by the National Post's Gastropost, the real judges were a packed house of fans who graded entries on scorecards based on appearance, flavor, texture and overall likeability.

The 2012 entrants came from all walks of life, like 30-something Andrew Cohen who presented a traditional crispy batch of latkes adapted from a Mark Bittman NY Times recipe. Aside from apple, the latke contained ingredients you'd expect from your average family Hannukah party (olive oil, potatoes, and onions). There was also a variety of pro chefs and caterers like Jason Rees of the sacrilegious Pork Ninjas BBQ team who, instead of just using traditional olive oil, improvised with duck fat and beef tallow stock thanks to a prime rib order he received that morning. Added to the potatoes were beets and carrots, and in a final coup de grace, they were imbued in cherry smoke. 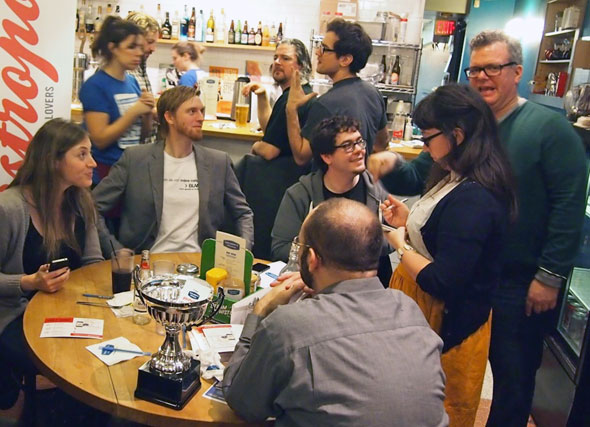 Other standout entrants were Rossy Earle of SupiCucu catering who was inspired by her Panamanian heritage, adding plantains to the mix. Surprisingly, hers were not the only latkes with Latin flare. Amateur chef David Kruger created a Mexican latke, which was more like a hefty brisket-inspired puck, loaded with cumin, beef jus, sweet potato, coriander, and chipotle, then accessorized with roasted jalapeno, lime juice, sour cream and a Mayan habanero apple sauce.

From Central America, we were taken to Korea of all places thanks to amateur giant pumpkin grower Marc Levy, who did it all for "the love of latkes," replacing standard potatoes with Korean golden Yams found in the Korean supermarket he frequents. His Jewrean (Korean and Jewish) blend came out flat and crispy, with tendrils of green onion seen in the yellow flesh, emulating the traditional Korean Gahmja Jeon. 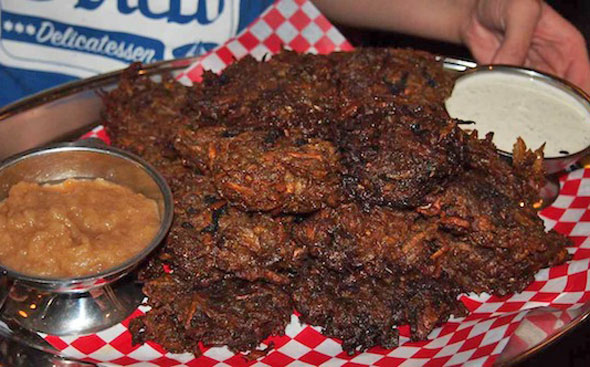 And then there was Ellie Callahan (manager of Thundering Thelma, Caplansky's roving food truck) who whipped up her very first batch of latkes especially for the event, improvising on a recipe she found in a cookbook, ironically, an early Christmas present.

It seems like the spirit of Tevya (of Fiddler On The Roof fame) was present that night because despite the many new school entries, it was tradition that won in the end. Professional caterer and real life bubbie Phyllis Grossman of Grossman Catering took home the golden trophy with her purist rendition of the classic recipe. "They're just flour, onions, olive oil, salt, pepper and matzah meal. You squeeze the shredded potato to drain off the starch, and that's it! We were up at 6 a.m. frying latkes today because we had an order for 200," she told us. 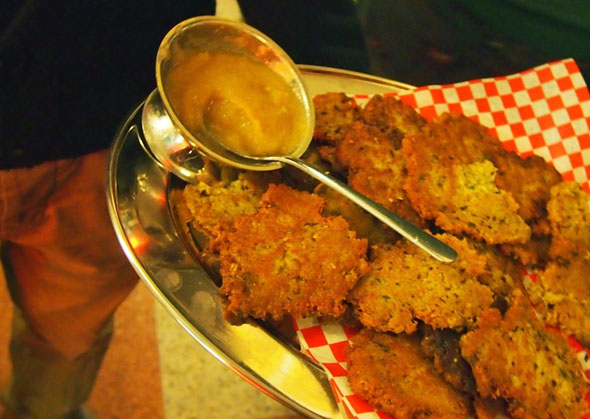 "It was kind of heartwarming to see that happen," said Zane, who was also a bit surprised by the conservative win. "You've got the new guys with their newfangled latkes, but it was the tried and true that actually took the day. It was a classic, simple, latke recipe."