The Green Room is open again

The Green Room is open again, as confirmed by a brief phone conversation with an employee shortly before 3 p.m. today. News of the bar's reopening broke when a somewhat cryptic note left on Reddit Toronto late last night indicated that the popular Annex hangout was back in business. On hearing this report, I promptly checked the restaurant's DineSafe record, which, lo and behold, shows that on February 17th the establishment was inspected by Toronto Public Health and received a full pass. 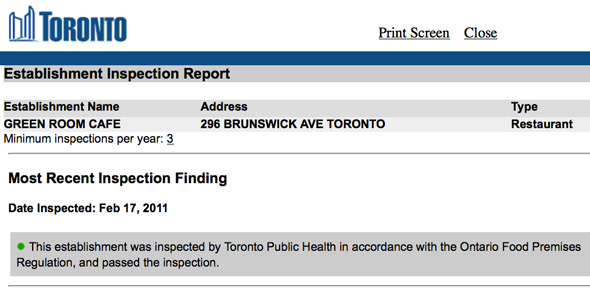 According to the note on Reddit, the Green Room reopened Friday the 18th, which the employee I spoke to moments ago confirmed. Torontoist reported back on October 15th, 2010 that the restaurant had been closed for good when its putative new owner Dat Nguyen Au failed to convince a Toronto Licensing Tribunal that he wasn't a front for the former ownership of establishment, but it would appear that something has led Municipal Licensing & Standards to have a change of heart.

This new information still leaves us with more questions than answers. Although the Green Room is once again open, how exactly this came to be and who exactly owns the health violation-prone bar remains unknown. Needless to say, however, we're working on getting more concrete information and will provide an update as soon as we can.

For those interested in checking out the new Green Room, I'm told they'll be open around 6 p.m. tonight. 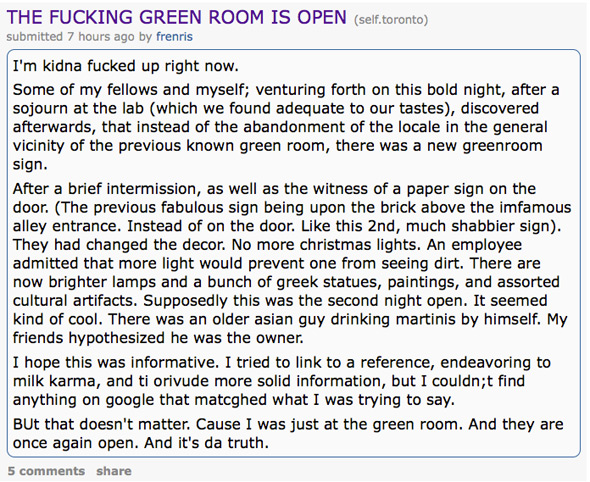 Note: this article was updated at 3:00 p.m. when we were able to get through to the Green Room by phone.