Is one of these Toronto cafes the next Starbucks?

There's a specter behind the shoulder of the Toronto cafes that have expanded in the last year into second locations. It's green and black, and can be found almost everywhere - often within a short walk of these burgeoning mini coffee empires. Starbucks is the coffee shop we love to hate. But are the enterprising entrepreneurs behind such burgeoning indie coffee chains as Dark Horse, Crema or Lit Espresso Bar fashioning themselves as the next Howard Schultz?

"Let's face it, we wouldn't be here without Starbucks," says Billy Dertilis, one of the trio behind Red Rocket, which recently expanded from its cozy original location on the edge of Leslieville to a second spot on Wellesley Street. "Starbucks is the industry reference. If an independent coffee shop doesn't look toward it for inspiration, it should - just like a new donut shop should look toward Tim Horton's, or a new clothing retailer should check out H&M."

"All that said," he adds, "by overextending itself and losing sight of its original principles of quality and service, Starbucks has given the independent Coffee Shop the opportunity to chip away at its clientele."

"I haven't spent a lot of time analyzing what Starbucks has done," insists Geoff Polci, whose Junction coffee shop Crema recently opened up a tiny new location right near Yonge and Bloor, sharing a storefront with an outlet of "fresh food fast" chain Freshii. "I know they went from more of a quality focus, they expanded rather quickly and it definitely thinned out the brand a little bit." 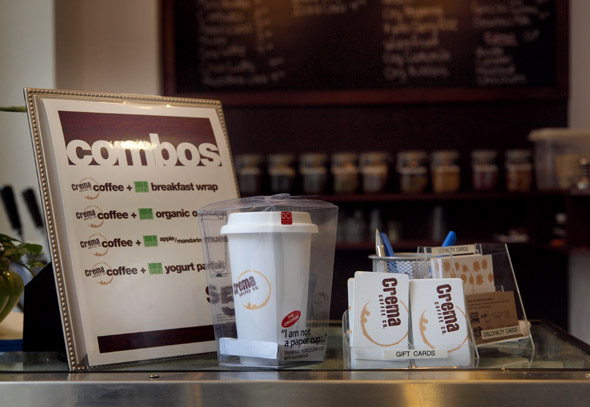 What our homegrown coffee entrepreneurs all agree on is that Starbucks made branding king. "I think branding is one of the most important things," says Joe Angellotti of Lit, who expanded a few months ago from Roncesvalles to College where the new cafe is run by his sister. "We've been trying to do it right from the get-go, even with my Roncesvalles location. We had t-shirts made as soon as we were open, we did flyers in both neighbourhoods when we opened up."

Like Dark Horse, another burgeoning mini-chain, none of these expanding coffee empires have opened up competitively close to each other, but a battle of the mini-chains might be brewing in the future, since all of them admit that expansion was always in their plan. "My plans were always to expand and I think that's probably the case for a lot of people," says Crema's Polci.

"Our plans for Red Rocket Coffee are huge," echoes Dertilis. "For now, the second location is the perfect opportunity to further define our concept: what is the overarching brand? How does that branding adapt to specific neighbourhoods? How do we strike the right balance between the allure of the independent coffee house and the consistency of a chain?"

Lit's Angellotti adds that, above everything else, quality control is his biggest problem, as it's the area where he thinks indie chains, regardless of their size, have the edge over their well-financed, highly branded international competition. "The hardest thing is quality control, and that's what i'm focusing on myself. I'm going from store to store working with every employee trying to stay on top of the quality. That's why I'm not thinking of opening a third store right now, because you need the right people working for you."

Editor's Note: When asked, owners of these cafes declined to specify how big they believed the market opportunity is in Toronto (ie. how many locations, or how large, they think they can grow and instead offered comments like "just wait and see"). Not discussed in this article are other local cafes that are currently operating two or more locations such as The Grinder, I Deal Coffee, B Espresso, Ezra's Pound and Savoury Grounds.