Facing the long, grimy chill of February, it's hard to imagine why anyone would think Toronto is a great place to sell ice cream, never mind how gelaterias and ice cream shops can survive for not just seasons but decades. It's probably a testament to a wishful thinking that helps us survive a winter that seems to last half the year, and a summer whose heyday is as brief as the interval between the buzz of the first cicada and the last ripe tomato.

At La Paloma, an anchor of St. Clair's Corso Italia neighbourhood since 1967, only one of the three gelato fridges is stocked and working, featuring the core of the shop's bestselling flavours. Owner Salvatore Giannone says that he sells more lemon and chocolate than any other flavour - twice as much right now, up to three times in the summer. In July and August the lineups go out the door and a table comes at a premium; right now I'm the only person in the shop, as a trickle of locals drop by for a chat and an espresso.

"A lot of things have changed over the years, but La Paloma still has a good name, and people they remember that this is the place to come," Giannone tells me. I order an espresso and a small cup of Sicilian Pistachio, my favourite flavour. When we moved near here last summer, we used to joke that proximity to La Paloma was a factor - a half-joke that everyone saw through. Still, despite having two small children, I haven't been in since September, and it feels odd to be eating ice cream next to a pile of winter clothing.

Down the street at Tre Mari Bakery, the gelato fridge next to the espresso machine is turned off and has been filled with boxed chocolates; at CafĂŠ Novecento - La Paloma's only major competition - they have a full menu of sandwiches and a cozy, wood-filled room to help them make it through the winter. At my table at La Paloma, I can't exactly say that the Sicilian Pistachio tastes different, but it's ineffably not the same as it was in August; maybe it's just that it takes longer to melt.

Out in the Beaches, Ed Francis of Ed's Real Scoop takes a break from making chocolates to talk about how to survive the winter. "Business is like a bell curve. January is the worst month - it's maybe an eighth of what you'd do in July. We do two things. One, we make our own ice cream and gelato and sell it in take-home containers, so that gets us through winter. We also do chocolates. December is a fairly good month for chocolates, Valentine's gives you a little hit in February, and Easter is a big chocolate holiday." 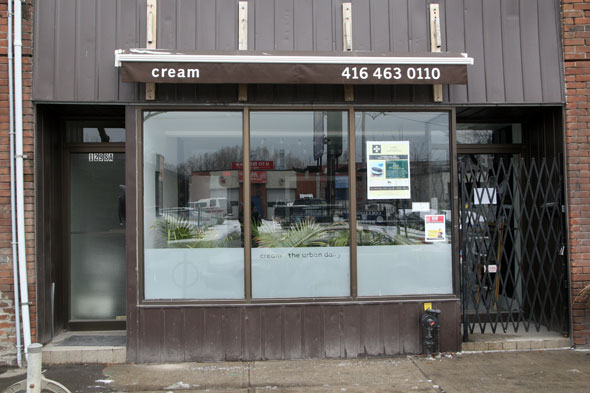 He's thought about closing for January, but he'd still have to pay the rent, the utilities, and the salary of the chef who oversees his ice cream menu. "Yes, I lose money in January, but I would lose more if I closed." Still there are other ice cream shops and gelaterias who shutter themselves for the season - The Big Chill on College and Cream in Leslieville are currently on hiatus - while there are scores of deadpooled shops (Solferino, Bravo! Gelato) who were never able to make enough proverbial hay while the literal sun shone.

Back on St. Clair, Salvatore Giannone admits that the last three years have been rough, thanks to the LRT construction, a bad economy and a summer that never really got torrid. He's hopeful, however, especially since it's a World Cup year. "If either Italy or Portugal goes on we have more profit, otherwise it's just another summer. It Italy does well, all the businesses on St. Clair will do well."