Vermin sightings in Toronto restaurants and other dining establishments aren't that rare these days. But since it sometimes takes DineSafe a bit of time to react, I thought it was worth publishing this photo that Borys Machnikowski sent us of a mouse taking a liking to the mini cheese pastries at a Warden station coffee shop called Bakery on the Go.

Looking at its DineSafe record, it appears that Bakery on the Go has a less than spotless record having been hit with a conditional pass in August for "Inadequate Food Temperature Control" and "Failure to Protect Food From Contamination".

Here's an account of events as relayed to us by Borys himself:

Last night I was with two friends waiting for another friend at Warden Station. This being Toronto we decided to wait in the warmth of the coffee shop for him rather than staying out in the cold subway station. Between our conversation in the coffee shop I managed to spot a mouse chowing down on the mini-cheese rolls and pointed it out to my friends and the two other customers in there with us. I snapped a picture of the little offender without hesitation.

Here's where things get disgusting: the coffee shop continued to operate! Many people came in to buy baked goods and while the employee removed the mini-cheese rolls from the bottom rack he didn't remove everything around it and continued to sell people food even after we told him about the mouse and showed him my picture. Being thoroughly disgusted we decided to warn everyone who would listen that we just saw a mouse in plain sight and showed them the picture each time. They were grateful they hadn't eaten what they had bought yet.

That's when the employee, who had not said a word to us, called his manager to come in.
Between waiting for the manager coming in he was still selling people food! Finally, another man came in and we continued our mission to warn people. We told him about the mouse and he said "HUH? This is subway station. You see mice sometime. So WHAT?" in an irritated tone. Then we showed him the picture and his face froze. It turned out he was the manager and he promptly told us to get out, but we didn't until they turned off the lights and closed the store for fear they'd continue selling food to people while there was proof of the mouse eating it while customers were there (plus our friend still hadn't arrived).

I have sent an email to DineSafe to alert them of the problem and am currently awaiting a reply. Frankly, I am not only disgusted by the hygienic issues of the coffee shop but their business practices as well. The manager was very rude and hostile when talking to us and the employee seemed like he simply wanted to remain blissfully ignorant to the mouse encounter to cover his own ass. I will not be purchasing anything from that coffee shop again and am now skeptical of all those other 'convenient' coffee shops in the TTC system. Let me know if you would like to hear from me once I receive a reply from DineSafe. 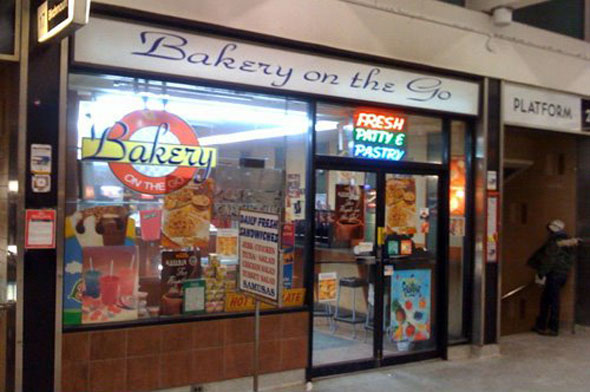