Toronto is no Montreal when it comes to corkage (aka BYOB or bring your own booze) programs at restaurants, but the good news is it's getting better. Over the last few years, many establishments have decided to offer corkage options, which is certainly a good start. The problem has been, however, that at most of these places the high corkage fees discourage customers from actually bothering to bring their own stuff.

I, for instance, won't bother bringing my own bottle if the corkage is over 25 bucks, even if it would still constitute an overall savings on the price paid for that part of the meal. For some reason, I just can't justify paying that much or more for someone to remove a cork and provide stemware (which a lot of the time isn't that good anyway).

But with the recession still hitting restaurants, corkage fees are on the decline. Not only that, a number of eateries have decided to waive them altogether on certain traditionally slow days in order to stimulate business. So, in light of this exciting development, I've put together a list of some of the best BYOB options in town.

Madeline's
One of the best corkage deals in the city, throughout the summer Madeline's is charging a measly dollar to open your wine Monday through Wednesday. Having yet to try out this installment of Susur's mini-empire, this is just the incentive that I need to make the trip. It's nice that it's over a few days of the week as well.

Lee
Just next door on King West, the same deal applies. And here it might make even more sense. Having dined in bigger groups a number of times at Lee, the multiple bottles of wine always took a bite out of our wallets. For the time being, however, there's some pretty significant savings on the table.

Globe Bistro
Throughout the month of August, this Danforth eatery has eliminated its corkage fee altogether. Now this is progress! I can only hope that it extends beyond the summer (but no word on that at present). And with nice stemware, you know that your bottle will get the proper treatment.

Nota Bene
For those who don't mind dining a little on the late side, Note Bene's offer of no corkage after 9pm will surely meet with some smiles. They want a second seating; we get to BYOB for free. Sounds like a fair deal to me.

Table 17
Though it's only on offer on Sundays, this Leslieville bistro is also getting in on the fun by dropping the corkage fee to zero once a week.

Cava
Another Sunday deal, Cava also offers no corkage for late weekend diners. Perhaps Sunday isn't the most desirable night to dine out, but a stop at the LCBO on the way to the restaurant for an early dinner makes sense to me.

Bloom
Not to be confused with the cafĂŠ of the same name, this bistro in Bloor West Village charges 5 bucks for corkage on Tuesdays and Wednesdays.

Jam CafĂŠ
Corkage is free on Sundays, whether your wine needs the basic treatment or some TLC in the form of decanting. 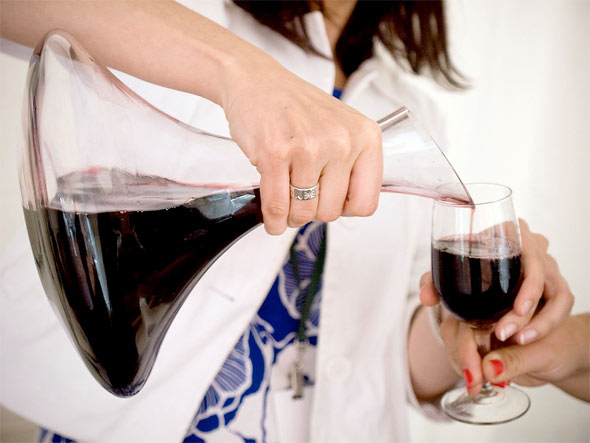 Le Select
I've taken advantage of Le Select's reasonable corkage fees numerous times. With a standard rate (every day of the week) of 18 bucks, you can buy a pretty good bottle from Vintages and still keep the costs down. If you want the nice glasses and the wine to be decanted, the charge does however bump up to 25 dollars.

Paese Ristorante
This uptown Italian eatery offers one of the best corkage deals in the city. It's free every day but Saturday. There are minor restrictions in the form of a 25 dollar charge for a second bottle (so bring only one!) and the fact that this isn't offered in conjunction with other specials.

Old Spaghetti Factory
What better way to wash down your meatballs then with a bottle of Chianti? At a scant ten dollars, I'd pretty much always bring my own to this Esplanade spaghetti house. Not only do I save a few bucks, but I get to choose from a wider selection than the restaurant's own list.

Universal Grill
Under the name of 'Saloon Sunday's,' this Dupont and Shaw grill waives the corkage fee with the purchase of a main course. A nice bottle of Australian Shiraz is an exquisite but not overly expensive way to wash down their excellent ribs.

Le Petit Dejeuner
A well-priced food menu doesn't always ensure a cheap bill. But with a standard 15 dollar corkage fee at this oh so French bistro, it's easy to keep a cap on the prices and off of your vin.

River Restaurant
Departing from the Sunday no corkage deals, this Roncesvalles eatery kills its fee on Tuesdays. And, at ten bucks the rest of the week, it's not particularly pricy at any point.

Fresh
I don't always think of paring the healthful food at Fresh with wine, but that's not to say I wouldn't. At a reasonable ten bucks for corkage, it's possible to do the heart doubly good by adding a little red wine to the meal.