Toronto's regional transit network could have looked much different in an alternate timeline, and one high school student from Hamilton has visualized how the GO Transit system may have looked in a reality where every single proposal played out as first envisioned.

William (who prefers to be identified by first name only), a 16-year-old student with a passion for transit and graphic design, created a map that depicts what the GO Transit network could have looked like if all projects proposed since 1965 had been realized. 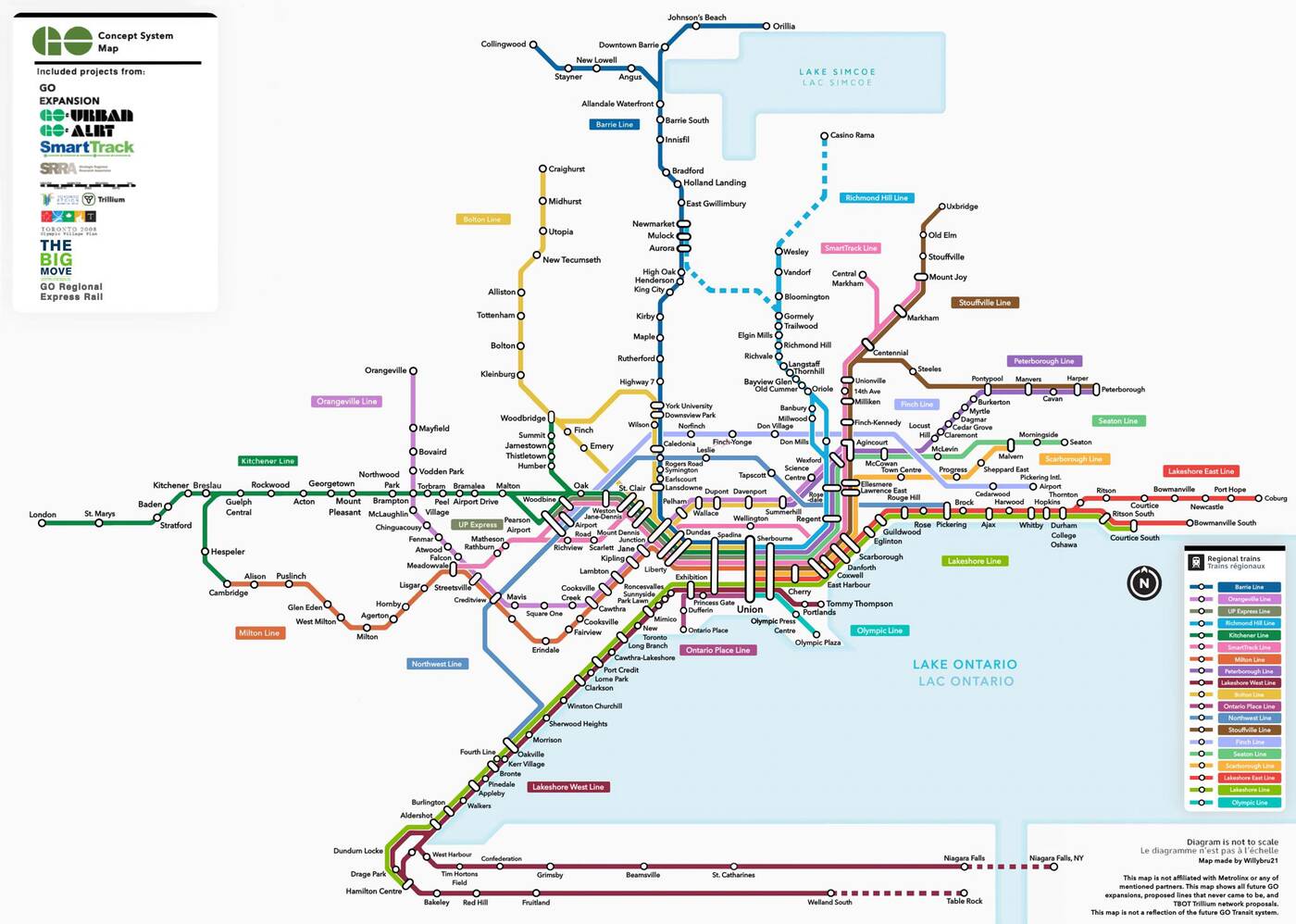 William tells blogTO that the "what if" map was a labour-intensive process of finding proposals and rearranging the design several times to make everything fit to scale.

"Some of the proposals and projects I discovered were very obscure projects I had never heard of before," he explains.

"This includes a line going to the planned 2008 Toronto Olympic Village grounds from Union Station, a line following a hydro corridor along Finch Avenue in Toronto connecting northern Toronto with the never built Pickering International Airport, and lines connecting popular attractions such as Casino Rama, Ontario Place, and a more direct line to Table Rock in Niagara Falls."

This could be the first modern regional transit map showing an international connection, with William saying that "one proposal was an extension beyond Ontario into Niagara Falls, NY, which would have been the first international commuter rail line in North America."

The map includes lines that would have radically altered the look of transit in Toronto. William discusses projects like a dead proposal for an Ontario Place Line, "planned to be built with new experimental technology under a project called GO Urban."

"Others were planned to be electrified with GO ALRT technology, which resembled the soon-to-be-closed TTC Scarborough RT, however, most lines were going to be built with conventional rail technology."

In a rather unconventional graphic design move, he explains that he used an app on iOS called YouDoodle+ instead of the industry standard Adobe Illustrator. He used these tools to create a similar project several months ago, mapping out what the TTC rapid transit network could look like in 2035.

William was inspired to create this project with the hope of shining a light on some of GO Transit's little-known history.

He says that "using the official GO Transit map with all the old and dead projects added onto it really shows off how much the GTHA could've had, but doesn't due to funding cuts and public opposition to transit projects in the late 20th century."