As someone who openly talks about putting ketchup on broccoli, I clearly have little to care about by way of reputation. But even I wouldn't dare to venture out onto Toronto's crumbling Scarborough Bluffs, risking not only hefty fines, injury and death, but the immortalization of my stupid actions, on video, for everyone to see until the end of time.

A popular Instagram account that highlights some of the stupid things tourists have been caught doing on camera at national parks in The U.S. (@TouronsOfYellowstone) just republished a hilariously embarrassing video shot right here in Toronto.

First uploaded to TikTok last September, the clip shows no less than eight short-sighted daredevils receiving steep fines of $5,000 each for venturing out past all of the unignorable physical barriers and signs to take pictures atop the Scarborough Bluffs.

"Ladies and gentlemen, make your way over this way please, form a single line, because I have to issue you all $5,000 tickets," says a police officer in clip, as posted to the Tourons (tourists+morons) account late Wednesday.

"You guys are absolutely nuts. The Bluffs have been collapsing all morning and you guys are standing where it's unsafe to stand," the officer continues, not even mentioning the fact that dozens of people just like them have had to be rescued from the geological structure at great cost to taxpayers in recent years.

In some cases, people have fallen upwards of 15 feet over the edge, sparking complicated tactical rescue missions involving dozens of first responders.

When discussing the problem and potential solutions at City Hall in October of 2019, it was revealed that each incident at the bluffs ties up eight fire trucks, on average, usually for hours at a time.

Permanent fencing was erected in 2021, but even that didn't stop the trespassers who were put on blast today by Tourons of Yellowstone (and in turn their followers, who really seemed to delight in watching these people get dinged.) 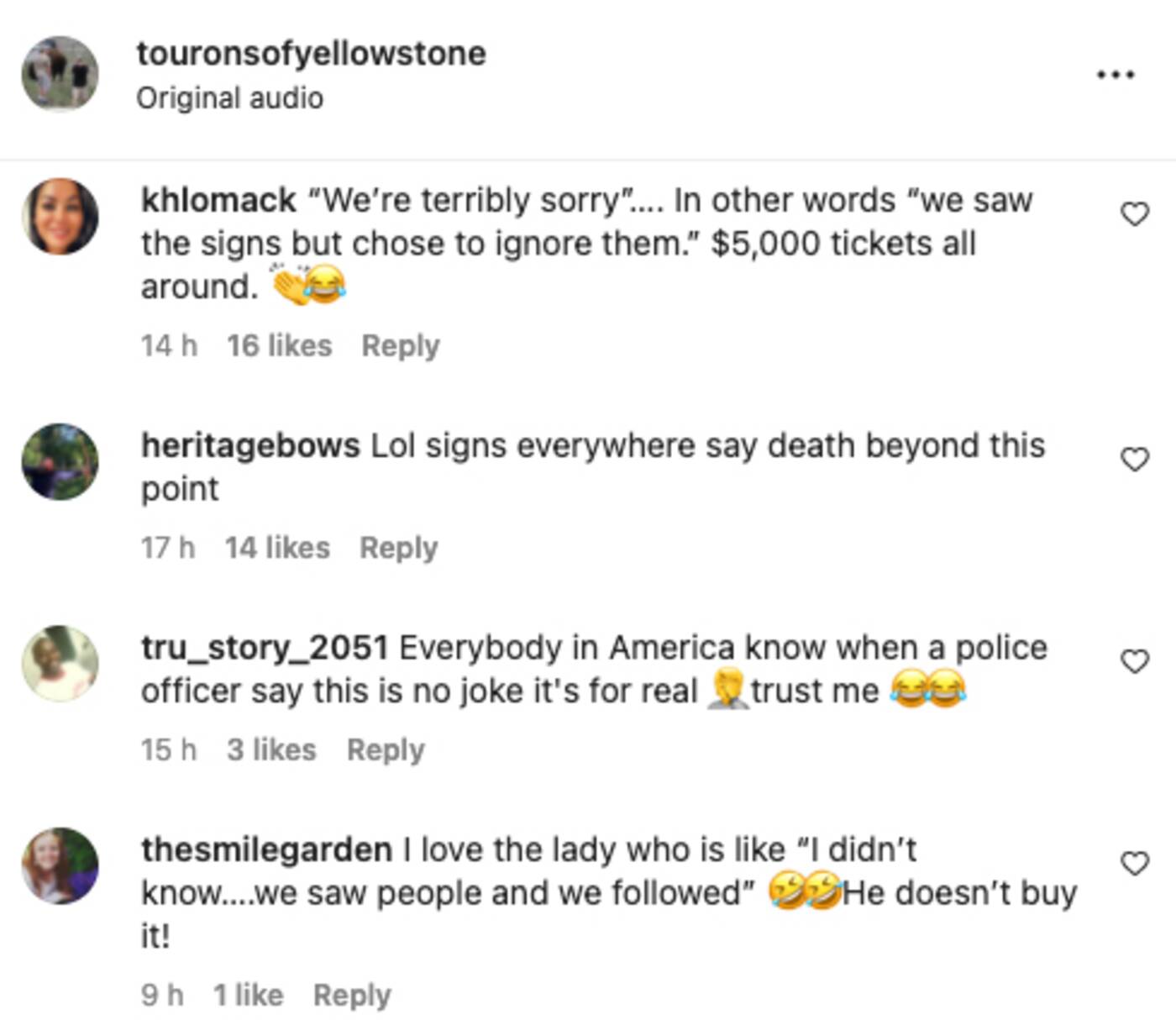 People outside of Toronto who are only seeing this clip now are getting a kick out of eight people being ticketed in one fell swoop. Screenshot of Instagram/@touronsofyellowstone.

"The Great Lakes have been at ridiculously high levels the past several years, shorelines are eroding big time, like football fields back from shorelines in some areas," wrote the creator behind the account for their many global followers.

"They're probably 30 feet + above the shoreline on a cliff made of sand and big chunks can fall off...  They have to do multiple rescues a year because people get stuck and they erode super fast. In 2018, the City of Toronto said there were 18 such rescue efforts totalling 382 hours of time that could have been allocated elsewhere."

This great caption helps non-local viewers understand how truly idiotic people are for performing this stunt (often perpetuated just to get cool pictures.)

As for those in the video, they've likely learned a valuable lesson: In a world where everyone carries cameras in their pockets, it is unwise to do risky and obnoxious things like this in public.

Still, in the end, going viral twice for getting a $5,000 fine pales in comparison to falling down the Scarborough Bluffs to a painful, rocky death.