It's been more than two years since the City of Toronto started looking into renaming Dundas Street due to its namesake's ties to slavery, and though there have been no updates since the ultimate decision to grant the road a new moniker last summer, people are still talking about how the city has handled — and still could handle — the situation.

During the early stages of the renaming discussion, residents had all kinds of ideas for what to do about Henry Dundas's terrible legacy, some of them great, and some of them less serious.

There was support for renaming all Dundas properties after former mayor Rob Ford (whether joking or in earnest), while other suggestions included simply changing one letter to make it Dondas Street, naming it after a far more deserving historical figure, or changing it to "The Restless" so we could have Yonge & The Restless Square.

Another popular proposal was to keep the name but install educational plaques about Henry Dundas's past and the fact that he petitioned against the abolition of slavery — a much cheaper option that has come up again on social media in recent days after one Reddit user saw how another country dealt with the exact same issue.

But how about actually helping these communities! A gesture doesn’t help

Though it doesn't technically have his name attached to it, the Melville Monument in Edinburgh, Scotland is indeed in honour of Henry Dundas, 1st Viscount Melville, who was from there.

Instead of changing the affiliation of the monument, though, the city has decided to add a new plaque that will explain the figure's "history, his impact on society and to acknowledge his role in delaying the abolition of the slave trade," as detailed on a sign at the monument, a picture of which was shared to the Toronto subreddit on Wednesday.

"Scotland opts for plaques instead of renaming Dundas namesakes like Toronto plans," the original poster wrote with the photo, which has garnered more than 1.5k upvotes and nearly 400 comments at the time of publciation. 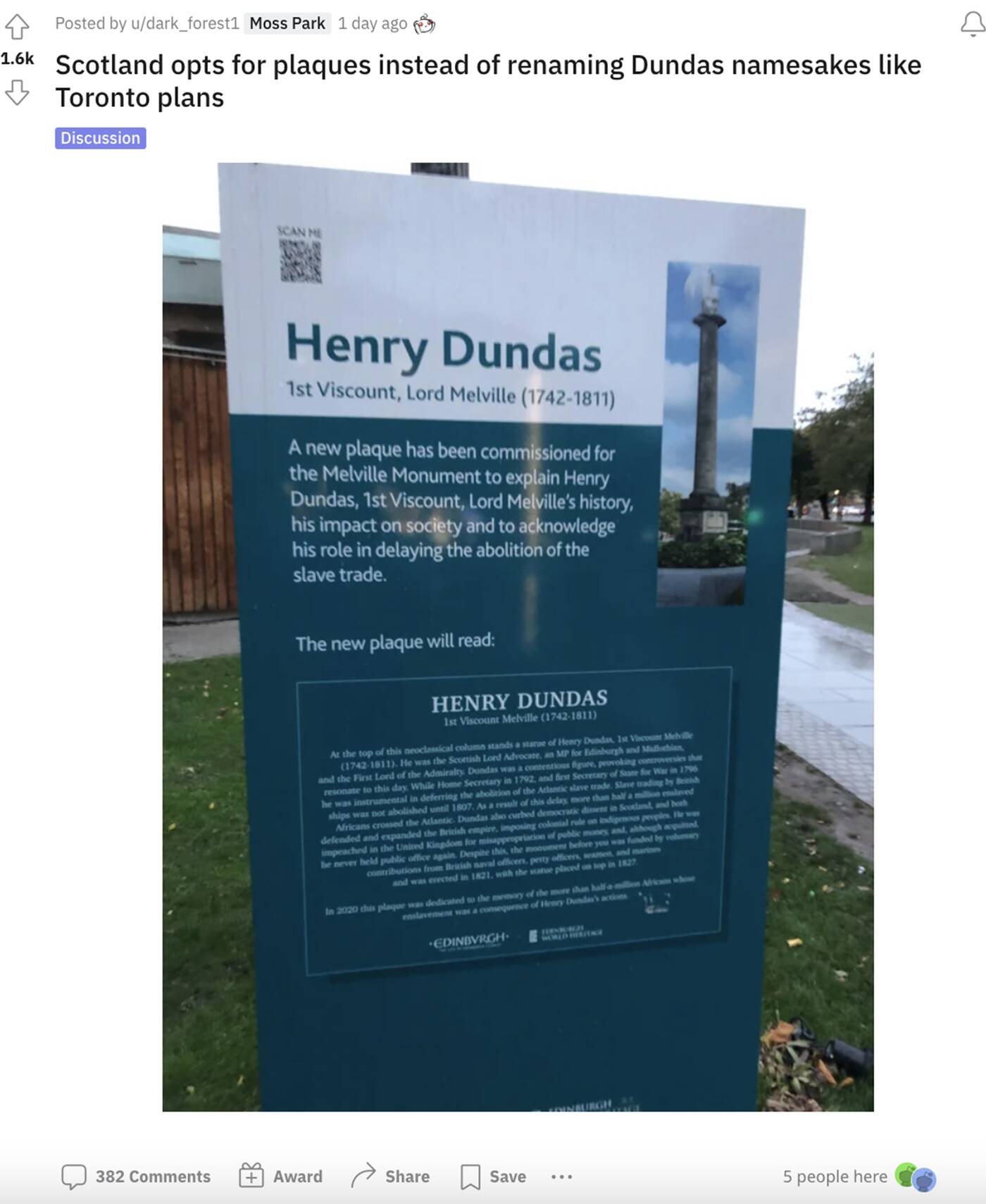 It seems that many agree that the U.K. country addressed the matter well, and that Toronto should do the same rather than spending the millions it will take to replace the names on 730 street signs, 13 park signs in three parks, a public library, a police division and a fire station, 625 Bike Share stations and Green P lots, 60 businesses and more.

Some seem to think that wiping out Dundas's name is actually, in a way, a form of erasing his atrocious history.

As one commenter said, "I like Scotland's decision. It's vastly cheaper while remaining informative and truthful about history rather than just making it disappear."

"Changing the names is erasure, even if it's just through fading to time. Keeping the names and acknowledging we made a mistake as a city is keeping history," another added.

The best thing to do is keep the street name Dundas and simply not teach kids who this bad Mr. Dundas was. I never knew it was even named after a person. $6m could go towards lower income neighborhoods and actually accomplish something

Still others think an even better idea would be to choose another person with the Dundas name to attach to the street — a "good Dundas" versus the old one, which would serve as an apt "eff you" to ol' Henry. (One user found a fighter pilot of the same last name who helped fight the Nazis in WWII.)

It is not only Edinburgh that went a different direction with acknowledging Henry Dundas's past — Mississauga city council voted at the beginning of this year not to rename their Dundas Street, either, with one councillor saying they'd rather see the money it would take to do so spent on something like equity and diversity and projects.