A Queen West business is under fire this week after its employees were caught dismantling an adjacent community space that has been a popular spot for residents experiencing homelessness in the neighbourhood to gather, socialize and sleep, especially in the wake of the pandemic.

The space was one of Toronto's first two wifi parkettes built in 2018 — the second being around the corner Queen and Denison —  for people to convene at, with even a performance stage of sorts.

But, a visit to the corner this week shows that the infrastructure has been completely torn out and the area cordoned off with caution tape, allegedly done by FYInk staff who were caught on video in the act.

According to a recent Instagram post by the Alexandra Community & Encampment Support group, the installation initially cost a whopping $450,000 as a joint effort between the city and the Queen Street West BIA.

But, "on Tuesday July 12 the owners of FYInk took it upon themselves to destroy this vital community space," the group wrote along with video footage of shop employees ripping apart the public fixtures with tools, allegedly without a permit.

There has been an outpouring of outrage across socials as a result, with one member of the community saying in an Instagram story that staff had stated they'd decided to take apart the stairs because it had become "a hospice for death that is destroying the neighbourhood." 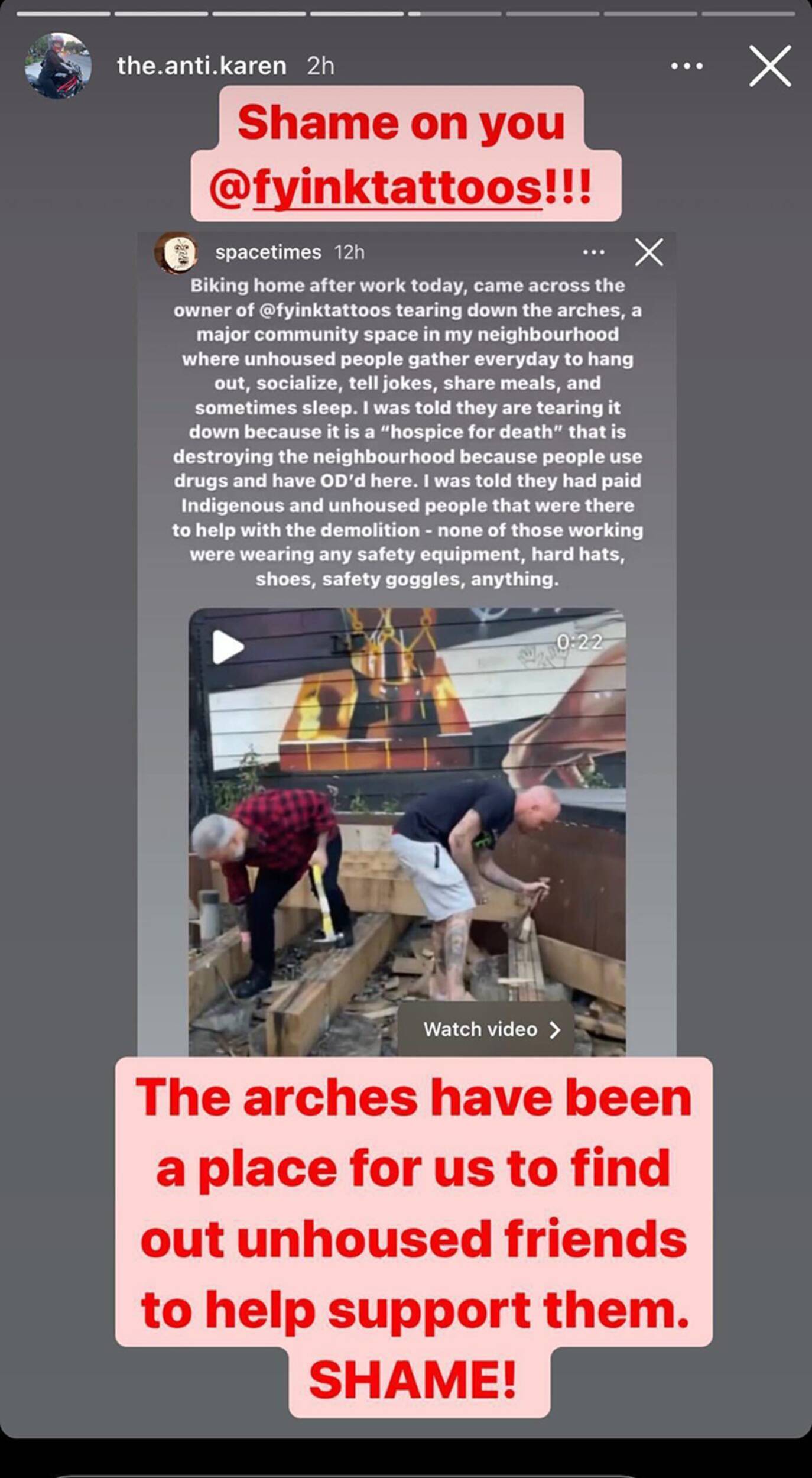 One of many social media posts expressing outrage about the shop's move to tear down the public space.

According to the city, Toronto's BIA office was unaware of the incident, and does not support unauthorized removal of any portion of the parkette.

The BIA has confirmed that this is the case, telling blogTO that the parkette is indeed slated for a redesign "to bring a new vibrancy to the area."

"Unfortunately, a fire on the parkette on the night of July 9 created an unsafe environment. It remains unclear who or why took the impetus to begin removing some of the seating ahead of schedule," the BIA continued, verifying that neither the city BIA Office nor the Queen Street West BIA approved the demolition work that took place.

The video evidence makes it clear who performed the unauthorized demolition, though.

This means that the area is now ready for the revival that it was due to get anyways, though the time and method of its destruction was not sanctioned by anyone involved in that overhaul, and the work does not exactly seem to have been done in good faith.

"The parkette has now been fenced off as construction was slated to begin shortly," the BIA says.

"With the help of the city, the area has been safely secured and we will have signage posted shortly about the upcoming redesign plans."

It is unclear whether FY Ink knew about the BIA's future plans to upgrade the space. The business did not respond to blogTO's request for comment.