Many Toronto residents know of the lost and hidden Toronto bridges tucked away in the city's buried creeks and ravines. Perhaps the most famous are the buried bridges of Garrison Creek, hidden but not entirely lost when the city filled the waterway during the early 20th century.

But a handful of other buried bridges can be found concentrated just east of Yonge Street in the blocks between St. Clair and Rosedale stations on the Line 1 subway's route north of the city centre.

Like the more well-known buried infrastructure along Garrison Creek, these road crossings still exist, though many cars and pedestrians pass over them daily without knowing they are actually traversing hidden bridges. 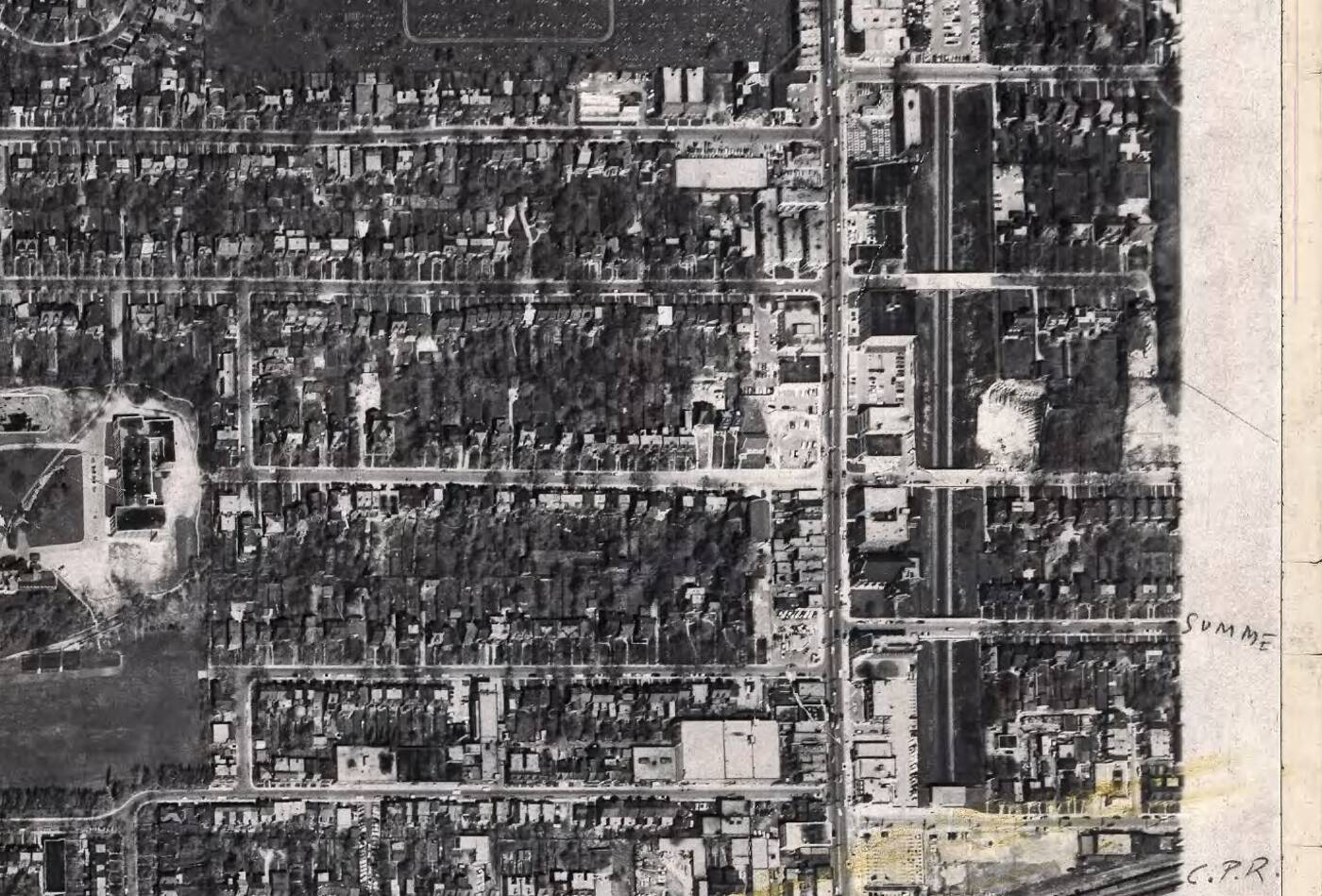 During the Yonge subway's construction in the early 1950s, the stretch between the Ellis Portal north of Bloor (that place everyone checks their phone notifications) stretching up to St. Clair station was built almost entirely open-air with tracks running in a trench crossed by several short two-lane bridges. 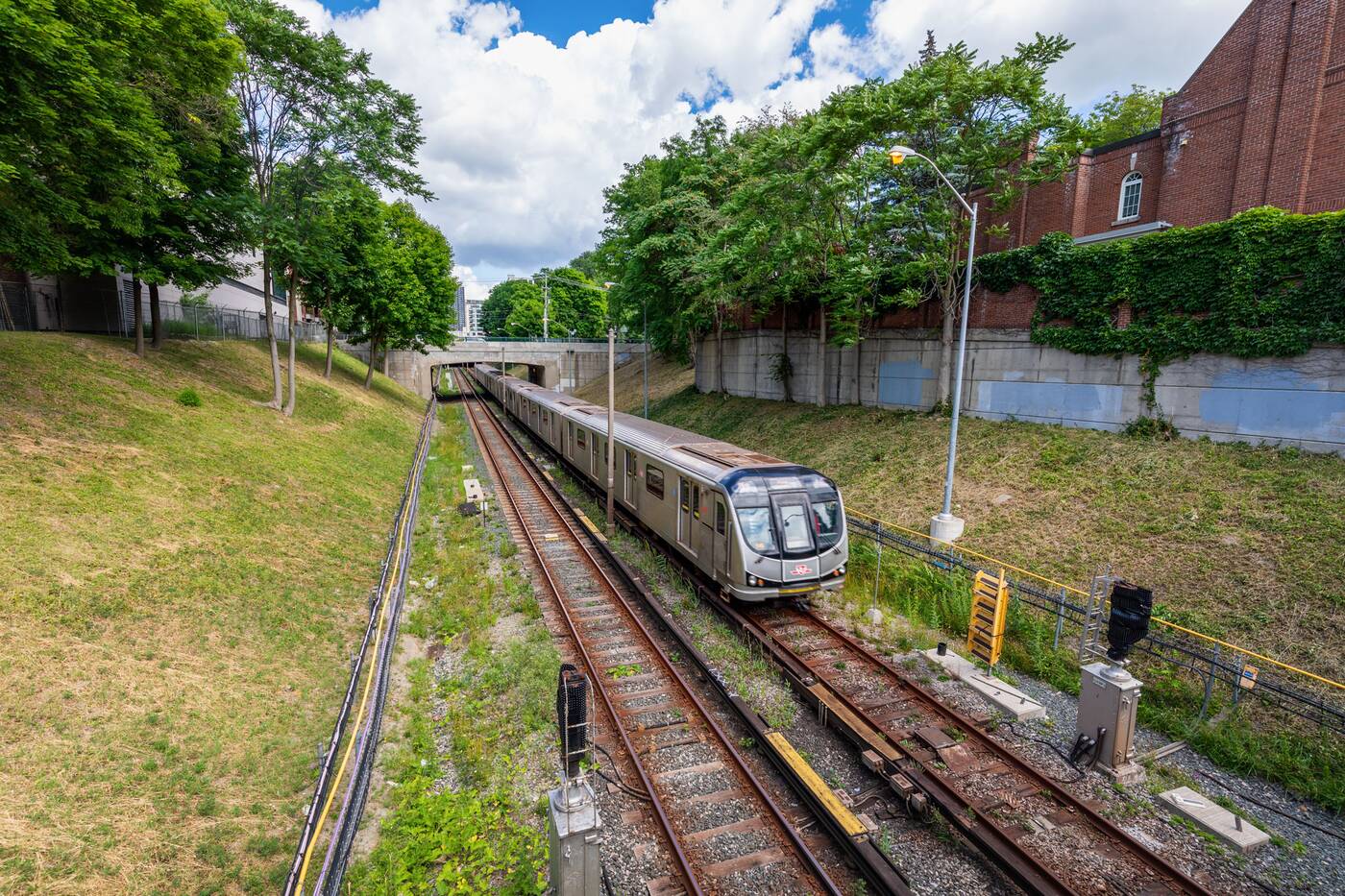 Only a brief section of this stretch — between Price Street and Shaftesbury Avenue — was constructed below grade due to the existing CP rail line, one of the few stretches of the original subway line built using tunnelling methods.

Some of these bridges still exist in their original form, crossing Aylmer Avenue, Crescent Road, and Roxborough Street East, but the rest to the north have been swallowed up by projects to deck over the subway trench in the 1960s and '70s, creating new space for parking and residential amenities while addressing frequent noise complaints.

In some cases, these bridges only existed as elevated crossings for a few years, but most still show some signs of their original configuration for those paying close attention.

The furthest south of these, on Rowanwood Avenue just east of Yonge, is only partially buried, its south end still open to the subway trench and offering some excellent views of the Bloor-Yorkville area skyline. 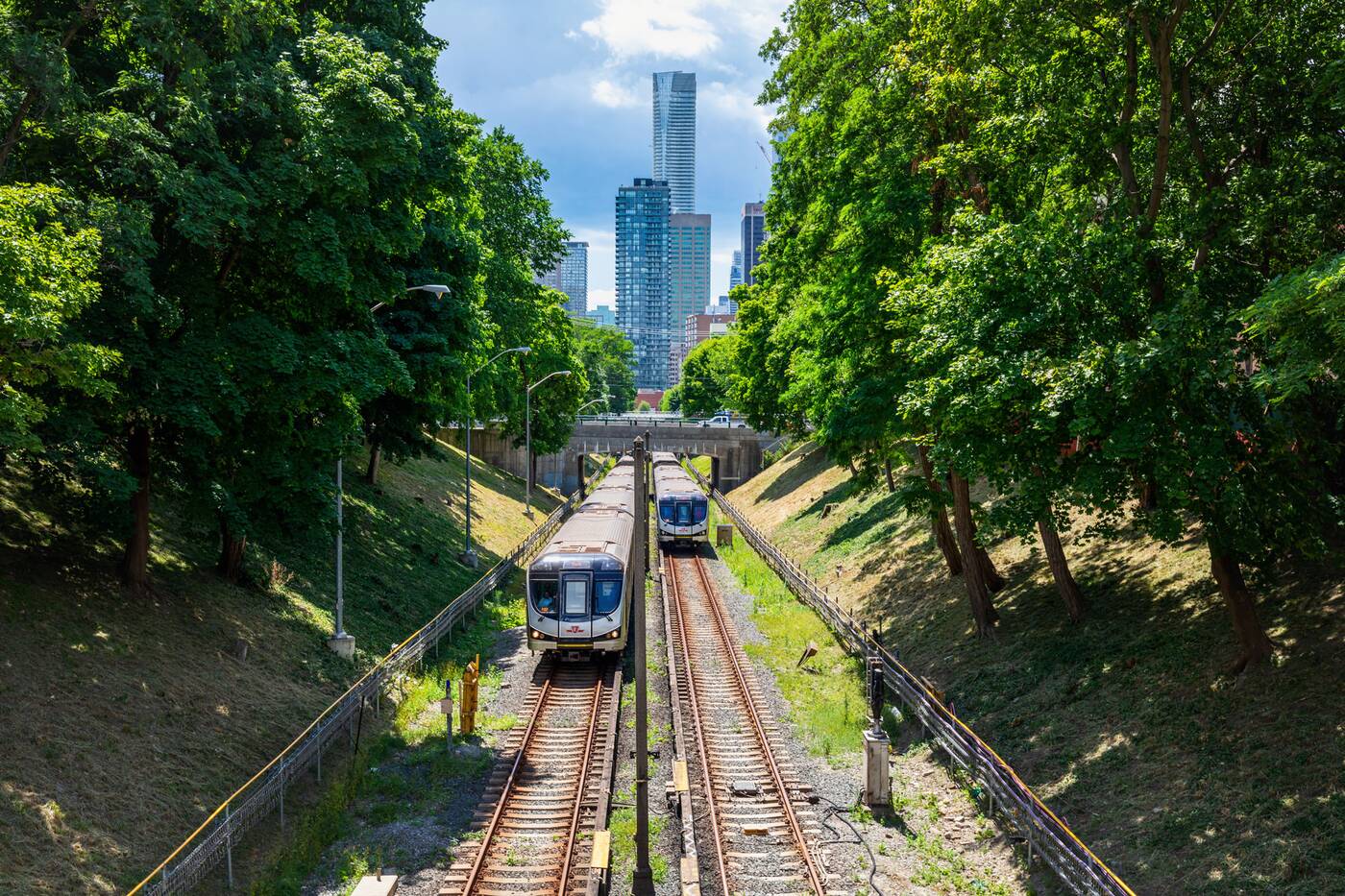 A plaque on the south side of the street marks the bridge's completion year of 1953 — the year before the Yonge subway's opening — as well as its 2016 rehabilitation. 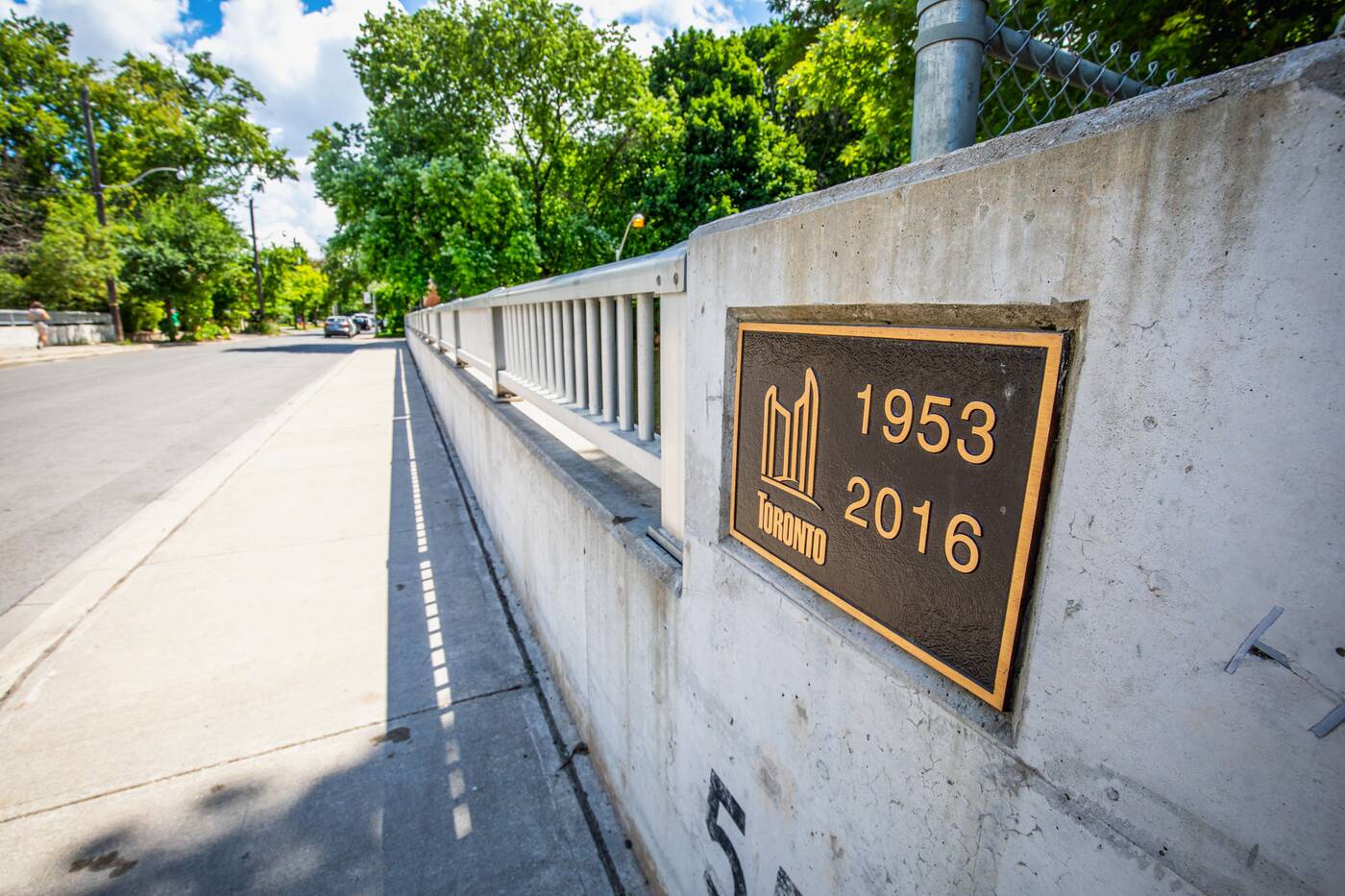 Along the north side of the bridge, railings are still in place as if to protect from a drop that hasn't existed for around a half-century, bringing us to the first set of rail decking encountered on this tour. 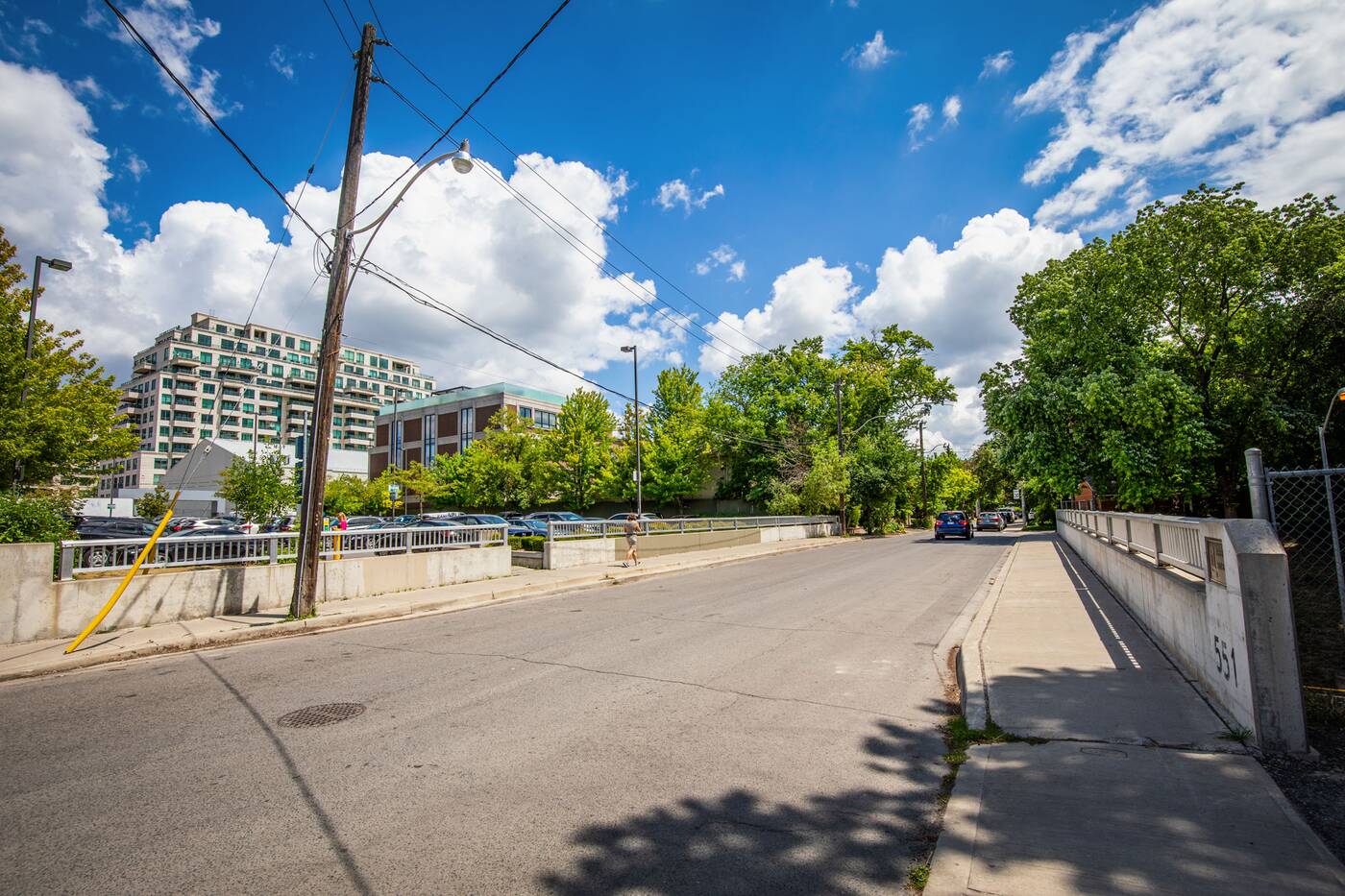 North of the bridge, an area of subway track once open to the elements is now decked over and home to a Toronto Parking Authority paid lot. A cut in the guardrail offers pedestrian access to parking where a sheer drop existed decades before. 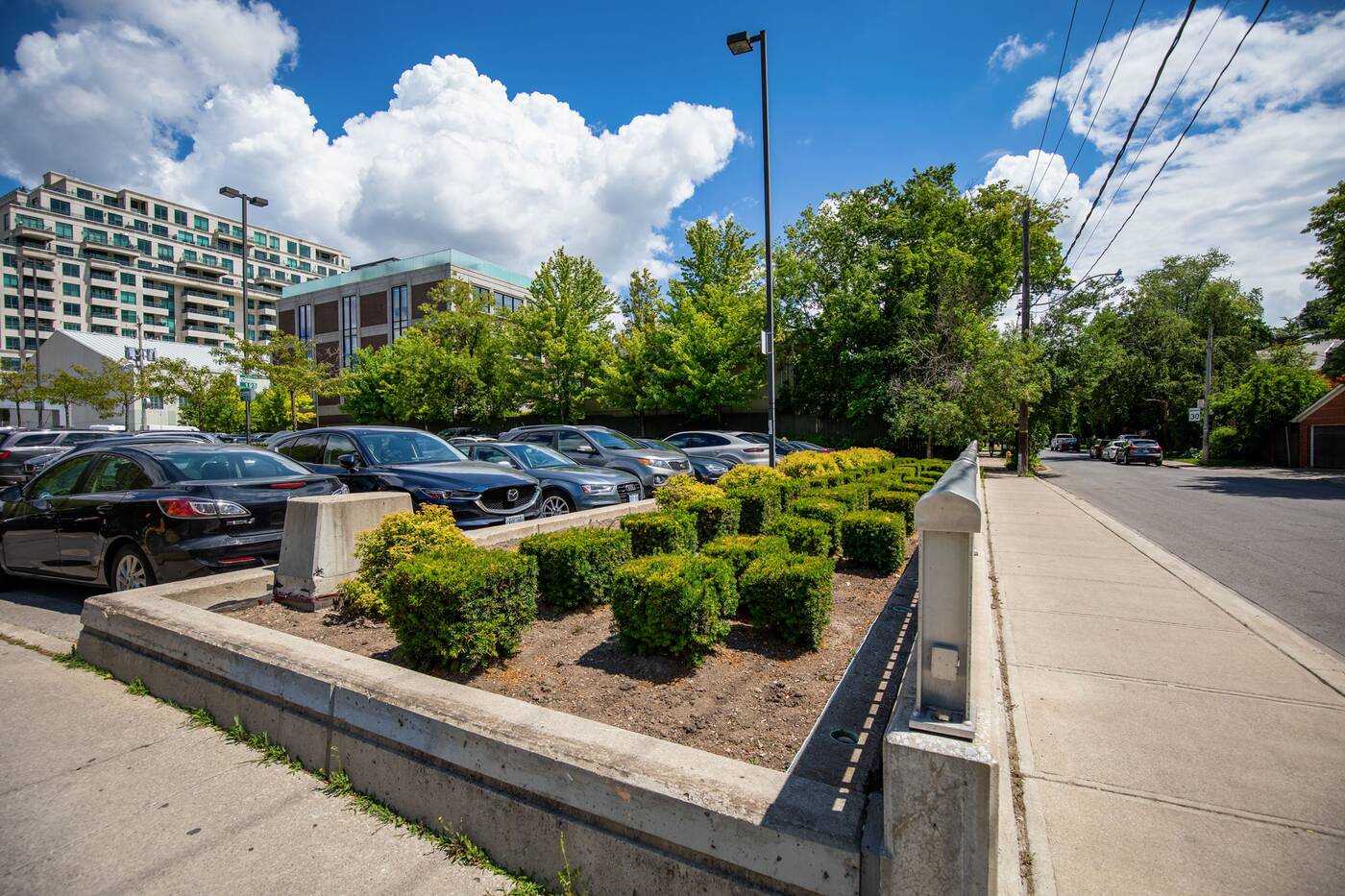 One block to the north, Price Street was home to a partial bridge with an open trench to the south and the short tunnelled stretch below the CP tracks to the north. 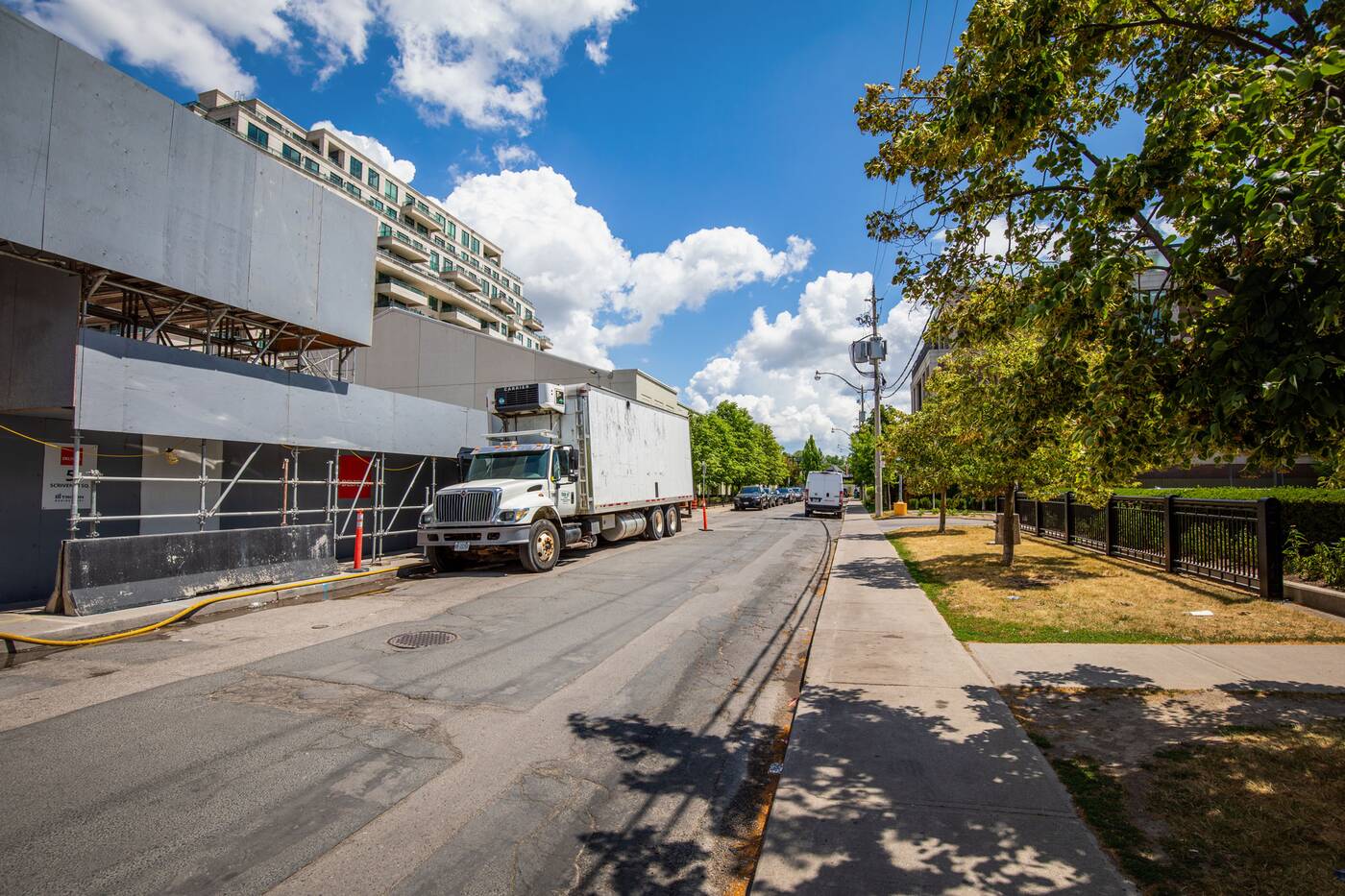 A railing still exists along the south side of Price, though instead of a trench below, the fence now separates the sidewalk and the aforementioned Green P parking lot. 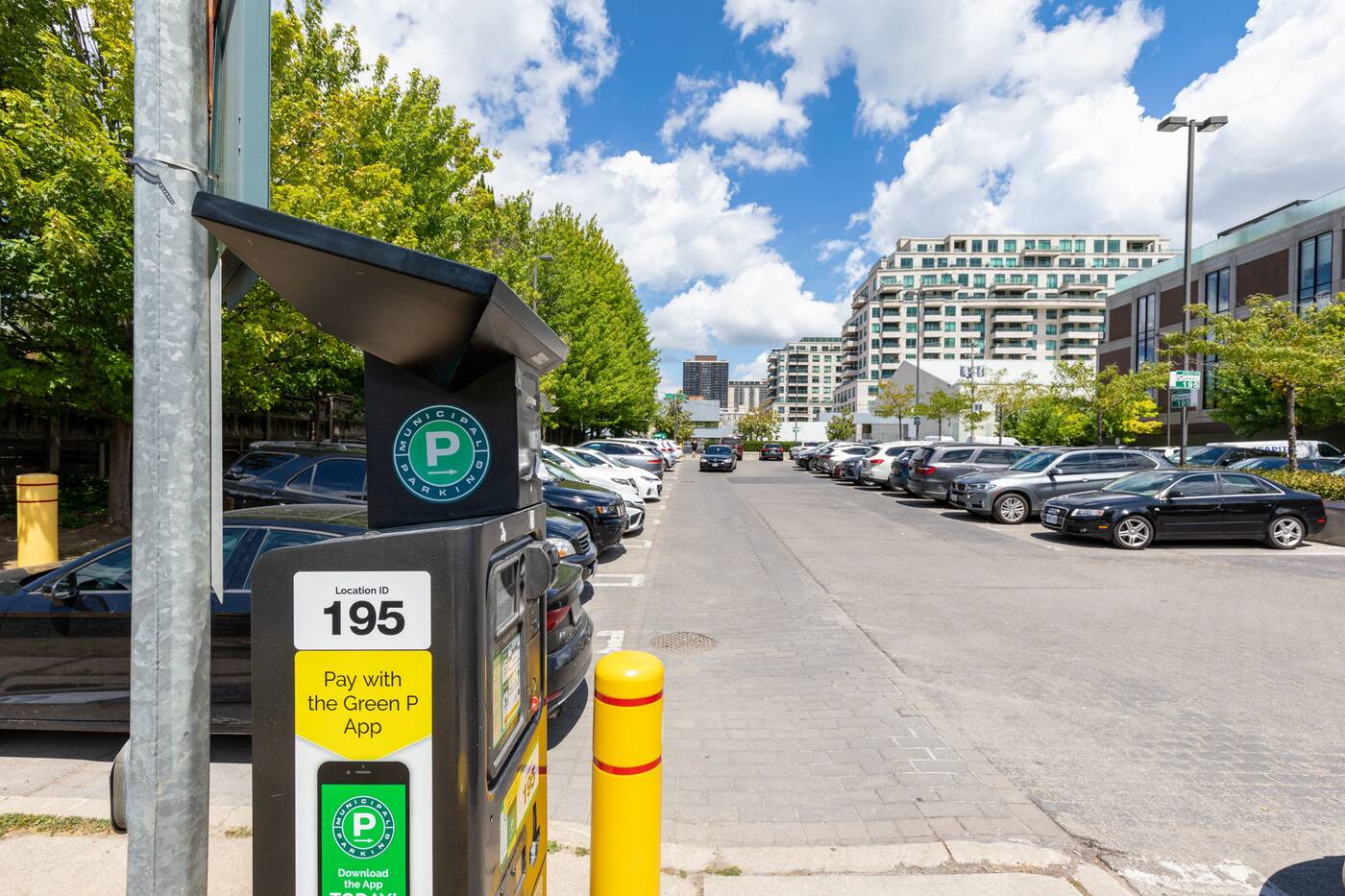 Moving north past the tunnelled section below the CPR tracks, another buried bridge exists on Summerhill Avenue dating back to 1950. 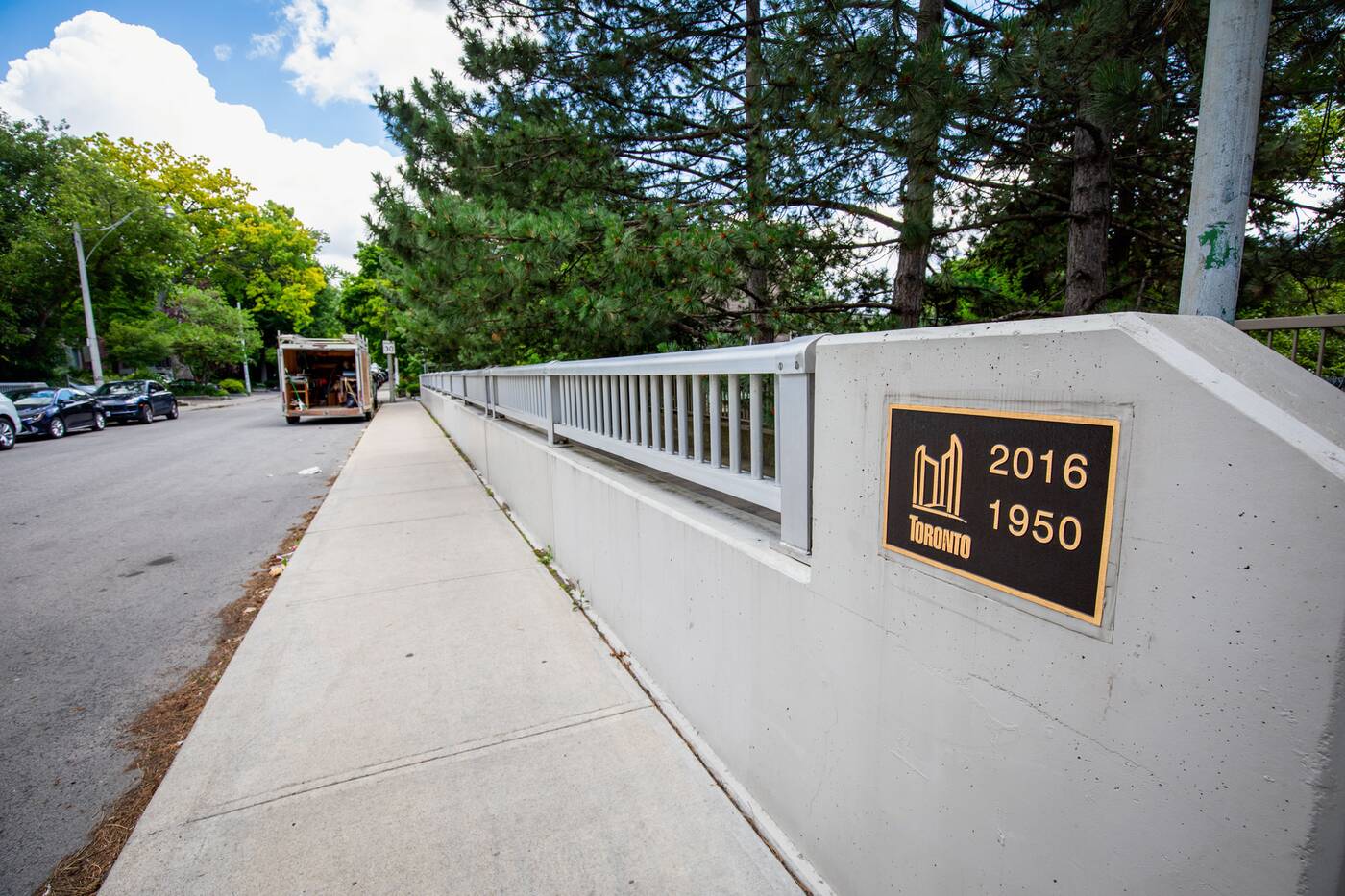 This one still features guardrails on both sides of the street, despite the fact that the bridge is completely level with the abutting residential amenity to the south and green space to the north. 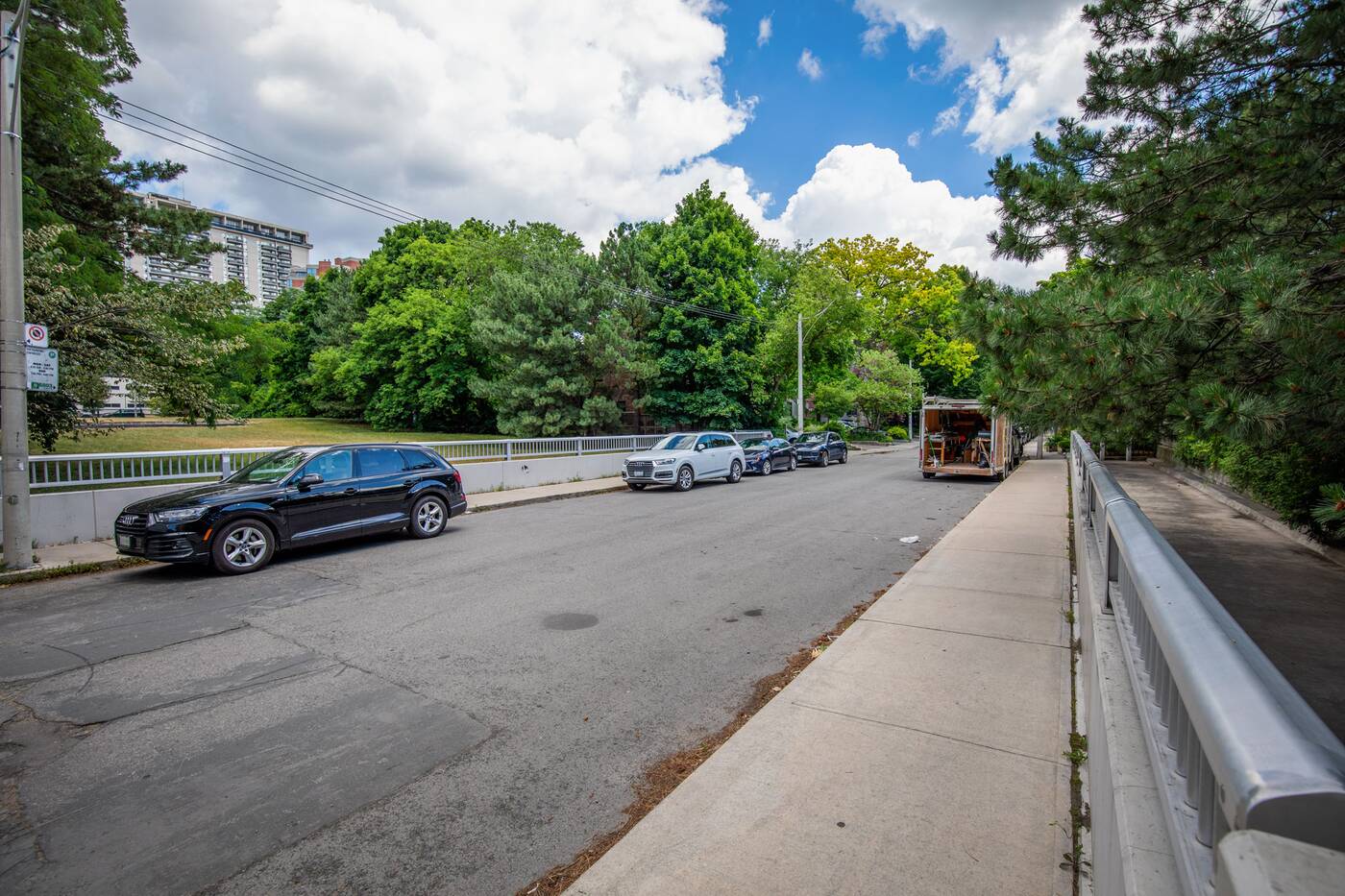 The stretch south of Summerhill has actually been decked over twice. First in the early 1970s, and then again in the 1990s when the trench was unearthed and re-covered with the current tennis courts. 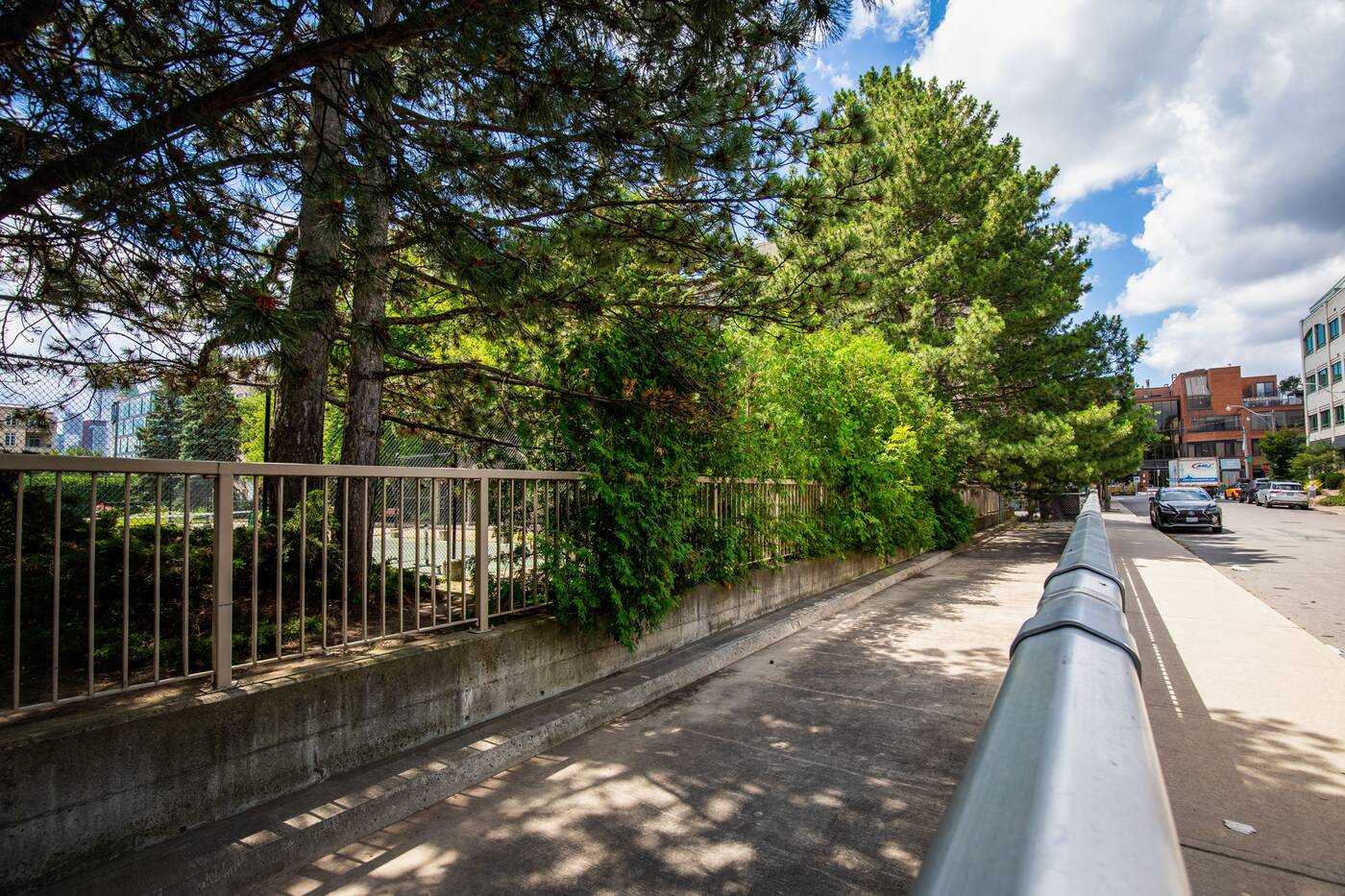 The green field north of Summerhill Avenue represents the only stretch of the Yonge line to be decked over that has not been utilized for any public or private uses.

It may be popular with fence-hopping dog walkers, but this green space is technically off-limits and surrounded on all sides by fencing. It exists solely as a patch of grass with subway ventilation and trains rumbling below. 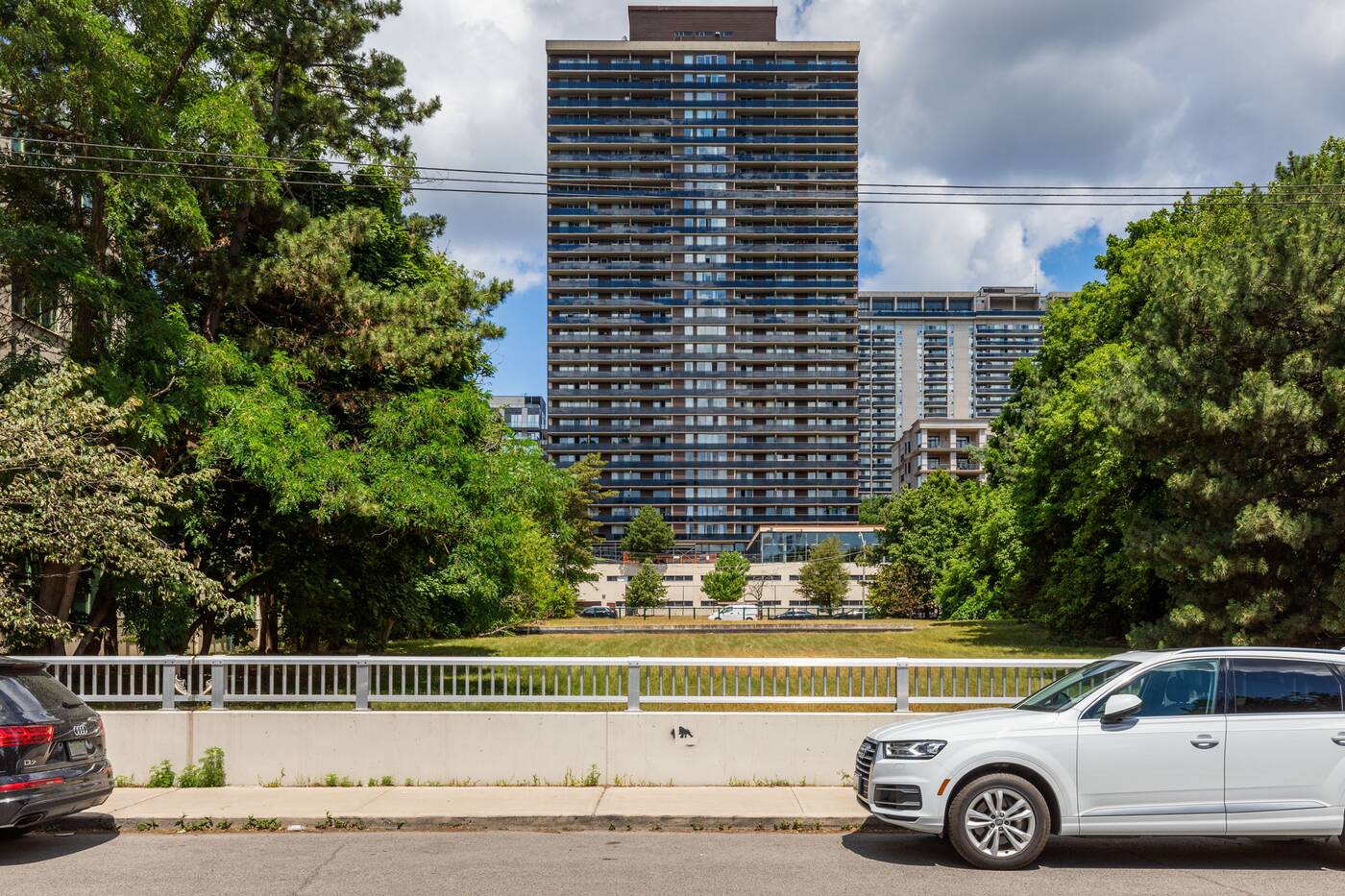 This green space extends north to Woodlawn Avenue East's bridge, which still shows a sign of its original use with a railing on its south side blocking access to the non-park. On the north side, the former subway trench is now covered by a 1970 apartment tower and even more tennis courts at 7 Jackes Avenue. 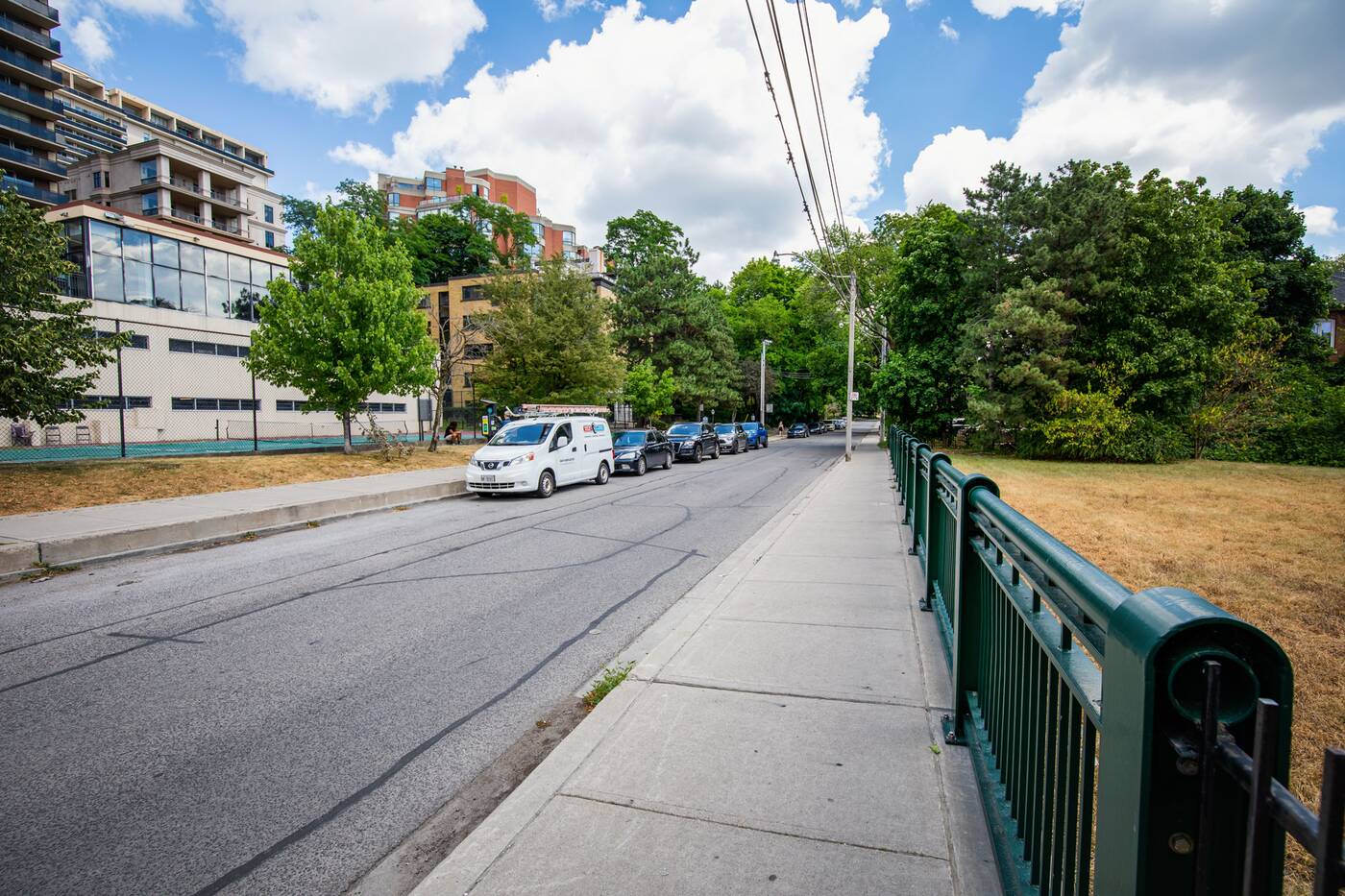 Moving north another block to Jackes Avenue, I encounter possibly the weirdest bridge on this little tour. 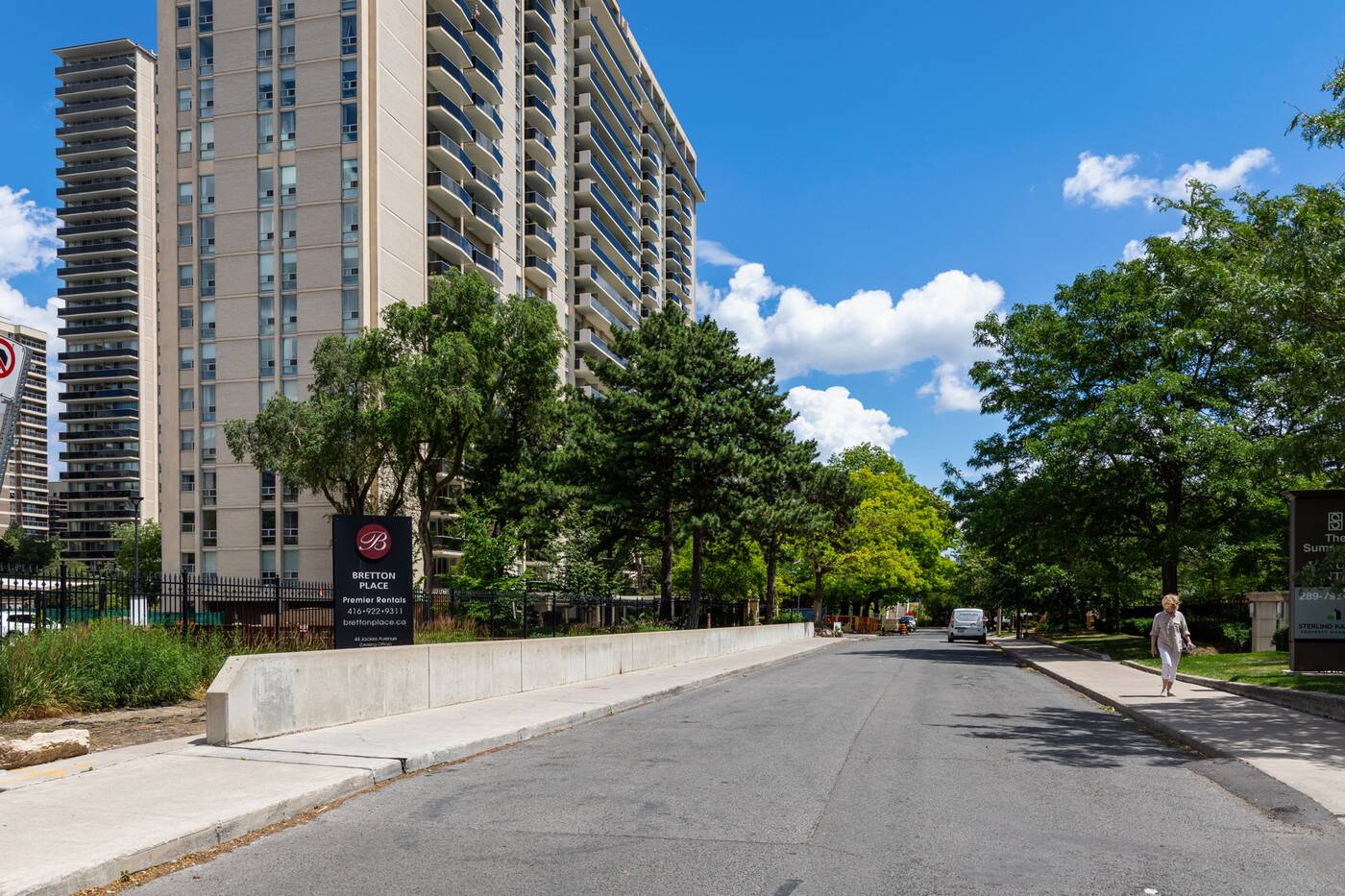 The Jackes Avenue bridge's railings were both removed after the decking of abutting rail trenches, but this complete lack of demarcation proved troublesome decades later, during the 2009 installation of a gas line.

Crews cut into the bridge thinking it was just a typical road, revealing the open subway trench below and forcing a temporary shutdown of the line for a few hours as workers scrambled to patch and shore up the hole.

A new concrete bridge railing was added in the aftermath of this mishap, and the Jackes Avenue crossing is no longer wholly concealed. North of the bridge, the decked-over trench is currently home to parking and residential amenity space. 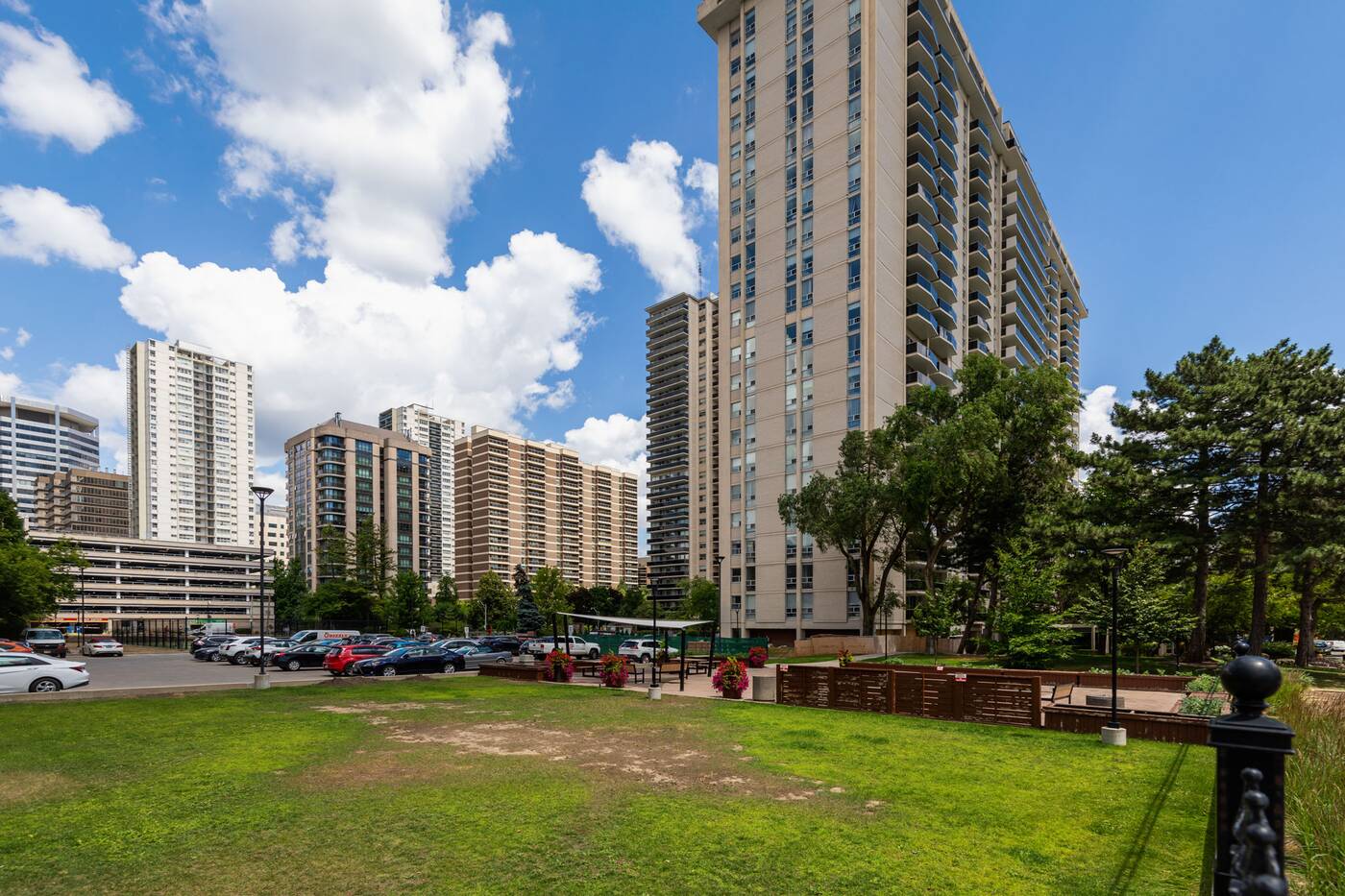 Another block to the north, Rosehill Avenue's bridge holds the distinction of being the shortest-lived of all the Yonge subway crossings, the space north of its span converted into a surface parking lot just a couple of years after its construction.

This surface lot wouldn't last long, itself replaced by a multi-level parking garage in the early '70s that still exists today. 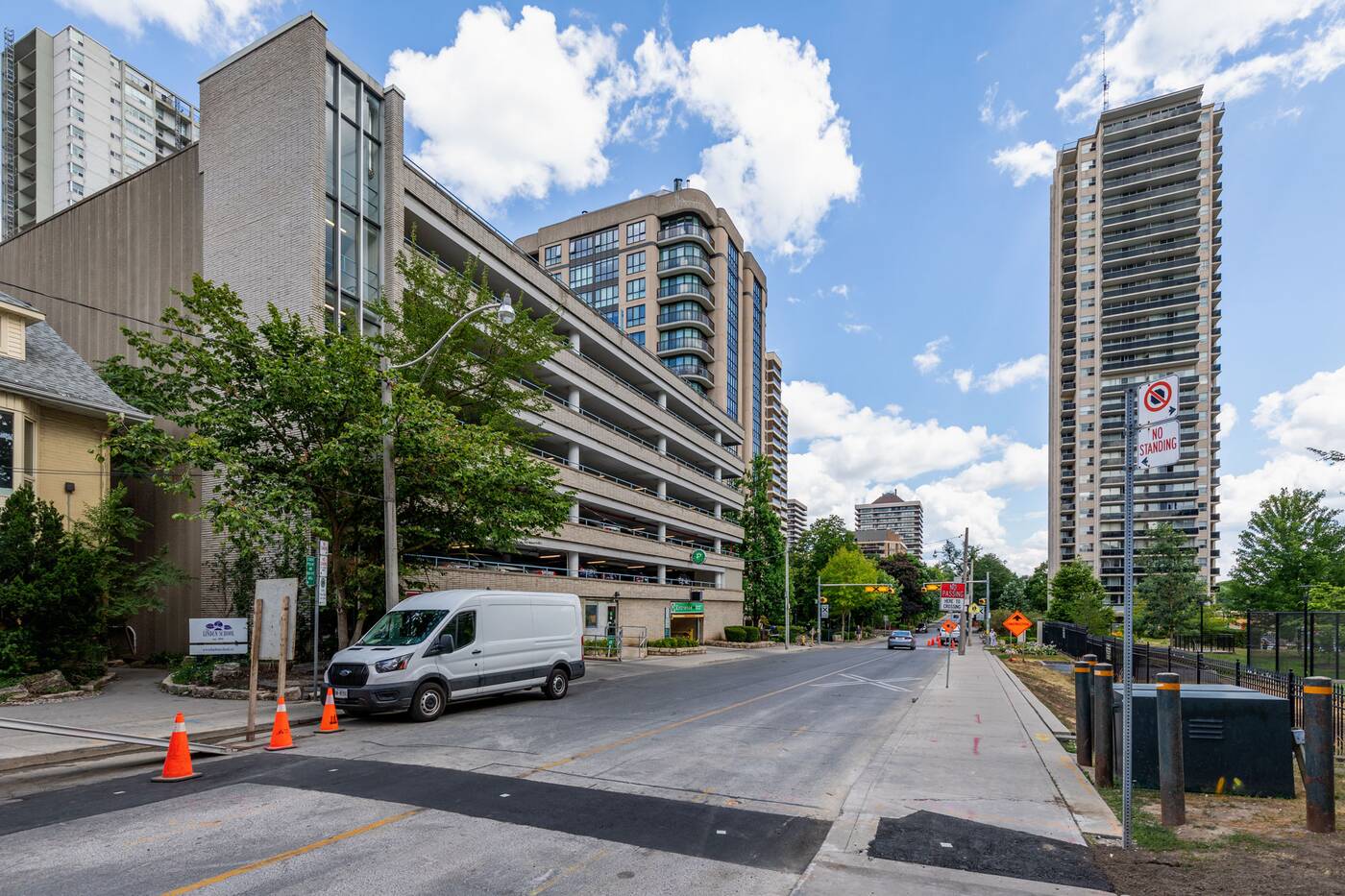 There's much to see on the surface, but even those travelling on this stretch of the Line 1 subway can get a brief (and poorly-lit) glimpse of history looking out the darkened train windows between Rosedale and St. Clair.

In addition to the long-hidden undersides of these buried bridges, you can also catch the odd tree stumps and sawed-off lampposts still visible within the tunnel decades after the trench last saw the light of day.