5 lost bridges you might not know existed in Toronto

Crisscrossed by rivers, ravines, and valleys, the terrain in around Toronto provided challenges for early bridge builders. One of the earliest river crossings was located on the Don River near the Necropolis cemetery. It was called Playter's Bridge and Elizabeth Simcoe, wife of Toronto founding father John Graves Simcoe, sketched it on birch bark in 1794. As far as can be told, it was little more than a tree trunk draped over the water with a simple handrail made out of smaller branches.

In the 120 years after Simcoe sketched wha was possibly the town's first bridge, the Don and Humber rivers and Garrison Creek (a not insubstantial flow that was once navigable by canoe) were all traversed by structures now demolished or, in two cases, almost completely buried.

Here are 5 lost Toronto bridges from Trinity-Bellwoods Park to the Humber River.

Crawford St. bridge over Garrison Creek
Not many people know it's possible to walk over a buried bridge in Trinity-Bellwoods Park. Located just south of Dundas, the Crawford Street Bridge was built in 1915 over the steep-sided ravine of Garrison Creek. Until it was all but erased from the downtown landscape, Garrison flowed southwest through the park to an outlet near Fort York.

With the heavily polluted Garrison Creek channeled into sewers, the ravine in Trinity-Bellwoods Park was filled in the 1960s using material excavated from construction of the Bloor-Danforth subway, much to the disappointment of tobogganers. The bridge was buried up to the road deck and its parapet removed, leaving almost no trace of what lies beneath save for a historical plaque. 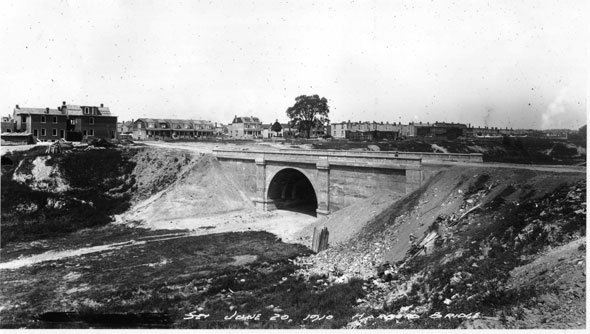 Another lost piece of Garrison Creek infrastructure, the Harbord Street Bridge was buried like its neighbour to the south (see above.) Unlike the Crawford Street span, however, pieces of the Harbord bridge are still visible. The northern parapet, shown in the picture, pokes out beside the sidewalk past Bickford Park. The matching wall on the south side of the street has been removed.

The concrete bridge structure still carries the street over the lost ravine, though it's been 85 years since it last saw daylight.

Lawrence Ave. bridge over the Don 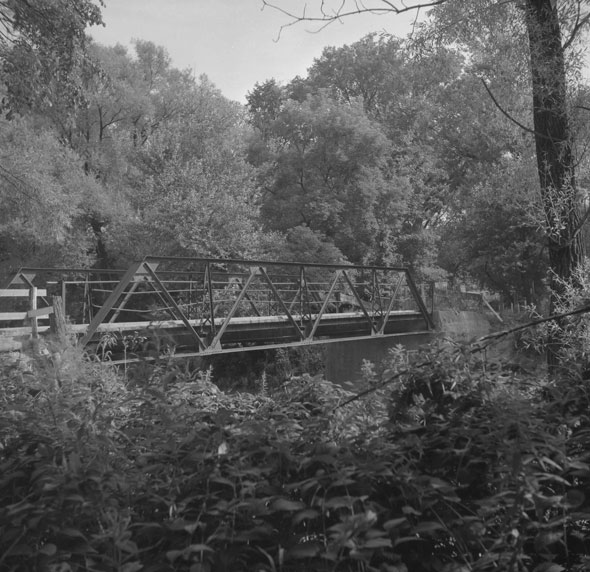 Before Lawrence Ave. became a major east-west arterial road, a small metal bridge carried the street's light traffic over the eastern branch of the Don River. Clues to old crossing are still easy to find. A short road called Old Lawrence Ave. descends into the river valley just east of the current bridge. A short walk along a paved footpath leads to a pair of orphaned concrete abutments on either side of the river.

Until construction of the Don Valley Parkway extensively reconfigured the valley landscape in the 1960s, this was the only crossing point for vehicles trying to cross the Don for some distance. The metal portion of the bridge was demolished during construction of the highway cloverleaf.

Queen St. bridge over the Don

There have been a total of three bridges over the Don River on Queen St. The first, a simple wood structure, was replaced by an ornate iron bridge in the 1800s. At the time, Queen St. crossed the Don from within in the valley, requiring a level crossing with the rail tracks at the western end. The second bridge (pictured) carried streetcar, auto, and pedestrian traffic and was distinguished by light standards at each corner.

In 1910, the second bridge was replaced by the high-level structure in use today. The steelwork was supplied by the Cleveland Bridge and Engineering Company of Darlington, England, the same company that built the Quebec Bridge over the St. Lawrence River, the Victoria Falls Railway Bridge over the Zambezi River between Zimbabwe and Zambia, and the Sydney Harbour Bridge.

Dundas St. bridge over the Humber 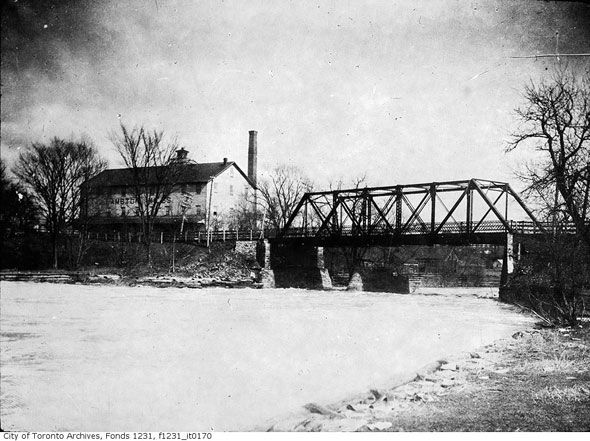 Numerous bridges carried Old Dundas St. across the Humber River at Lambton Mills. The most recent one was built in 1907 to designs by noted engineer Frank Barber on top of abutments that had been in place since 1880. The metal truss was removed in 1955 following Hurricane Hazel, though road traffic had already been diverted to the current a high-level concrete bridge to the north.

Only the supports at either side of the bridge remain. Both are visible from Old Dundas St. A flood control weir has since been constructed roughly where the structure was located. A little further upstream, another set of concrete abutments mark the old site of another lost Humber bridge, this one used by the Guelph Radial Line--a lost electric railway between Guelph and Toronto.