You'll soon be able to walk through a gorgeous new plaza with a thought-provoking art installation and a small park paying tribute to the Don River, as Waterfront Toronto has announced the winning Indigenous artists selected to design works at two sites in the city's West Don Lands area.

The announcement reveals new glimpses at the designs for the plaza of Anishnawbe Health Toronto's Indigenous Hub on Cherry Street and a new pocket park a the intersection of King, Queen and River Streets.

Artist Ludovic Boney will design the art installation in the new plaza for the Cherry Street complex, dubbed "In Equilibrium."

A preliminary rendering of the work (above) shows off a tall frame supporting thousands of fire-coloured hanging stems under a mirrored surface, framing a view of the sky above.

Boney says, "The artwork evokes a natural landscape reflected in the sky, an inverted perception of it where the viewer, eyes turned towards the sky, faces their own world. Through cattails and reeds, there is a vision, an invitation to hope and healing."

Joe Hester, Executive Director of Anishnawbe Health Toronto, celebrates the news, stating that "Through design, architecture and art, the Indigenous Hub celebrates and reflects our culture."

"Mr. Boney, an artist from the Wendat nation, shares his talent to create a special place, while connecting us to his ancestral community. In doing so, his sharing connects us to a future of hope and healing."

A short walk away at the King/Queen/River intersection, artist team Amy Malbeuf and Jordan Bennett will work with designer Benjamin Matthews and IOTA Studios to bring an homage to the Don River to this triangular plot of land.

A park has existed here, or at least the base conditions of a park, since 2017. The site was formerly an access ramp linking River Street and the Bayview Extension, cleared with Bayview's realignment during the West Don Lands redevelopment.

It has spent the last few years as a fairly minimal park, offering very little in the way of placemaking for cyclists exiting the Bayview bike path via the former River Street exit, but that will soon change.

The park's landscaping will be remodelled with new art that tells the story of the historical floods that inundated the area in years past. And I guess also the very recent ones. 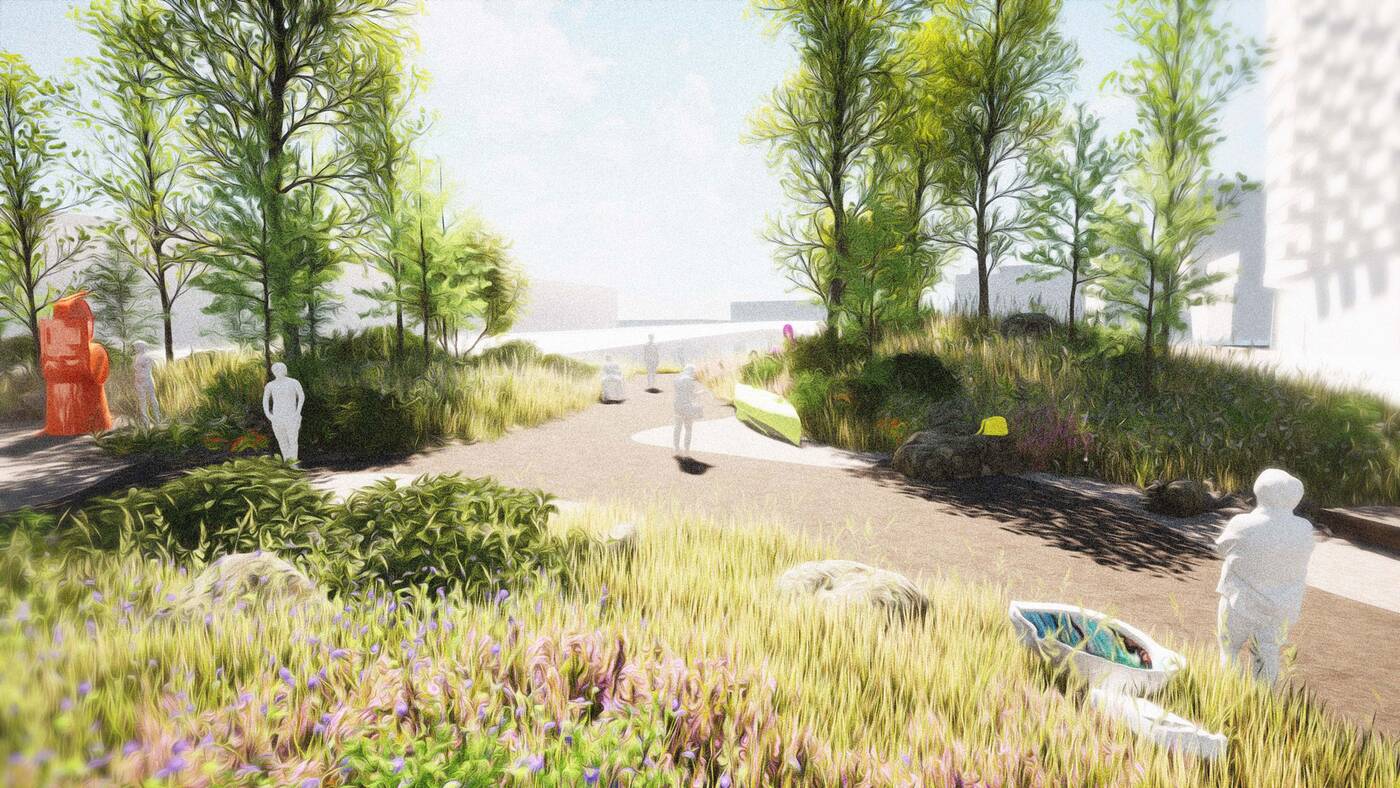 Though it won't be sheltered like the nearby Underpass Park, this will indeed be a park built on space formerly occupied by an underpass dedicated to vehicle traffic and reclaimed for cyclists and pedestrians.

"The unique placement of this future public artwork, on a site constructed and highly engineered to prevent flooding, evoked many thoughts for us around how best to respond and tell the stories of this place," says Malbeuf.

"Our ability to do this as Indigenous people is found in our ancestral technologies, ability to adapt, and use of humour and play to cope," says Bennett.

The winning designs were selected by an Indigenous Evaluation Committee working with Ryan Rice, the Indigenous Public Art Curator at Waterfront Toronto, from a shortlist announced in December 2021.

"The imaginative and provocative selected public artworks will bring character, spirit and identity to their respective sites," says Rice.