Toronto neighbourhood will soon get a big influx of Indigenous art

The Canary District is one of the newest neighbourhoods in Toronto.

Rebuilt from an industrial wasteland into an athletes' village in advance of the 2015 Pan American Games, the area was transformed into a mixed-use neighbourhood after the close of the games, one that continues to grow in terms of population and cultural importance.

Even years into the area's build-out, the reconstruction of local infrastructure and redevelopment of remaining parking lots are opening up new opportunities to bring new art to the neighbourhood.

Waterfront Toronto is capitalizing on the opportunity with a plan to commission a pair of installations in the burgeoning community that honour the Indigenous peoples who occupied this land generations before modern development.

But let's rewind to the first time Indigenous culture was planned to be recognized in the area.

Long before this land was developed into the community we know today, the area was cleared of industry in 1987 through a provincial expropriation order.

The lands were the site of an ill-fated plan led by then-Toronto mayor Art Eggleton to build an affordable housing community called Ataratiri, a Huron-Wendat word meaning "supported by clay." 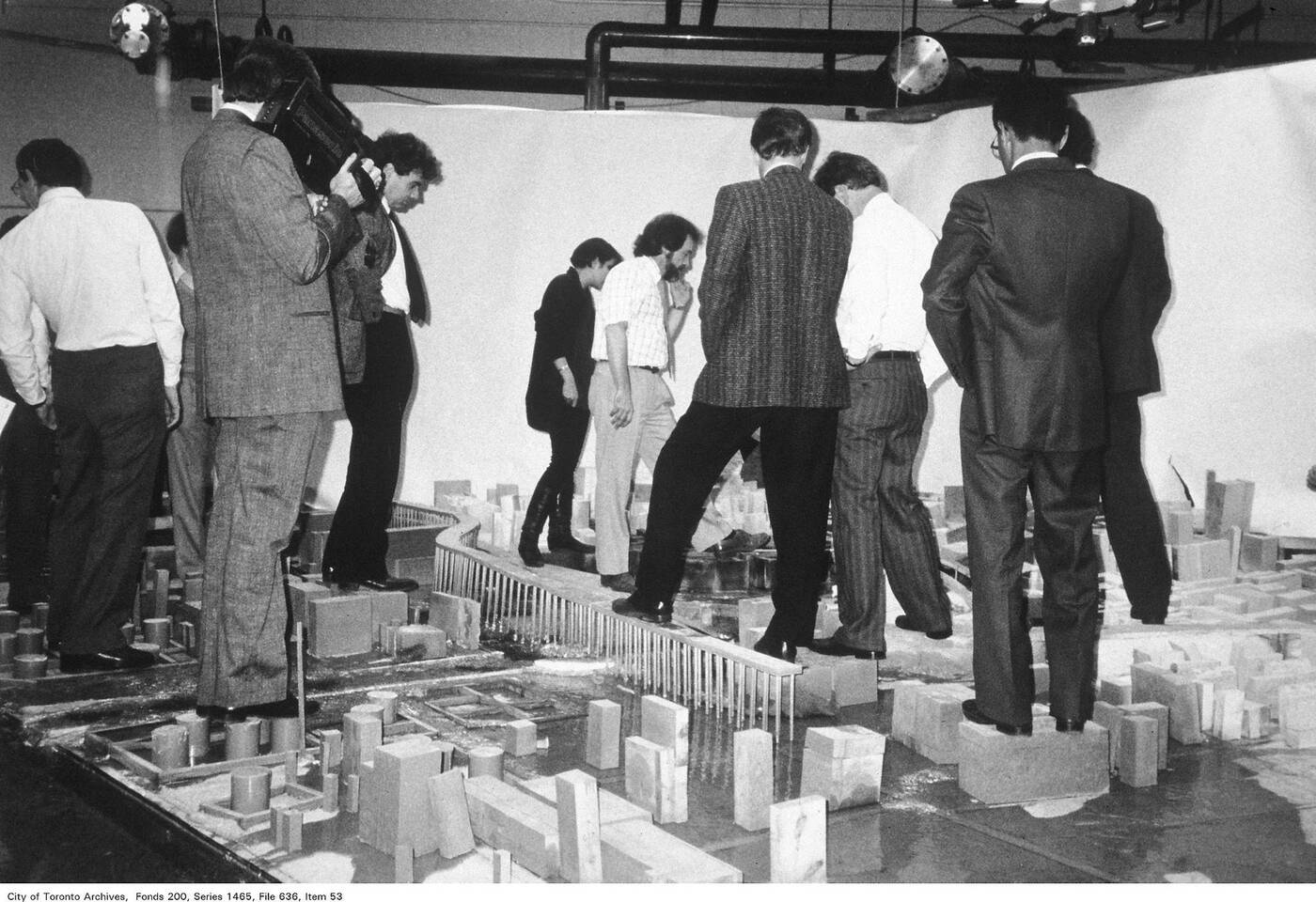 City officials and others reviewing Ataratiri model, circa 1990. Photo via City of Toronto Archives.

The Province scrapped the project in 1992 in the face of a plummeting real estate market. And while the Ataratiri name almost lived on in a naming contest for the park in the since-realized community, now known as Corktown Common, there hasn't been much recognition of the West Don Lands' Indigenous roots until quite recently.

Block 10 of the West Don Lands, at the southeast corner of Cherry and Front, will soon be home to a new Indigenous Hub, containing a community health centre for Anishnawbe Health Toronto, a training centre for Miziwe Biik, retail, condominiums by Dream and Kilmer Group, and rental apartment units by Dream, Kilmer Group, and Tricon Residential.

This site has provided Waterfront Toronto with the perfect opportunity to recognize the West Don Lands' history as an ancestral territory of the Anishnaabe, the Haudenosaunee, the Huron Wendat and the treaty territory of the Mississaugas of the Credit.

Just out front of the new hub, a public plaza will act as "a cultural gateway" to the new complex and will house one of two new Indigenous art pieces coming to the area. 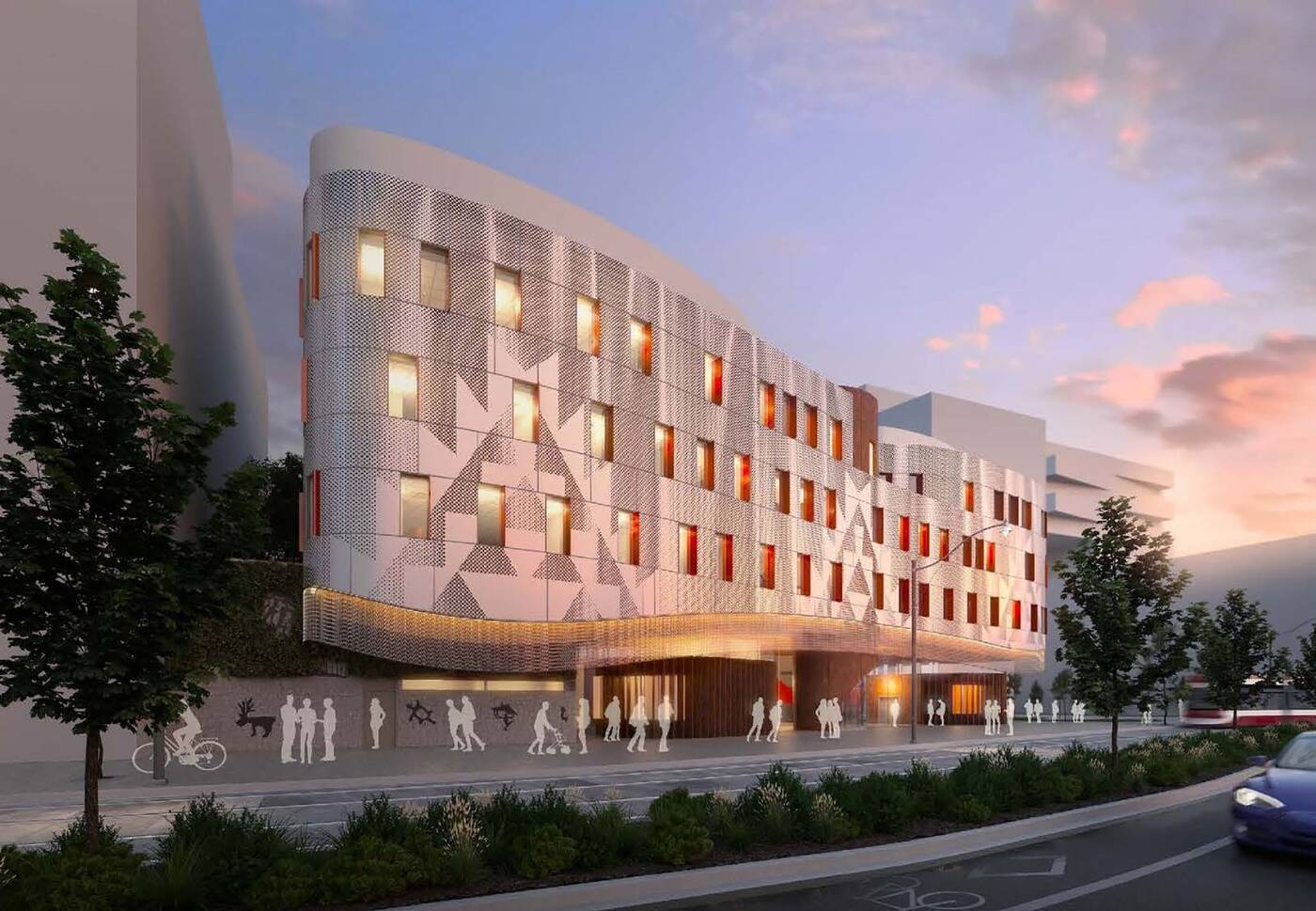 View of the Indigenous Hub from Cherry Street. The pattern of the traditional shawl that envelopes the building is visible in the rendering above. Rendering courtesy of Stantec.

The other piece of art is planned to occupy a triangle of land formed by the intersection of King, Queen and River Streets. 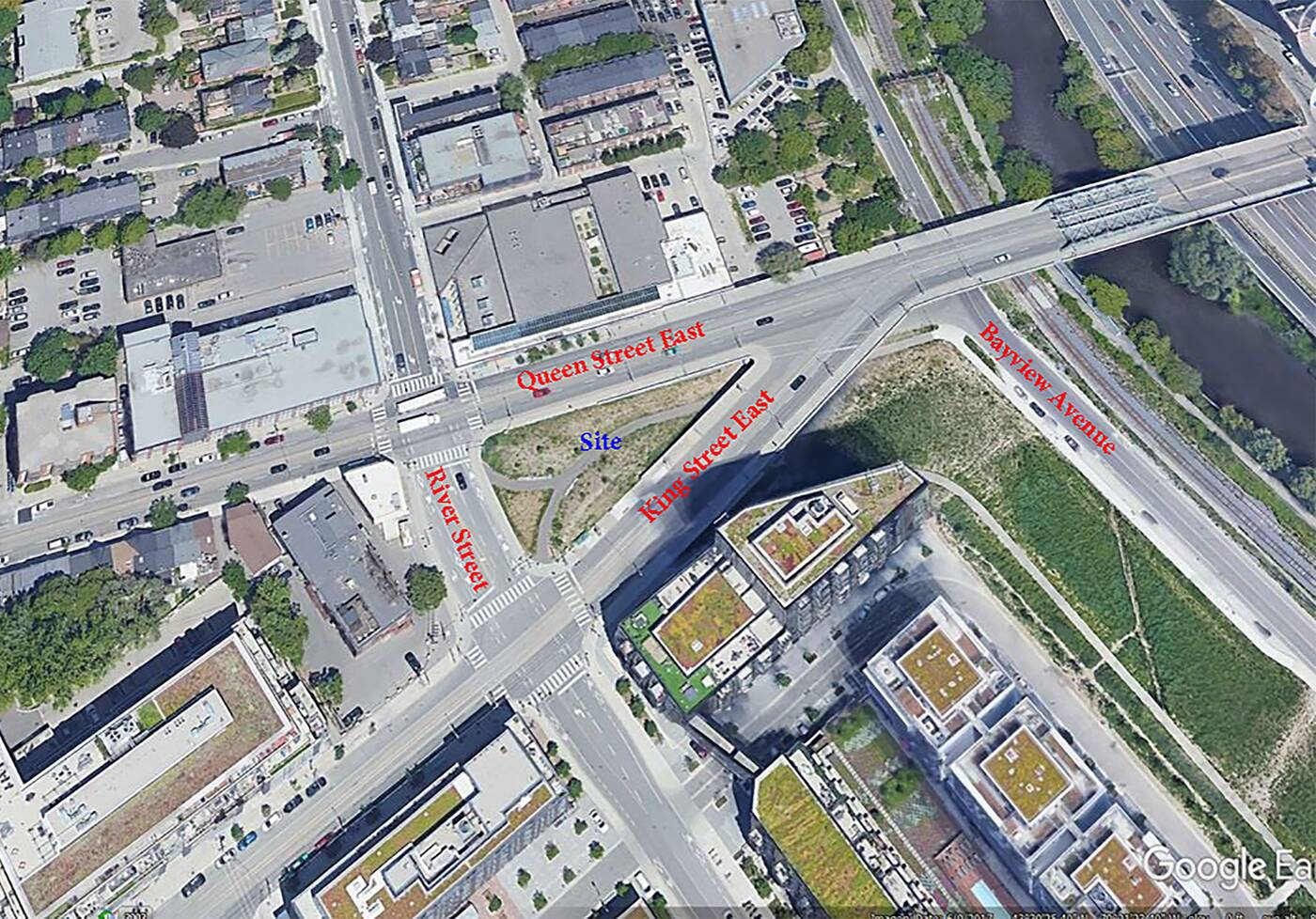 The King/Queen/River Triangle at the north edge of the West Don Lands. Image courtesy of Waterfront Toronto.

A branch of King Street once connected through this triangle to Bayview Avenue below the Queen Street Viaduct, though this route was closed and filled in to create the triangular park back in 2011.

Sited just west of the Don River, this triangular plot is to undergo improvements that will position it to serve as a gathering space at the neighbourhood's doorstep.

Part of the plan to make this wedge hemmed in by roads more inviting is through the addition of art and reimagining existing landscaping.

Waterfront Toronto selected Ryan Rice as their Indigenous Public Art curator at the start of 2021, the results of an open call to First Nations, Métis, or Inuit curators with roots in the Greater Toronto Area.

Rice has been researching the history of the sites and public engagement (survey results in PDF) to inform the design of the new installations.

This research and consultation phase was followed by the issuing of a Request for Qualifications, its submission deadline of October 7 now approaching.