A flock of exceptionally cute new Toronto residents are learning the ropes of this city and life itself from high above the ground, as evidenced by some striking photos taken near Don Mills Road and Sheppard Avenue East.

Photographer Martin Elliott, whose work you may already be familiar with (otter with a lobster! otter with a lobster!), was in north Toronto on Monday when he spotted three peregrine falcon chicks at the top of a high-rise building, "waiting for mum to bring home food."

The baby falcons appear to be older than newborns, but not by much, with bits of white down still peeking through their fuzzy-looking feather coats.

Elliott was taken aback, as he says this type of sighting is "quite rare around Toronto" — though not completely unheard of. 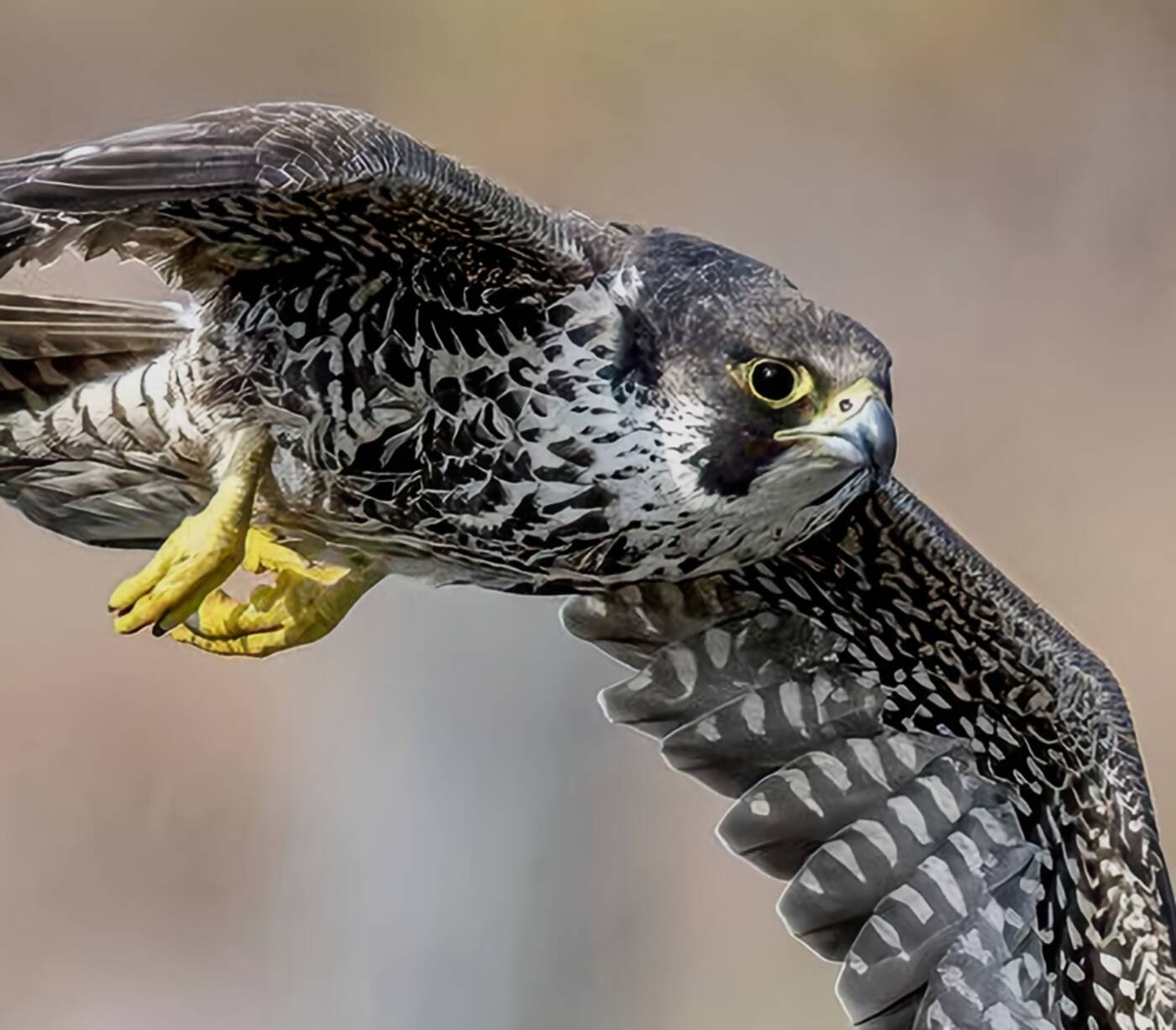 Peregrine falcons are exceptional predators and widely believed to be the fastest animals on the planet. Photo via Martin Elliott.

What makes the sighting particularly cool is the peregrine falcon's status as the fastest animal on earth (they can dive at speeds of over 242 mph or 389 km/h  — more than twice as fast as the world's quickest land animal, the cheetah, which can run up to 70 mph.)

These baby falcons are so special, in fact, that the Canadian Peregrine Foundation is already well-aware of their existence. And apparently, there are four of them.

A webcam was set up near the Don Mills and York Mills Road area in 2011, according to the foundation's website, to keep an eye on what seems to be a popular nesting spot.

The location has been occupied in recent years by a couple of falcons who go by the names Quest and Mystery.

An update posted to the website on Monday, June 6, proclaims that Quest and Mystery's babies — four boys — are nearly ready to fledge (try their wings at flying.)

The chicks all hatched in early May and have since been banded by the federally chartered non-profit group, all under the watchful eyes of mom, dad, and multiple cameras. 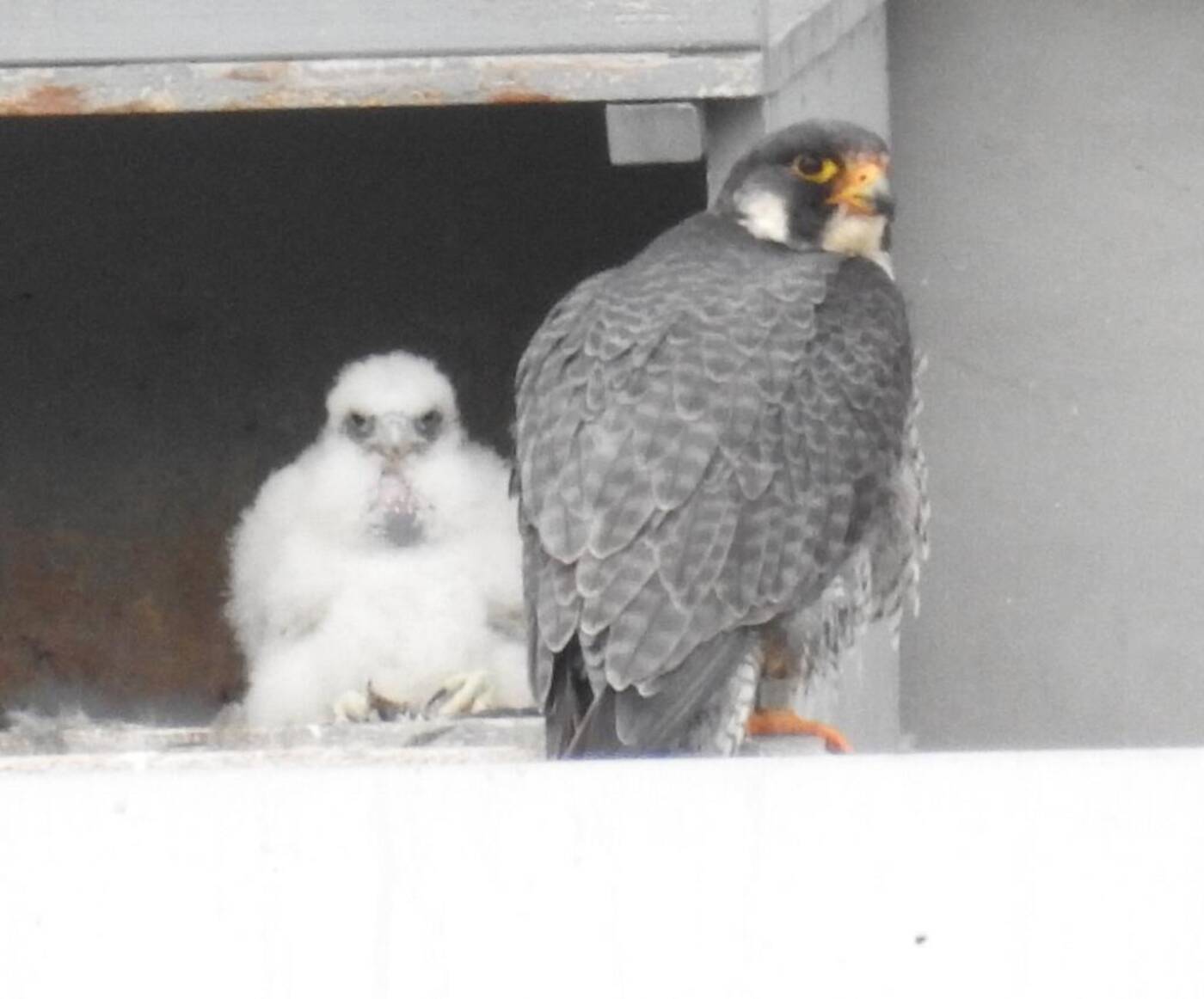 Four new falcons are about to fledge in Toronto's Don Mills neighbourhood with the help of dedicated volunteers. Image via the Canadian Peregrine Foundation.

The foundation, which is dedicated to the restoration and recovery of endangered and threatened raptors (birds of prey) in Canada, has named the four male chicks Yeager, Nitro, Ace and Zigzag.

"It's going to be a wild ride with 4 boys!" reads the latest update on this family. "Fledge watch starts June 9th!"

In Ontario, the peregrine falcon is designed as a species of "special concern," which means that it is not yet endangered or threatened but "may become threatened or endangered due to a combination of biological characteristics and identified threats."

One of the major threats facing these and other birds of prey are people.

"We should not feed the wildlife, as this may lead to issues that could impact the animals' safety," said Elliott when sharing his photos with blogTO.

"Many animals are moving into our city. They learn quickly how to adapt, how to cross busy roads, and in some cases, food is more readily available in cities. When you walk through our beautiful city of Toronto, look around you, you will be amazed by the abundance of wildlife."