After waiting for more than two years to get married at Toronto's Steam Whistle Brewery, a local couple finally got to tie the knot this past weekend — and the timing was just right, as it turns out, for one heck of a visual keepsake.

George Williams, a crane operator, and Jessi Allen, co-owner of several Ten Spot Beauty Bars around the city, were wed in front of family and friends in downtown Toronto on Saturday, June 11.

Coincidentally, this was the exact same date chosen for Toronto's 2022 World Naked Bike Ride — an annual global protest event against oil dependency and urban pollution, as well as in support of cyclist safety and body positivity.

Yup, the big naked bike ride was back in full force on Saturday, drawing hundreds of activists — some nude, some not — out onto the streets of Toronto for an organized ride that started at Coronation Park.

The riders set out around 1 p.m. on the aforementioned couple's wedding day, hitting local hot spots including Kensington Market, U of T, City Hall and the Jack Layton Memorial Ferry Docks.

Some participants travelled from the Ferry Docks through the lovely Roundhouse Park after the ride itself was over, winding up just steps from the brewery where Williams and Allen were headed.

While they held their ceremony, reception and afterparty at the brewery, typical with modern weddings, the newlyweds had actually been staying at the Delta Hotel nearby.

After getting glammed up at the hotel, they walked over to the venue a bit early for pictures at the park. It was here that their photo shoot was briefly interrupted by a group of butt-naked men and women on bicycles. 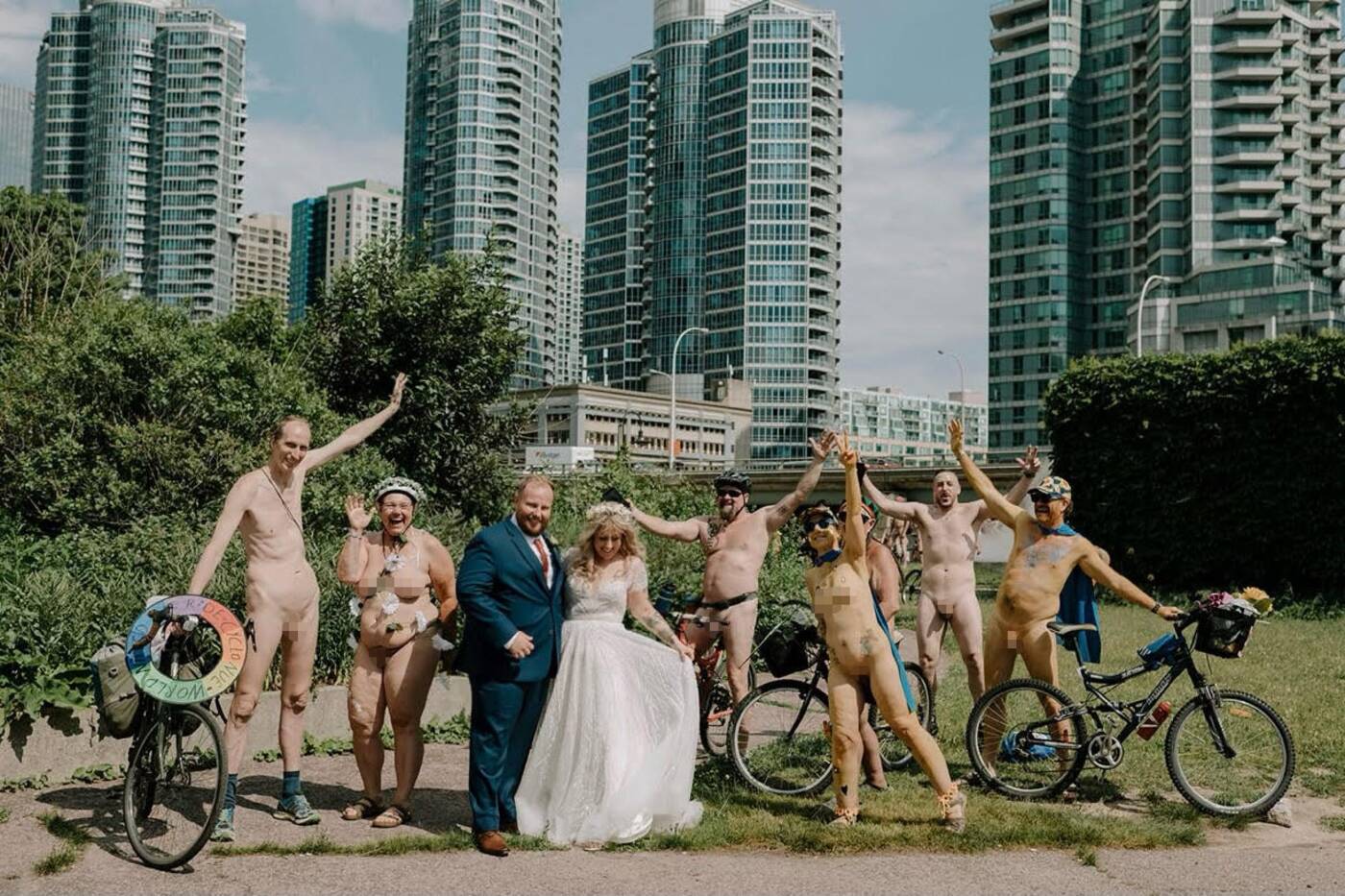 Photographer Hugh Whitaker kept snapping as the bride and groom giggled, prompting roughly half-a-dozen cyclists to stop, chat, and pose for the camera.

The groom's aunt, Elizabeth Williams, sent blogTO a delighful photo from the shoot this week, noting that "the bikers were really nice" and that the couple is "thrilled to add the picture to their wedding album."

The picture in question shows both bride and groom in full wedding attire, surrounded by the nude bikers, who wave and make celebratory gestures against the a backdrop of the Toronto skyline.

"The bride and groom have huge grins on their faces," said Williams when sharing the photo. "[They] said it was one of the highlights of their day."