A stretch of Bloor Street West will be a noisy no-go zone next week thanks to a temporary shutdown of the street and sidewalks planned to accommodate work on a rail bridge.

Starting on March 29, the stretch between St. Helens Avenue and Ruttan Street will be entirely off-limits to cars and pedestrians, the closure lasting from 6:00 p.m. to 6:00 a.m. for four nights in a row before the road reopens next Saturday, April 2.

The closure is necessary for the ongoing Davenport Diamond Guideway project, with crews to replace new girders on a rail bridge crossing Bloor Street West. The reconstruction and upgrading of the rail bridge is part of Metrolinx's push to bring future all-day train service to the Barrie GO line. 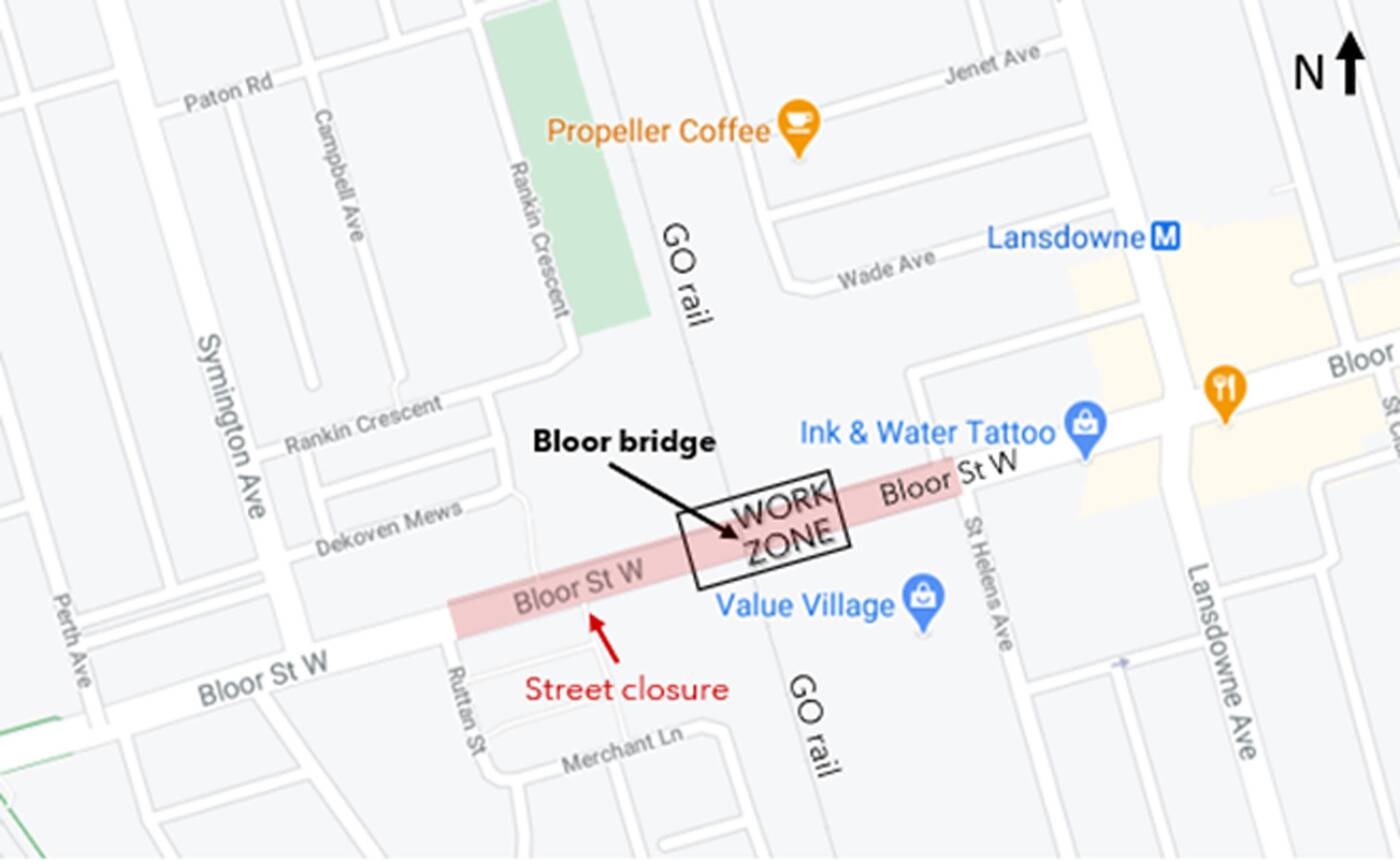 Much of the work will be happening overnight, though the closures will bleed into the morning and evening rush hours and likely cause bottlenecks in the area as motorists, cyclists, and pedestrians are barred from the stretch, with no through-traffic exceptions.

Metrolinx is advising of a detour using Lansdowne and Symington avenues going north/south, and across Wallace Avenue going east/west.

It doesn't sound too bad on paper, but due to a lack of connecting streets across the rail line, it's a hilarious circuitous route that adds about 1.3 kilometres to one's commute, while the closed route only spans approximately 250 metres. This isn't going to be so bad in a car, but for pedestrians and cyclists, it will be a huge pain.

This exact issue is one of the local problems being addressed by the very shutdown planned for next week, the Davenport Diamond Guideway project to create new park connections between two areas separated by rail tracks.

Even during the day, traffic might not be flowing so smoothly along this stretch, with alternating lane and sidewalk closures planned for March 29.

The closure will be a minor inconvenience for those passing through the area, but it might be a little tougher on area residents who will have to contend with the overnight rattling of heavy machinery, including a drill rig, crane, excavators with very loud breaker attachments, loaders, dump trucks, and concrete pumps.

The project has already faced pushback from locals over noise concerns, as Metrolinx attempts to strike a balance between traffic and noise to keep the transit upgrade moving.