The Scarborough RT's days are numbered as construction of the replacement three-stop Scarborough Subway Extension (SSE) presses through its early stages.

Crews have been working away for the past two years to prep the launch shaft for what will be the largest diameter subway tunnel in the city, while Metrolinx recently revealed the winning tunnel boring machine name, with the (in my opinion, perfect) moniker of Diggy Scardust.

There's clearly a lot going on, but until Monday, Metrolinx had offered little indication as to how these three new subway stations would be laid out. A new set of maps released by the transit agency is now offering a clearer picture of how the new stations will be positioned in relation to their surroundings. 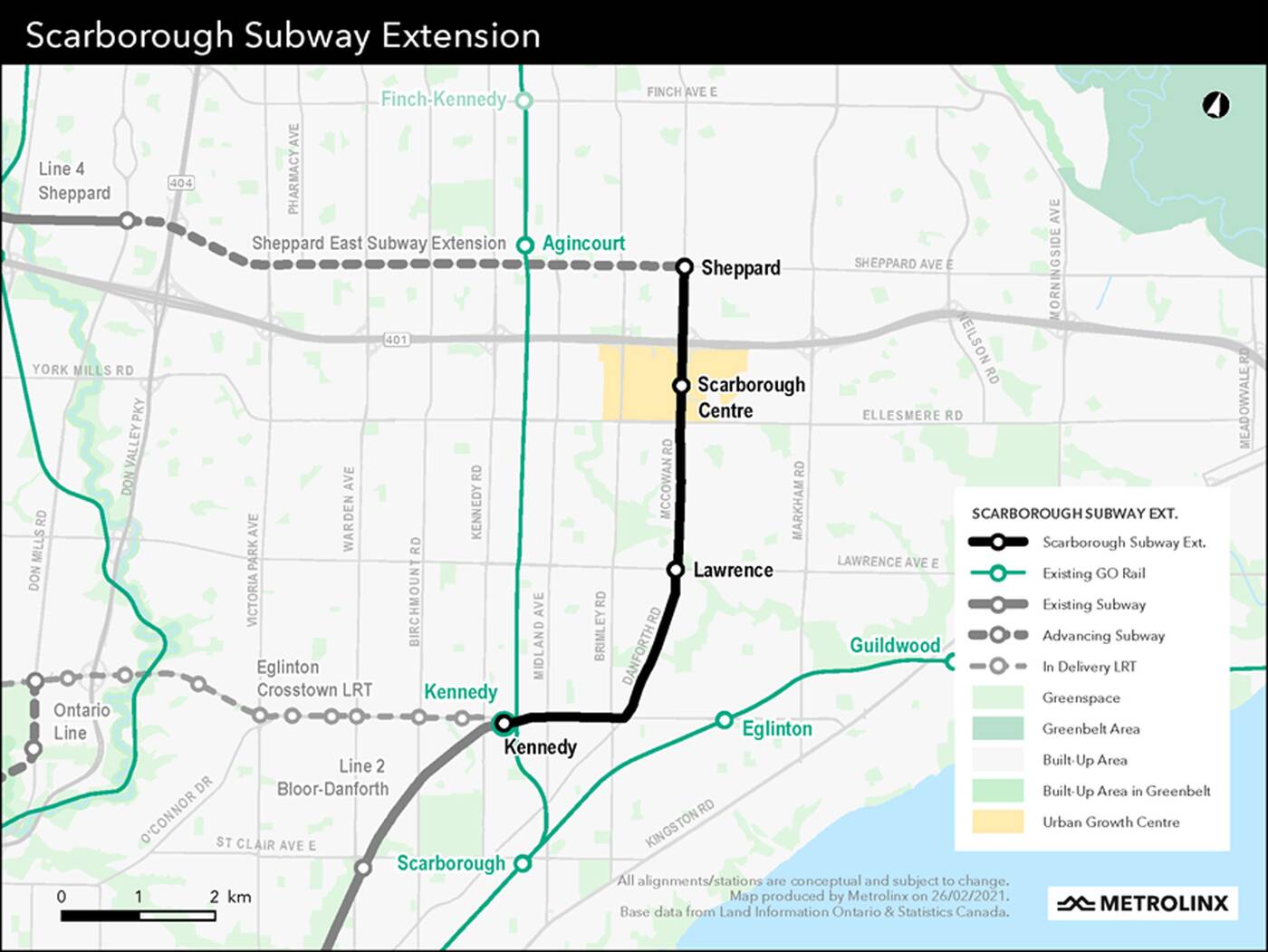 Map of the Scarborough Subway Extension's route. Image by Metrolinx.

In place of the current Line 3 Scarborough RT, the extension will carry Line 2 Bloor-Danforth trains east and north to a new terminal stop at Sheppard and McCowan, where the line is proposed to link up with a future extension of the Line 4 Sheppard subway to create a complete loop. 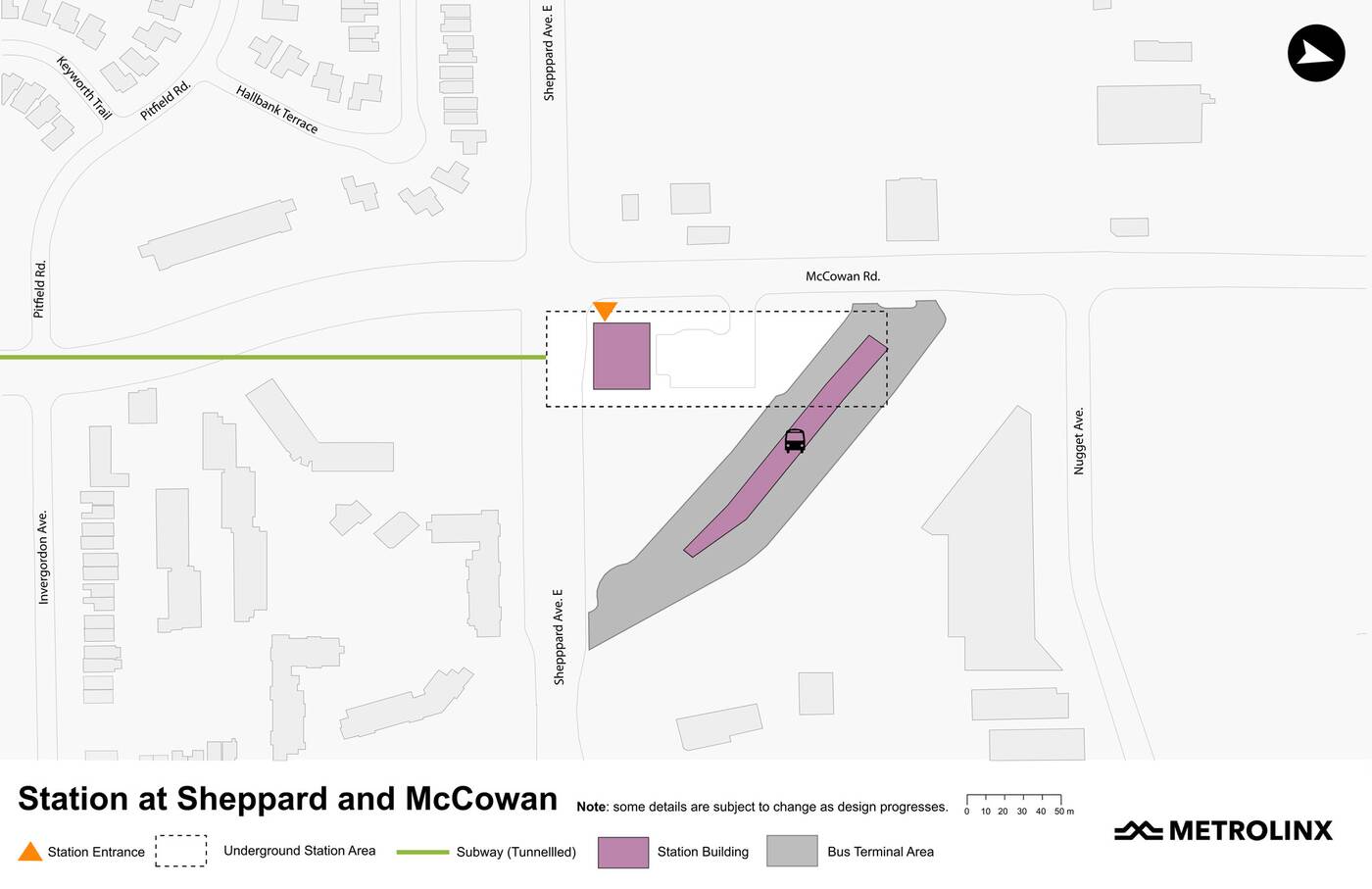 Location of the Sheppard and McCowan Station on the Scarborough Subway Extension. Image by Metrolinx.

This northernmost station is planned for the northeast corner of Sheppard and McCowan, with an attached bus terminal that will serve connecting TTC surface routes. The line's new northeast terminus is expected to serve more than 13,000 customers at the peak of rush hour by 2041.

It will massively improve travel times for locals, with area resident and community leader Ryan Singh telling Metrolinx that "this part of Scarborough feels disconnected from the rest of the city," adding that his commute to connect to the RT used to be at least 35 to 40 minutes, complicating opportunities to seek employment downtown.

For now, the station's location is home to the growing launch shaft where a massive tunnel boring machine will soon begin drilling for the line.

The intermediate stop on the extension will serve the Scarborough Centre area with a large combined subway station and bus terminal to stand on the east side of McCowan Road, just south of Progress Avenue. It will connect with several TTC and GO Transit bus routes, plus the proposed Durham-Scarborough Bus Rapid Transit line. 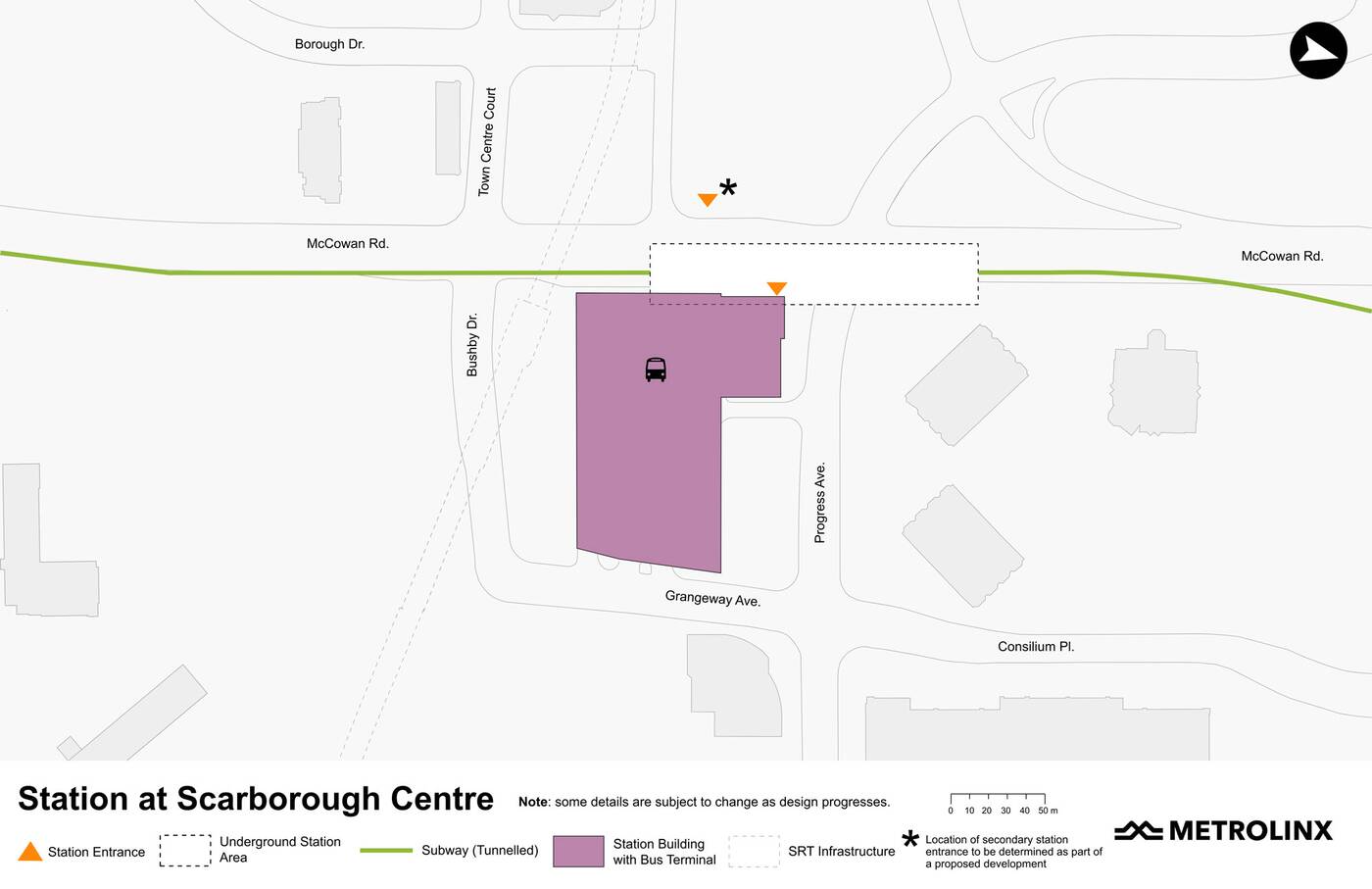 The increased speed and no need to switch trains translate to a more convenient ride, and likely even higher ridership than the average weekday figure of 23,050 recorded a few years ago.

The southernmost stop on the extension, the Lawrence and McCowan station, will be a complex of two station buildings and a bus terminal occupying both the northwest and southwest corners of the intersection for which it is named. 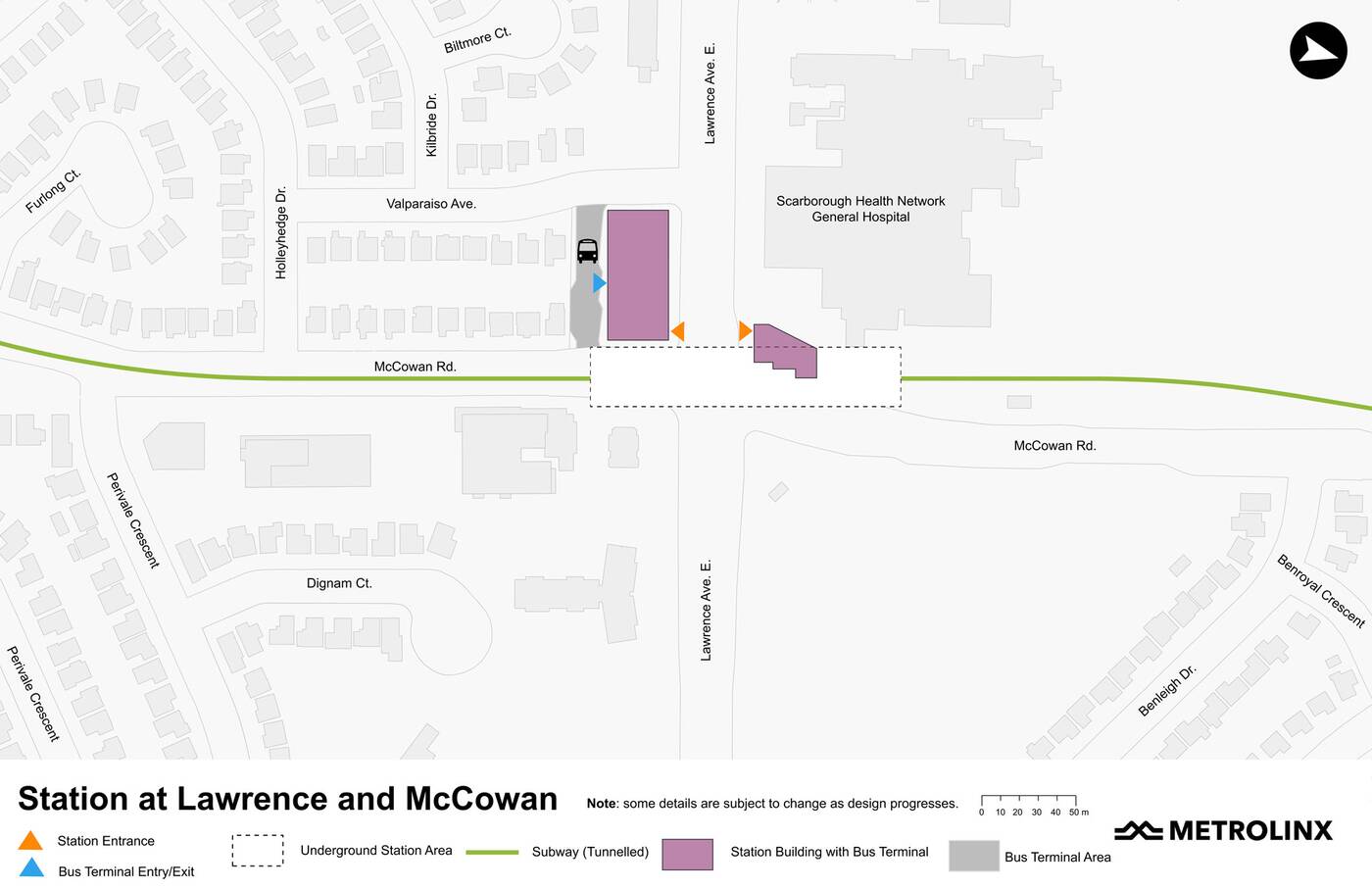 Location of the Lawrence and McCowan Station on the Scarborough Subway Extension. Image by Metrolinx.

Located roughly two kilometres east of the current Lawrence East Station, the new subway stop would be a boon for the nearby Scarborough Health Network General Hospital, but quite a hike for residents served by the existing station.

Metrolinx expects the new Lawrence and McCowan station to serve more than 5,000 customers at the peak of rush hour by 2041. Still, such ridership would be pretty impressive, as the existing Lawrence East station saw a 2018 weekday average of 7,930 passengers, and that's measured across an entire day.

Metrolinx recently shortlisted teams to prepare proposals for how they will design and build these stations, with more deets expected to drop in the coming months.