Like Toronto and its iconic streetcars, the hilly city of San Francisco is known around the world for its network of cable cars. But did you know that homesick 416ers abroad can experience a taste of home during their public transit trips around the 415?

San Francisco once had an extensive network of streetcars comparable to Toronto's, though it was one of many U.S. cities that suffered the destruction of rail and tram lines in exchange for bus routes under pressure from automakers in a scandal that would become known as the General Motors streetcar conspiracy.

Yet a legacy of this network remains in the form of two streetcar lines — the E Embarcadero and F Market & Wharves routes — that run heritage rolling stock, serving commuters and tourists alike in some of the coastal city's most attraction-packed areas.

And one of the vintage vehicles plying the F Market line might look very familiar to the older generations of Toronto residents.

As recently as 1995, the TTC operated the PCC (Presidents' Conference Committee) streetcar, recognizable for its distinct, streamlined design from the 1930s.

At one point, Toronto's fleet of 745 PCC cars was the largest on the continent, though these would eventually be replaced by the CLRV and ALRV streetcars that were only recently retired.

While it seems that one of these "Red Rocket" streetcars has found its way 3,650 km away in San Fran, the No.1074 PCC giving vacationing Canadians a little taste of home is actually a bit misleading.

Despite its distinctive TTC livery, the car never operated on Toronto streets or even in Canada. It entered service in 1946 as car #321 on the Twin City Rapid Transit in Minnesota, only carrying passengers there until 1953 when that city's streetcar network collapsed like many others of that era. 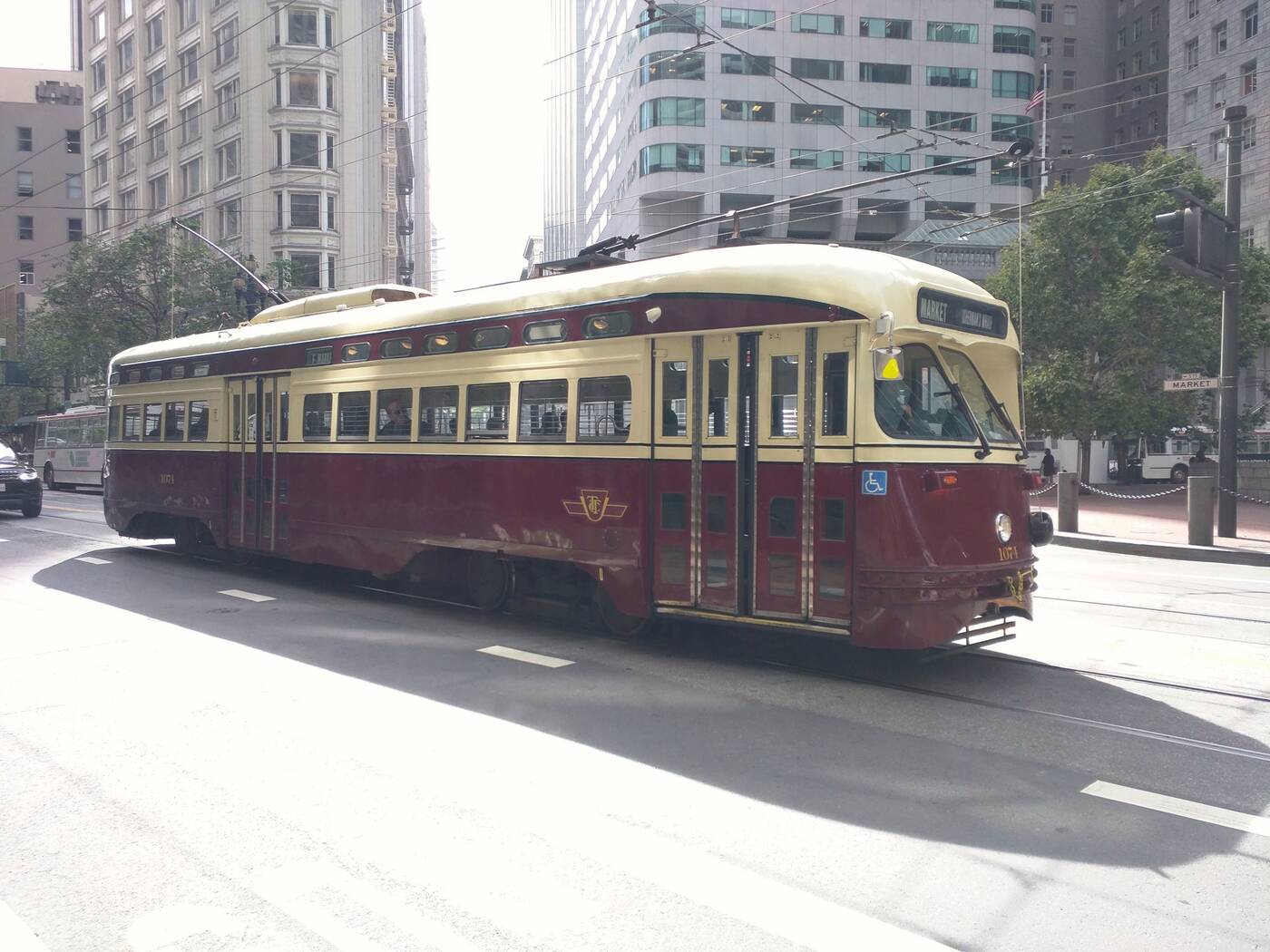 Streetcar 1074 on the streets of San Francisco. Photo by Elizabeth K. Joseph via Wikimedia Commons.

The PCC spent the next 51 years in Newark, New Jersey, as car #2 before being purchased by the San Francisco Municipal Railway in 2004 and painted in TTC livery, where it remains in service as of early 2022.

And that's not the only bit of shared transit history between Toronto and San Francisco.

The 1980s historic trolley festivals held in San Francisco inspired Toronto to restore 19 PCC streetcars to operate on the then-new Harbourfront line from 1990-1995. However, this experiment didn't last long, with the Harbourfront line switching to CLVR streetcars.

Even though most are long gone, you don't have to travel all the way to California to see a PCC streetcar in Toronto livery. The TTC continues to operate cars 4500 and 4549 for special occasions, and even more of these Red Rockets live on at the Halton County Radial Railway in Rockwood, a short drive from Toronto.