The Yonge North Subway Extension is happening for real, and while it will be several years before you can ride Line 1's eastern branch beyond Toronto's northern city limit, we're getting a clearer picture of what the experience will be like when those iconic TTC subway doors chime in Thornhill for the first time.

For those unfamiliar with the project, the Yonge North Subway Extension will extend the line's current northeast terminus from Finch approximately eight kilometres north to serve Vaughan, Markham and Richmond Hill, with a targeted in-service date of 2029-2030.

It will be the next injection of rapid transit into the region after the Ontario Line comes online to relieve the overburdened Yonge subway, and the Yonge North project took a huge step forward on Thursday with the release of an Environmental Project Report (EPR) addendum that brings the extension another inch closer to construction. 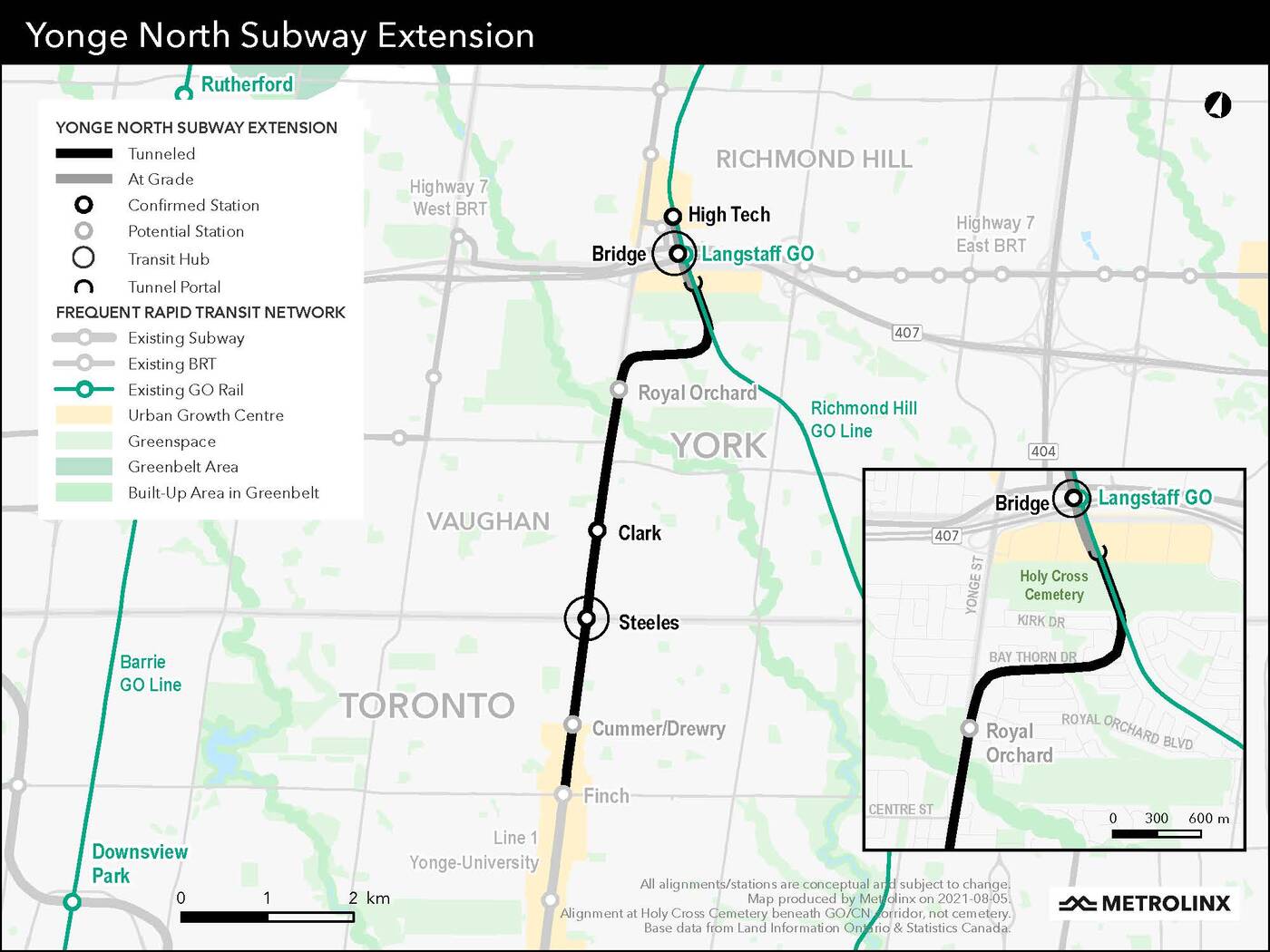 A wealth of details about the line's four confirmed stations and two stations under consideration is included in the EPR addendum, most notably, a closer look at the station platforms' footprints and how they will interact with existing and planned infrastructure.

Starting at the south end of the extension, Steeles Station will bring the Yonge line to the northern edge of Toronto. Its platform will run below Yonge from just south of Steeles to a point between Athabaska and Abitibi Avenues, directly across from Centerpoint Mall and close to a cluster of high-rise density proposed in anticipation of the new station. 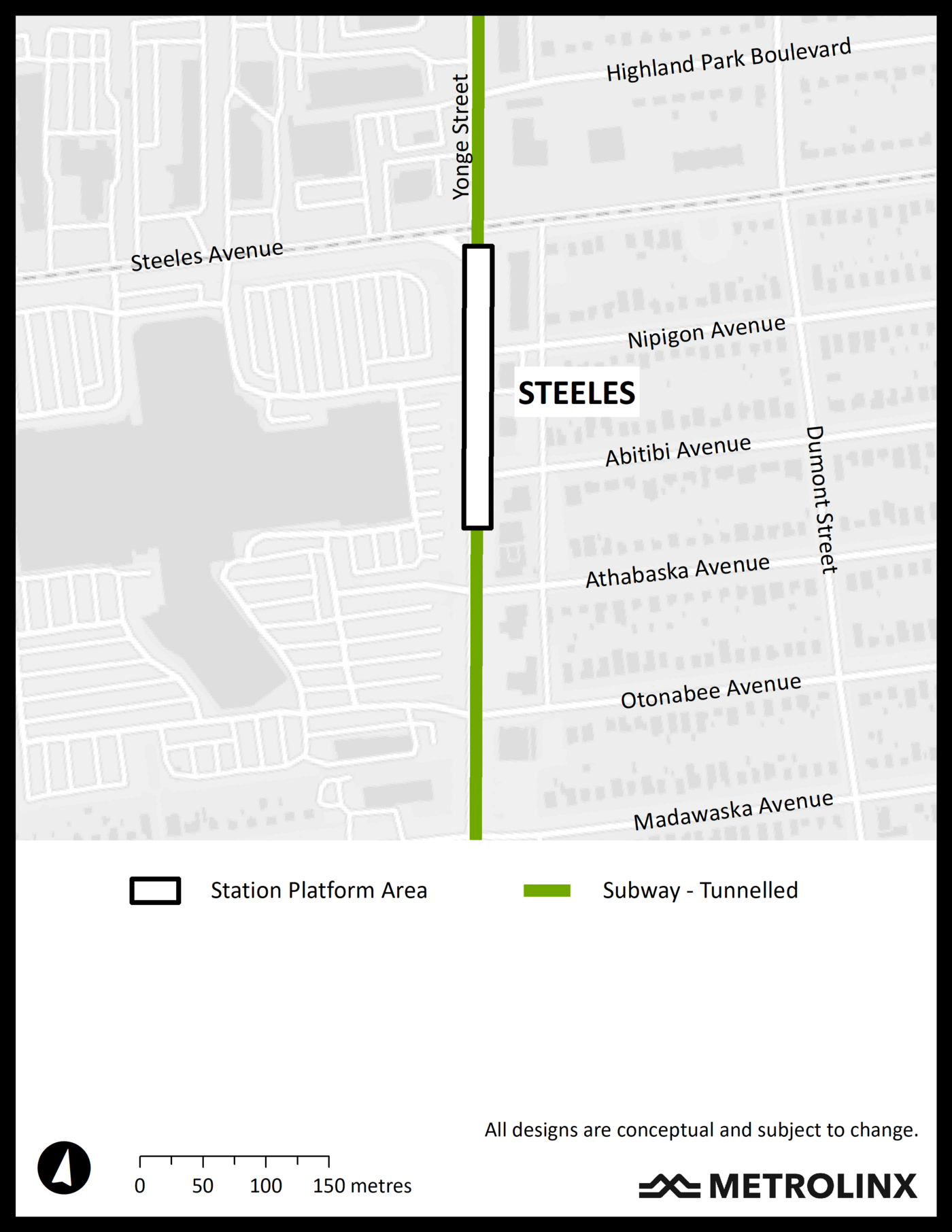 The extension's second stop and the first station in the line's run through Thornhill, Clark Station's platform will straddle its namesake Clark Avenue, extending south to between Morgan Avenue and Glen Cameron Road. A bus terminal would link to surface routes, its location narrowed down to positions at the northeast and southeast corners of Yonge and Clark. 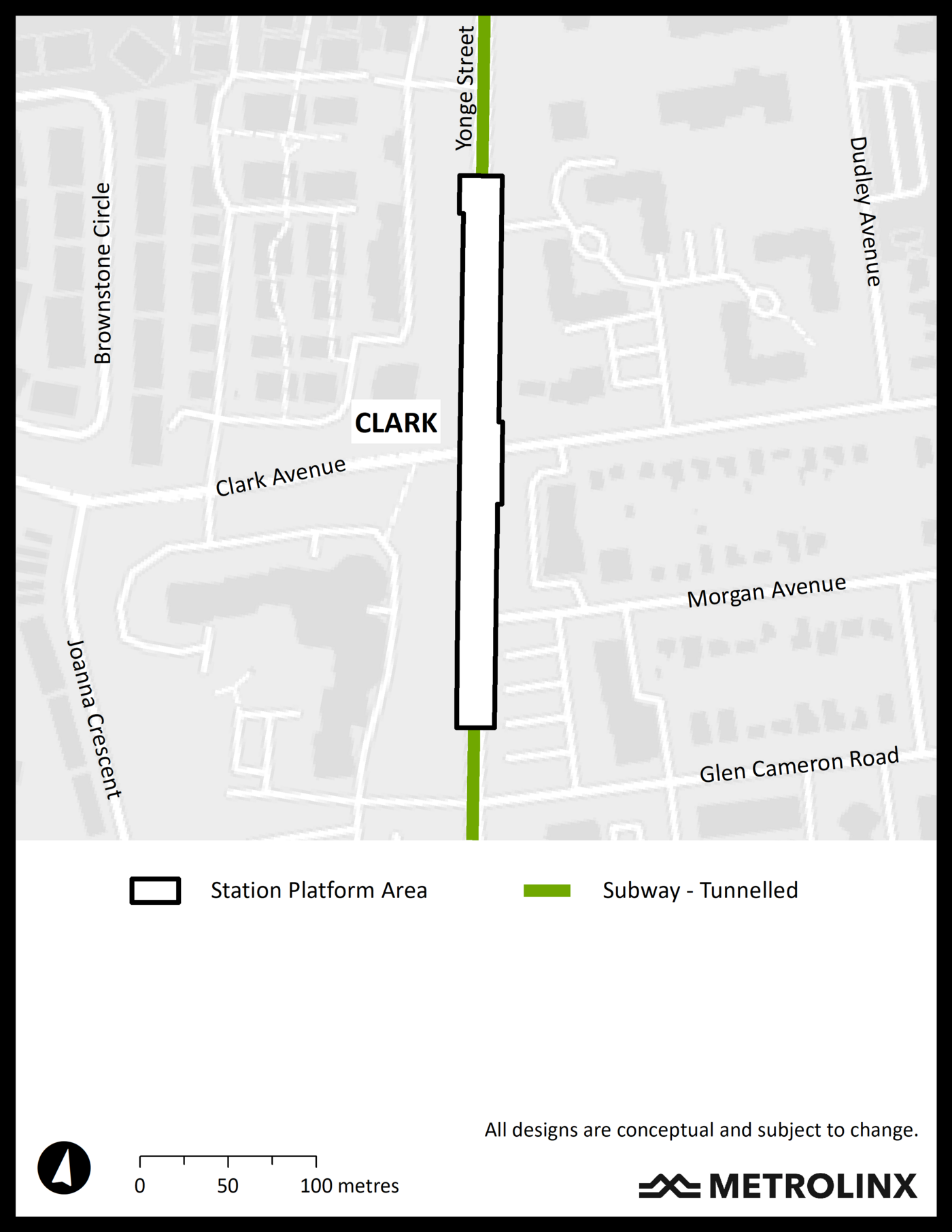 The third stop, known as Bridge Station, gets its name from the complex of bridges serving Highways 7 and 407 it will be built below. This positioning would provide access for people living and working on either side of the combined 18 lanes of highway traffic. 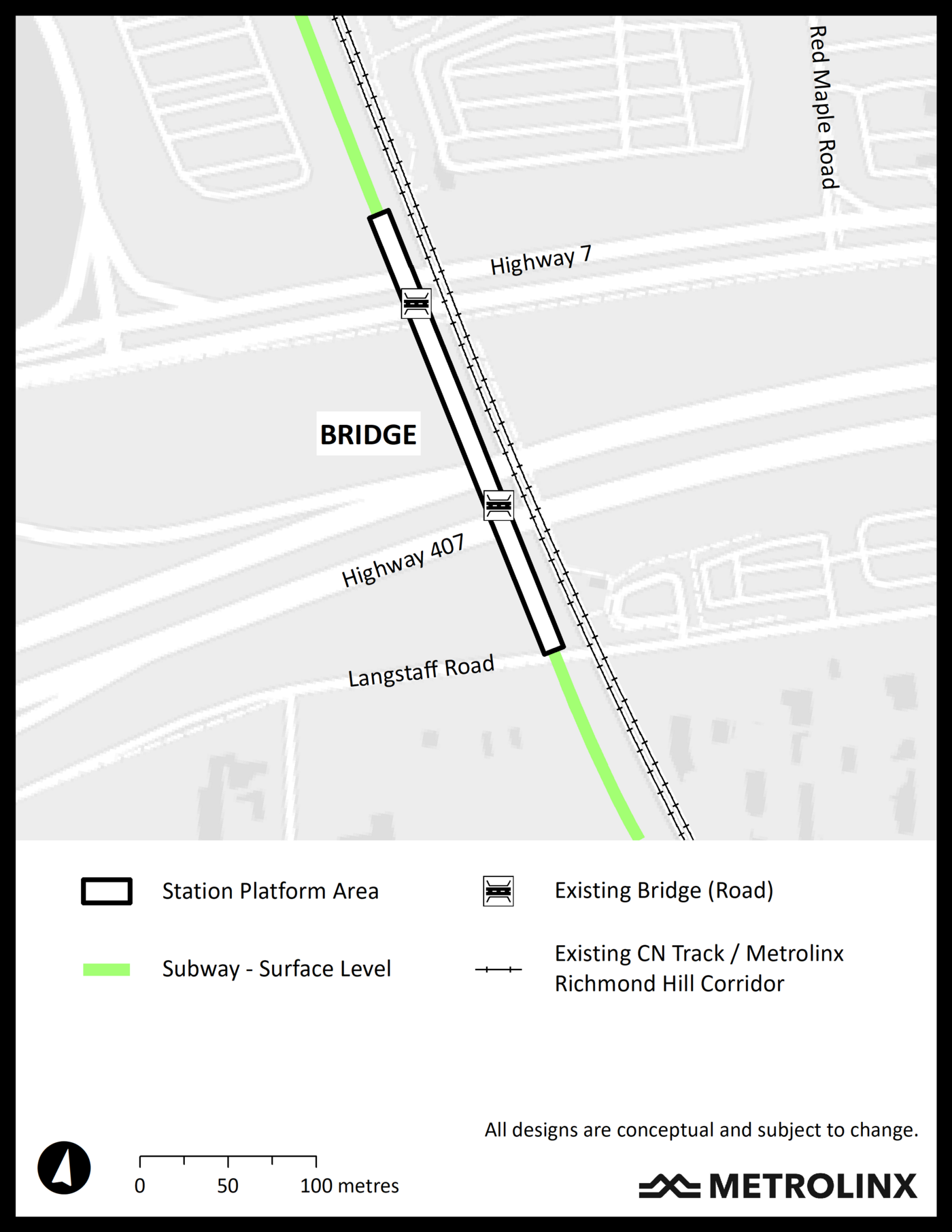 Unlike the stations to the south, which will be tunnelled, the two northernmost stations will run at grade adjacent to the existing CN/Metrolinx Richmond Hill rail corridor.

This includes the northernmost stop on the extension, High Tech Station, which would feature a platform crossing directly below a bridge carrying the road of the same name. 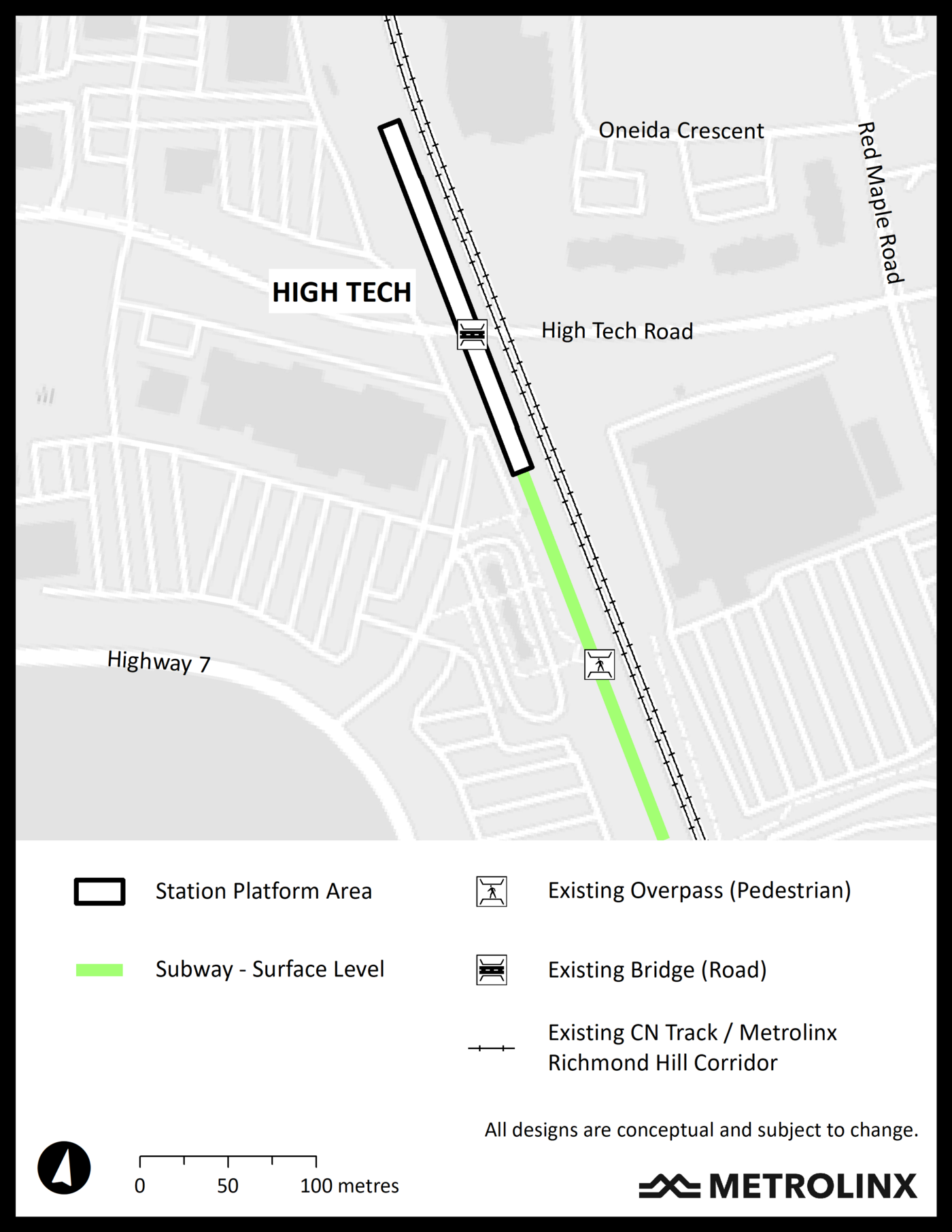 In addition to the four confirmed stations, the route also considers the potential for intermediate underground stops at Cummer and Royal Orchard.

Nothing is completely set in stone yet, and communities affected by the route are being encouraged to share feedback with Metrolinx by March 14, with the full EPR addendum and plenty of additional details available on Metrolinx's Engage website. Metrolinx will also be hosting virtual open houses to fill in the public on the extension's latest details.

The feedback gathered from the website and open houses will inform an updated report. And while Toronto transit logic dictates that said report will only inform many more reports before anything actually gets built, construction isn't actually that far off.

Construction on the line's early works, including modifications to Finch station, will begin in 2023, though you can bet that the start of work will soon become a whole new source of traffic chaos for drivers, pedestrians, and cyclists.