Toronto is losing one elevated transit line but gaining another

Toronto has a habit of breaking even: We get a new bike lane, we lose a new bike lane. We win a championship, and our team's core dissolves almost immediately.

In the latest example of the city maintaining the status quo, Toronto is gearing up to gain a new elevated transit line and lose another.

The long-delayed Eglinton Crosstown LRT is actually looking like it might open within the next year, and Metrolinx is already planning an extension of the line that will stretch almost all the way out to Mississauga.

The Eglinton Crosstown West Extension is planned to take the line another 9.2 kilometres west, adding seven stations from Mount Dennis to Renforth Drive in Etobicoke, terminating near Pearson International Airport. 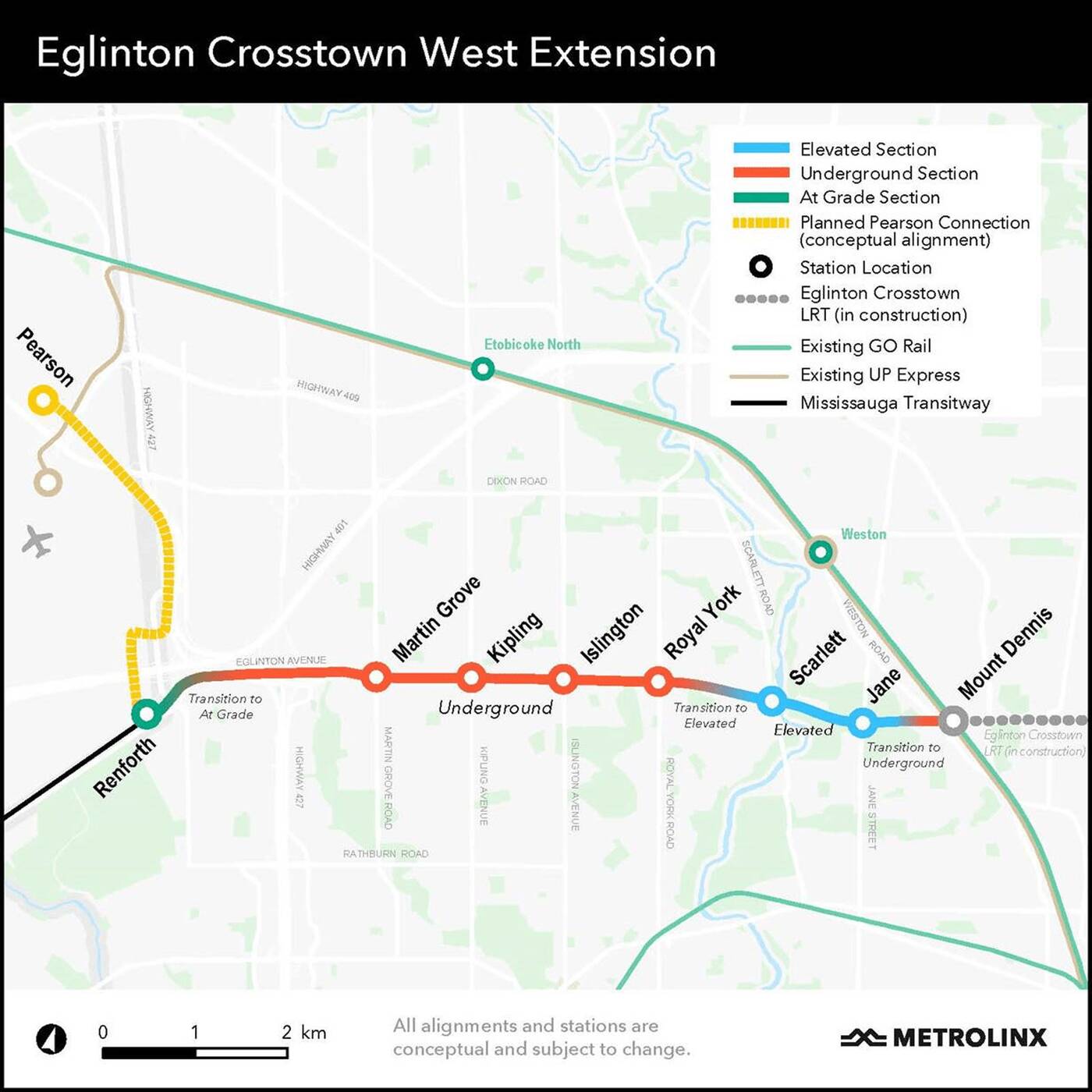 Route of the Eglinton West extension, including a future plan to build a connection to Pearson International Airport. Image courtesy of Metrolinx.

Work is already underway on the extension, with tunnel boring machines currently crossing the Atlantic Ocean headed to Toronto, a contest to name them underway, and a launch shaft being excavated for the upcoming start of tunnelling. 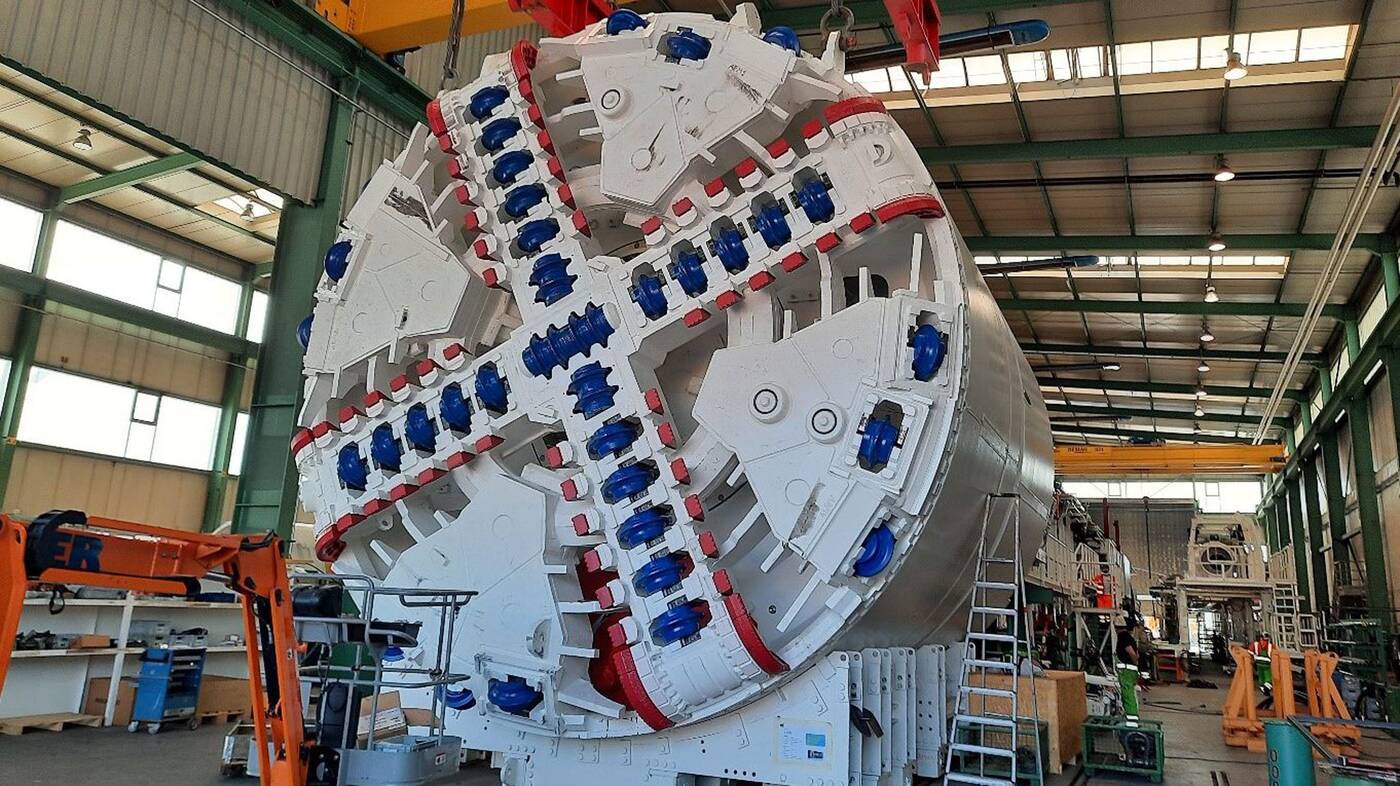 One of the two tunnel boring machines that will be used to carve out the line's underground section. Photo courtesy of Metrolinx.

The majority of the extension will run underground through tunnels carved by these two giant machines, but a 1.5-kilometre stretch of the line is set to run on elevated tracks running just north of Eglinton between Scarlett Road and Jane Street.

Metrolinx is quickly advancing plans for this elevated section, issuing prequalifications on Friday for the selection of teams to bid on a contract to design and build the stretch.

But why build parts of the line below ground and other parts above?

Joshua Engel-Yan, Metrolinx program sponsor for the project, said in a blog post that elevating this part of the line prevents the need to dig "through a flood plain zone, which will simplify construction and help prevent potential service disruptions along the corridor during times of heavy rain and flooding."

It would also require more money, tunnelling already adding a hefty markup to the initial cost estimate, which has since ballooned to about $4.7 billion.

Work on the elevated section is anticipated to begin in 2024, though by that time, Toronto will have lost another elevated transit route; the Line 3 Scarborough RT due to be replaced by bus service in 2023 and demolished in advance of the controversial Scarborough Subway Extension.

Scarborough's transit "upgrade" will replace the current Line 3 with a 7.8-kilometre extension of the Line 2 Bloor-Danforth subway. The line extension will make it easier to travel into the heart of Scarborough, but its three stops will be less beneficial for local trips than the current six-stop RT.

The Scarborough subway's complicated politics, elimination of RT stops, and a stratospheric price tag of approximately $5.5 billion have all been sources of controversy for the project, but construction has already begun.

Like the Eglinton extension, the Scarborough subway's single massive tunnel boring machine is also headed to Toronto, and will soon begin carving out the widest subway tunnel in the city.

Both the Eglinton West Extension and the Scarborough subway could be up and running as early as 2030, though with Toronto's history of missed transit deadlines, feel free to take those dates with a grain of salt.