Whether you're on the hunt for a new place to soak in some rays or take in sweeping views of the expanding Toronto skyline, the future Leslie Slip Lookout Park is a solid addition to your distant spring 2023 plans.

Revealed in early 2021 when we were all suffering from lockdown-induced cabin fever and starved for new public outdoor space, the upcoming addition to Toronto's parks system will be located in the Port Lands, at the east end of the 2.8 km-long ship channel, just north of Tommy Thompson Park.

Much like the popular Sugar Beach a few kilometres to the west, Leslie Slip Lookout Park will offer a sandy "beach" terminating in a dockwall, not actually offering direct access to the water, but still providing a somewhat beach-like experience.

Montreal-based landscape architects Claude Cormier + Associés are the lead designers for the 1.9-acre space, the same minds that brought Toronto the similar artificial Sugar Beach, plus the redesigned Berczy Park and its beloved dog fountain.

The design team has been working with the city through public consultations that have helped further shape the park's design since the first renderings were released.

A design consultation was held with Indigenous leaders, which stressed the importance of honouring traditional symbols and design concepts into the plan.

These discussions have led to changes that are apparent in the new rendering, specifically to the gear motifs and the lookout platform.

Ward 14 Toronto-Danforth Councillor Paula Fletcher says that the latest design changes are a direct response to the ongoing consultations, the design team working to "make sure it really fit well for the Indigenous community," stressing its importance as "the first waterside public space along the ship channel."

And while the area is still an active industrial shipping port, the park's design is shifting from acknowledging the Port Lands' recent uses, instead choosing to celebrate the site's Indigenous history.

"The gears have gone, as we don't want an homage to the industrial, but an homage to Indigenous culture," says Fletcher, who looks forward to "finding ways to tell that story in this little park." 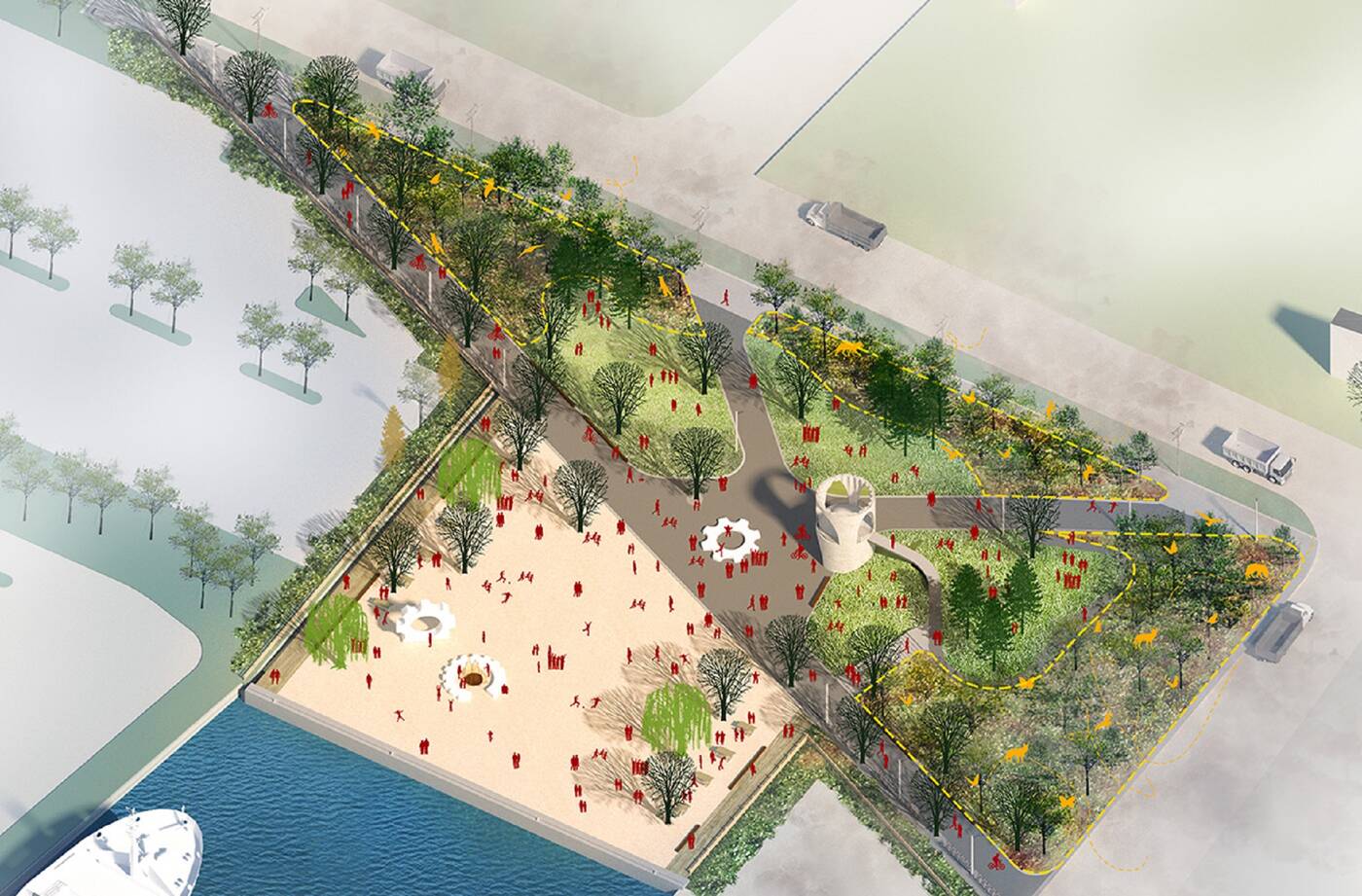 The previous design featured gear motifs that read as a nod to the surrounding industrial history, a plan which has been revised through consultation. Rendering by Claude Cormier + Associés.

"If you look at the tower you'll see that there are four openings, so that now represents the four directions," says Fletcher, a minor change to the lookout tower that holds significance in Indigenous cultures. The lookout tower also appears taller and more slender than the previous version.

A second virtual consultation meeting is planned for Monday, December 6, where the project team will reveal more details of the updated design for Leslie Slip Lookout Park. Though the design has been refined, it is by no means finalized, the public still having one more chance to weigh in on the plan.

Our second Leslie Slip Lookout Park virtual consultation meeting takes place on Monday, December 6 from 6:30 pm - 8 pm. Join us to learn more about the updated design. The meeting will include a presentation and discussion period. Register: https://t.co/2vyf0INKwE #PortLands pic.twitter.com/L0w8JXcubJ

Meanwhile, work at the new park and beach site has quietly begun, with a demolition permit issued at the end of October clearing the way for the recent start of demolition for a one-storey warehouse building standing in the path of the new public space.