While a popular pastime for some in Toronto, waiting in line is widely viewed as an annoying (albeit often necessary) task — especially when you're busy, hungry, running late or straight up irritated with the whole world.

It's not quite clear what inspired the city's latest viral fast food freakout, but the woman who stars in it was definitely furious — as in furious enough to throw hot coffee on another McDonald's patron.

A Toronto resident named Jonell happened to witness the entire kerfuffle outside a McDonalds location near Allen Road and Sheppard Avenue West on Saturday, November 13.

It was around 1 p.m. when Jonell says a woman got out of her car to yell at a restaurant employee who was bringing food to another vehicle.

"I couldn't see clearly, but I heard her yelling and swearing at either the employee or the other person, then, as she's walking back to her car, still screaming and swearing about how the service is bad," says Jonell.

"Thats when she went over to the drive-thru window to ask for her order."

And this is where the video begins, with an irate woman on foot at the McDrive-Thru window looking mad. "Karen creating chaos in Toronto" reads on overlay on the now-viral clip, posted by 6ixbuzzTV on Monday.

The next clip in the video shows a white car honking furiously at the woman, who stands in front of it defiantly while holding a brown paper bag.

A female passenger from that car gets out to confront the woman, who proceeds to thwack the passenger with her bag. The passenger retaliates and a scuffle ensues, coming to an abrupt halt after the original woman throws hot coffee right in the female passenger's face.

Things get even more chaotic from there, with the same car's driver exiting the vehicle and grabbing the angry drive-thru lady, physically pulling her over to the fast food restaurant, restraining her and eventually taking off her coat for some reason.

Jonell keeps filming all the while (along with at least one McDonald's employee), providing delightful commentary: "Not the fries," she says as she zooms in on a pile of french fries that were tragically spilled amid the chaos.

Just when it looks like the drama may have ended, another clip shows the irate woman coming back and yelling at the man who restrained her. He appears to keep holding on to the coat as the woman tries again and again to get it back. 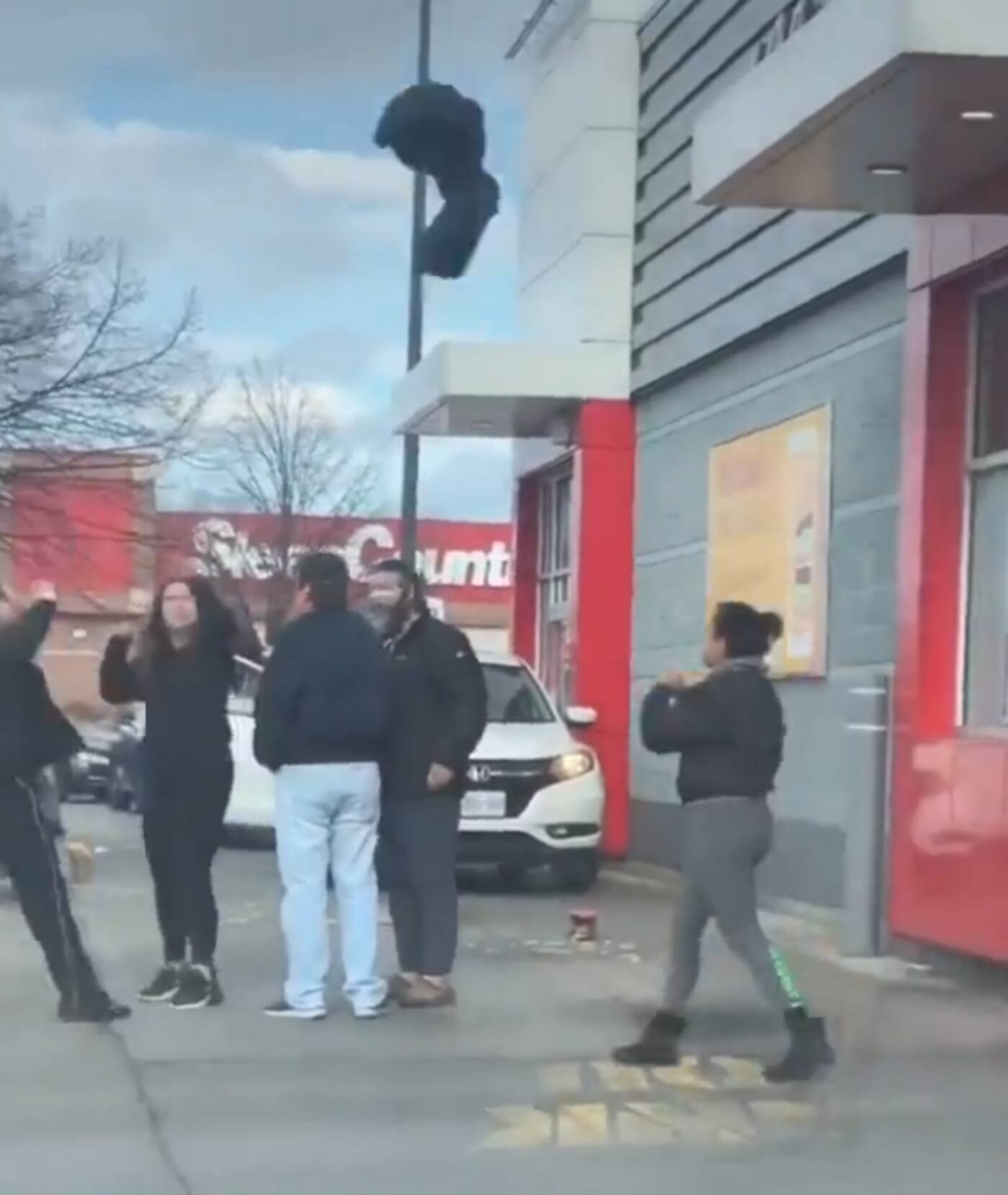 The lineup at McDonald's drive-thru in north Toronto broke out into chaos after an angry woman got out of her car to scream at staff. Image via Jonell.

At one point, the original woman gets into a vehicle that proceeds to back up out of a parking space. The guy who had been in the white car tries to put her coat under a tire, as if to stop her, but fails and the woman gets out again.

Eventually, with an audience gathered, the male driver throws the angry woman's coat up into the air.

Jonell says that the woman got her coat back at that point and that all three parties involved in the physical altercation drove off.

"I was in shock," she told blogTO of what she saw. "I also had no idea it was a coffee [that she threw] until I went home and rewatched the video. I thought it was a regular cold drink. Either way, don't throw drinks at people."

Jonell, who ironically enough writes about self-awareness and development, can be heard lamenting in the video that none of the behaviour she saw was worth it. I mean, the original woman didn't even eat her food — it was left all over the ground.

"I've seen some pretty crazy things, but nothing like this," she told blogTO, dropping some wise words for anyone who may be angry at a drive-thru in the future: "Please don't ruin your life over a situation that could be completely in your control."