Disturbing video footage is circulating today of a Toronto woman berating a Filipino Tim Hortons employee, hurling expletives and racist remarks during a tirade at the drive-thru window.

"What did you say about the Filipinas?" says the worker to a woman in a yellow sports car at the beginning of the video, which is captioned on TikTok with "Is really Filipino for cleaning only?"

The driver then launches into a racist rant, telling the Tim Hortons employee: "Go and f*ck yourself, okay? Just clean the house."

"Why are you working at a Tim Hortons?" asks the customer with a smirk on her face, periodically turning to look at her phone. "You have to clean the house."

The woman in the car describes some cleaning tasks before telling the worker that she's on the line with Tim Hortons' head office. It is unclear how or why the altercation began, but several workers can be heard at one point asking the woman to pay for her coffee.

"Did you pay?" asks one worker near the end of the video. "Did anyone give me the coffee?" responds the driver before the clip cuts out.

Another clip posted to the same TikTok account shows the woman waving and blowing kisses at the window while an employee films her.

This video of a customer at a Tim Hortons drive thru in Markham making racist comments at Filipino staff, has gone viral. “Just clean the house, change the sheets. Why are you working at Tim Hortons?” pic.twitter.com/iReAIXvHEw

The original clip was posted to TikTok on October 9 and has since sparked more than 6,000 comments, but it really took off over the weekend when it was reposted by some high-profile Instagram accounts, including 6ixbuzzTV and OMNI Television.

As they often do when these types of videos emerge, self-styled internet sleuths began searching for the woman's identity in an attempt to get her fired or worse.

It wasn't long before they found out who she was — but only because the woman in the video came forward herself to apologize, as first through an Instagram Story posted to the Sherry Privé House of Fashion account.

"To all Timhorton staff, media, partners, friends and critics. I want to apologize to the Filipino Community for the inappropriate comment," wrote Sherry Mostafavi in a statement posted to IG Sunday evening.

"I should not have said that. I can imagine you're so disappointed. Under no circumstances I should express my anger as an Individual towards the whole community. I will now be doing everything I possibly can to prevent this from happening again in future."

"Racism and bias in any shape or form, conscious or unconscious, deliberate or accidental, are simply unacceptable and need to be eradicated from society," she continues. "In this instance, we have not been sensitive enough to this agenda." 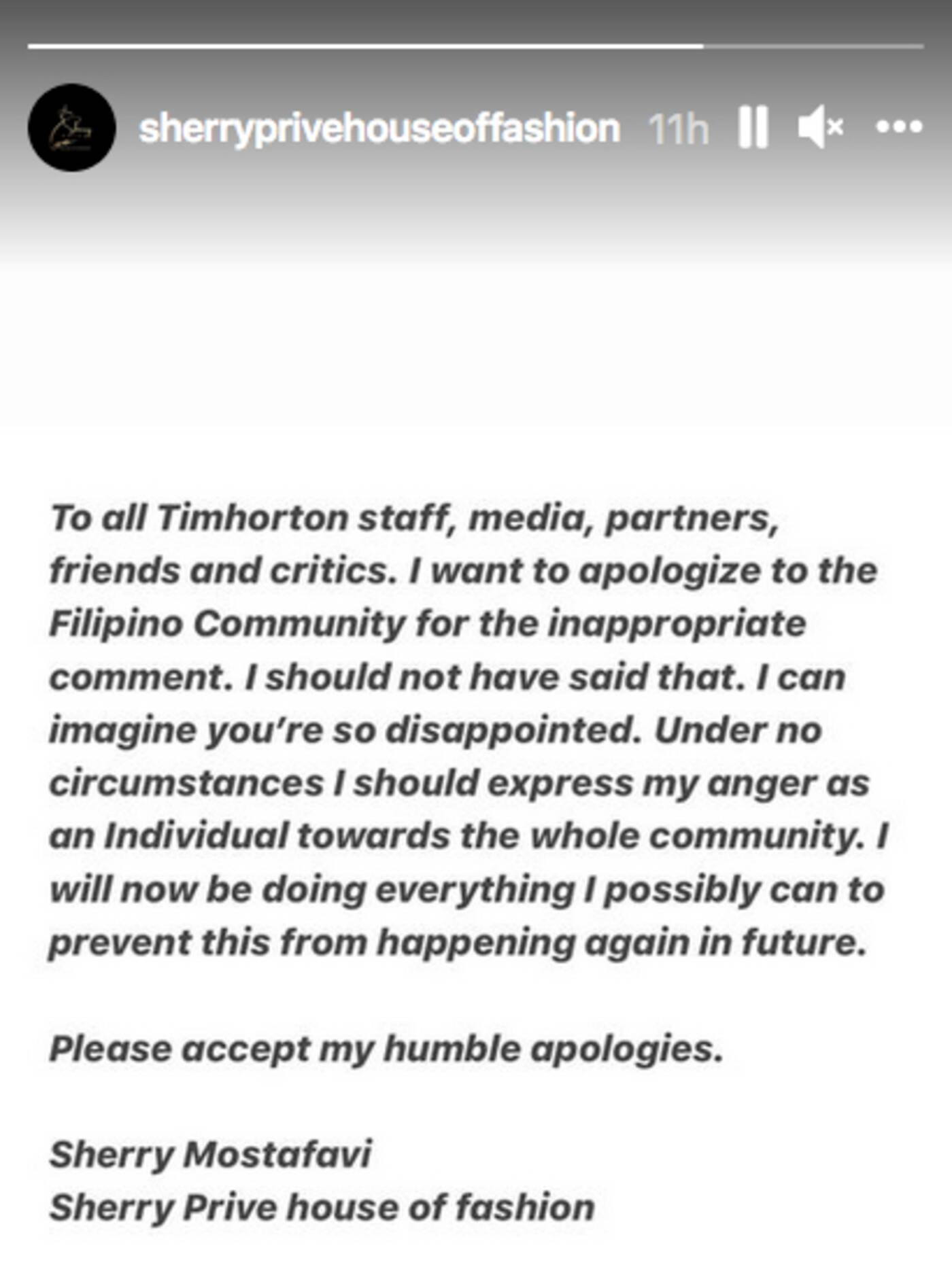 The subject of Toronto's latest viral racist rant video apologized for her actions on Sunday evening. Image via Sherry Prive House of Fashion.

Mostafavi elaborated to blogTO on Monday morning, confirming that the Tim Hortons in question was located at 7015 Yonge Street in Thornhill around 10:41 a.m. on Friday, October 8.

"Every time I get something from this drive-thru, I regret it immediately. 90 per cent of the time, they don't give you what you order," said Mostafavi, who works in the area and visits the Tim Hortons location frequently.

"I was at the drive-through and asked for coffee with two creams. She said, 'haaaaaaaaaa?' (Instead of saying excuse me, or at least to say didn't get your order coffee with??). I got upset. I went to the window and told her, what do you mean by 'haaaaaa!' I'm the customer. We both are human, and it's better not to talk to each other with this attitude."

Mostafavi said that two people in the window then started laughing at her and that she asked for the manager.

"They began to talk to each other in their language. The lady said 'I'm the manager.' I told her the employees were very unprofessional and
rude. They have no customer service skills for the most part."

After some back and forth involving the manager telling her to move her car, Mostafavi says the employees put something in front of her vehicle to close off the driveway.

"Then the argument started," she said. "I asked for the coffee that I ordered, they refused, and I began to say, you should clean the house. Do a cleaning job, change the sheets ... not work at Tim Hortons to serve coffee. You are so unprofessional."

Mostafavi went on to say that she had actually once considered hiring someone from the Philippines.

"Six months ago, I was looking to sponsoring a lady from the Philippines to live in my house. So I respect this community," she said. "If I was a racist, why should I hire someone from this community to live with me?"

The original poster of the TikTok video has yet to respond to a request for comment, but Tim Hortons sent the following statement to blogTO on Monday:

"Thank you for reaching out. We were really sorry to hear about this situation... Throughout the pandemic, Tim Hortons team members have been working incredibly hard to be there for our loyal guests and to feed and...respect they deserve. We do not tolerate any form of discriminatory or abusive behaviour at Tim Hortons restaurants. The restaurant owner is working directly with their team members to ensure they feel supported in the wake of this unfortunate and unacceptable experience."