Here's exactly how many people are homeless in Toronto right now

Toronto's affordable housing and homelessness crises are more of a hot-button issue than ever in the wake of the dramatic tent encampment evictions at major parks over the summer.

Crackdowns brought out protestors in droves, not only to the parks themselves as the events unfurled but also to police stations and Mayor John Tory's front door.

As the metropolis continues to become somehow even less affordable, new data from the city's latest Street Needs Assessment provides more insight into the city's most vulnerable as home prices skyrocket to untenable heights and affordable housing remains in drastically short supply.

According to the newly-released annual survey (which wasn't conducted in 2020 due to the pandemic), there are currently an estimated 7,347 residents experiencing homelessness in Toronto — down approximately 15 per cent from the last count.

However, this is largely attributable to low immigration to the city over the course of the health crisis by seekers and refugees, who often resort to the shelter system.

Stats and chart about the number of residents experiencing homelessness in Toronto from the city's 2021 Street Needs Assessment.

Outdoor homelessness has also increased, with the city noting that "these findings  are consistent with the increased visibility of encampments throughout the pandemic" as health concerns pushed people out of indoor shelter settings, though "there is significant movement between indoor and outdoor locations."

These citizens are spread out over the city, too, with 49 per cent located outside of central Toronto and East York in the areas of Etobicoke and York, Scarborough and North York, where way more of the homeless population tends to reside outdoors than in shelters (though City Hall Watcher creator Matt Elliott notes in his latest newsletter that these particular numbers are highly speculative). 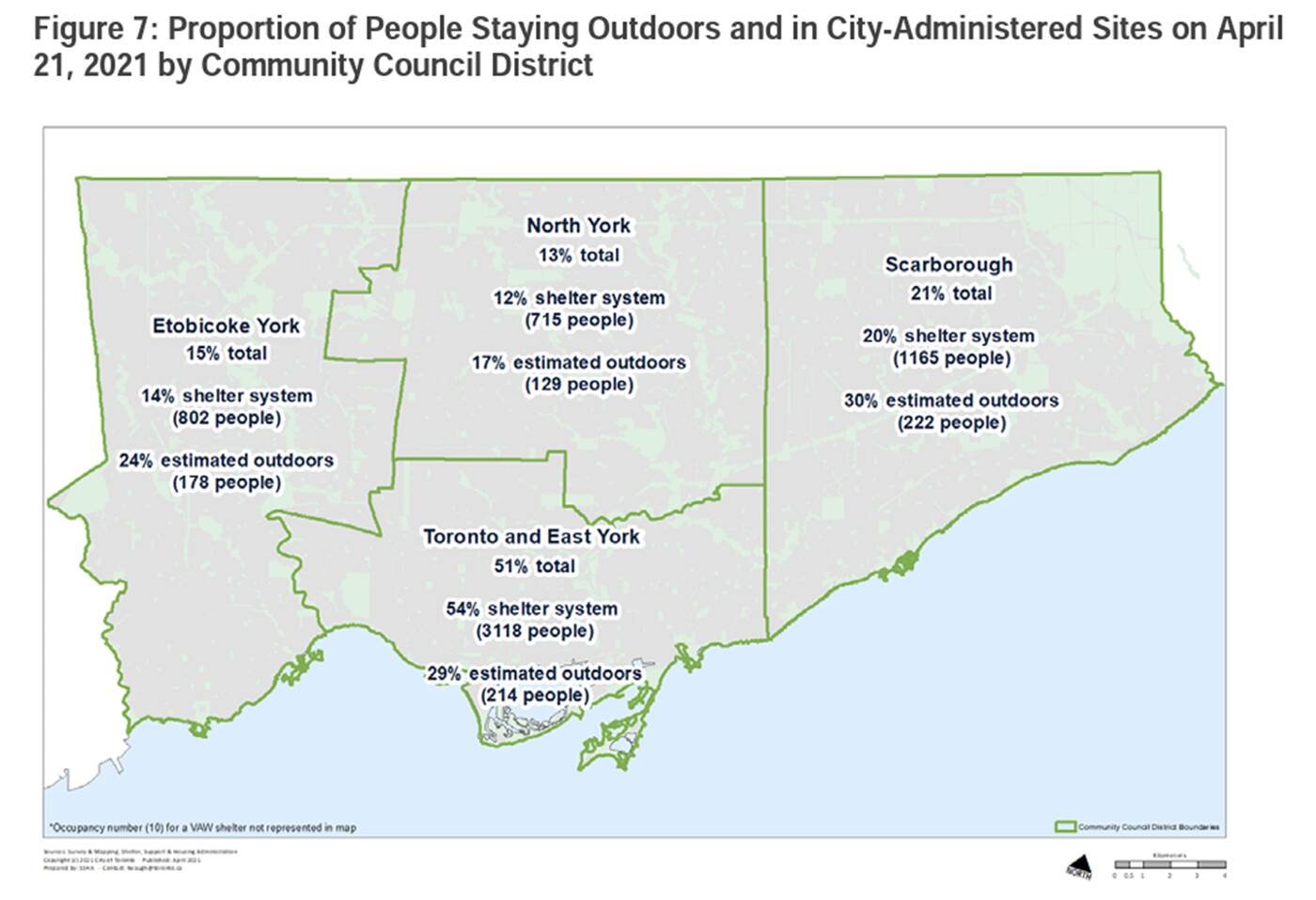 The geographical distribution of houseless residents in Toronto. Map from the city's 2021 Street Needs Assessment.

Nearly half of those experiencing homelessness have always been in Toronto (44 per cent), while most have been here for at least a year (86 per cent).

Some unsurprising figures from the report include the fact that most respondents cited not enough income for housing as their reason for experiencing homelessness, and said more affordable housing was the most crucial support needed at this time.

Other interesting takeaways from the survey: 69 per cent of the city's homeless have at least a high school diploma — about 25 per cent have a post-secondary or graduate degree — the vast majority have lived in Toronto for more than one year rather than come here from another nearby locale, over 76 per cent have some sort of health challenge and more than half report a mental health issue (and 49 per cent report a substance abuse issue).

Stats and chart about the education level of the city's homeless from Toronto's 2021 Street Needs Assessment.

There are also certain groups that prove to be more at risk for becoming homeless: 15 per cent of houseless residents identify as indigenous despite making up only 2.5 per cent of the population at large, nearly 60 per cent identify as generally racialized, while among those in youth shelters, more than one in four identify as 2SLGBTQ+.

Among these young participants, a conflict with parent or guardian was the most common reason for being left without anywhere to go.

Residents without somewhere to call home in Toronto range from 16 to 90 years old, with an average age of 43, and are predominantly (63 per cent) men.

Nearly one third (32 per cent) say their first experience of homelessness was when they were younger than 24, and another 18 per cent have been in foster care at some point.

Sadly, a whopping 77 per cent of those surveyed consider themselves chronically homeless rather than temporarily, unable to access adequate supports to change their circumstances. Nearly one quarter have lived without a home for more than five years.

Still, Toronto is faring better with the crisis than cities such as Los Angeles, Seattle, New York and San Francisco, which have way higher proportions of homeless residents per 10,000 people. 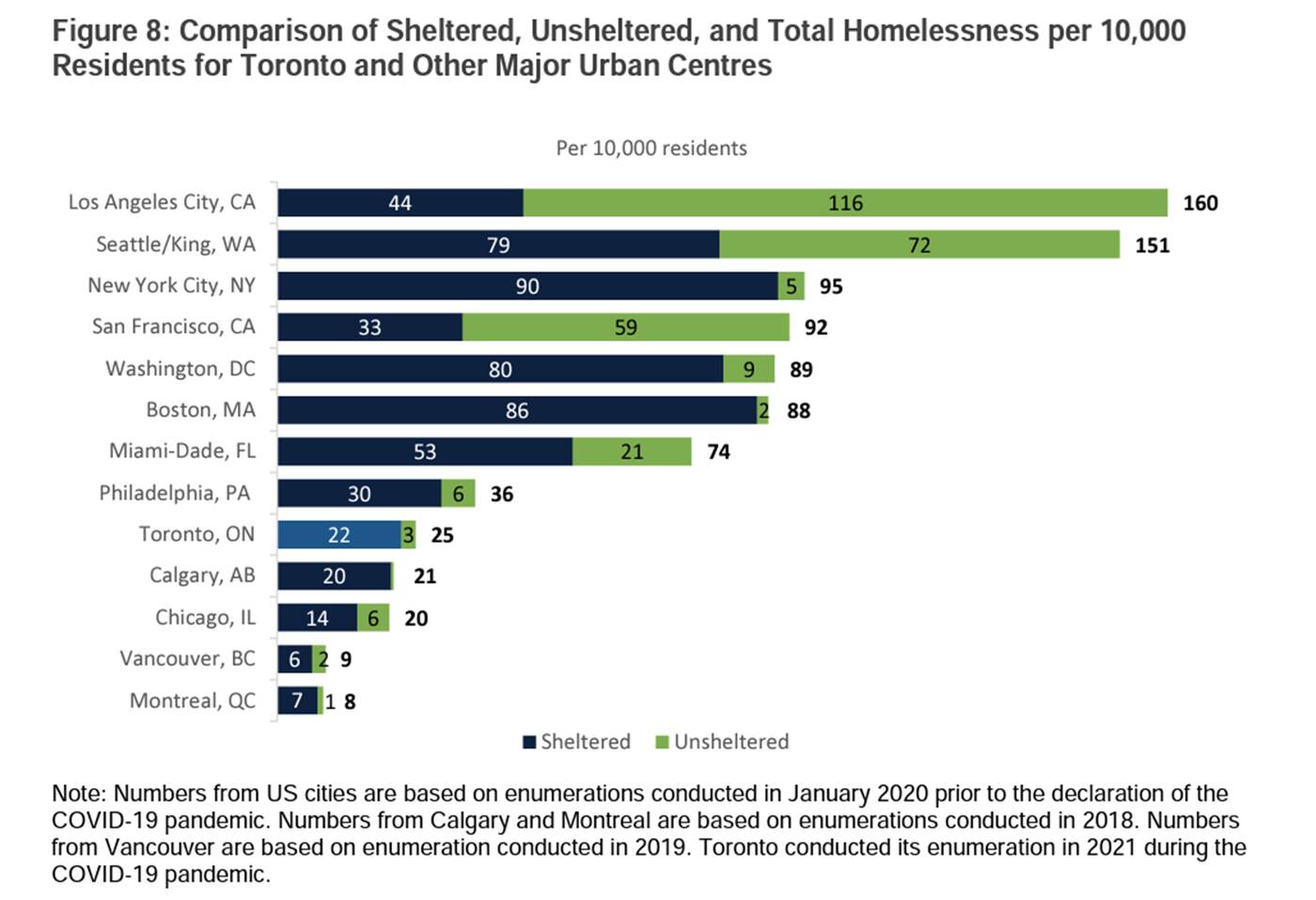 How Toronto's homelessness crisis measures up to other cities in North America. Stats and chart from the city's 2021 Street Needs Assessment.

"This information is used to improve the housing and homelessness programs provided by the City of Toronto and its partners to better serve our clients and effectively address homelessness."