Taking the fight to City Hall is one thing, but protesters took things to the next level today by bringing their battle right to the front door of Toronto's mayor, John Tory.

Today's protest outside the mayor's Bloor and Bedford condo tower was held in opposition to the raft of criminal charges issued by Toronto Police during their controversial encampment evictions this year.

Dozens were on hand for the #DropTheCharges protest on Thursday morning outside of the One Bedford condo tower, with police standing guard between protesters, traffic, and the condo's lobby entrance. 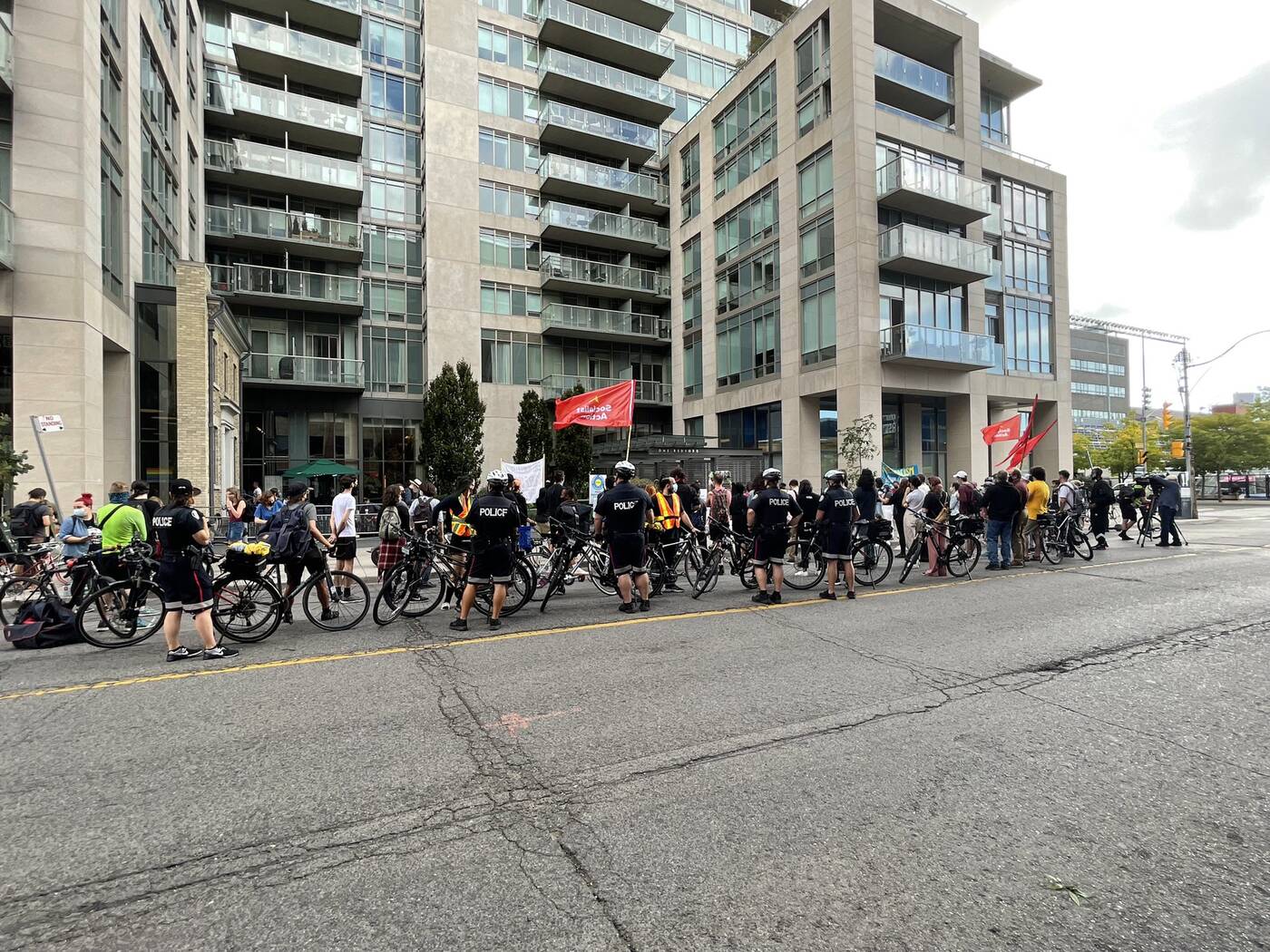 The group hopes to have charges dropped and fines lifted for the over 50 homeless people and supporters arrested or fined during the encampment clearings.

Hundreds gathered for #DropTheCharges action in front of Mayor @JohnTory's condo in downtown Toronto at Bloor and Bedford. I identified myself as a journalist and asked the officers what their orders are and if they plan on using violence. All they said was get on the sidewalk. pic.twitter.com/DyDUEPCC7u

Other calls from homeless support organizations continue to echo, including demands to the City to immediately end the encampment evictions, find quick and permanent solutions to the affordable housing crisis, and drastically increase Ontario Works and Ontario Disability Support Program benefits. 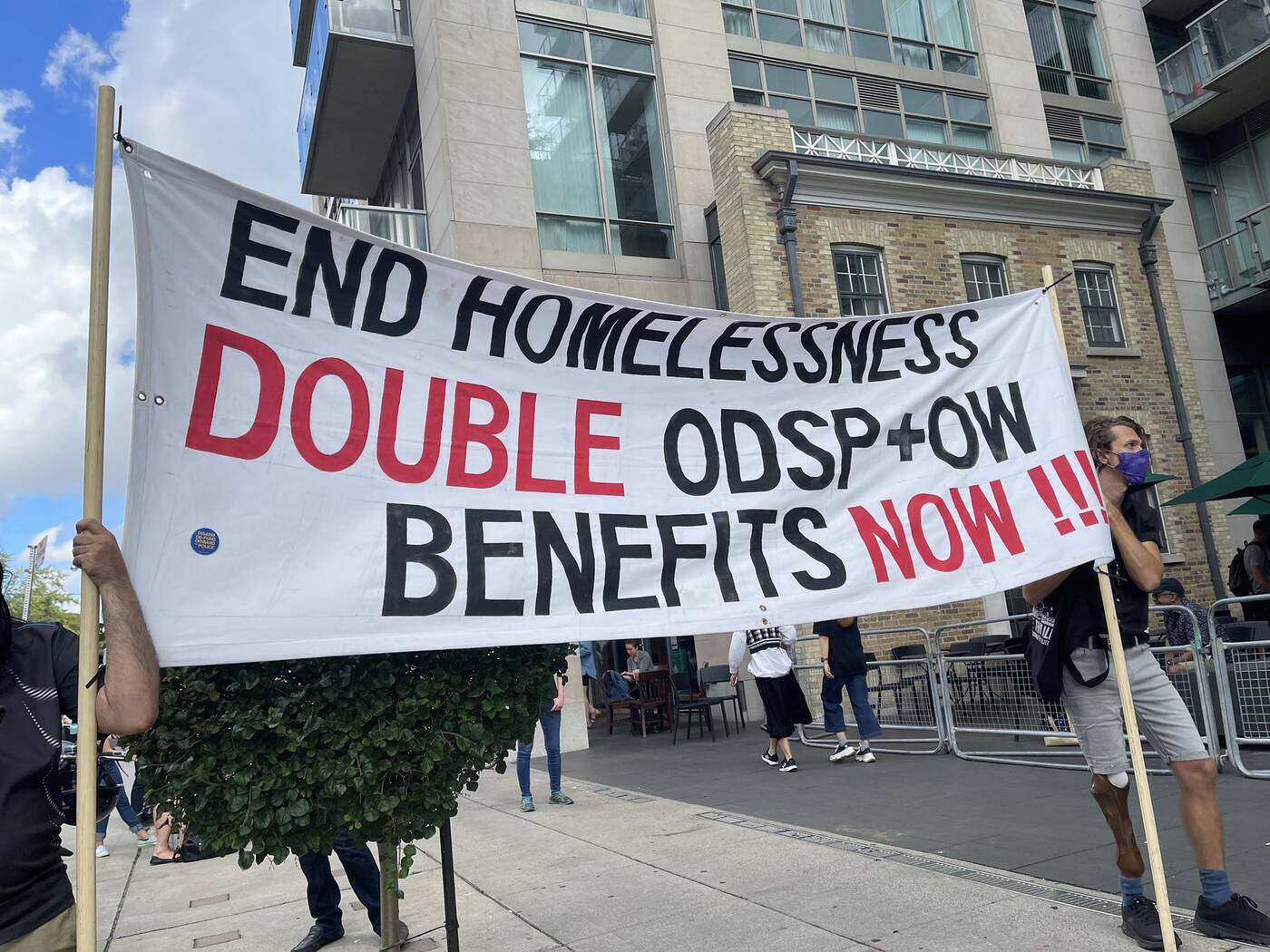 Many spoke out at the protest — with microphones within clear earshot of Tory's window — including one who claims she was assaulted during an encampment eviction, all while being on a waiting list for wheelchair-accessible housing for a decade and a half.

“I am ashamed at our City. At Lamport, 3 police assaulted me. I cannot imagine the level of hate someone must have to try to obliterate these communities. I have been on the waitlist for wheelchair accessible housing for 15 years” Jennifer @Wyld_Wych - supporter/shelter resident pic.twitter.com/AQIZOxKXSt

There are reports that Skyler Williams, spokesperson for 1492 Land Back Lane — land in Caledonia contested by the Six Nations of the Grand River — was removed from the protest by police and brought to 14 Division.

This has been confirmed in a Toronto Police statement, saying that Williams was arrested along with two others in connection with allegations of activities during a July 21 encampment eviction.

Police state that today, "officers identified and arrested three people. Skyler Lee Williams, 38, of Brantford, has been arrested and will be charged with: Fail to Comply with Recognizance. A man and a woman were also both arrested for Assault With a Weapon and Weapons Dangerous. They will be charged later today."

Today, we arrested 3 people in connection with a protest outside @TPS14Div where crowds became hostile. We are looking for 8 more, all wanted for alleged offences including assault with a weapon.

Police are looking for eight more people in connection with those events.