A majestic member of Canada's animal kingdom is alive, well and likely quite dirty today thanks to the brave actions of two retired prospectors who risked their own lives to save a distressed moose.

Maurice Valliere and Pat Greba, both 70, made like superheroes and sprang to action last Wednesday upon learning that a full-grown male moose had been spotted deep in a mud pit, unable to move, in the wilds of Timmins, Ontario.

"I was at home and I got a call from a buddy saying he's in the bush taking soil samples and he's found a moose 20 feet from the road," Valliere told blogTO.

That buddy, aged 82, had tried to help moose out himself by laying down branches and trees for the animal to climb, but Vallier says that the mud was too heavy for the moose to break loose. 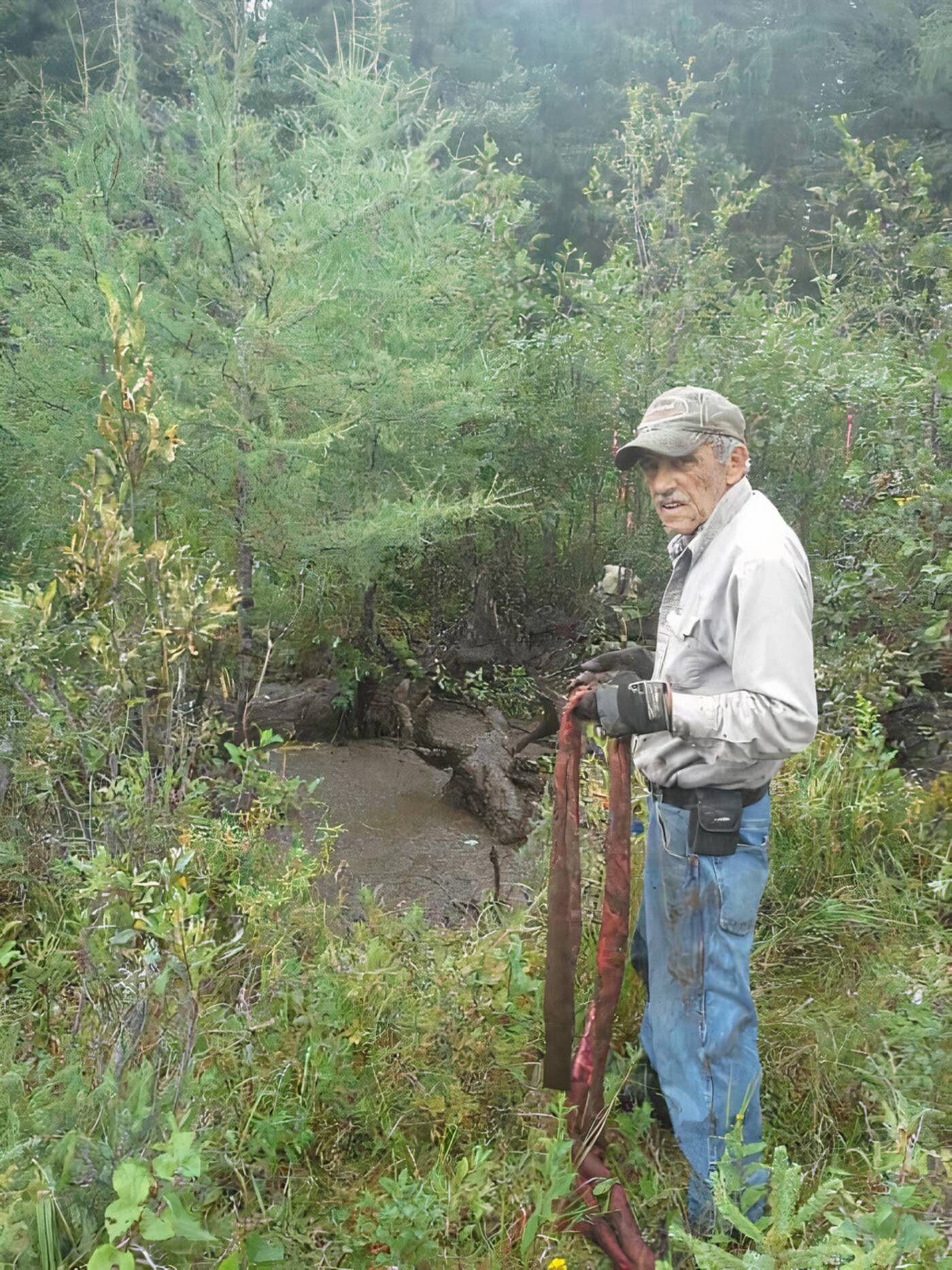 Maurice Vallier of Timmins, Ontario, says he was completely covered in mud after sucessfully saving a moose that had become trapped in heavy mud. Photo by Pat Greba via Bill Desloges.

Vallier and Greba first tried contacting the Ministry of Northern Development, Mines, Natural Resources and Forestry to get help for the poor creature, but couldn't reach anybody.

Knowing that the moose was facing a literal life-or-death situation, the seasoned propsectors got map coordinates from their friend and set out to see what they could do.

It took the pair more than an hour just to clear a path so that they could get an ATV through to the site, which was roughly two kilometres into the bush just off Highway 655. But when they got there, they didn't see any moose — which, at up to 1,500 lbs, are usually quite hard to miss.

"When I got to the trail I couldn't see anything," says Vallier. "Then I looked to the side and all I saw was a head. I said 'Holy Jesus, this thing is really stuck! He's not stuck, he's buried!'"

The moose was clearly afraid of the humans, so Vallier spoke to him in a low voice until he calmed down a bit. Then, with no other options, the men tied a sling around his antlers.

"He started to fight back, tried to reach me with his legs, but couldn't reach high enough," says Vallier. "I felt so sorry for him. His mouth was full of mud and his eyes were full of mud." 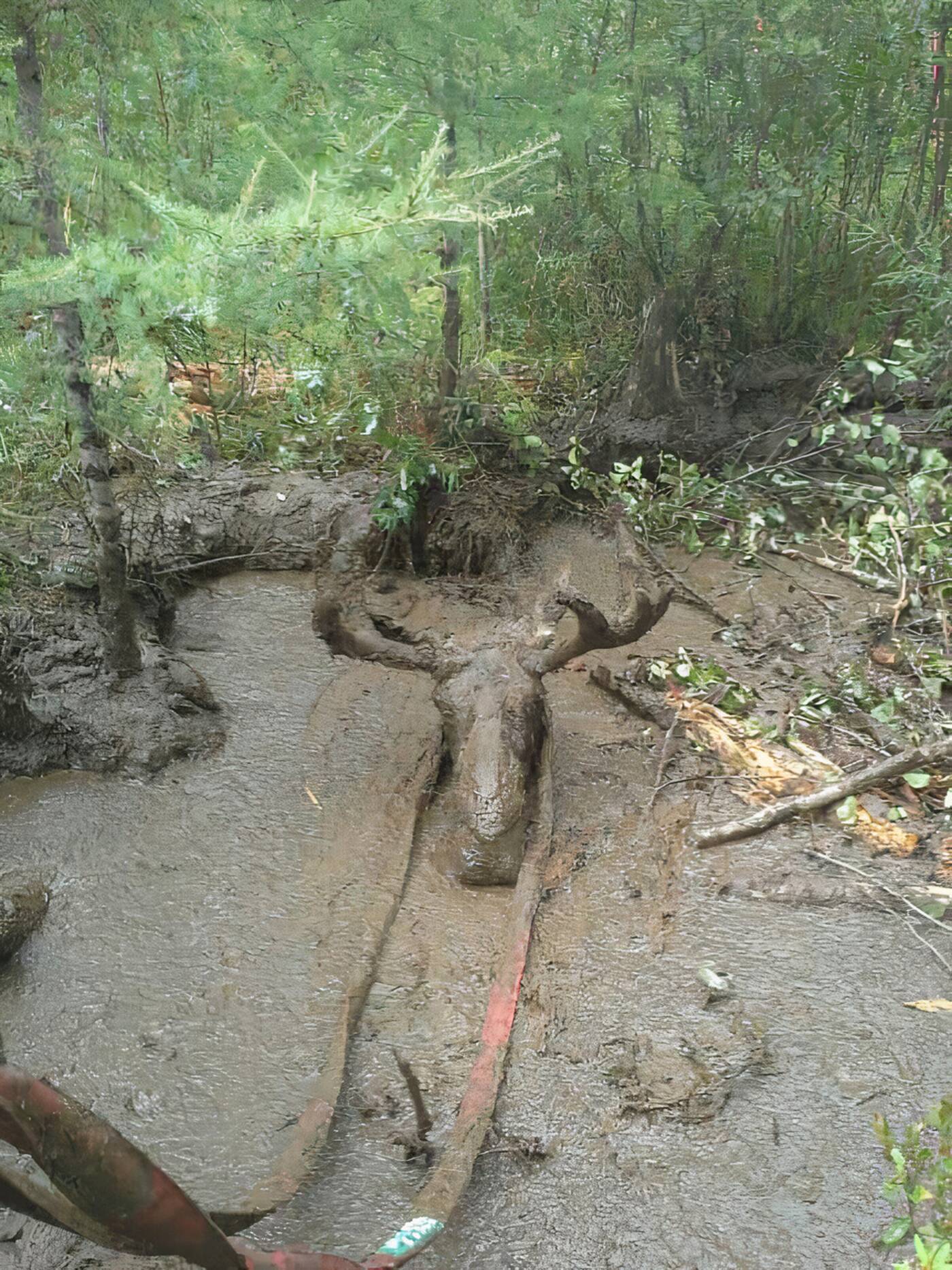 The men almost couldn't find the moose when they arrived to the coordinates a friend had given them, he was so deep in the hole. Photo by Pat Greba via Bill Desloges.

After a first failed attempt at pulling out the moose with an Argo ATV, the men decided to traipse through the bush again to reach another side of the mud hole some 30 feet away. The bank there was lower and covered in moss — better suited for a moose to slide through.

"The second time around, he must have realized we were there to help him, or he was just exhausted, but he calmed right down," says Vallier, crediting his Labrador Retriever for providing the moose with some support.

"The dog just went up to the moose and laid there and put his head down, and the moose looked at the dog and was like 'oh, okay.'"

Eventually, after securing slings around the moose again, Greba and Vallier maxed out the winch. Another attempt in reverse finally pulled the muddy moose up and out of the hole, which Vallier believes was an old concession road that had grown in and was about seven feet deep.

"He was covered in mud," says the now part-time prospector of the moose. "He wouldn't have been able to slide out that easily if he wasn't." 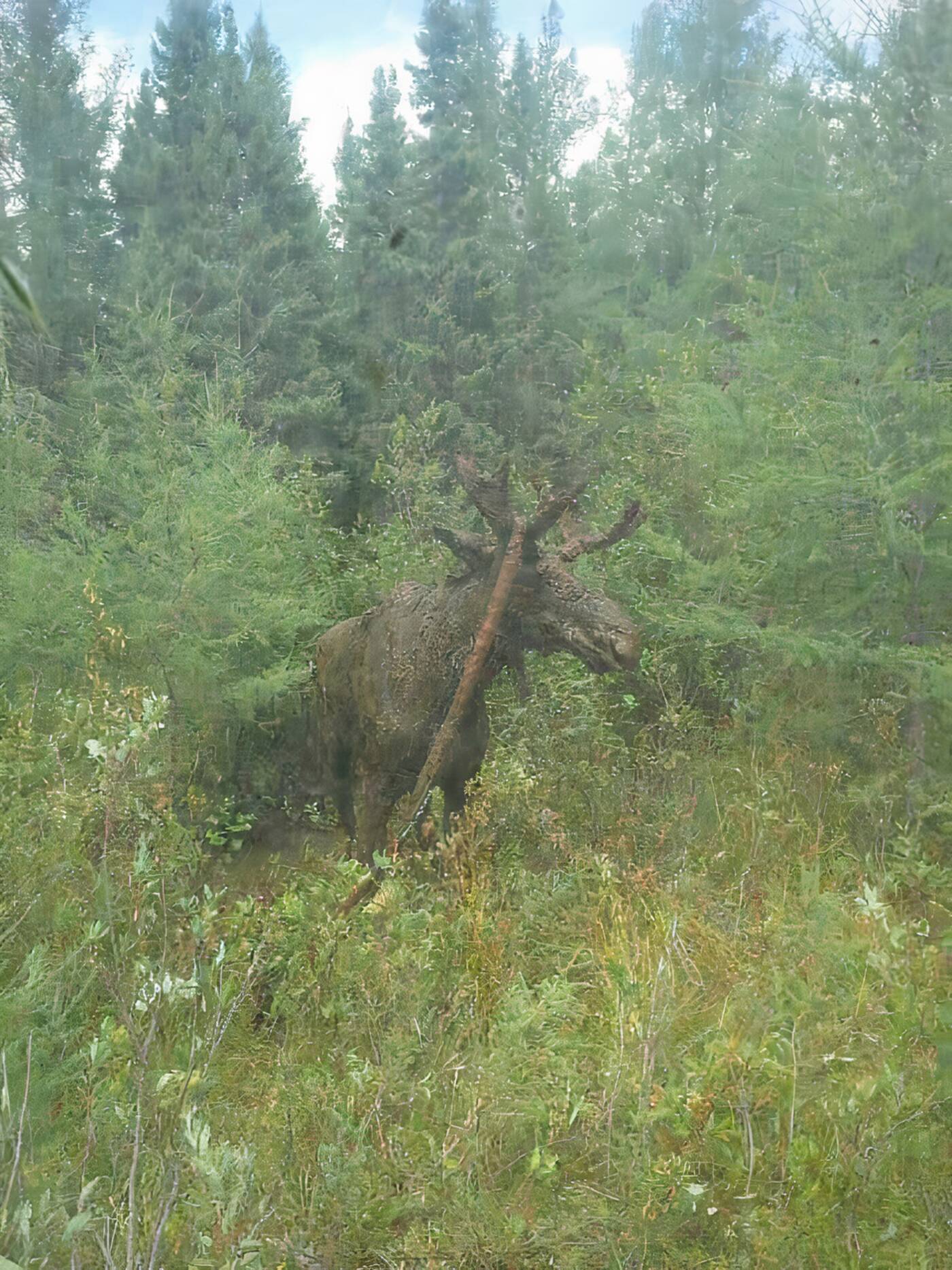 The moose ended up running away with one sling still attached to his horn, but seemed in good spirits and happy to be free. Photo by Pat Greba via Bill Desloges.

Photos taken by Greba and later shared to Facebook by another friend, Bill Desloges, confirm that the moose was indeed absolutely filthy —filthy, but alive thanks to the skills and perseverance of two humans and a white labrador.

Vallier says the moose was trembling when he first came out of the mud pit, weak and completely out of energy. He approached the moose and got a sling off one horn before the seven-foot-tall animal suddenly stood up.

"I ran away to the back of the Argo thinking, 'what if he decides to charge us?'" Vallier laughed, explaining that the moose ended up trotting away with a sling still hanging from one horn.

It's unclear how long the moose was trapped for, but Vallier thinks the animal accidentally stepped into a muddy ditch on the side of an old concession road. "They dig ditches on both sides," he explained. "You can't see it — it just looks like hard mud." 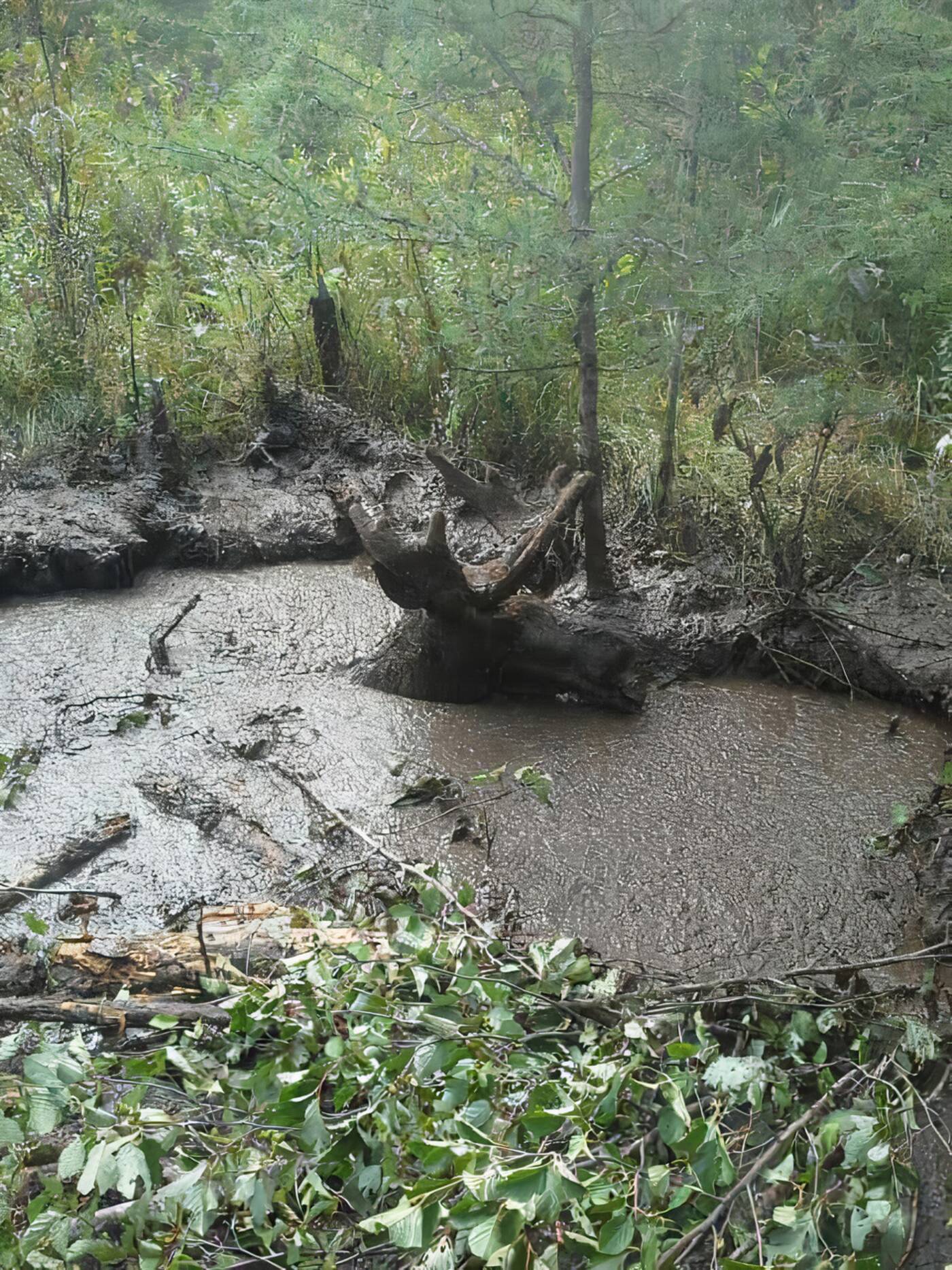 It wasn't easy to get this seven-foot-tall male moose out of a swampy pit, but the animal most likely would have died if Vallier and Greba didn't save him. Photo by Pat Greba via Bill Desloges.

As word of the miraculous moose rescue spreads, many other people are feeling good too, and they're praising both Greba and Vallier and as heroes for saving a beautiful animal's life.

"I'm amazed, I never thought it would go on the internet," says the latter septuagenarian. "Holy jeez, I've had more calls than you can shake a stick at!"

When asked about all of the random people calling him a hero online, Vallier politely shook off the compliment, suggesting that what he and his friend did was no big deal.

"Anybody would have done the same thing," he says. "Half the town of Timmins would have went if they had gotten that call. We just had the equipment."