The latest in a series of ongoing anti-vax protests is once again putting an unfortunate spotlight on Toronto's University Avenue, as demonstrators voice opposition to the province's vaccine passport mandate outside of local hospitals. 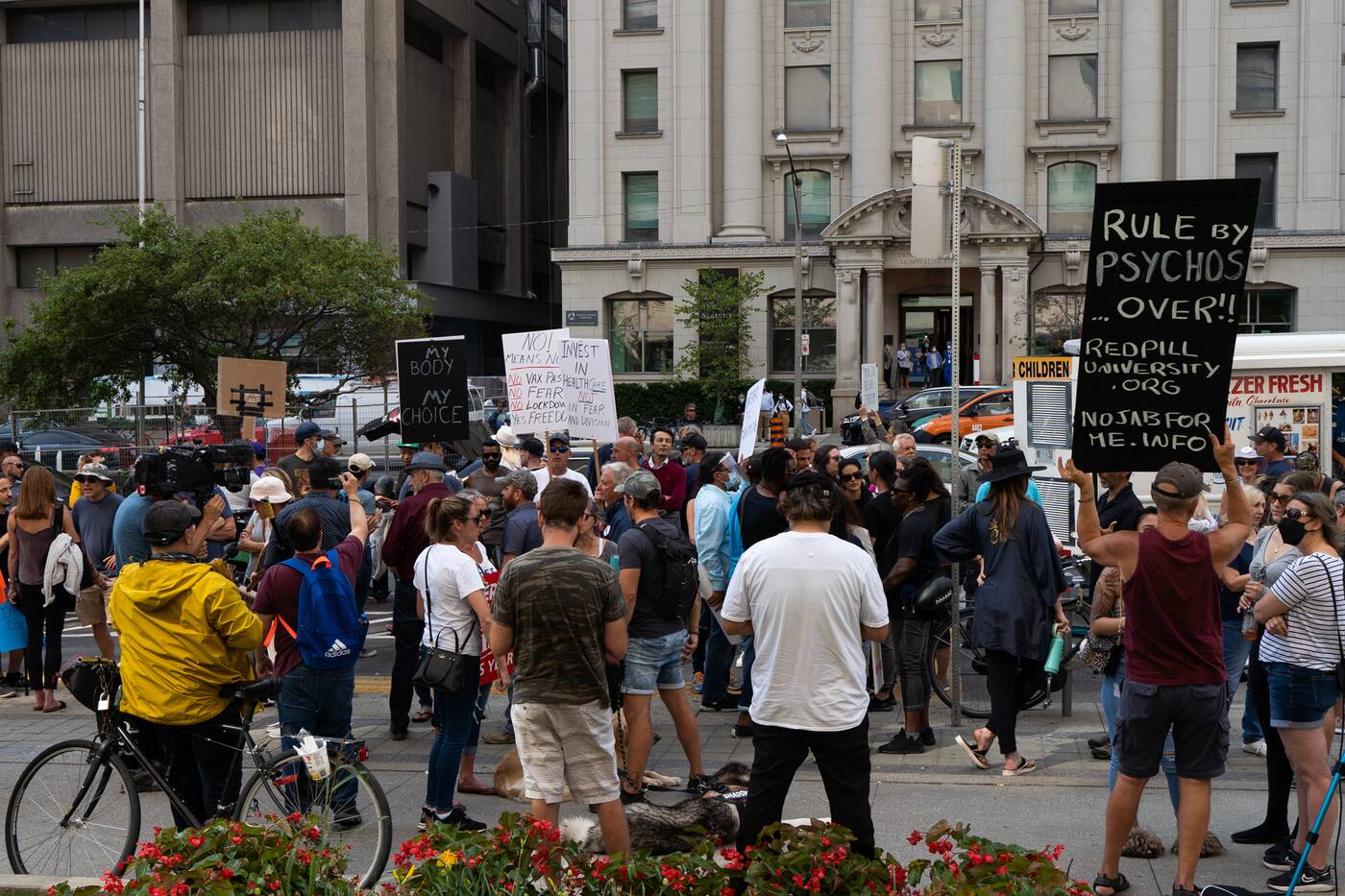 Scenes from Hospital Row show a tense atmosphere, with rows of police guarding hospital access points facing off against loud protesters, supposedly on hand in a show of support to nurses other healthcare workers.

This "support" contrasts sharply against statements from healthcare professionals and hospitals condemning the protests. Among the most recent groups to speak out, the University Health Network (UHN) — which operate sites along Hospital Row — have called the protests "very concerning and disheartening."

The planned protests taking place outside of hospitals today, including UHN's Toronto General Hospital, are very concerning and disheartening.

UHN's Twitter thread on the issue goes on to say that "demonstrations outside of hospitals not only put healthcare workers and staff at risk, but also patients who come to the hospital for care."

Some of the most intense scenes unfolded just outside Toronto General Hospital, where the anti-vaxxer demonstrations were met with a loosely organized counter-protest. 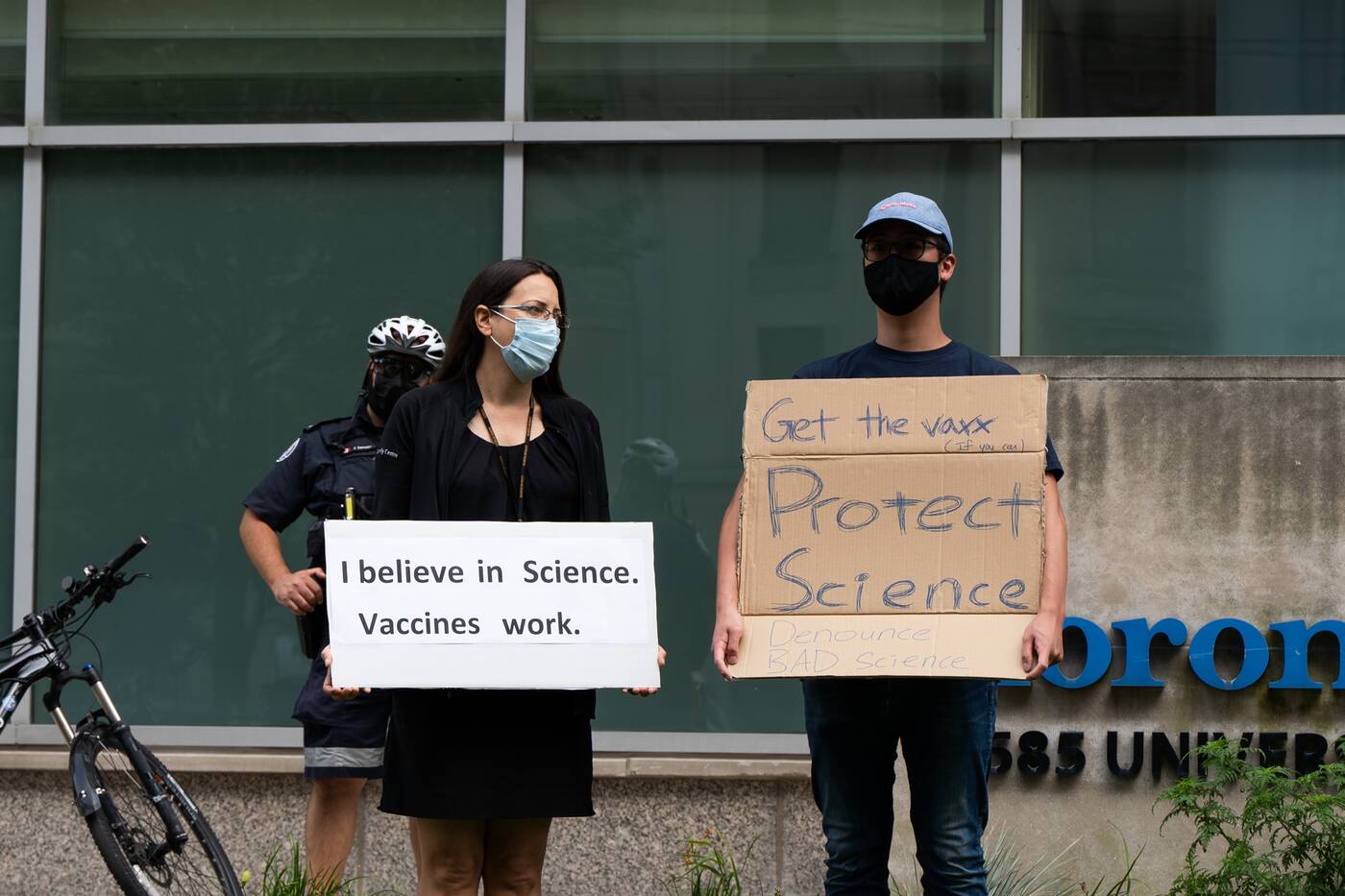 Counter-protesters outside of Toronto General Hospital on Monday afternoon. Photo by Briana-Lynn Brieiro.

David Renzetti is a counter protester, who tells me he felt compelled to attend after the anti-vaccine/mandate protesters began targeting hospitals. pic.twitter.com/sXyqeTk1yX

Many passing motorists also showed their anger towards protesters, shouting names and giving crowds the finger as they rolled past.

Anger is in the air as anti-vax protesters engage in verbal confrontations on Hospital Row - 📹 @brianabrieiro #Toronto #TorontoProtest pic.twitter.com/pv0xr4Iviv

Social distancing was not observed by some in the crowd, with a lot of unmasked hugging spotted. The woman hugging protesters in the video below has been identified by another outlet as Sarah Choujounian, a co-founder with protest-organizer Canadian Frontline Nurses.

Anti-vax protesters on Hospital Row are not social distancing at all, lots of hugging spotted - 📹 @brianabrieiro #Toronto #TorontoProtest pic.twitter.com/L2BL1eRLh5

Canadian Frontline Nurses claims to act in the interest of healthcare workers with a goal to "restore [their] freedoms and rights as Canadian citizens."

Police were spotted managing crowds, approaching closer when arguments got too heated and asking people to step back and clear pathways when necessary.

Police were also active in leading people who needed to get in and out of the hospital safely through the crowds. 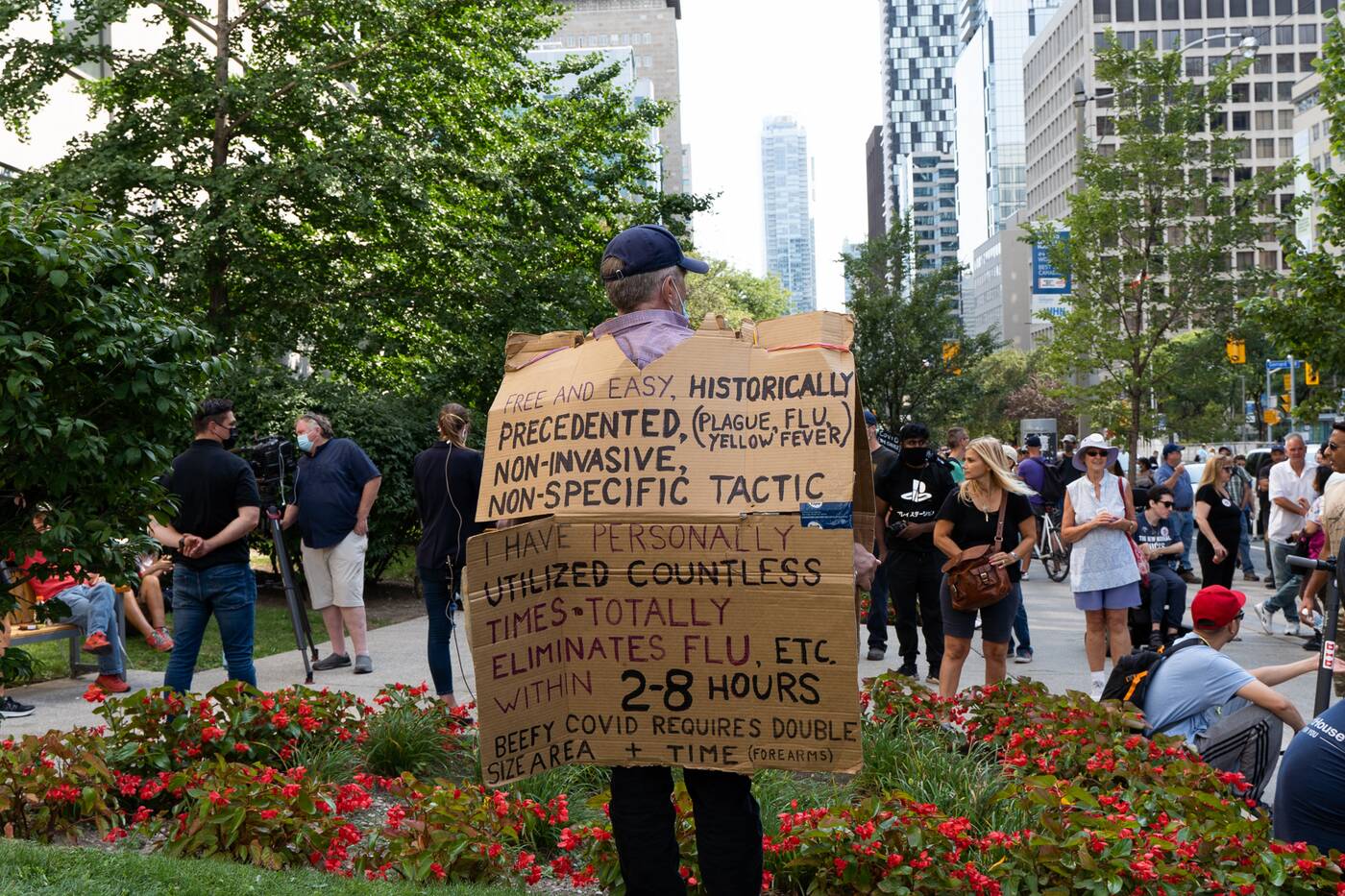 The same group responsible for some of today's hospital demonstrations held another protest earlier in the day, a "silent vigil" against the province's vaccine mandate outside of Queen's Park.

A look behind the silent protest against vaccine mandates at Queen’s Park.

Although the group identifies itself as “frontline workers” & “first responders,” at least a few individuals in the crowd have been identified as working in other sectors altogether.#cdnpoli #Elxn44 pic.twitter.com/VpQNvN1zA9

Unlike the mostly silent Queen's Park vigil, the University Avenue protest was decidedly loud. All the while, hospitals lining the street had to contend with this noise as doctors and nurses tried to care for patients, and patients tried to rest and recover.