A controversial new transit line planned for Toronto was given a big boost today, though the overdue infrastructure upgrade is not generating the same excitement as when first pitched to the city years ago.

The Ontario government and the city announced the signing of a revised "Ontario-Toronto Agreement in Principle" today that advances plans along for Mayor John Tory's proposed SmartTrack line. 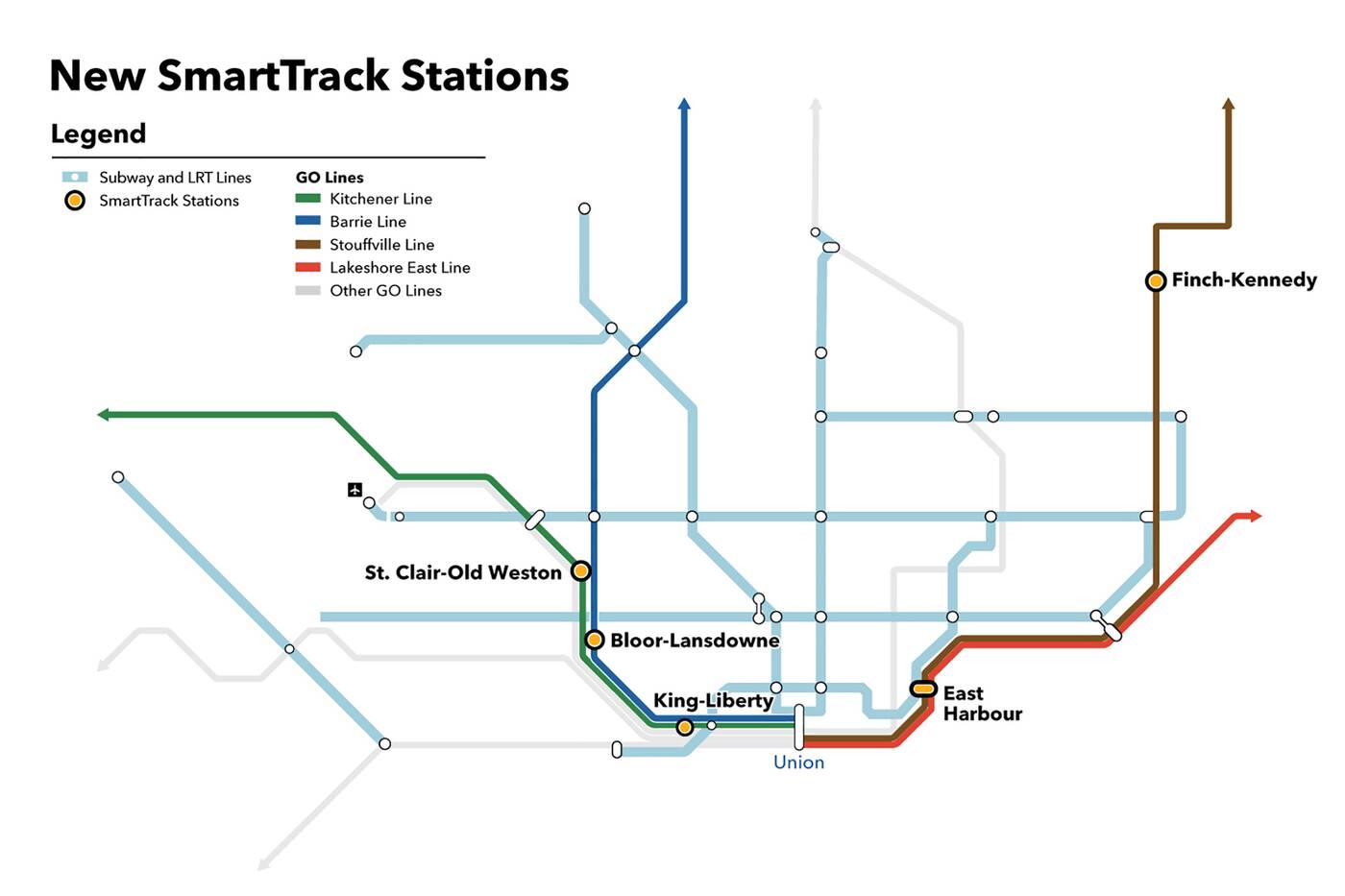 Map of the planned SmartTrack route. Image via Metrolinx

"Through this new agreement, we are working alongside the Government of Ontario to deliver SmartTrack stations that will help us get people moving across Toronto," said Tory.

"The SmartTrack Stations Program will transform existing rail infrastructure in our city from a regional commuter service into an urban rapid transit network that will greatly benefit our residents and give them more transit options."

Tabled by John Tory in 2014 as a 22-stop rapid surface rail route using existing GO rail corridors — a cost-saving transit plan that helped get the now-Mayor elected for a first-term — with an aim to have trains moving by 2021.

This date has come and gone, and construction of the line has yet to begin. Planning and negotiations have seen the line since whittled down to a shell of the grandiose vision initially sold to the masses.

SmartTrack was eventually approved in 2016 with seven stations before dropping down to five stations in the current plan. Stations are now planned at St. Clair-Old Weston, Finch-Kennedy, King-Liberty, Bloor-Lansdowne, and East Harbour, to be serving commuters in 2026.

"We know that we cannot deliver vital transit projects on our own, by working with the other levels of government we can ensure that we are moving quickly to expand our transit system, relieve congestion, increase transit accessibility and create new economic and employment opportunities for residents," said Tory.

Detractors have been quick to point out that the current plan bears little resemblance to what was initially promised.

“We’ve just decided to stick the SmartTrack name on yet another idea, and we’ll keep doing it until something is built and someone can take credit”.

Others stress that these will just be GO stations in urban settings and not a proper upgrade to the TTC.

They aren't gonna be different than any other GO station

Despite its apparent shortcomings and over-promising, the SmartTrack plan would make commuting much more accessible for many while leveraging 40 kilometres of existing track to create new transit at a much lower cost than traditional options like subways.

"In the past, our transit maps have not kept pace with the growth in the Greater Toronto Area — that's why this agreement with the City of Toronto and our federal partners is a key step that will offer more route options and reduce travel times," said Stan Cho, Associate Minister of Transportation.

The line is planned to attract an average weekday peak of 24,000 boardings and transfers by 2041, attracting 3,400 new daily riders to Toronto's rapid transit network.

"When these five stations open, it will be good news for everyone: workers will spend less time communing; parents will be home quicker to their families; Jays fans will make it to the Rogers Centre easier," said Cho.