Though Airbnb is a great, often cheap alternative for travelers who want to experience a new city as if they themselves live there, the short-term rental app also unfortunately lends itself well to people who want to throw a house party in a cool downtown condo that is not their own.

The California-based company has been making new efforts in recent months to curb bookings that may lead to complaints from hosts and neighbours, as well as to a gamut of troubling incidents, from bottles dangerously whipped from balconies to shootings.

In February of last year, the lodging brand decided to launch a 24/7 telephone hotline for concerns, while also moving to prevent guests under the age of 25 from making local entire-home bookings in Canada.

By the summer, it began to suspend problem listings in Ontario that had led to complaints or otherwise violated policies.

Now, the app has announced that will be doing the same for the next upcoming holiday, Halloween 2021, which is one of a handful of days that the brand says is "known for party-type behaviour."

.@Arbnb is banning bookings of whole homes on single nights during the Halloween weekend in the U.S. and Canada in an effort to curb house parties. Except if guest has positive track record otherwise on Airbnb. It's the prob that doesn't go away.

Based on the success of such measures last year, the company announced on Tuesday that it will yet again "institute restrictions on one and two-night stays in the U.S. and Canada for entire home listings while also utilizing our other robust party prevention systems."

These systems include the aforementioned hotline for neighbours, removal of notorious "party houses" from the platform and a mandatory clause guests must agree to before booking that states the company's ban on large and disruptive gatherings, contravention of which may lead to account deletion and legal action. 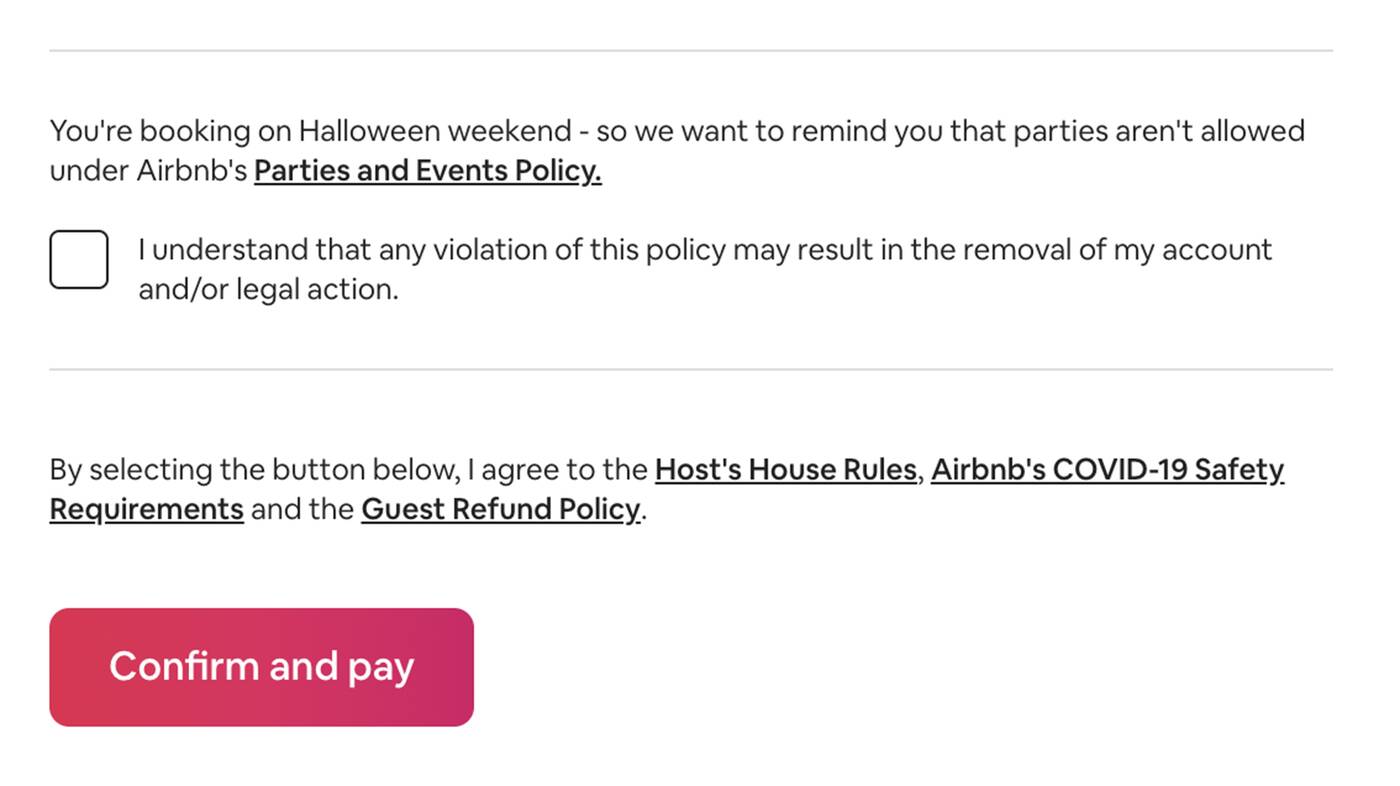 The clause that prospective guests will have to agree to in order to book on Halloween. From Airbnb.

The rules will only apply to guests who do not have a history of positive reviews on Airbnb, and to one-night reservations of entire homes or two-night reservations that "may pose heightened risk for parties," such as last-minute bookings and/or ones made by people who live locally.

"We estimate that our efforts resulted in a drop in incidents such as unauthorized parties by over 49 percent for Halloween and over 51 percent for New Year's Eve 2020," the company wrote in a release announcing the return of the measure.

"Our party ban has become a foundational component of our trust and safety strategy, and we are continuing to invest in products and systems to complement that policy and promote safe and responsible travel."

Trynna get an Airbnb for Halloween weekend! Who’s down??

Thankfully for the people who live here, but perhaps not for those looking to visit, the pandemic and new Airbnb regulations have meant a whole whack of short-term rentals in the city have been converted by their owners into actual apartments for long-term residents.

There could, however, still be thousands of listings that aren't operating in accordance with the rules.