Nobrega's Variety, one of Toronto's most beloved neighbourhood bodegas, is permanently closing after more than half a century on Dovercourt Road.

The local corner store at 209 Dovercourt Rd. will be shuttering permanently following a rent hike by the building's new owners.

The family that runs Nobrega's, who did not want to be named for the article, confirmed the shop's last day will be June 10.

News of the convenience store's imminent closure has rocked the Beaconsfield neighbourhood, which has relied on this family-run one-stop shop for years. 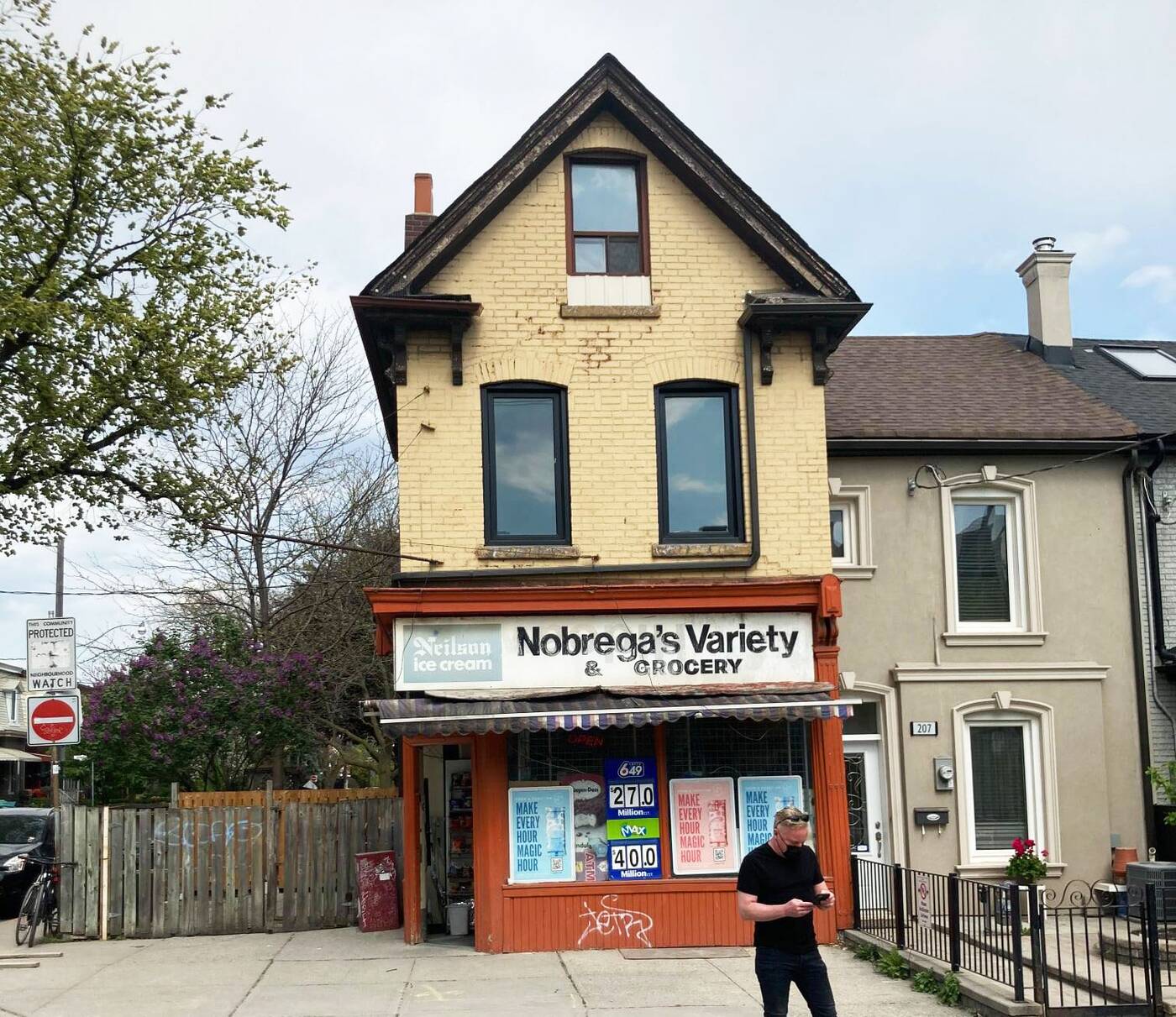 Nobrega's Variety will be closing permanently on June 10. Photo via Jonathan Nodrick.

"Everyone in my building goes in there in their pyjamas at any time of the day to get random stuff," says Jonathan Nodrick, a resident of the Argyle Lofts, a tight-knit building of about 80 units.

"These guys are the epitome of what we're trying to hold on to."

Nodrick, along with other community members, say they were shocked to hear from Nobrega's owners that the convenience store may soon be replaced by a sandwich shop.

Just earlier this week, Nodrick and his neighbours at Argyle Lofts, along with other residents in the Osssington area, raised $1,250 following a break-in at the convenience store that saw a window broken and stock stolen several weeks ago.

When Nobrega's owners were given the envelope of cash, they were shocked, says Nodrick, and insisted the money be donated to SickKids Hospital instead before they were convinced to accept. 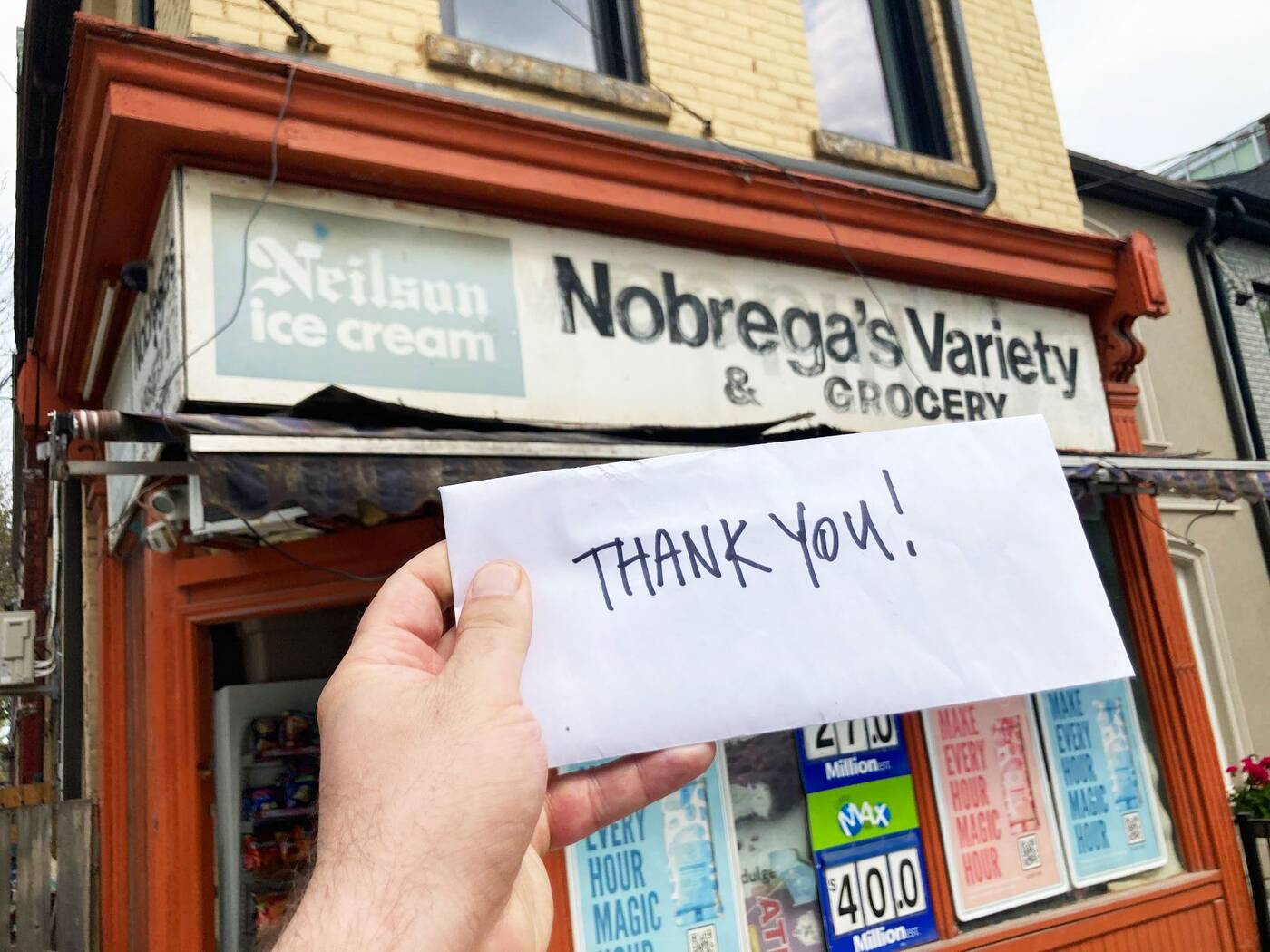 Residents of the neighbouring area raised $1,250 for the business after being broken into several weeks ago. Photo via Jonathan Nodrick.

But a few days later, a sign went up outside the building saying 209 Dovercourt Rd. was for sale. Within a matter of days, the building had been sold.

It's unclear who the new owners are and what will replace the convenience store after the space has been renovated. Nobrega's owners confirmed to blogTO that they're closing up shop because their rent had doubled.

With nothing but a 7-Eleven or Shoppers Drug Mart nearby, the neighbourhood is lamenting the loss of a locally loved business (so much so that someone made a miniature of it) that's kept nearby households stocked up and afloat, particularly during COVID-19 and over a year's worth of lockdown.

"This couple has been there for the community all through the pandemic and I am devastated for them and really discouraged by the new owners' actions towards a family business," says Kathleen McLeod, who has lived on Foxley Street for the past three years.

But even prior to the tenure of the current owners, the rust orange-coloured shop has served as a small business anchor off Little Portugal. 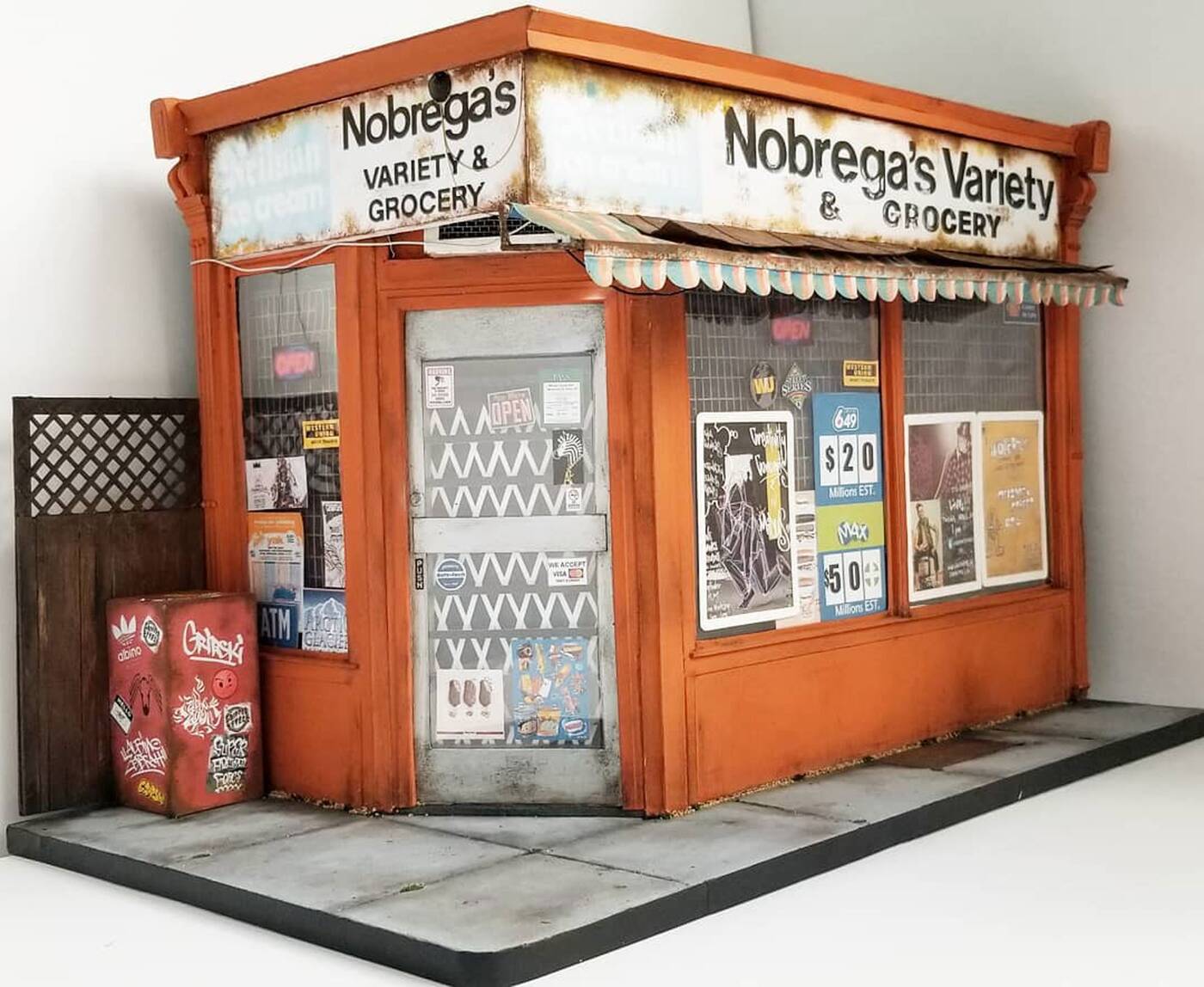 It was Mario Nobrega, an immigrant from Madeira, Portugal, who first opened the shop in 1968, after arriving in Canada in 1953.

He eventually took over a convenience store called Norm's on Dovercourt with his wife Maria Suzete and renamed it Nobrega's. The couple lived on the upper floors of the building with their four children and worked downstairs during the day.

"My dad wanted to make good in Canada and he got his dream to own his store," says his daughter, Gilda Nobrega Martens, now 63.

Martens remembers working in the shop with her dad, who ran the business from 8 a.m. until midnight. Back then, Nobrega kept veggie carts out front, like the shops in Kensington Market, and sold ice cream in the summer.

The convenience store opened right before the main influx of Portuguese immigrants landed in and around the Dundas West area and served as a local shop for groceries as waves of newcomers settled there.

In 1981, Martens says her parents split up and sold the shop. "My dad was so devastated by the loss of that store," she says. Since then, a number of different owners have taken over Nobrega's.

Julie's Cuban, the restaurant across the street often associated directly as the spot across from the convenience store, has become Bernhardt's. The Nobrega sign may come down soon enough.

Martens says she and her sister both considered buying the shop back when the building went up for sale, but within a blink of an eye, it was sold.

"I'm really glad [the community] took to that store, it makes sense," sayts Martens. "Nobrega's means a lot. It's really too bad.... We could have figured it out of we had more time."