A swath of land in the downtown core that has long served as a parking lot for the Entertainment District is now set to become so much more enjoyable.

The paved 28,300 square foot lot at 229 Richmond St. W. — which many will remember from last summer, when it was transformed into the city's biggest patio — is set to be redeveloped into an urban park, a paramedic post, a condo tower with an affordable-housing component, and 10,000 square feet of community space for various uses.

The fire station at 260 Adelaide St. W that currently abuts the property will also be relocated.

This week the @_CreateTO Board adopted our plan to revitalize the City's Fire Hall at 260 Adelaide, along with the parking lot at 229 Richmond – and activate these sites for affordable housing, parkland, and community services. This is creative city-building at its best.

The City acquired the property a few months ago with plans to make it into a giant green space, but potential additional uses have been suggested, including, at one point, putting in an underground parking garage.

As the Toronto Parking Authority (TPA) pointed out earlier in the year, the lot is indeed "located in a high demand area for parking, but is underserved with municipal parking."

As revealed in the latest proposal for the project, which is helmed by CreateTO, current plans do encompass a below-grade parking facility of some kind to be funded and operated by the TPA. 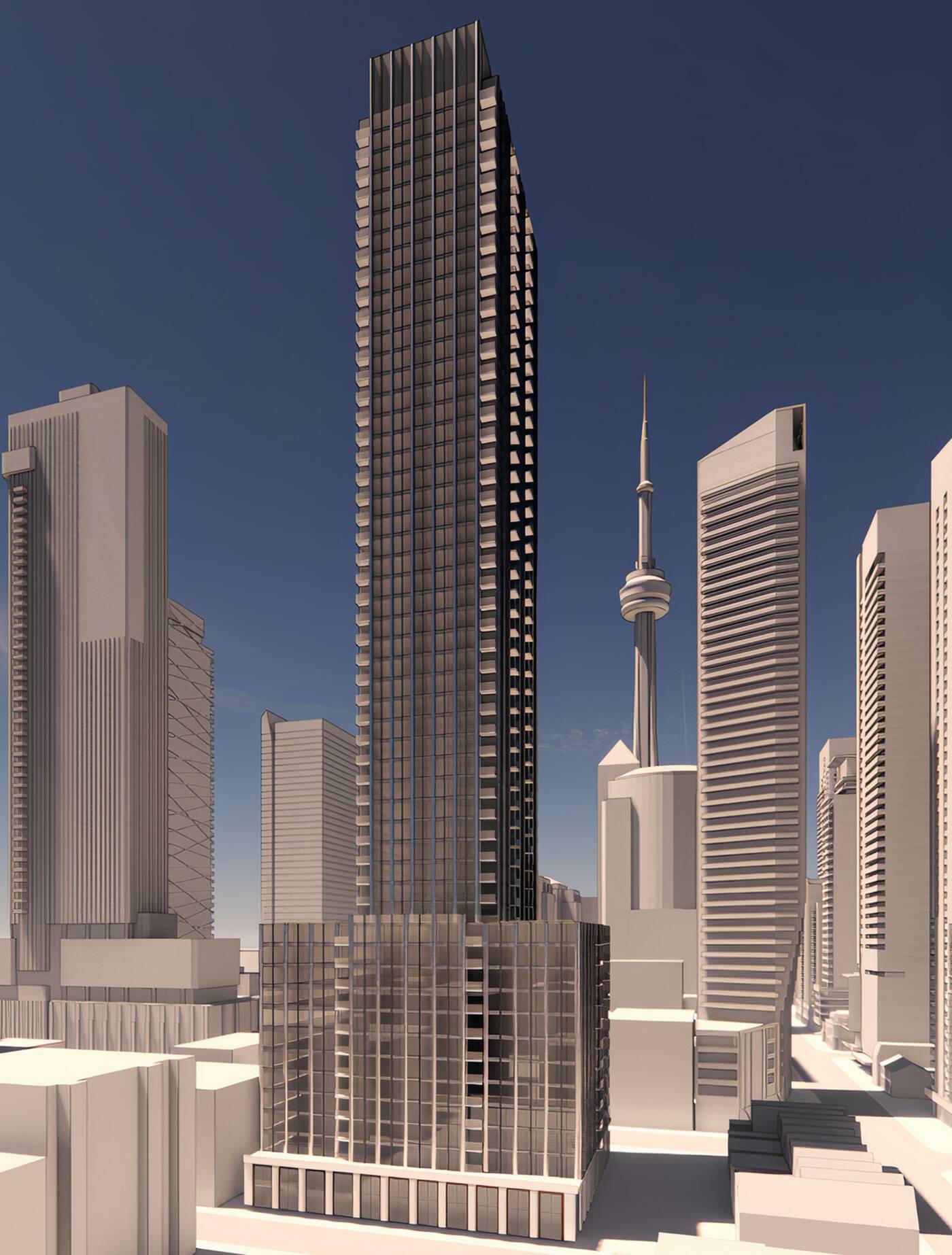 An early rendering of the housing tower coming to 260 Adelaide St. W. From CreateTO.

The housing component will provide approximately 652 units in a new condo tower at 260 Adelaide, of which around 30 per cent will be designated affordable housing, something the city has long been in dire need of.

An adjacent property at 254 Adelaide, currently home to Urawa Japanese Restaurant, will also be handed over to the project.

The fire station will be moved to the Metro Hall property at 55 John Street, and upgraded. 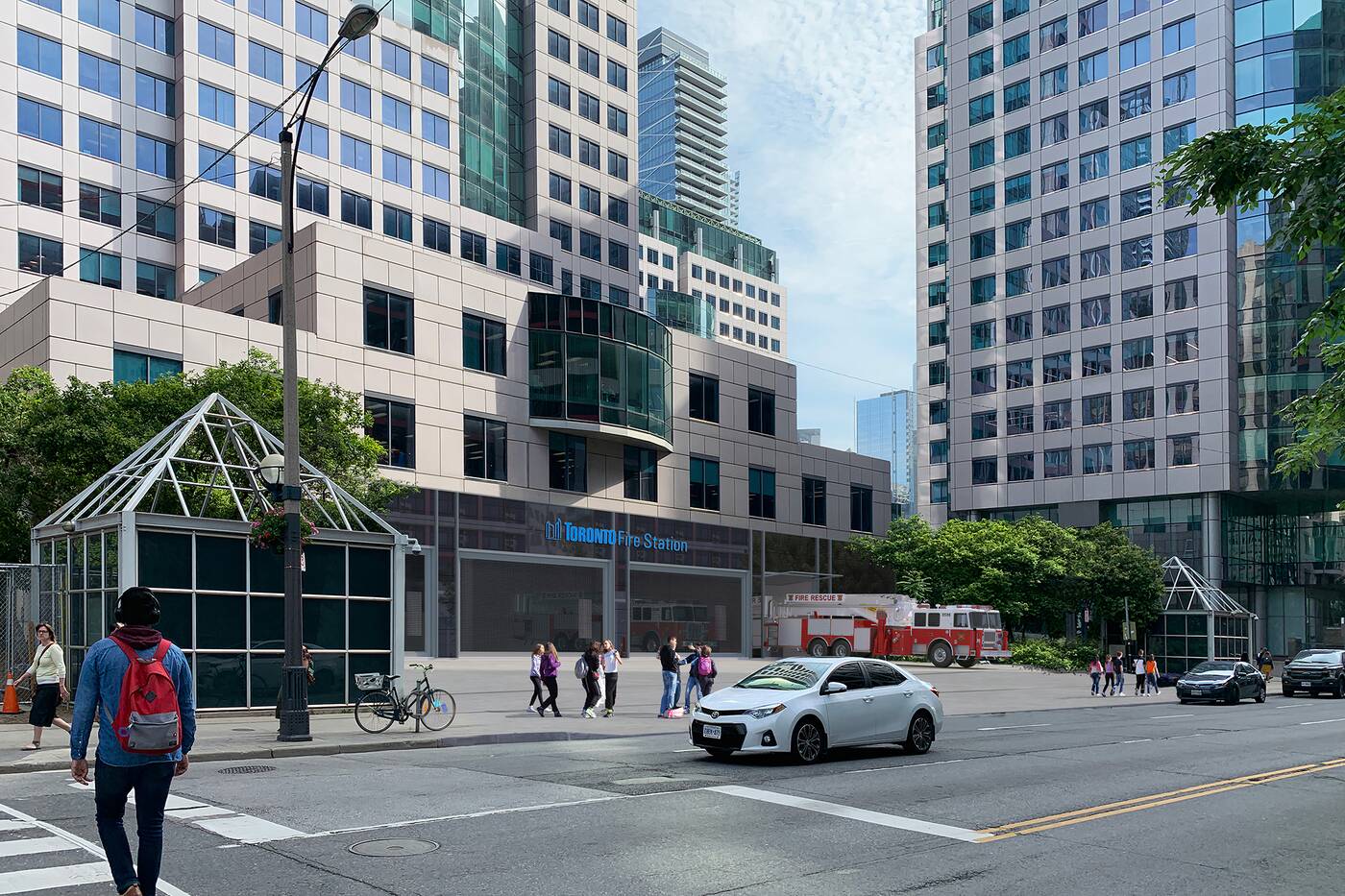 The fire station at 260 Adelaide St. W will be moved to Metro Hall at 55 John Street. Rendering from CreateTO.

As Mayor John Tory said in a press release on Friday, "this addresses program needs for numerous City divisions and it will create a range of City-building opportunities, including the potential for affordable housing in the downtown core, addressing the state of good repair of City infrastructure, and the potential to create a new park and an EMS facility."

The project is being hailed as a creative use of space while also saving resources, rather than demolishing and rebuilding the current fire house, which is the busiest in the country.

It is also just one of multiple similar initiatives — a nearby parking lot at Richmond and Spadina is also slated to become a green space, as is one at Queen and Augusta.

This will be the first new, large park in the area in 20 years. During this time, the King-Spadina community has grown from 230 residents to a projected 44,000 people, once current development is complete. We clearly need more greenspace and parkland for people in our community.

The news is something that multiple city councillors have been hoping for, especially now that the need for more public green space has been made even more apparent by lengthy lockdowns and stay-at-home orders.