The last month has seen a shocking number of business break-ins affecting multiple neighbourhoods in Toronto.

At least 20 businesses ranging from restaurants to cafes, retail stores, hair salons, bars and a garden centre have been hit in recent crime sprees, as confirmed by blogTO.

A number of those stores had cash stolen, others did not. But all businesses say they'll have to pay hundreds to repair the many glass windows and doors broken during the break-ins. 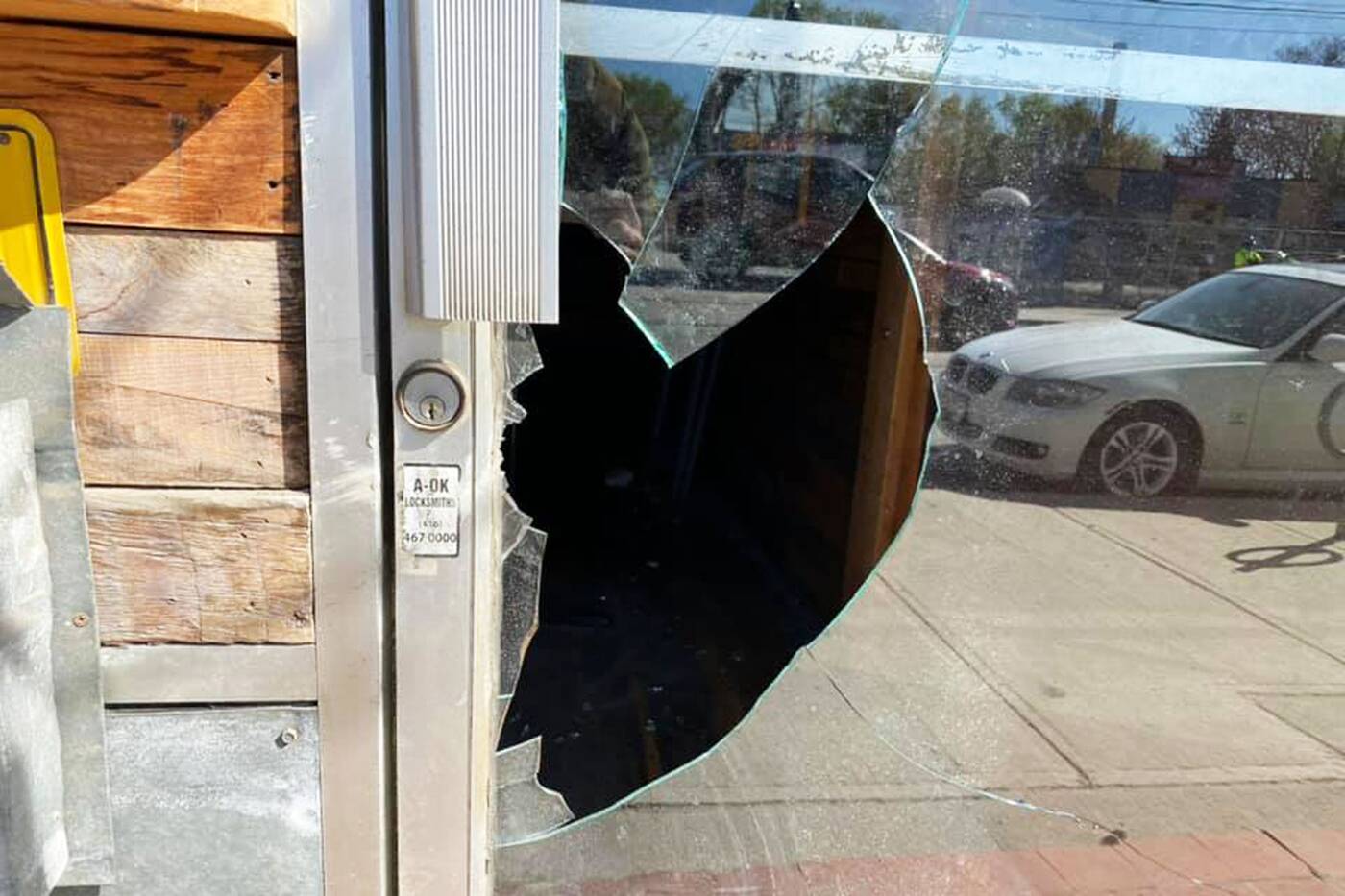 Queen St. East restaurant Triple A Bar had its door smashed over Mother's Day weekend. Photo via Triple A Bar.

Yesterday, Simple Coffee shared security footage of a perpetrator smashing their front door with what appears to be a bolt-cutter.

Owner Jason Potzinger says nothing of value was taken from the cafe, but it could cost him up to $1,000 to get the door fixed.

"There should be a necessary response from the police to be more mindful of the businesses on Queen Street," says Potzinger.

"They already knew there was a string of them just west of us so it would make sense to track patterns and hopefully patrol the area."

Further west on Queen Street, the Leslieville gift shop Side Kitchen remains closed after having its window broken on Monday.

The store told blogTO that the perpetrator ransacked the tables, went through the fridge and stole $50. The store owner hopes to reopen this weekend, but will have to pay for new signage and a window.

Owners of East End Garden Centre say that their register was already empty, so no cash was stolen during their break-in last weekend, but owners say they'll have to spend hundreds to board up their windows while repairs go through their insurance company.

The list goes on. Indie Ale House, broken into on May 7, had $15 stolen but will have to pay $1,000 in front door repairs. Billy's Burgers on Pape Avenue had up to $500 in cash stolen on May 10 and says they'll have to pay nearly twice that in damages. 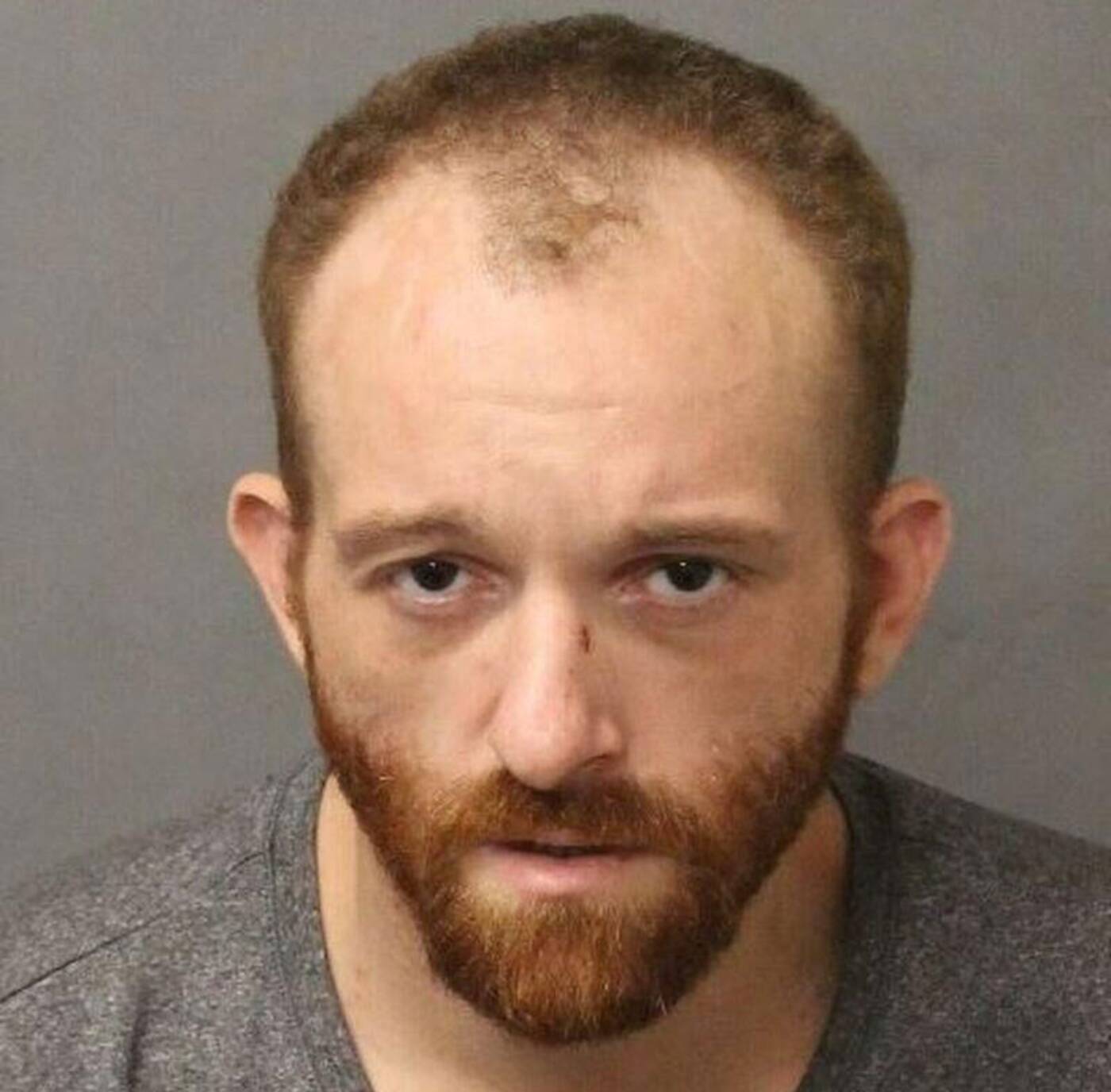 Toronto Police are searching for suspect 41-year-old Wade Joshua Meyers, wanted in connected with a number of the break-ins. Photo via Toronto Police release.

Of the many businesses that confirmed break-ins to blogTO, at least 10 of them have been attributed to one suspect, though Toronto Police could not confirm exactly which break-ins specifically.

Police are still looking for a 41-year-old man named Wade Joshua Meyers in connection to four break-ins in the Dundas West area on May 1 and May 2, and at least six in and around Leslieville over Mother's Day weekend.

Meyers may also be connected to incidents that took place between April 13 and May 1 around Dundas and Ossington, according to a TPS release, though that has not yet been confirmed. 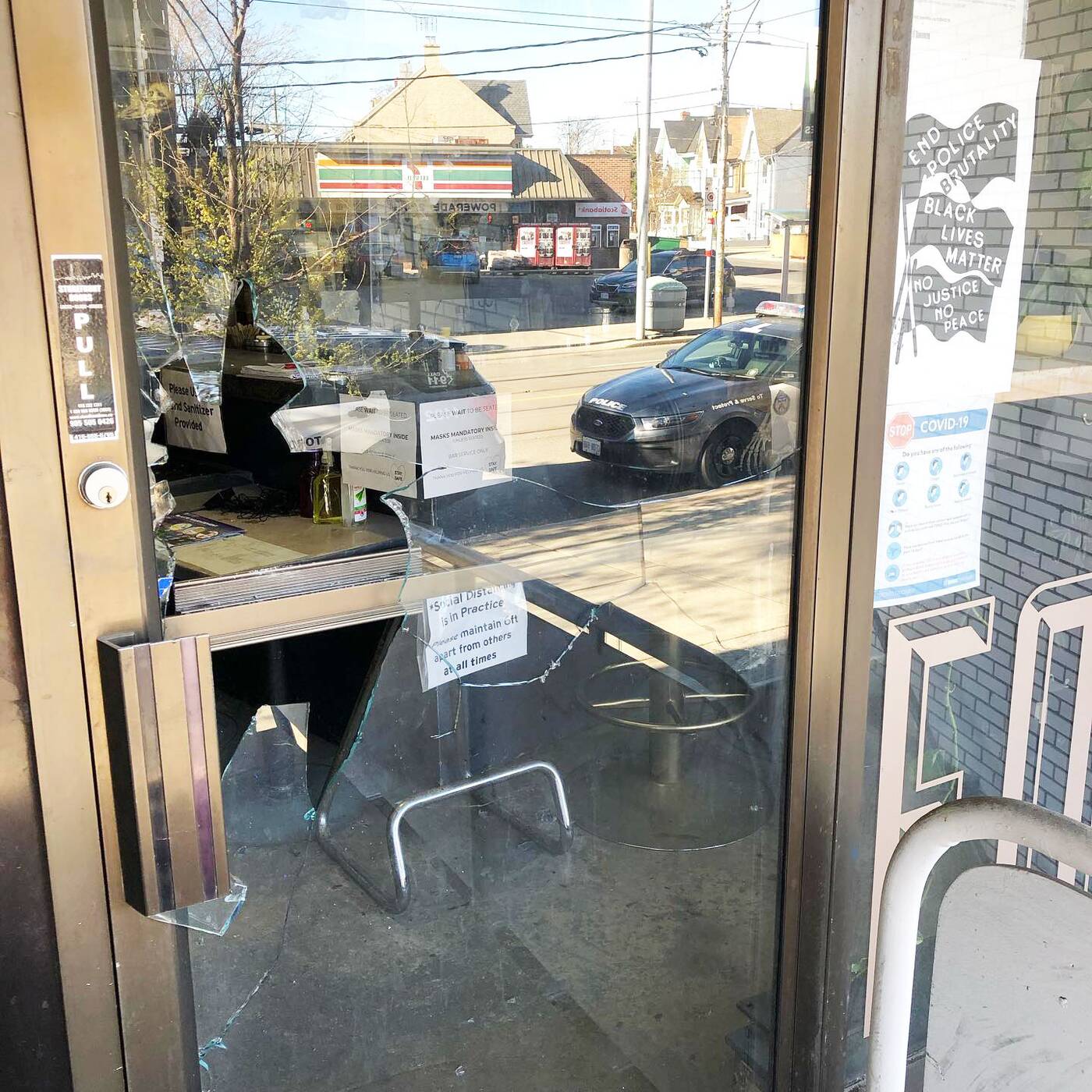 Fountain on Dundas Street shared a photo of its broken door on May 1. Photo via Fountain.

Dundas Street bar Fountain was one of a slew of businesses that was broken into during that two-week period. The bar's owner, Bernard Delany, said the perpetrator broke the glass of the front door and stole 15 bottles of alcohol sometime on May 1.

Three minutes' walk away from Fountain, Woofdawg and Hola Luna had their shared front door broken that same day. Owners say they had a camera stolen along with a package of hot dogs.

Businesses in Parkdale and on Roncesvalles are also feeling the hurt. Someone threw a brick through Made You Look on Thursday and stole the jewelery store's window display trinkets. The owner says police also took DNA samples from blood left on the glass.

According to Toronto Police spokesperson David Hopkinson, the investigation is still ongoing.

In the meantime, members of some neighbourhood and restaurant Facebook community groups are rallying together to offer support to businesses recently affected by crime.

Potzinger says Simple Coffee has seen a wave of support since yesterday morning, from Instagram DMs to increased walk-ins. He posted a video Thursday to thank his customers.

"Some people are giving bigger tips than we asked for, which we didn't ask for, but was really sweet," he says to blogTO.

"I think people just see that we care about our customers and they have in turn just checked in on us as though we're their friends and family, not just another business."