A good samaritan who was simply trying to bring joy to pups and their owners during lockdown has been left gutted after someone stole everything from the front lawn dog cafe she'd set up for thirsty pets in her neighbourhood.

Kaya Kristina's pit stop for pooches on Indian Road Crescent has been offering up fresh water, sticks and tasty gourmet treats for those on their way to and from nearby High Park, and has quite understandably become a huge hit in the community during the months it's been operating.

Her Instagram account @highparkpups, full of photos of local doggos happily posing in front of her "Starpups Coffee" menu, is a glowing testament to the positive impact her little stand has had — while what took place on Monday evening is a testament to how crappy people can be.

All of Kirstina's work was crushed when someone decided to run off with her dishes, treats, signage, and everything else that comprises her set-up.

Kristina yesterday issued a call in the Bloor West/High Park/Junction Community Facebook group for front porch camera footage from the area, saying that the theft took place around 11:20 p.m. the night before, and that the perpetrator continued on despite actually being caught in the act. 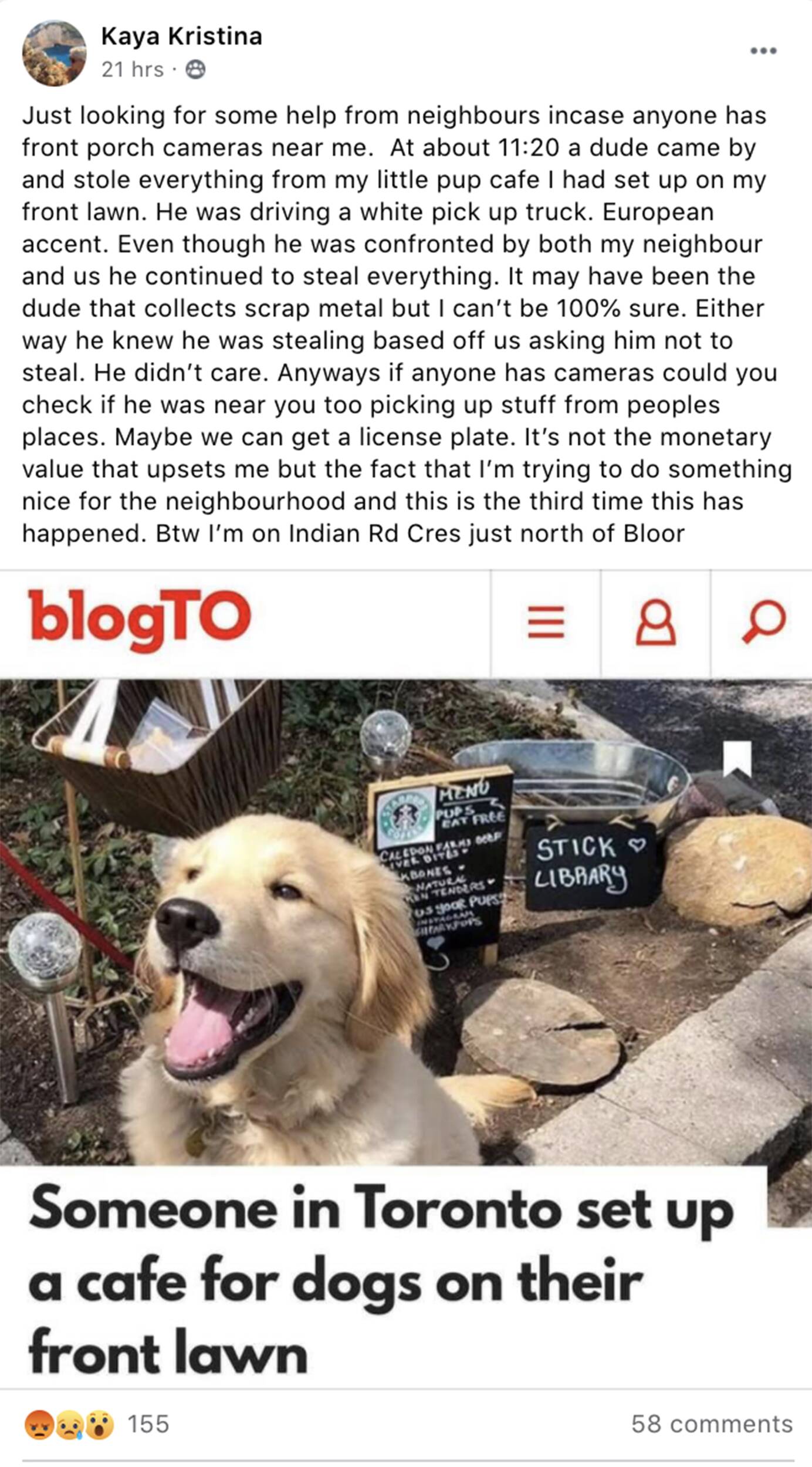 "Even though he was confronted by both my neighbour and us he continued to steal everything... he knew he was stealing based off us asking him not to steal. He didn't care," she wrote in the post.

"It's not the monetary value that upsets me but the fact that I'm trying to do something nice for the neighbourhood and this is the third time this has happened."

In less than a day, she's received an outpouring of support from those who share her outrage, with some even offering up donations of money and supplies to help out.

She's also vowed to continue running the cafe despite being heartbroken over the whole odeal, though she says it may look "a little shabby" with fewer furnishings for now.

"It just bums me out that someone could be that selfish," she replied to one commenter on the thread, adding her deepest thanks for everyone's kind words.

" I won't let this A**hole ruin it for the neighbourhood pups and their owners. Even if it doesn’t look as nice as before, I'm gonna continue no matter what."

The only details Kristina has been able to offer up are the fact that the thief was a man in a white pickup truck with a European accent. She is still awaiting additional info or security camera footage to help track him down.