A photo of an overcrowded TTC bus during an early morning commute has gained a lot of traction online this week, so much so that Toronto's public transit agency is now considering increasing service on at least the route in question.

The photo, taken on the 300 Bloor-Danforth bus at around 5 a.m. on a weekday, shows riders with little standing room and packed together with no physical distancing as they head to work.

Taken by an employee of a meat production plant, it is especially concerning given that settings such as warehouses, factories and construction sites in Ontario have proven to be the source of most outbreaks, yet are continuing to operate with the same measures in place while the rest of the province is under a stay-at-home order.

"I wanted to share this picture from this morning because my commutes, like many essential workers, have turned from frustrating to literal nightmares," the original poster, Daniel Monich, wrote on Facebook alongside the photo on Monday.

"I am commuting far distances through some of the worst numbers yet. I work in one of the worst industries hit by COVID... In my 10 years of taking transit in this city, I have never seen more collective exhaustion and fear than I have now." 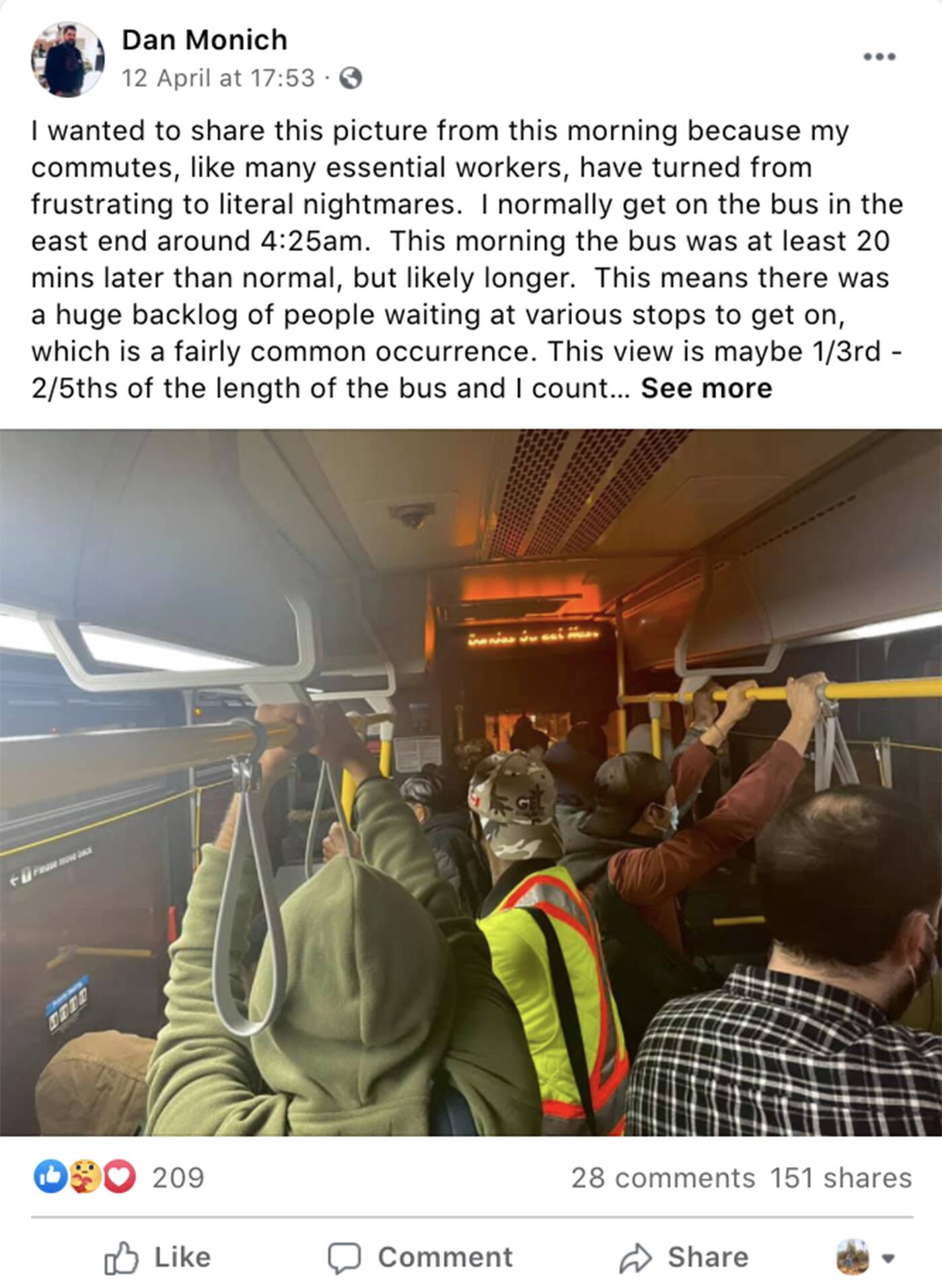 Essential worker Dan Monich shared a now-viral photo from his early-morning commute via TTC bus on Monday. Image via Dan Monich on Facebook.

Those watching rising COVID-19 case counts that have spiked over 4,000 per day in Ontario amid a provincewide emergency shutdown are shocked that this type of congestion on a public transit vehicle is happening at all, let alone regularly.

The bus in question has been at least 20 minutes late, leading to backlogs of transitgoers, which is "a fairly common occurrence," Monich writes in the post.

He also goes on to cite some of the other unmonitored atrocities he's seen on the bus over the course of the pandemic: people spitting or coughing on others, people removing their face masks immediately after boarding, and more.

"I have yet to have a single commute where everyone is wearing a face mask," the post reads.

"This is really challenging for the TTC to monitor, I get that... but it is my opinion that to provide safe service, they must be focused on providing on-time service. To me, this should be fairly easy when the streets are empty at 4:30 a.m."

The TTC told the CBC yesterday that such documentation of what they consider to be rare conditions on some of their vehicles are helpful for determining where to ramp up service, which it plans to do for the busiest routes.