With more and more people choosing to flee Toronto as the health crisis continues, nearby cities and towns are seeing a surge of interest from people who want more space for cheaper now that many downtown offices — along with some of the businesses and amenities that have made T.O. attractive — are shuttered for the foreseeable future.

But though getting into a city once you move out of it may be easy for non-drivers in Europe, it is less so in North America and specifically Ontario, where cities are designed with cars in mind and public transit leaves much to be desired.

Luckily, the province has a ton of transit projects in the works, the latest among them a cohesive train system that would connect GTA cities as far as Hamilton, Kitchener, Oshawa, Niagara and Newmarket.

A 60-page master plan for the Trillium Regional Rail Network was just released by the Toronto Region Board of Trade this month, with the end goal of shifting Southern Ontario's train lines from being centred on the needs of commuters coming into downtown Toronto during rush hour — a dwindling demographic — to being more comprehensive. 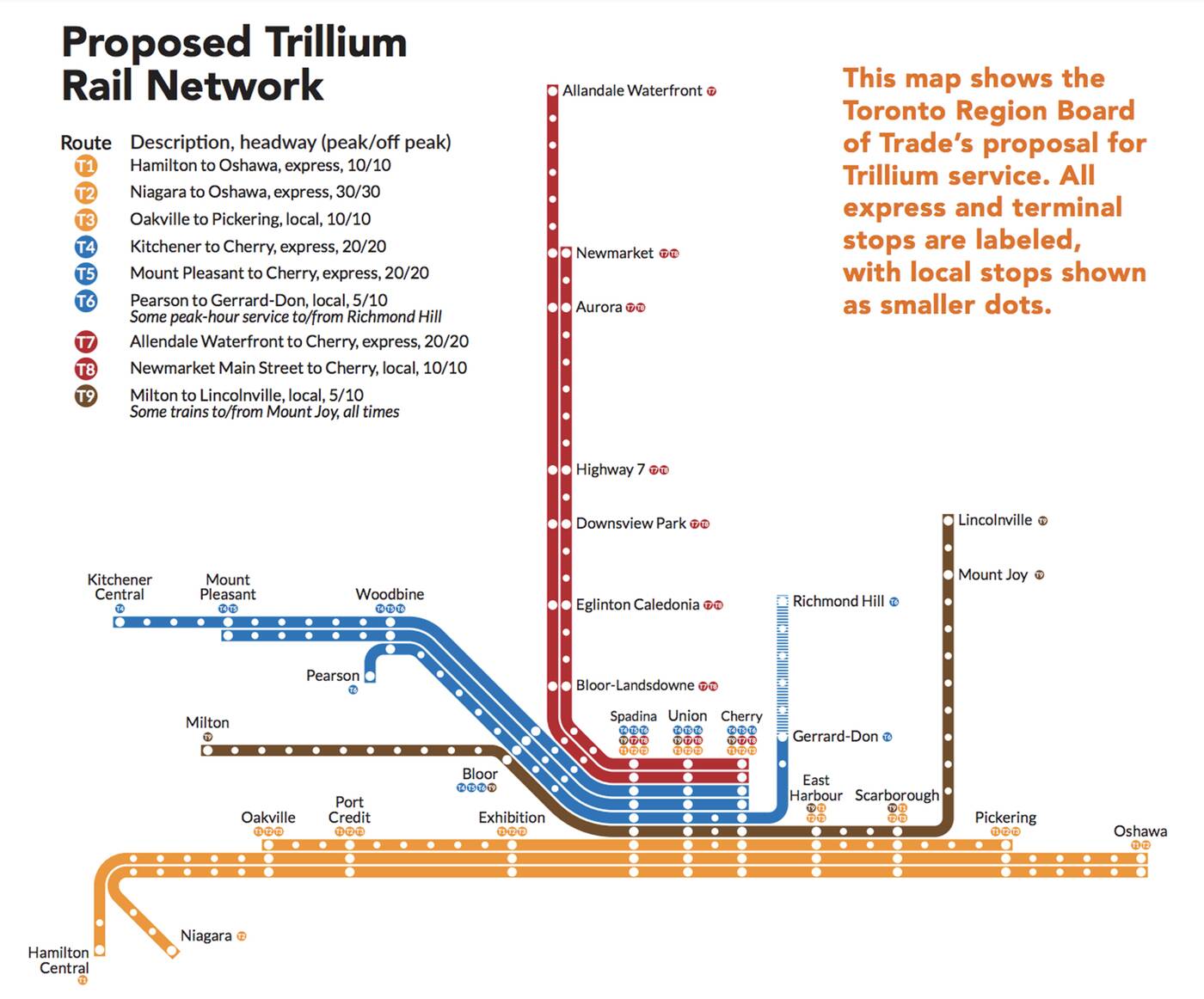 A map of where the network would span, from the Toronto Region Board of Trade and World Trade Centre Toronto.

"At a time when many office workers are considering permanently shifting their work partially or fully to their homes, with as much as 25% of downtown commuters on GO anticipated not to return post-pandemic, the network’s focus on traditional rush hour commuting may limit its recovery," the plan says.

"Now is the opportunity to make the policy decisions necessary to nudge customers away from their vehicles. Transit must, more than ever, become a truly all-day, anywhere-to-anywhere service, planned and designed around the needs of the customer."

The new network would ramp up timetables on both new and existing infrastructure, with easy integration with other local transit like bus and subway lines and a rebrand of the GO network to show "an entirely different level of service from traditional GO Transit."

The goal would be two-way, all-day service at least every 10 minutes on all corridors, as well as express service for longer trip, using international cities with successful transit models, such as Paris and Berlin, as inspiration. 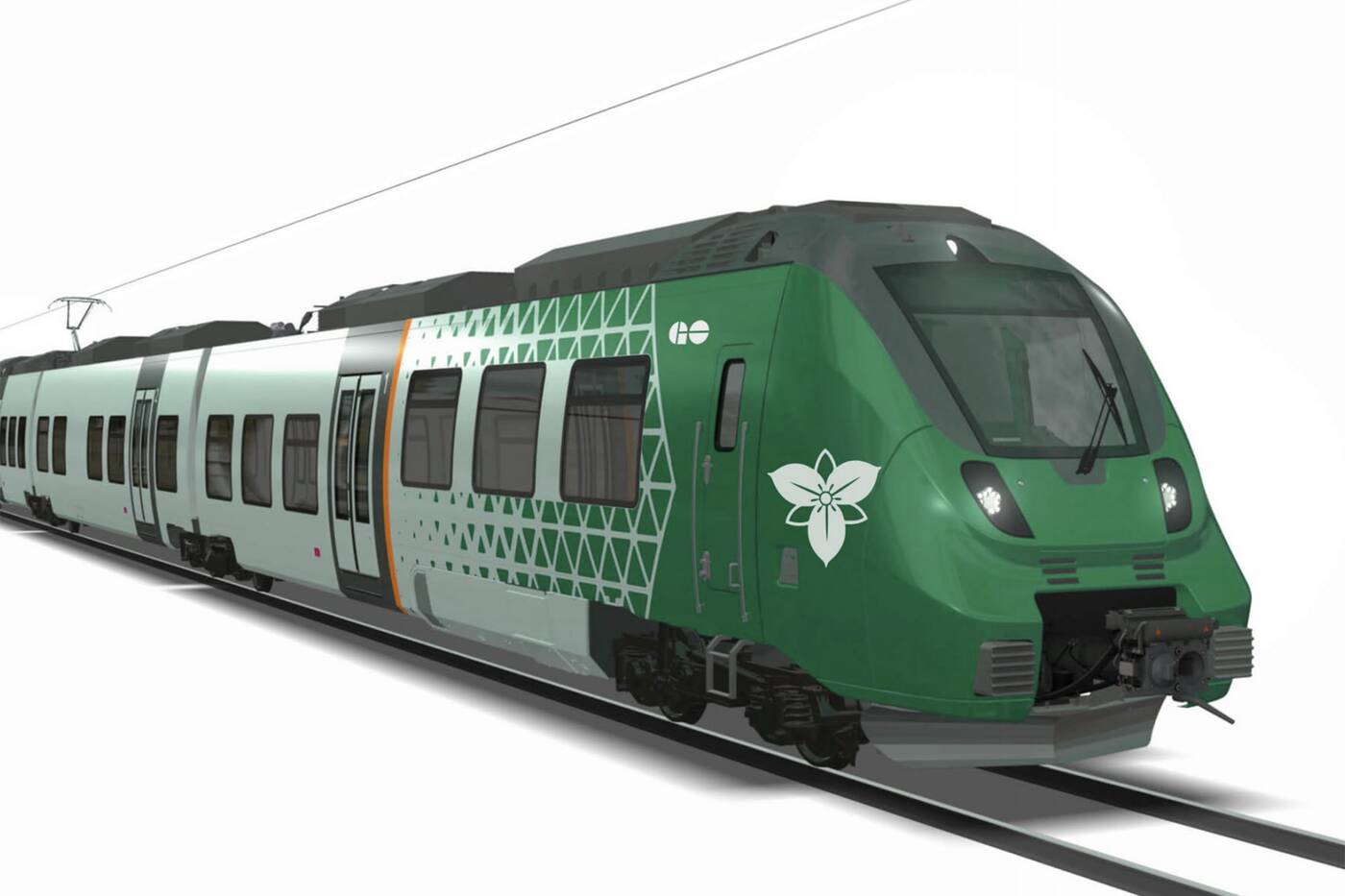 A rendering of a Trillium train from the Toronto Region Board of Trade and World Trade Centre Toronto.

"These high and regular frequencies mean Trillium will act as a large expansion of Toronto’s subway network," the document says.

"Unlike the TTC’s subways, however, Trillium’s high frequency trains will stretch far beyond city limits, essentially creating a subway network for Halton, Peel, York, and Durham regions, as well as Hamilton."

The concept seems ambitious, but its use of lines and other infrastructure we already have makes it less daunting than an all-new underground project like the Ontario Line.

But new vehicles, higher frequency and enhancements of hubs like Union Station still mean that such an endeavour, though possibly sensible, would be an immense amount of work and money.

The desire for it among the public has also yet to be proven, though its benefits for the region — particularly those who are struggling to afford or find a reason to live in the city proper anymore — are easy to champion.