On the afternoon I'm slated to meet Adrian Currie, Westmoreland Parkette is more skating rink than playground. The previous evening's rain froze over the small park's footpath, making its modern seesaws and swings inaccessible to all but the bravest and most unsupervised children.

Still, it's a beautiful day: bright, blue, and temperate for a Toronto winter. The benches and picnic table are dry enough to sit at, even if no one else has elected to. A few curious passers-through stop long enough to percuss a couple of notes on the park's metal instruments, overlapping the muffled din of midday Bloor Street traffic.

Adrian calls out to me when he arrives. It takes him about a minute to get to the table, stepping deliberately as he slowly walks his bicycle over the uneven ice. As he sits, he's digging in the pockets of his bomber and saddlebag for his face mask; the one he eventually discovers and dons bears the stylized sunflower of the Green Party of Canada.

Currie is the Vice President of the Board of Directors of Cycle Toronto, the city's largest not-for-profit cycling advocacy organization. Since its formation in 2008, Cycle Toronto has worked tirelessly (wheels excepting) to promote the use of bicycles in the city via data collection, community outreach, and a strong relationship with City Hall.

Cycle Toronto's work influences where new bike lanes are built in the city; The organization's recent victories include the now-permanent route on Bloor and the massive expansion of infrastructure during last year's ActiveTO initiative.

In less tumultuous times, they run bike valet services at festivals like Word on the Street and Field Trip; every autumn, the Get Lit! program gives away hundreds of pairs of lights to bikers riding without. 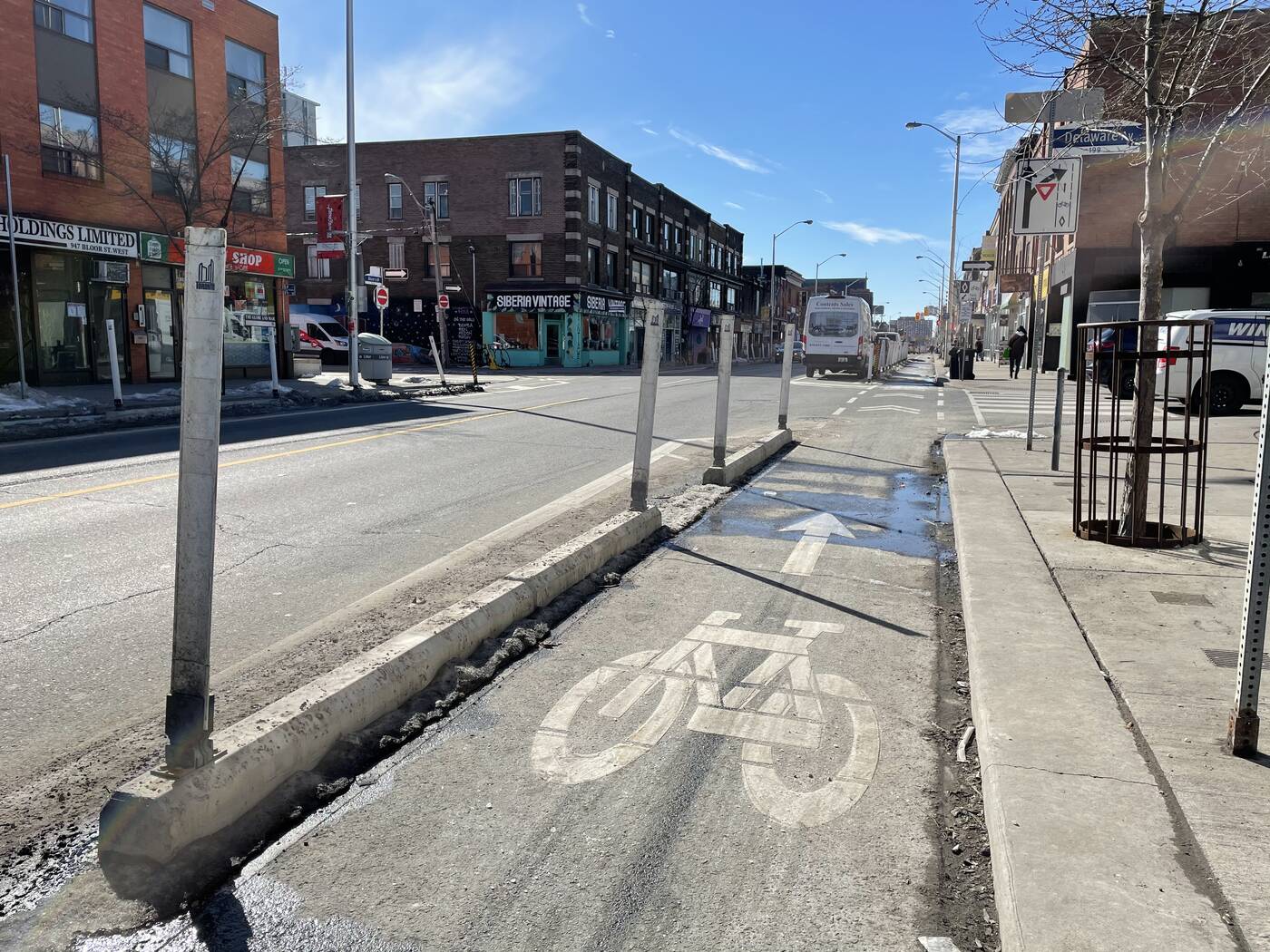 Made permanent in 2017, the Bloor bikeway was extended past Shaw to Runnymede in 2020.

'I've dedicated my life to building it up'

Born in Jamaica, Adrian's family moved to Malvern when he was six, in the 1970s. "At the time, it was a cornfield and apple orchards. I grew up in the Rouge Valley, which was then literally the countryside," he says.

After graduating from Jarvis Collegiate, he pursued post-secondary studies at the University of Ottawa before transferring to McGill, where he earned dual bachelors in Economics and History.

"After high school, I moved east for eleven years. Ottawa for two, then Montreal for nine. In that nine I also lived in New York, and travelled all across the United States. When I moved back to Toronto, it blew my mind. It had grown up. It had transformed into a world-class city.

"After only eleven years, it just impressed the hell out of me. I fell in love with Toronto again. That's when I said, 'I love this city. I'm not going anywhere.' So, I've dedicated my life to building it up and making it a sustainable, vibrant city, home to millions of people who love and cherish it."

Upon returning to Toronto in the early 2000s, Adrian began volunteering with the Community Bicycle Network, serving as a board member and chair until the organization’s dissolution in 2017.

"The Advocacy Committee decides which projects Cycle Toronto should take on and how to go about taking them on. We organize petitions, action alerts, rides, whatever we have to do to work with the school boards, the residency associations, and the community groups," he says. 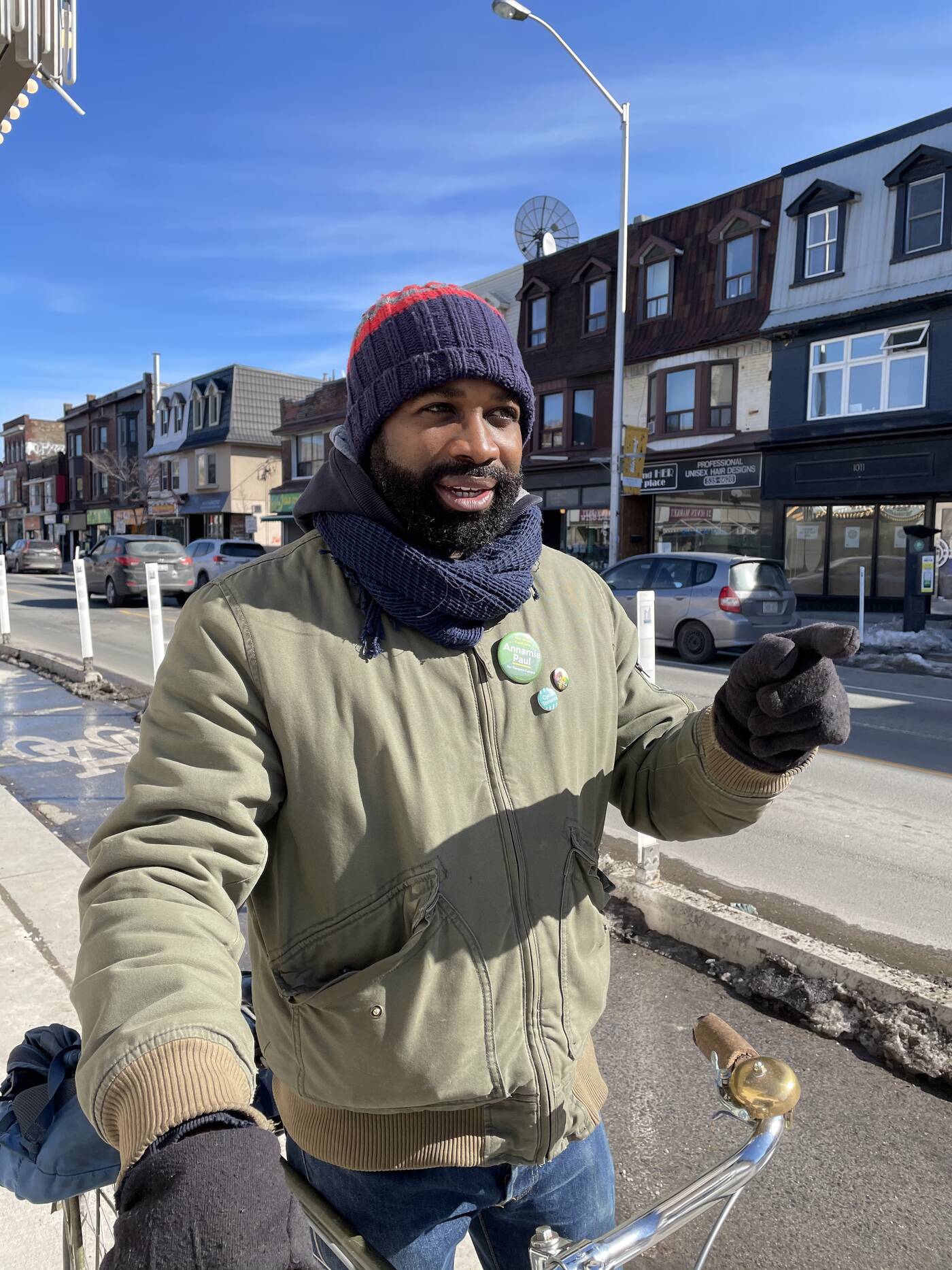 Currie rides his bike year-round. He says it's easier than ever with well-maintained bike lanes on major arterial roads.

"We’ve formed great relationships, including with city councilors, because they're the ones who control the city's purse strings and make the decisions," he tells me.

"Councilors like Mike Layton, Joe Cressy, Kristyn Wong-Tam, Brad Bradford — they get it. They realize that active transportation is important. They see the value of bike lanes, not just for the cyclists in the downtown core, but for every citizen.

"That's why we want to connect the grid in downtown Toronto with Scarborough, North York, and Etobicoke, because people who live in the suburbs also ride bikes.

"The streets are wide out there; there's plenty of room for protected bike lanes. If you put the infrastructure in place, people use it. So now, we're building relationships and finding partner organizations in those parts of town to give the citizens what they want."

'Climate change is a real threat'

He goes on: "We can't be dependent on cars and gasoline, because, lo and behold, climate change is a real threat. Not just that: congestion. If you travel through some parts of Europe — Italy, Spain, France, the U.K. — there are cars everywhere. Their roads are choked, there's no room for them.

"Do we want that to happen in Toronto? No. We're a very young city. There's a lot to take from the pitfalls that other cities have faced. In Jamaica, there's a saying: 'you live, you learn.' We see what's happened, and we try to do differently."

He adds that the evidence for bike lanes is mounting.

"New York City has put in massive amounts of lanes. Montreal, Copenhagen, Portland, Bogota, these are cities that are ahead of the curve. We share what we've learned from studying other cities with the people who make the decisions in ours.

"The key is not to ... blame them or shame them, but rather, to try to convince them of what works, of what's better for a society and its citizens." 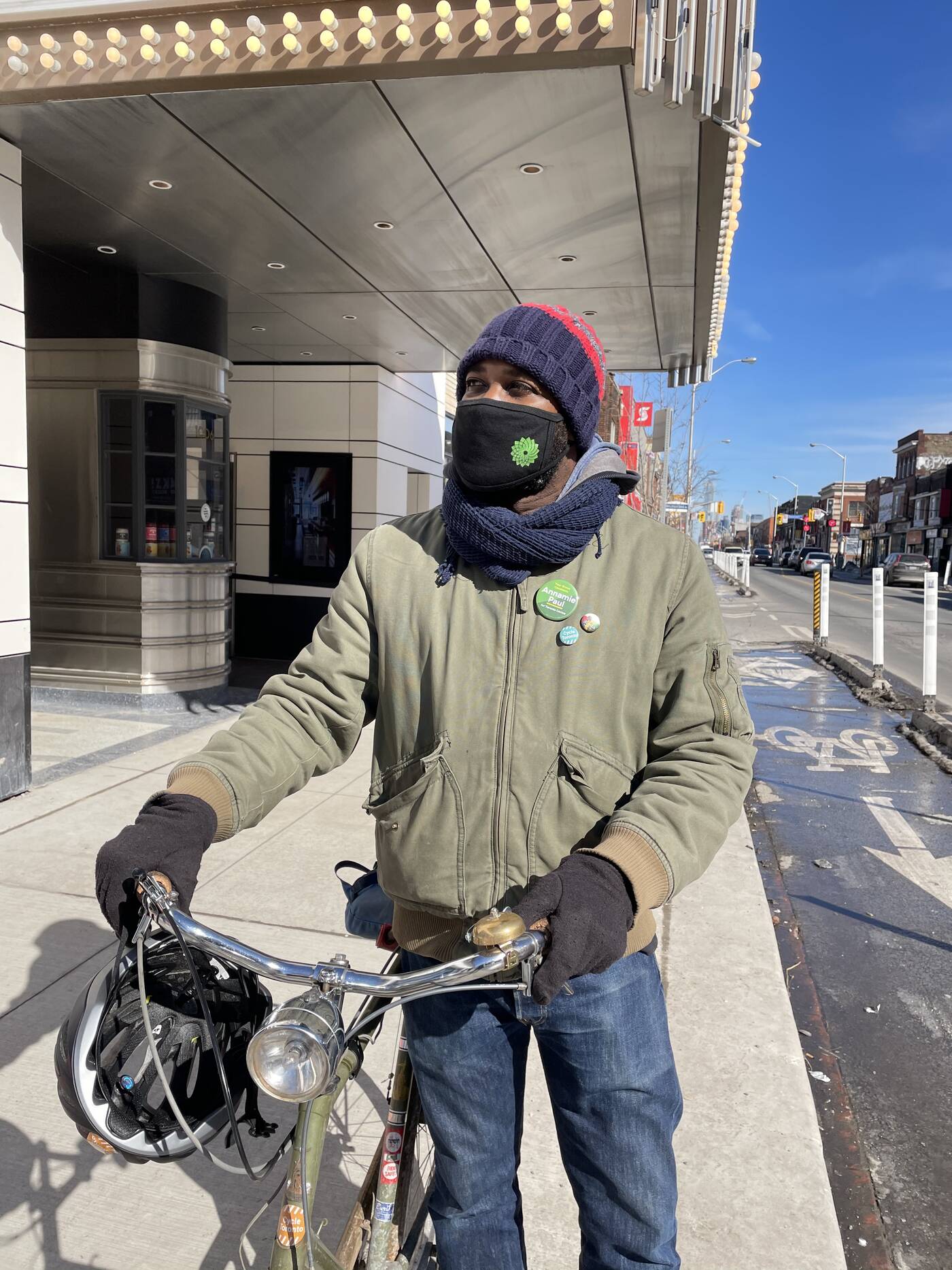 Currie wears his affiliations with pride.

The installation of bike lanes on Bloor had a positive economic impact on the neighbourhoods they span. The number of cyclists using Bloor increased by 56%, with 25% of that number being new riders. At the same time, car traffic on the street decreased by 16 to 18%.

Bring diversity to the Green Party

In addition to his work with Cycle Toronto, Currie sits on the Federal Council of the Green Party of Canada, the party's primary decision-making body, as the Ontario representative.

"I truly feel that the Green Party is the party of the moment. We're not one-issue; we care about the environment, but we also care about social justice issues. My work on the Federal Council is trying to modernize and bring the party up to speed. It's a young party, there's plenty of room to grow."

He tells me that the planet is "literally burning six months out of the year. Icebergs are melting in Antarctica. When they melt, they will not freeze again. Water levels are rising, even here in Toronto down by the harbour."

He adds: "The party is becoming more diverse. As of the 2019 election, we were the least diverse party of all of the major parties, even less so than Maxime Bernier's People's Party.

"I am the first black man elected to the Federal Council. Our new leader, Annamie Paul, is the first black woman and first Jewish woman to lead a major political party in Canada. The interim President of the party, Liana Cusmano, is a young, non-binary person from Montreal.

"We want the Green Party to reflect the diversity of Canada. We've heard it said many times that diversity is one of Canada's strengths. We want to bring in a younger cohort, because the youth understand that the planet is going to hell in a handbasket." 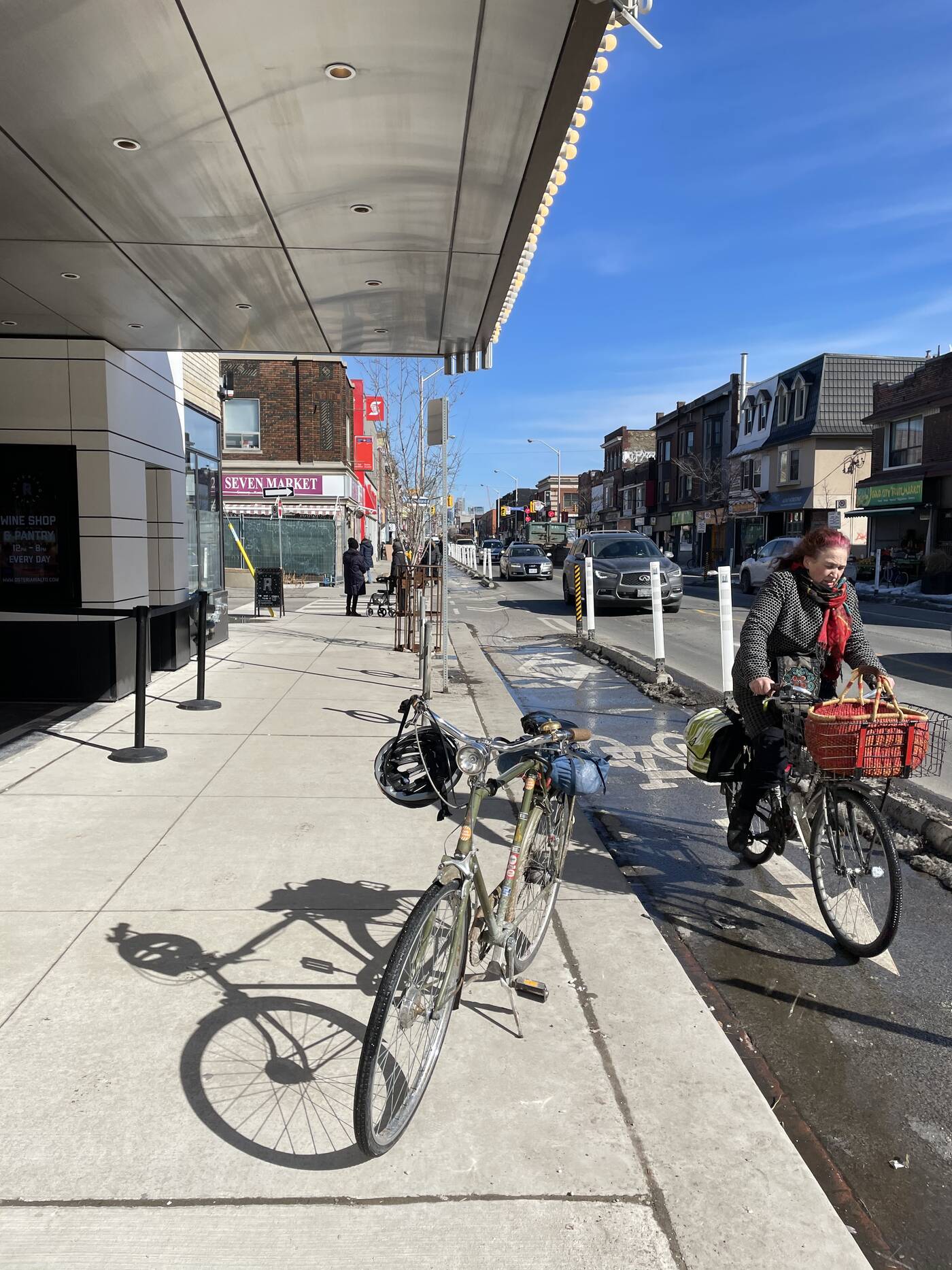 Used by over 3,000 people a day, data from the Bloor Street bike lane pilot project was instrumental in the creation of other bike lanes throughout the city.

'There's just a million things about here that I love'

Though the approval and creation process of new bike lanes was drastically accelerated, in-person events throughout 2020 were canceled or moved online, including Bike Month and the Annual General Meeting where the new Cycle Toronto Board of Directors is chosen.

The Green Party leadership race won by Paul was campaigned for and conducted entirely online. Currie has not yet met a few of his new colleagues in person.

When he's not occupied with his work with either of the aforementioned organizations, Currie is an actor and director. (I notice that the jacket he's wearing on the day we meet is memorabilia from his documentary iRasta.) He currently resides in the Junction Triangle, behind the West Toronto Railpath.

"I love my neighbourhood. It's like living in Brooklyn. There's a bunch of places on Dupont that I love. Farmhouse Tavern, Rancho Relaxo, Wallace Espresso, and TuckShop on the corner.

"Carlton Park is behind my house, a beautiful little parkette with a fire pit. It's a great place to hang out with a Mattachioni pizza. One of my neighbours got a permit from the city to make an ice rink back there. I taught my friend's four-year-old son how to skate on it. He picked it up within an hour."

He adds: "I love Toronto. It's clean, it's organized, people are friendly and respect each other. Have you ever seen how beautiful the city looks from the island?

"I love the World Cup in Toronto. Going from neighbourhood to neighbourhood, depending on who's playing, to be at all of the block parties. There's just a million things about here that I love." 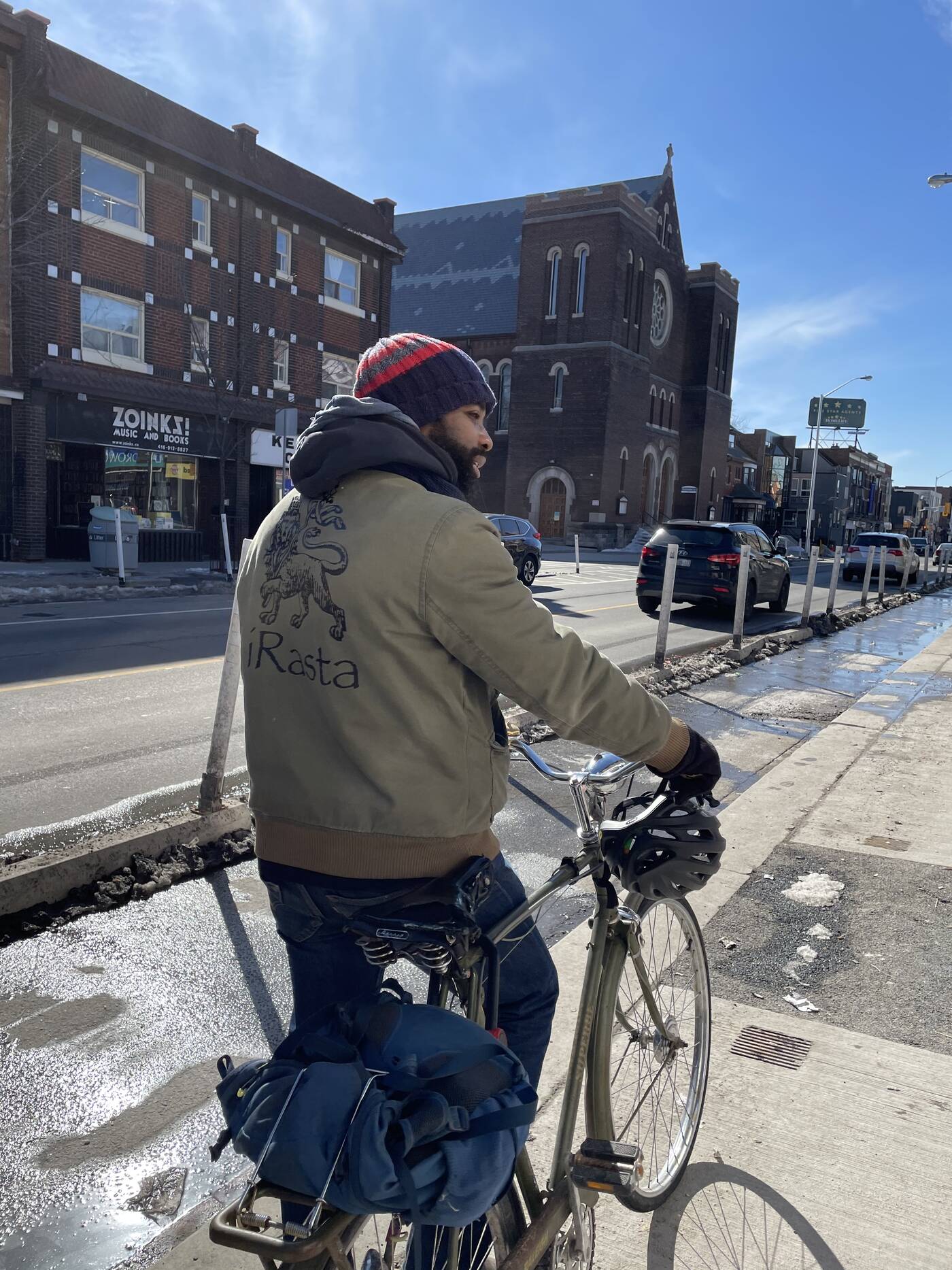 The Lion of Judah features prominently on the back of Currie's jacket.

As we gingerly step away from the icy Westmoreland Parkette, I look at Adrian's bike. It's a vintage steel-frame Raleigh Superbe in Bronze Green, over half a century old, but well cared for.

This is his summer bicycle; his winter ride was stolen a few months back, despite dual locks and a tall fence. He seems comfortable and in his element as he adjusts the Raleigh's saddle. I ask if he's got any tips for people unaccustomed to biking in the city's winter.

"Bundle up and layer," he says. "Get a nice toque or hoodie to cover your head. Get thick gloves and water-resistant footwear. Wear wool socks and long johns."

His smile is broad as he removes his face mask, ready to pedal away. "If you're new to Canada, invest in a pair of long underwear. It will change your experience of this country."