More than 170 years after it was first established along Toronto's waterfront, The Esplanade is finally set to get proper bike lanes — that is, if everything currently proposed for the area is approved as planned.

The City of Toronto recently announced its intentions to spiffy up both The Esplanade and Mill Street with bi-directional cycle tracks that would allow people to ride in both directions on one side of the road. Further details were released last night during a virtual public meeting.

Running along the south side of the strip from Yonge Street all the way to Bayview Avenue, the protected bike lanes would connect to existing bikeways on Bayview, Cherry Street, Lower Sherbourne Street and Yonge.

The goal is to "encourage people cycling to use the cycling facilities on the road instead of the promenade," boosting safety for pedestrians, cyclists and drivers alike in the bustling area.

David Crombie Park, considered the "green spine" of the St. Lawrence neighbourhood and running just north of the subject site, would also be fully revitalized to include a "continuous accessible path through the park blocks, meant for walking and other uses at walking speed." 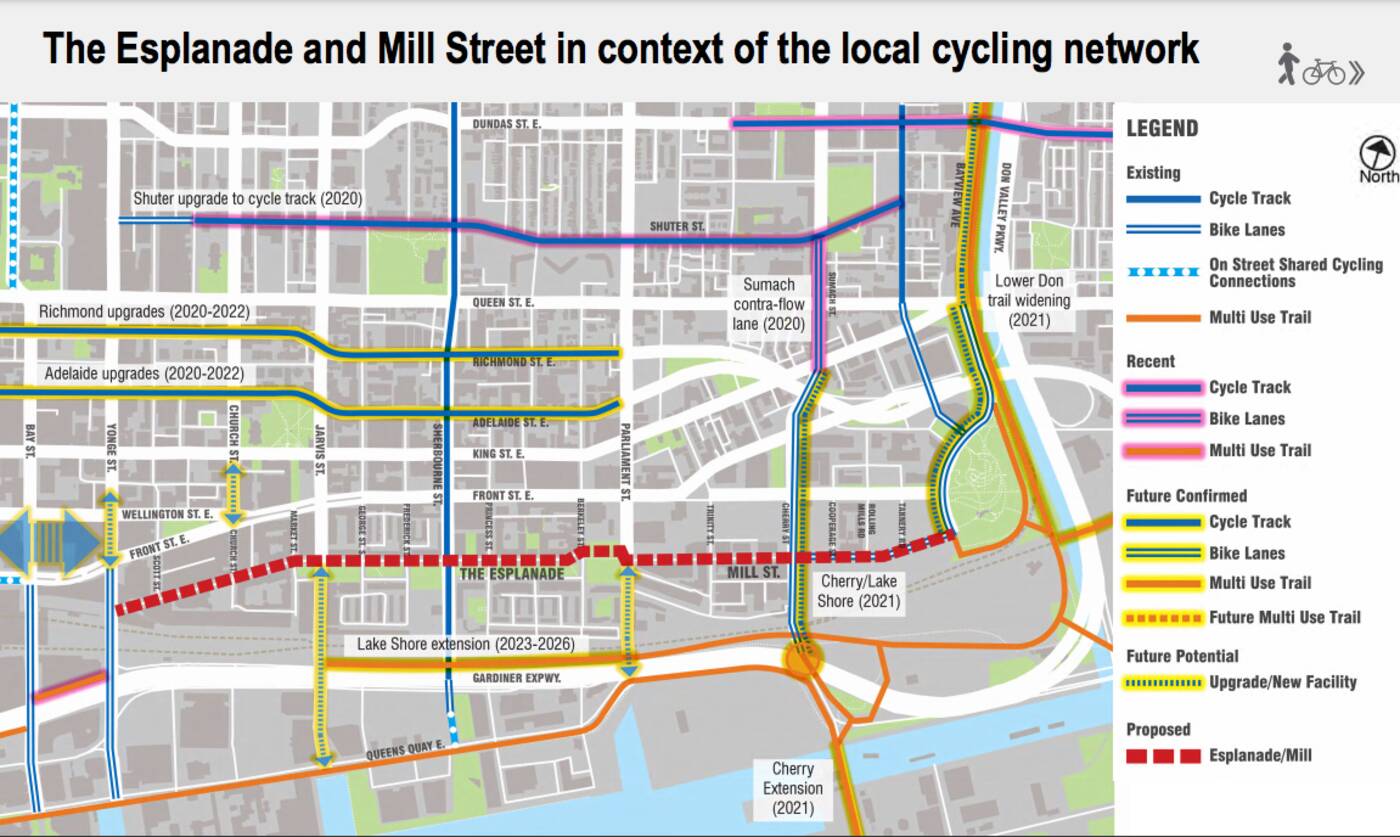 The goal is to create a new east-west bike path through one of Toronto's oldest neighbourhoods while improving the public realm around it. Image via City of Toronto.

"Today, walking, cycling and transit make up nearly three-quarters of the trips in the St. Lawrence and Distillery District neighbourhood, yet there have been more than 340 collisions on this corridor in the last five years, 10 per cent involving people walking or cycling, and one per cent leading to serious injury or death," reads an explainer of the project on the city's website.

"The Esplanade is also being used as a bypass to Front Street and Lower Jarvis Street. This non-local traffic leads to congestion, pollution and noise, and delays to TTC service."

As appreciated as the bike lanes would surely be, they're only one part of a larger, multi-phased glow-up that would impact The Esplanade, Mill Street, Parliament Square Park, David Crombie Park and the First Parliament site (famous for once holding government buildings that were burned down by the Americans in the war of 1812.)

The city is also proposing a series of driving, parking and transit changes to prioritize local access and reduce cut-through traffic, while still accommodating curbside activity throughout most of the stretch.

"Some blocks on The Esplanade would be dedicated for transit only. Some blocks on both streets would be converted to one-way streets to accommodate the bikeway and transit operations within a narrowed street," notes the proposal.

Mill Street, for instance, would be converted to one-way westbound between Cherry Street and Parliament Street, and between Bayview Avenue and Tannery Road.

On The Esplanade, speed limits would be reduced from 40 km/h to 30 km/h and traffic would run one-way (westbound) from Church Street to Scott Street, from Jarvis Street to Market Street, and from Princess Street to Berkeley Street.

You can check out all of the proposed changes and provide feedback via the City of Toronto's website or watch a full, 24-minute-long project video here. 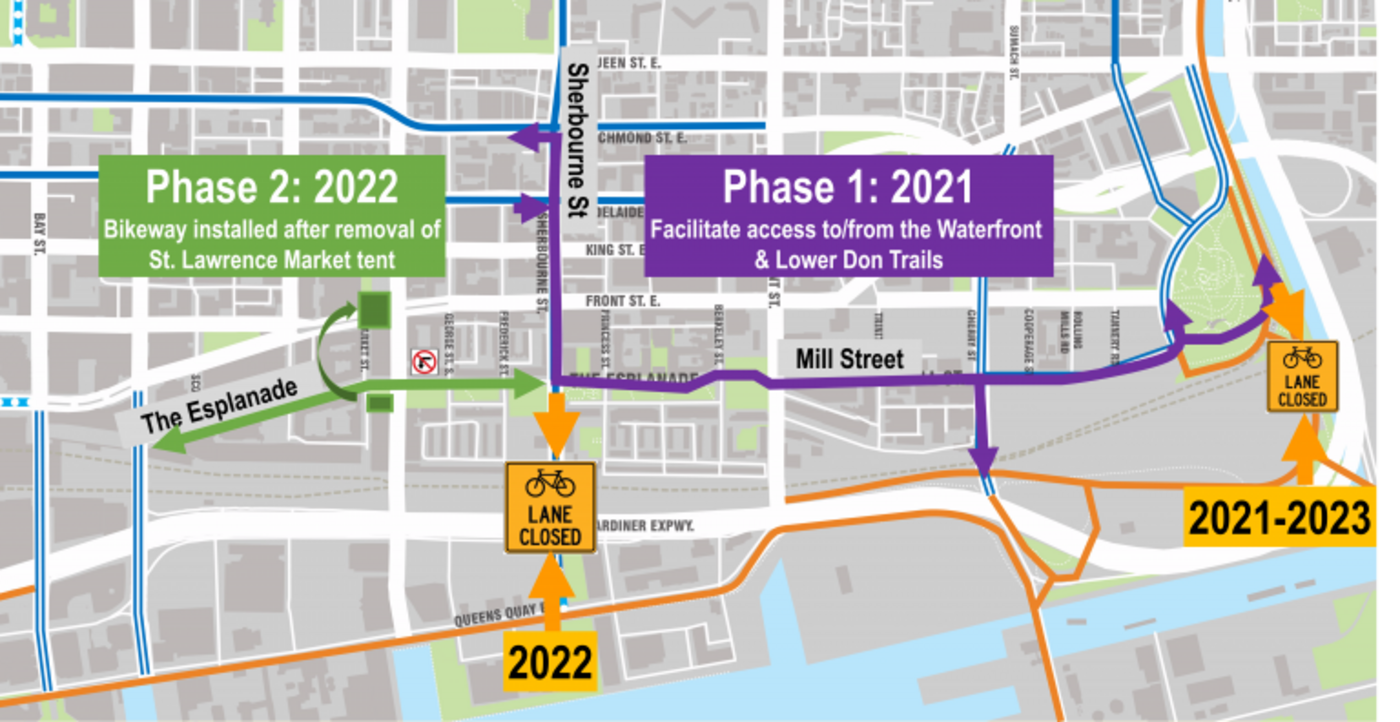 Work on the project would start along Mill Street in 2021, followed by The Esplanade east of Sherbourne when the St. Lawrence Market tent is taken down. Image via City of Toronto.

In terms of timing, the work (if approved) would take place in two distinct phases.

The first, set to begin sometime in 2021, would see the new bikeway and associated changes installed along The Esplanade and Mill Street between Lower Sherbourne Street and Bayview Avenue.

"This would provide a physically separated, east-west cycling route for people cycling between the Downtown and Waterfront neighbourhoods," reads the proposal.

"This connection is proposed to be permanent, but is timed, in part, to act as a cycling route in lieu of the closure of the Lower Sherbourne Street bikeway underpass starting in 2022 (due to planned Metrolinx work), and the Lower Don Trail closure from 2022 to 2023 (due to planned Waterfront Toronto work)."

The bikeway would be extended west from Lower Sherbourne Street to Yonge Street in 2022, with construction beginning as soon temporary St. Lawrence Market tent is removed and the weekly farmers' market moves to the new North Market building.