The history of the Fashion District in Toronto

The Fashion District, formerly known as the Garment District, was once a hub of Toronto's textile and fabric factories.

As years went by the neighbourhood evolved but you can still find a number of specialty stores for fashion-designing needs. 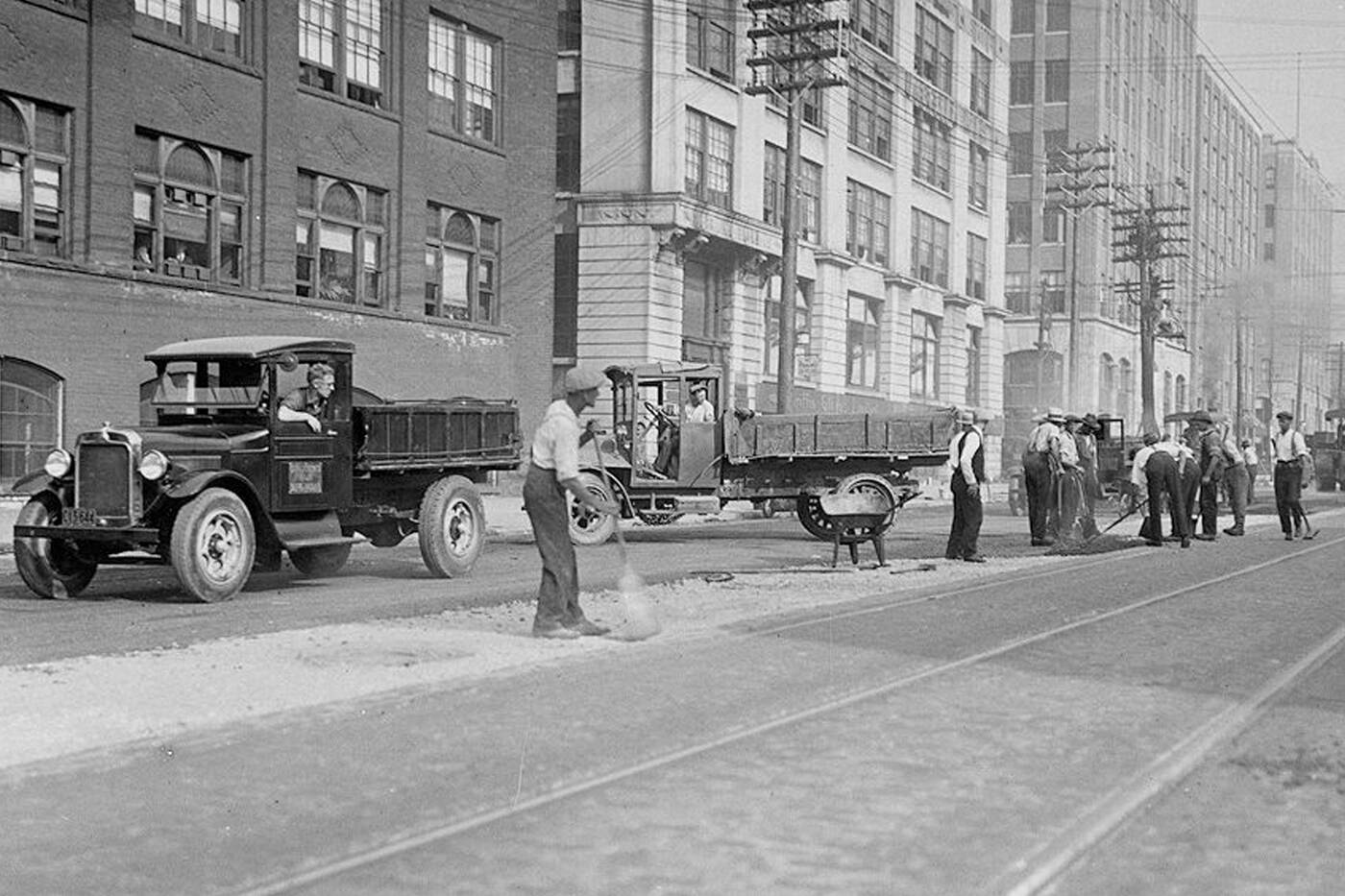 Work being done on Spadina Avenue from King Street to Adelaide Street in 1928.

The Fashion District is bounded by Queen and King streets, as well as Bathurst Street and Spadina Avenue. However, Google Maps extends these boundaries to Peter Street and Front Street West.

In the early 1900s, the neighborhood looked very different from the hustling streets it's known for today. It was mainly a residential area until warehouses and factories began opening up. 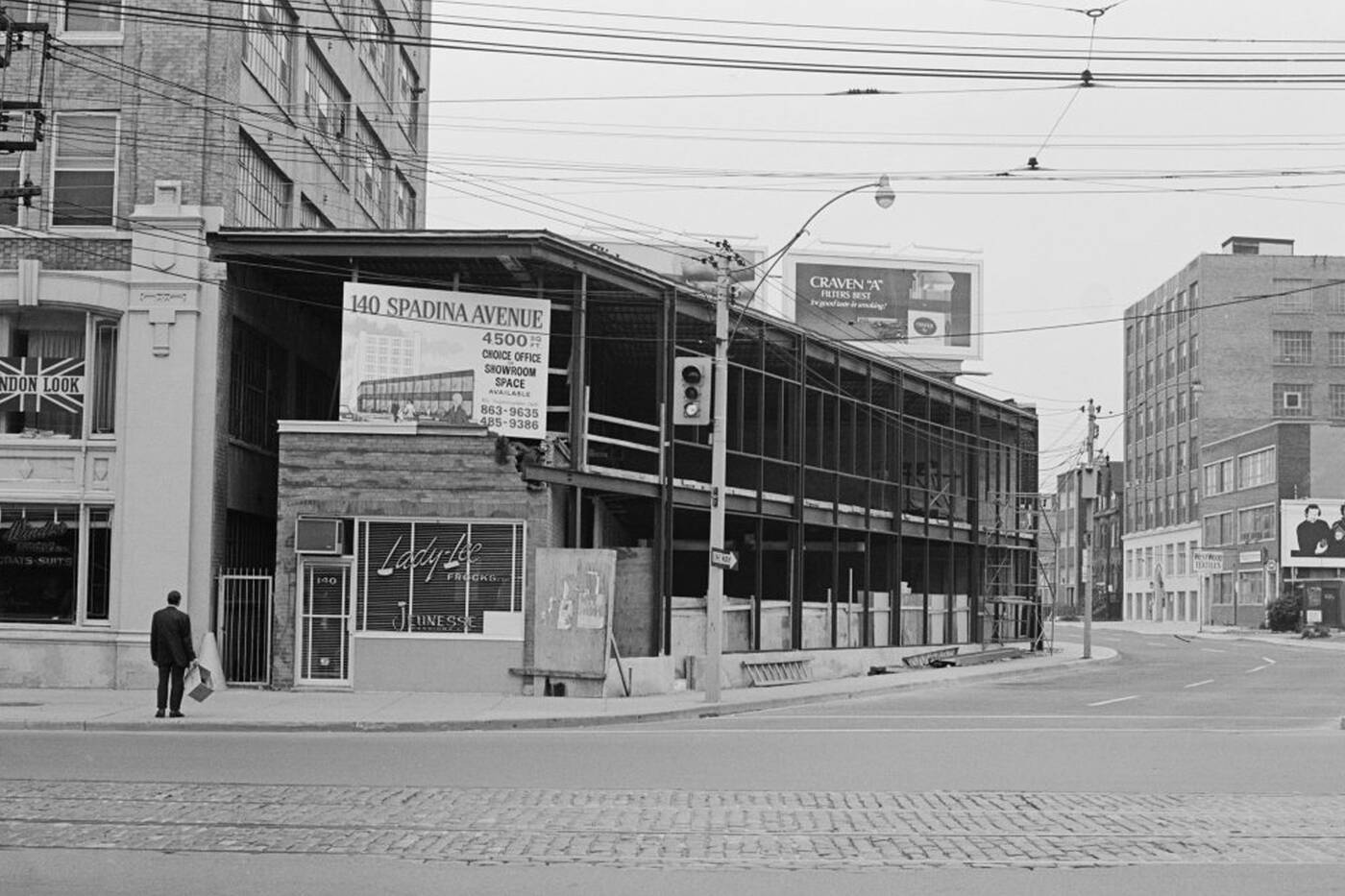 Richmond Street and Spadina Avenue in 1972.

It was home to a large Jewish Community

The factories came for multiple reasons, including the nearby railways which connected the city and fueled its development as a commercial area.

Prior to being a fashion district, the neighbourhood had a very large Jewish population. According to this city document, 80 per cent of the city's population lived here.

Consequentially, Jewish businesses, synagogues and delis were found throughout the neighbourhood. It was also members of this community who worked in the garment industry, informally known as the "rag trade." 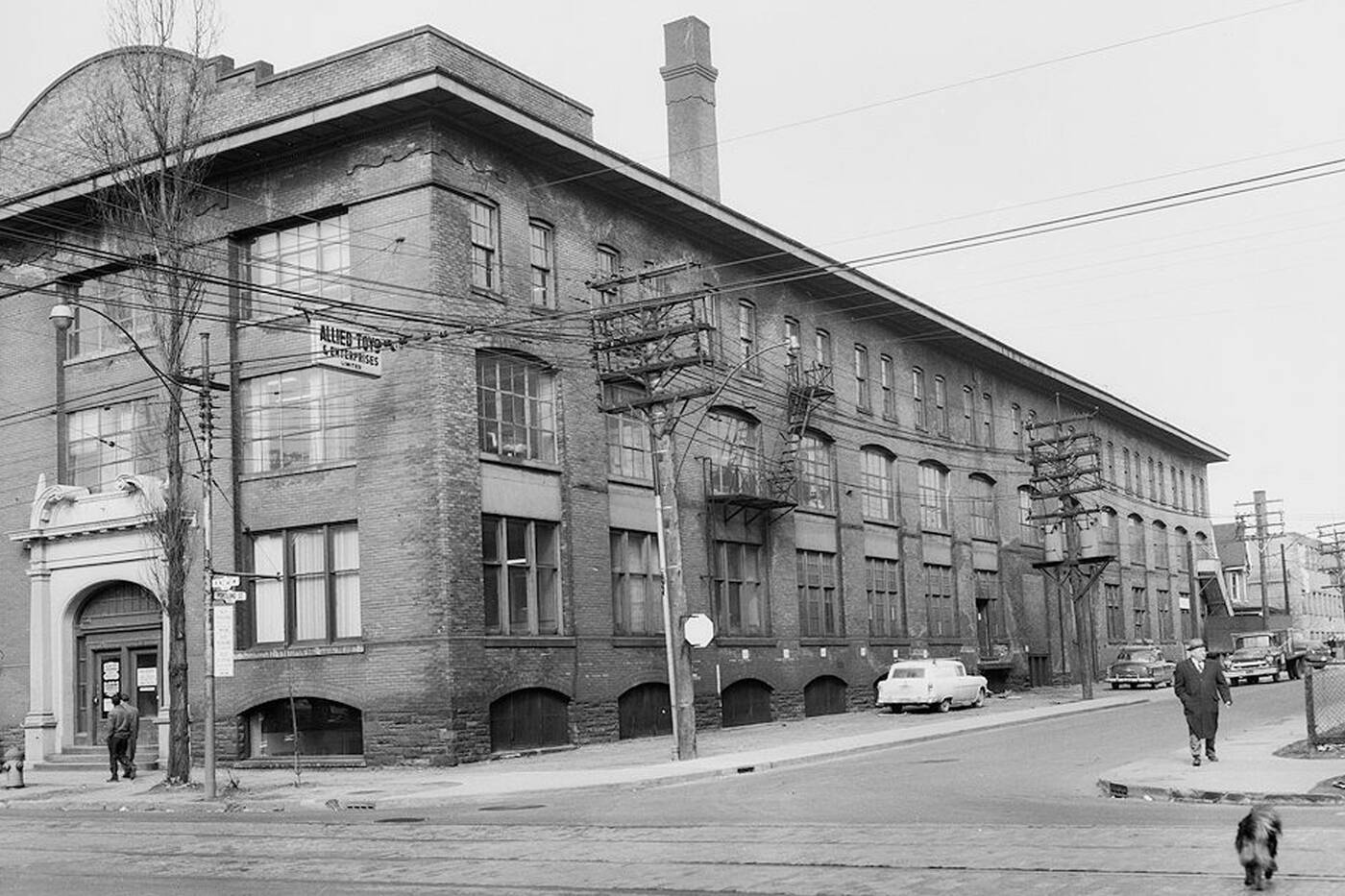 King and Portland streets in the 1950s.

The community took advantage of being situated nearby warehouses, along with a growing demand for garments, and thrived in Toronto's fashion and textile industry.

The area became so well known for its factories, that it gained the name Garment District.

Toronto architect Benjamin Brown designed many of these buildings for the Garment District. He was also one of the first Jewish architects in Toronto. 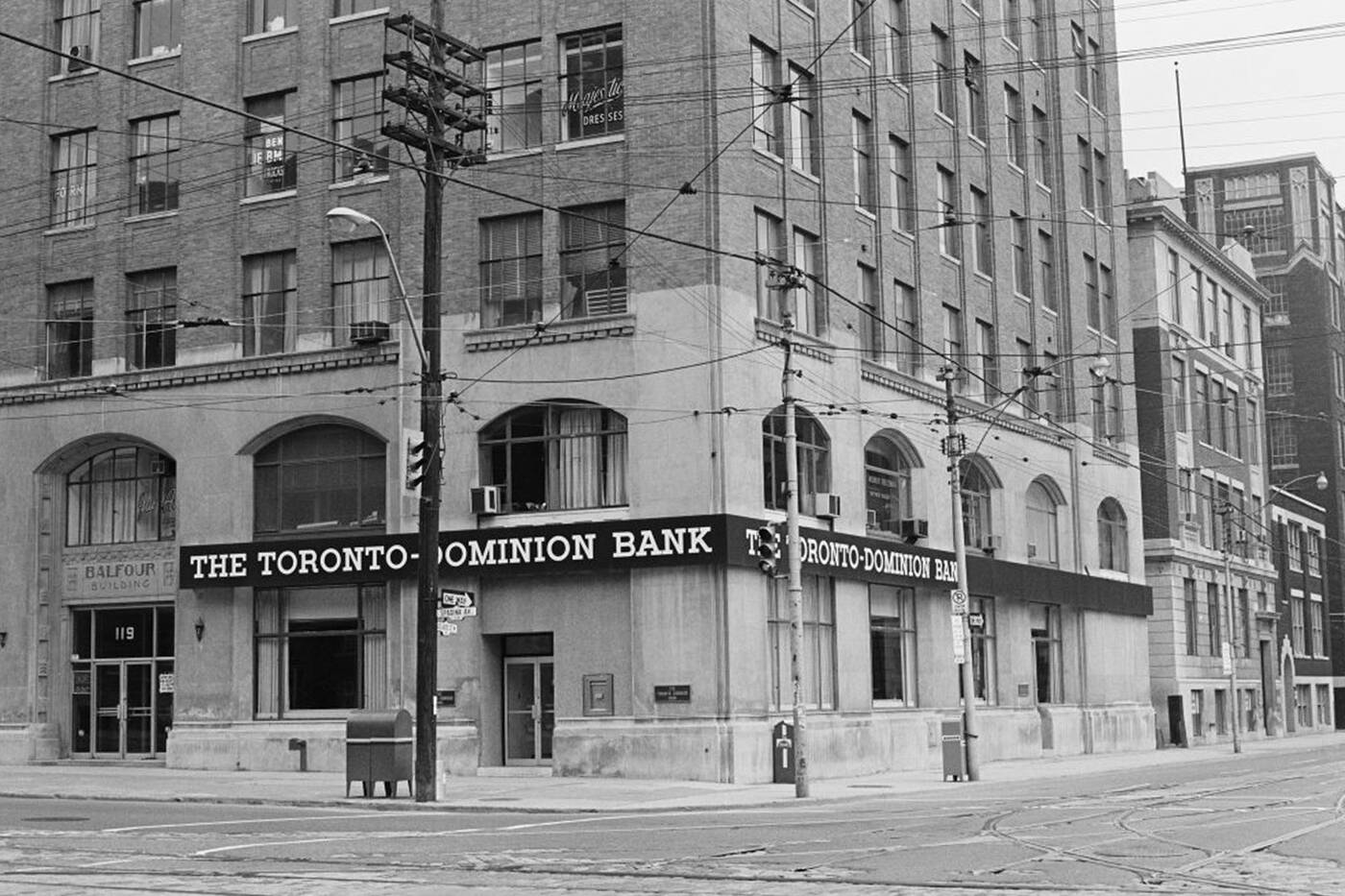 Brown was hired to create buildings to serve the textile industry while remaining architecturally appealing. Many of his buildings still stand to this day, including The Tower and The Balfour buildings.

According to the Ontario Jewish Archives, they "stand opposite one another on Spadina Avenue at Adelaide Street West, framing the street and forming an urban gateway to the heart of the garment district."

Post Second World War the area was subject to a lot of change. Jewish families began moving to the suburbs, replaced by many Chinese residents who were displaced by the construction of Nathan Philips Square. 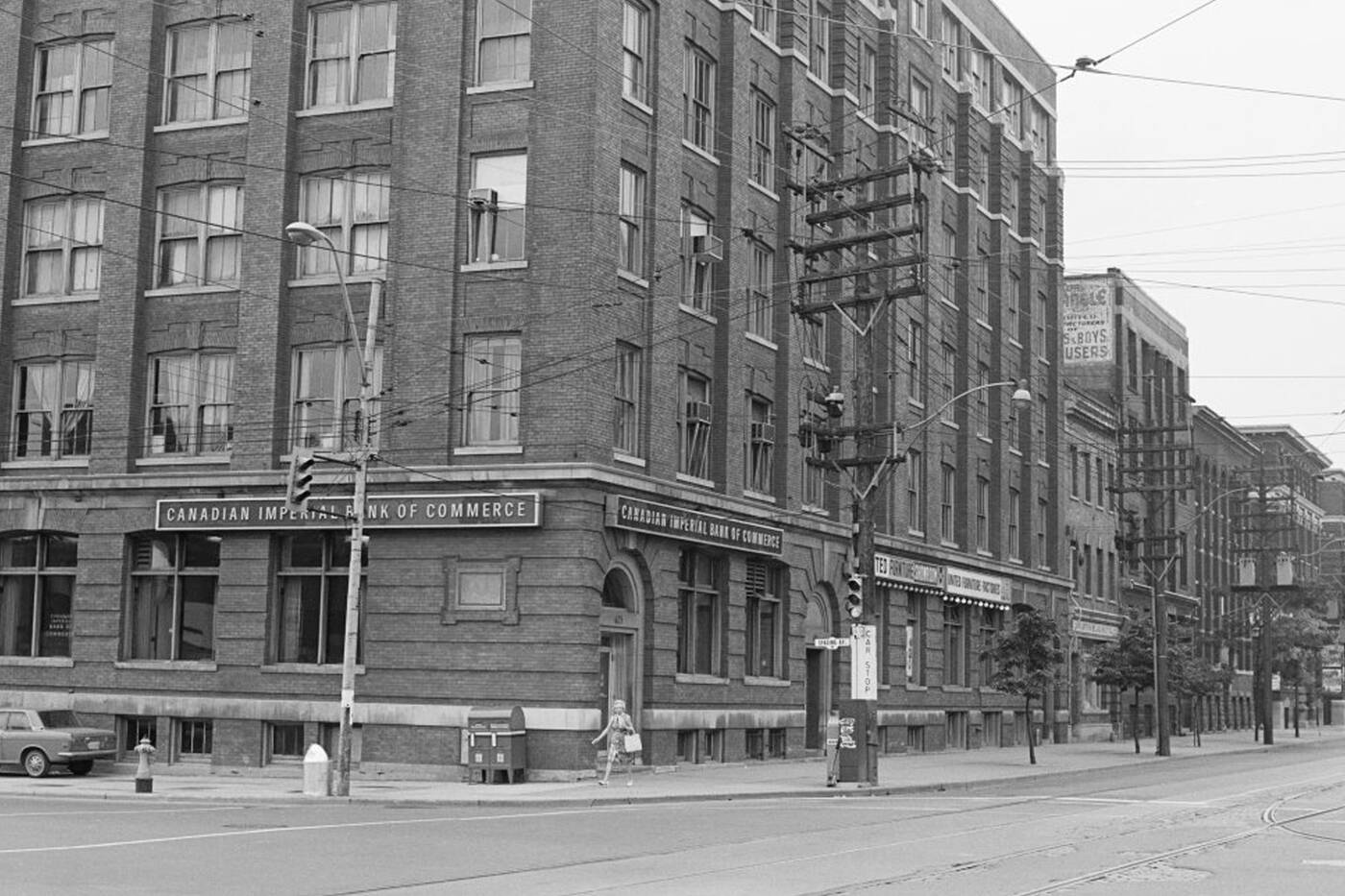 The Canadian Imperial Bank of Commerce on the corner of Kings Street and Spadina Avenue in 1972.

This is also why the Fashion District is in such close proximity to today's Chinatown. After this demographic change, many of the textile factories began shutting down and converting to other uses. 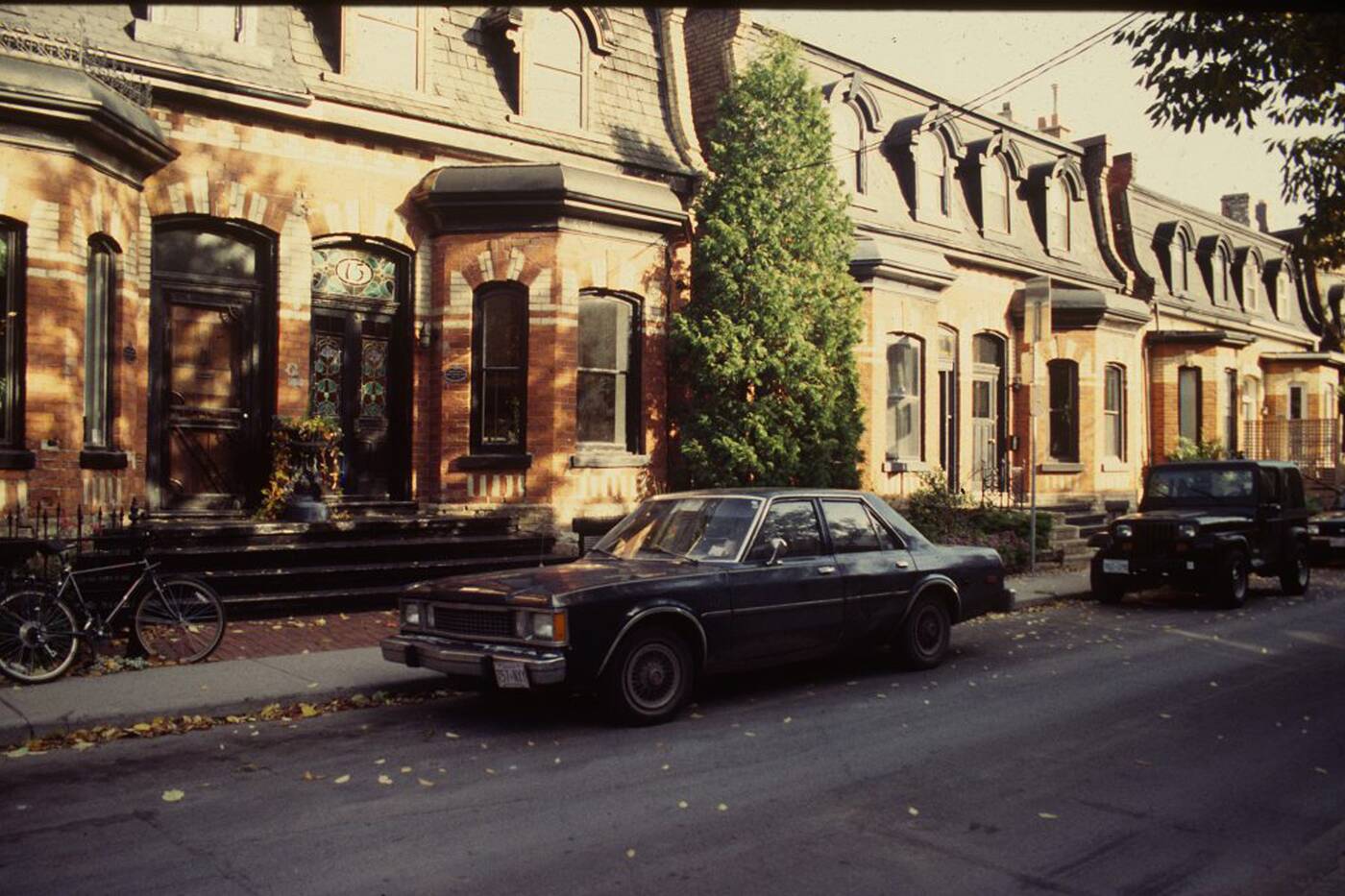 A residential area on Draper Street in 1988.

These huge warehouses were being moved to cheaper, more convenient locations near highways, outside of the city. As a result, downtown Toronto became more friendly for smaller businesses and companies.

It was in the late 1980s and 90s that the City of Toronto began investing in former industrial areas, like the Fashion District. 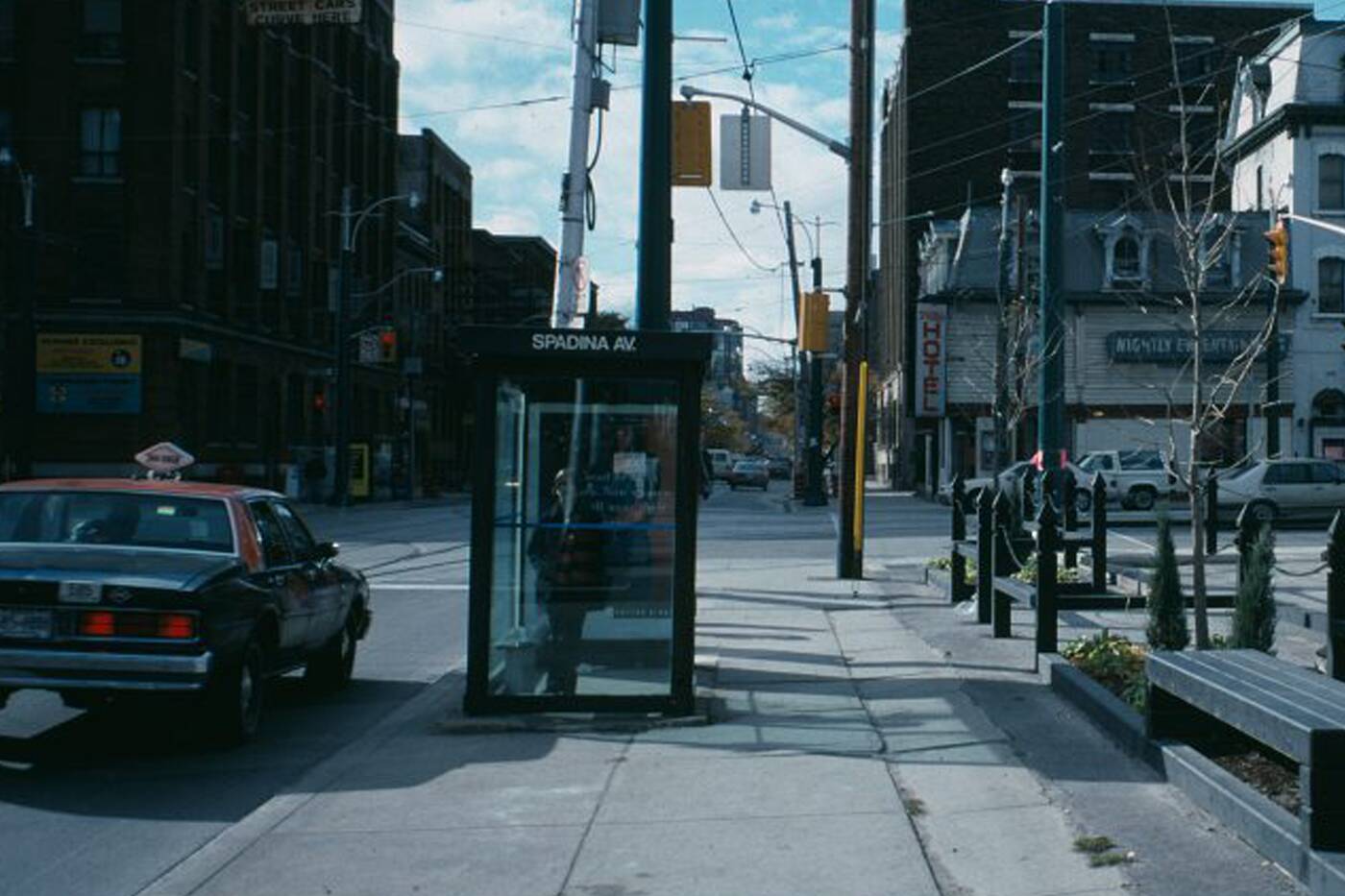 The intersection of King Street and Spadina Avenue in the 1990s.

According to the Garment District Neighbourhood Association, "In 1996 a zoning change resulted in the elimination of traditional land-use restrictions and re-designation of these districts as 'regeneration areas' to encourage re-investment, create housing opportunities and offer creative spaces for new businesses."

It's now known for its night-life

Thanks to these initiatives, the neighbourhood is now known for its live/work buildings, retail stores and bustling night-life. 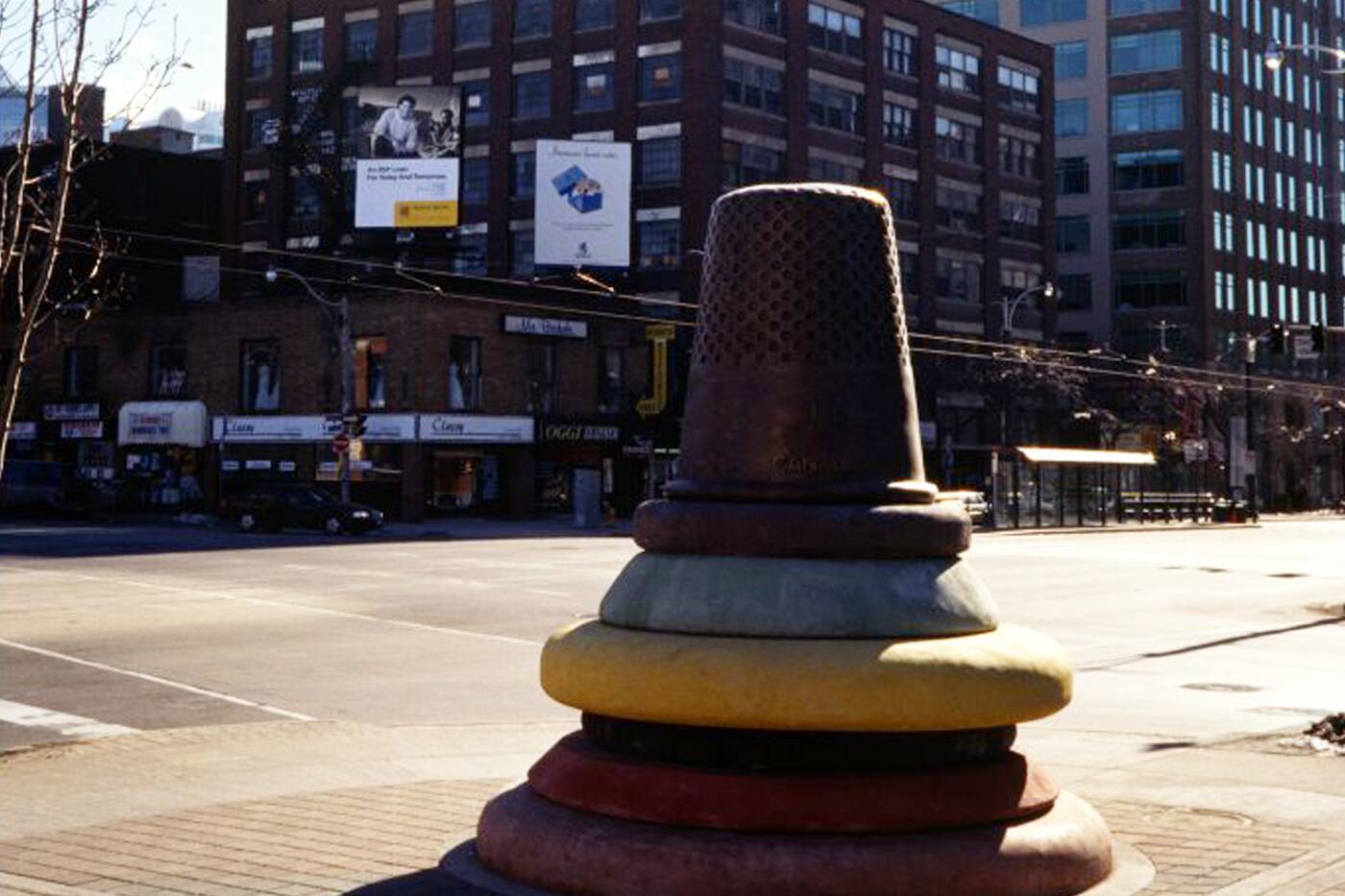 A sculpture of buttons and a thimble located on Richmond Street and Spadina Avenue to commemorate the neighbourhood's history.

Many bars and restaurants are now found in the area, and in pre-COVID times would be filled with young Toronto professionals after a long day of work.

Staying true to its history, the Fashion District is still home to numerous textile, bead and clothing stores. These small businesses attract artists and craftspeople, and play an important role in keeping the Garment District's legacy alive.