This is what Chinatown used to look like in Toronto

The first Chinese settlers in Toronto opened laundries in the 1870s, an occupation that was dominant over the next few decades before the number of Chinese immigrants grew in the city. 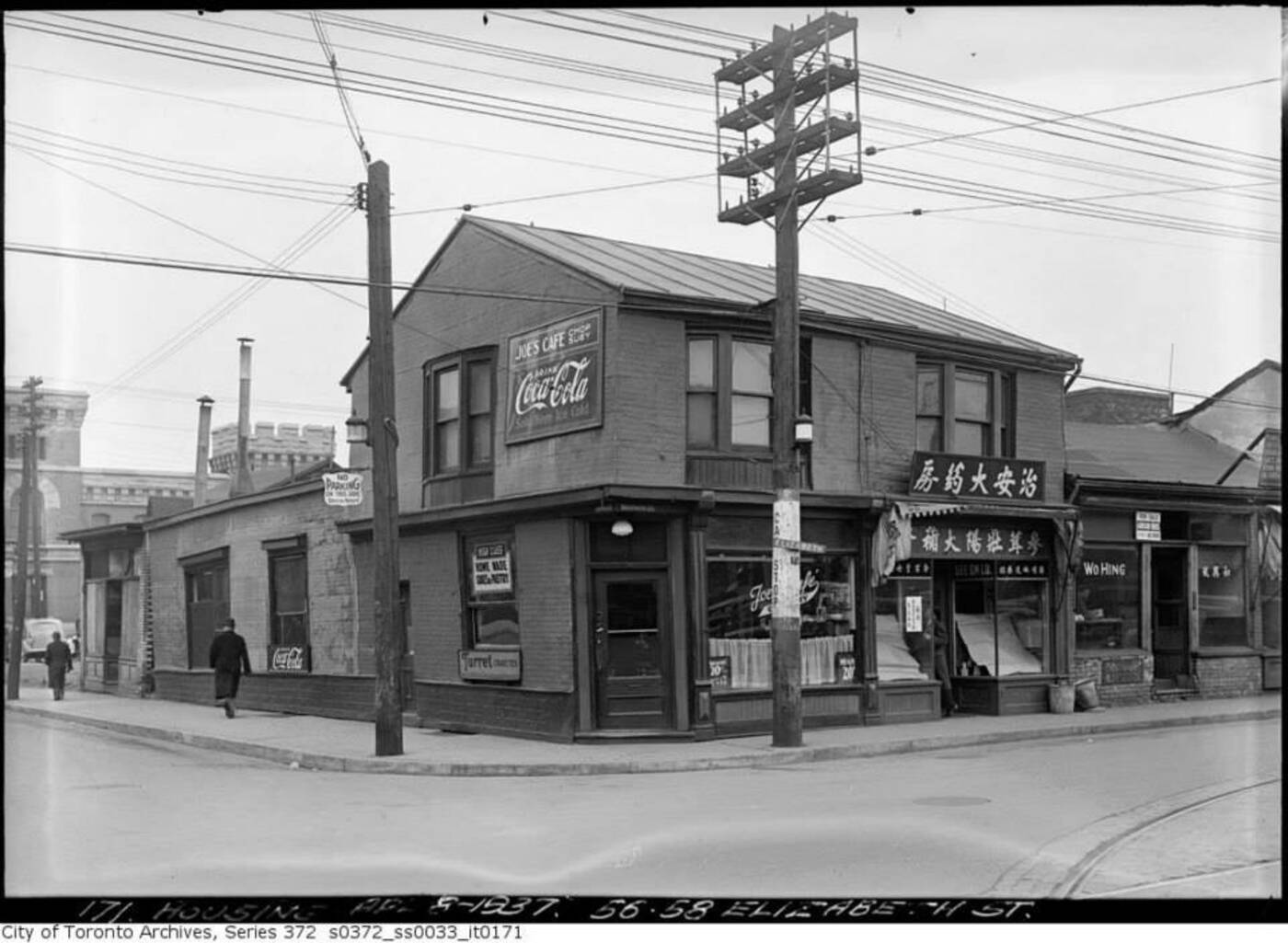 Toronto's Chinese population was tiny prior to the early 20th century, with roughly 200 residents scattered in various areas, including clusters on Queen East near George St. and Queen West near York St.

The burgeoning Queen East Chinatown was short-lived, but the one to the west of Yonge would eventually migrate north towards Dundas St. and become the city's first major Chinese community. 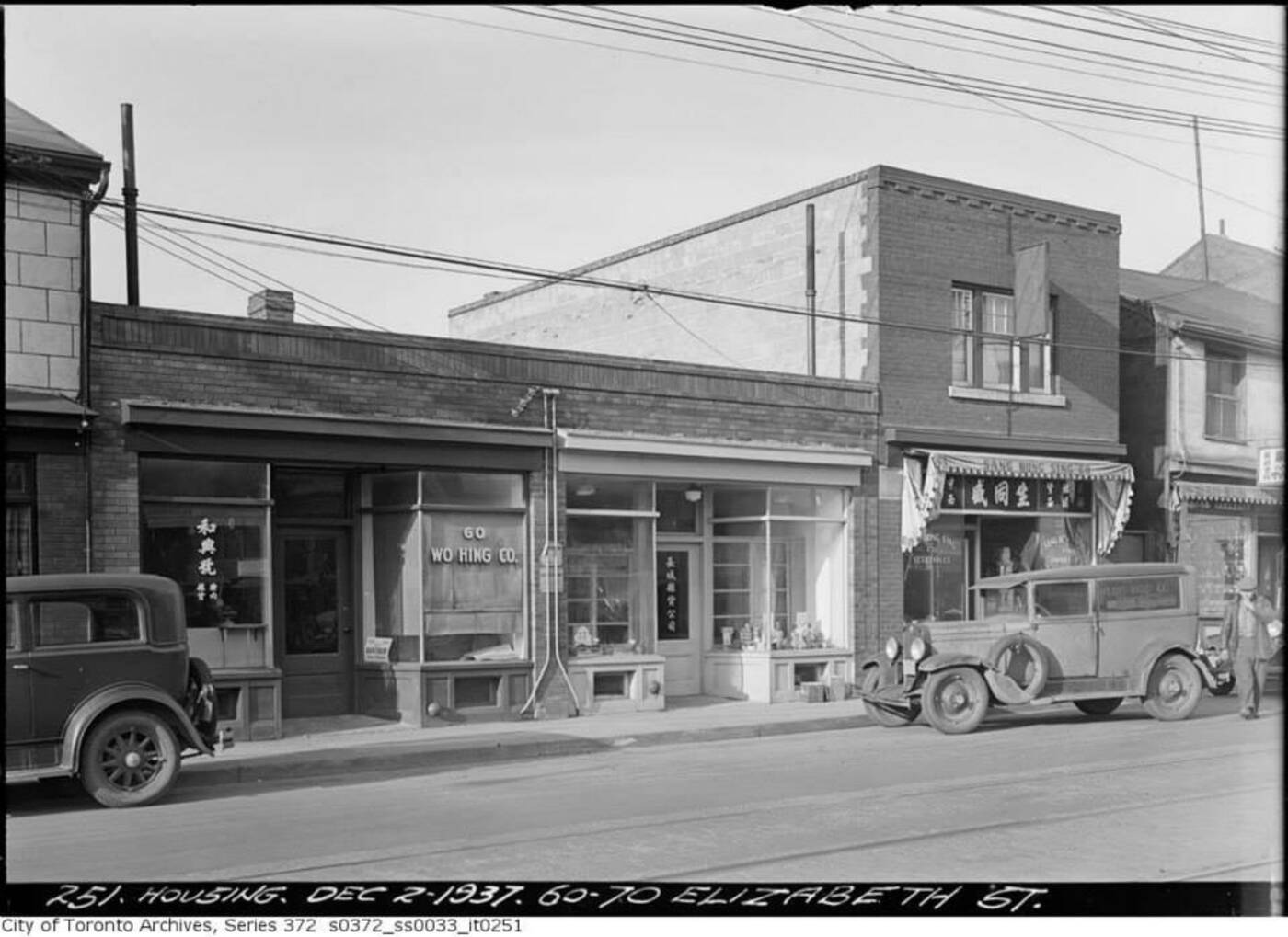 By 1910, the Chinese population in Toronto was creeping towards 1,000 and storefronts along Elizabeth St. started to bear Chinese-language signage.

This was the same period when Chinese restaurants first opened in the city. The laundries still existed, but the community's business interests diversified as it grew. 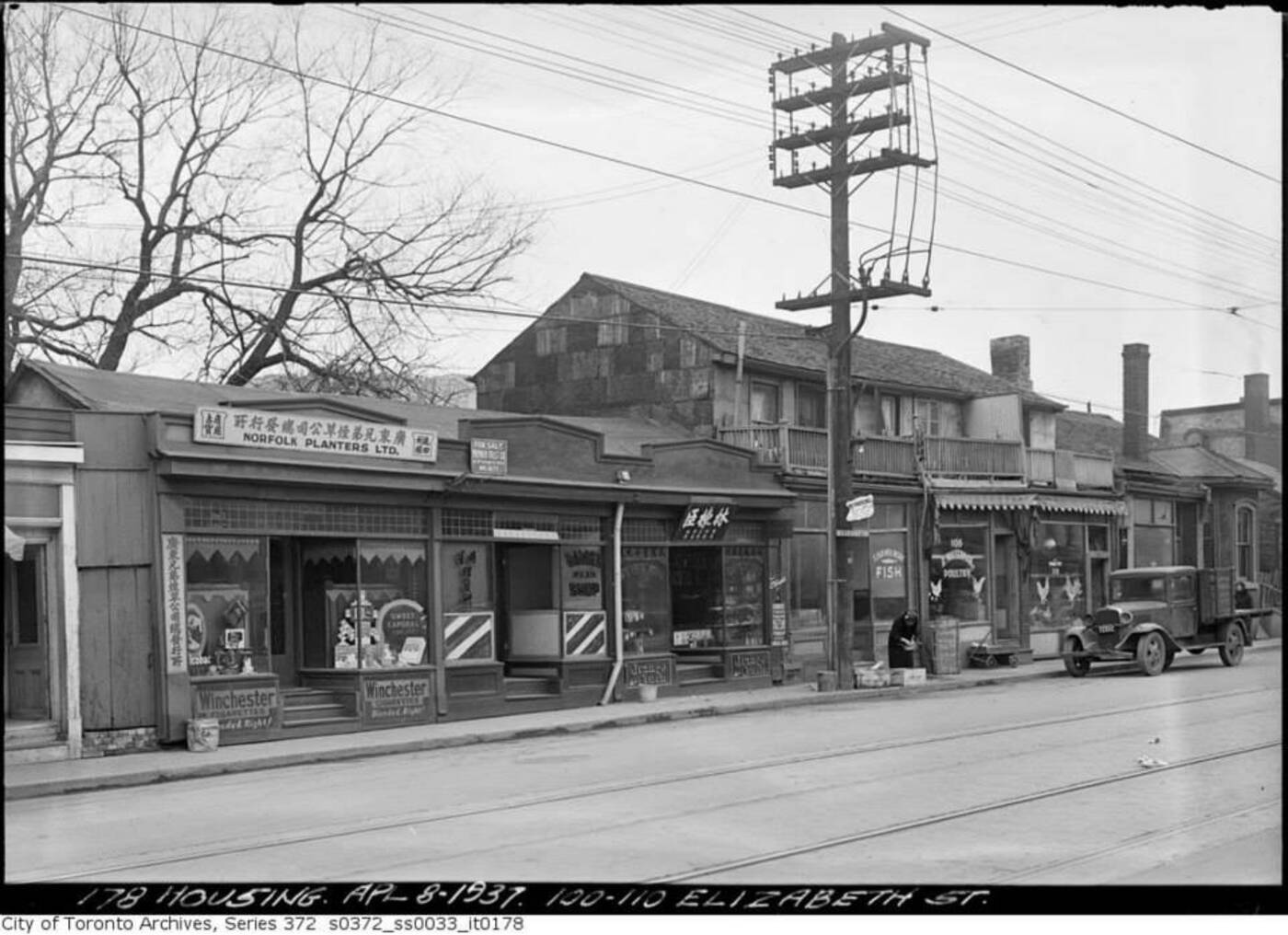 Over the next 40 years, the Elizabeth St. Chinatown was a robust and thriving community, housing both the businesses and residences of the city's Chinese population, which was now growing rapidly.

It's quite possible that this Chinatown would have remained the primary hub of Chinese culture in Toronto had it not been for the arrival of New City Hall, which expropriated many businesses and knocked out whole streets of the old Ward neighbourhood. 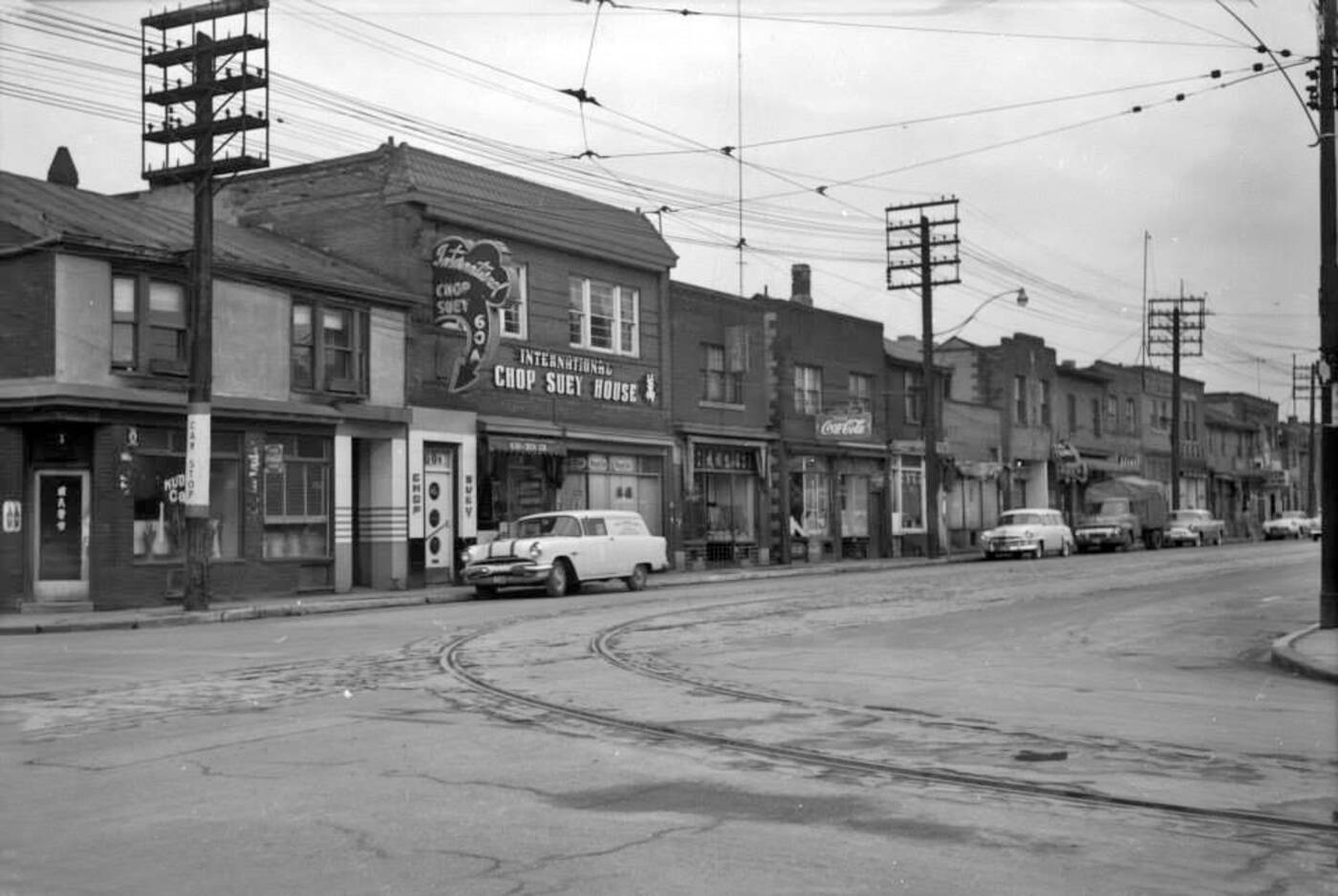 Despite the fact that so many Chinese businesses were razed for the construction of Nathan Phillips Square, remaining area residents successfully fought city plans to relocate the community outright.

Rising real estate prices, however, led to the gradual shift of Chinese businesses west along Dundas St., which gave rise to one of the main Chinatowns that we know today. 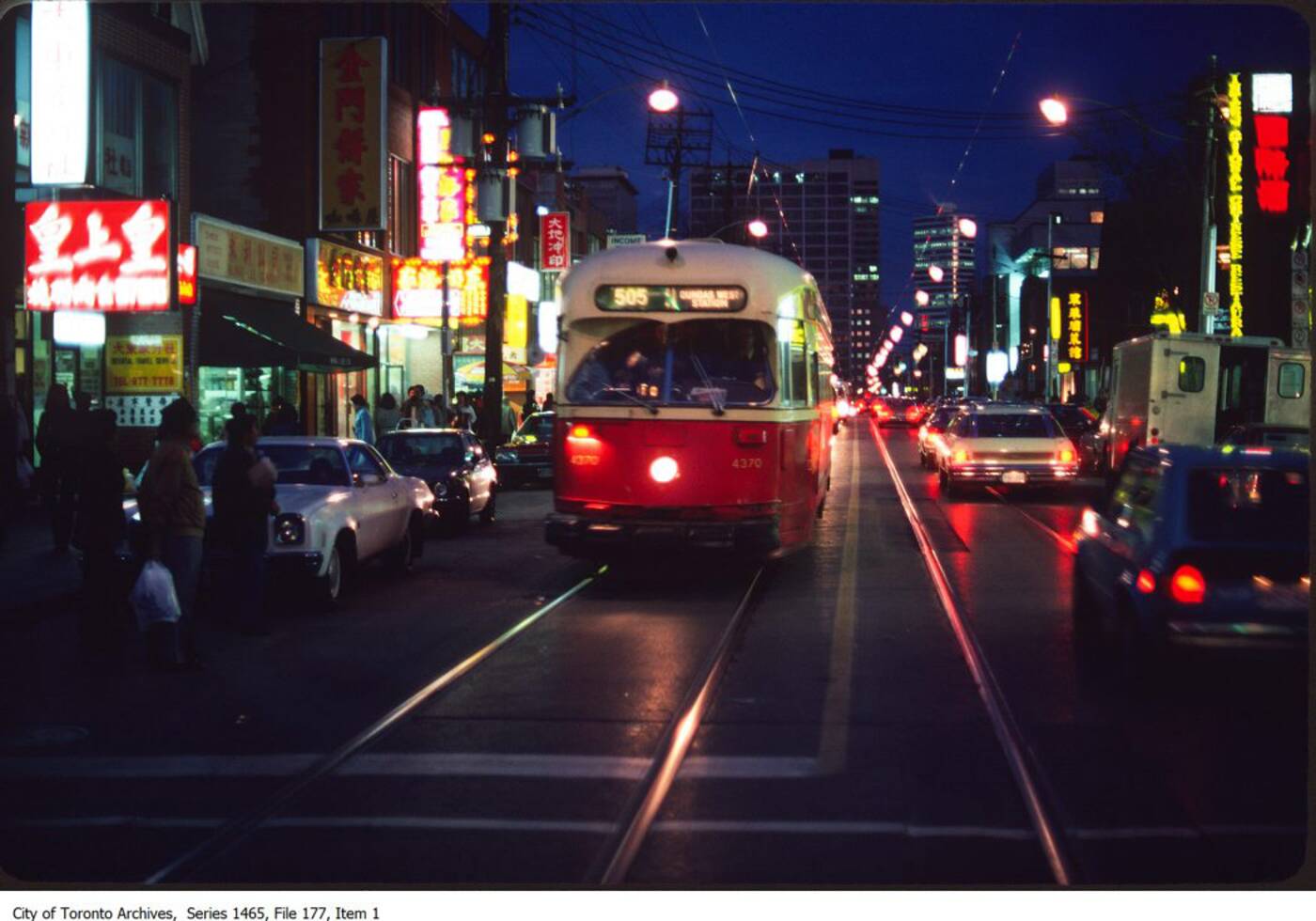 Toronto's Chinatown West, concentrated around Dundas and Spadina, arose as the Jewish population moved away from the area in the 1960s. By the 1970s, half of the area was populated by Chinese residents, while grocery stores and restaurants proliferated.

By 1979, the area was afforded a special identity by the city planning department, which ensures that character of the neighbourhood is protected from massive redevelopment. 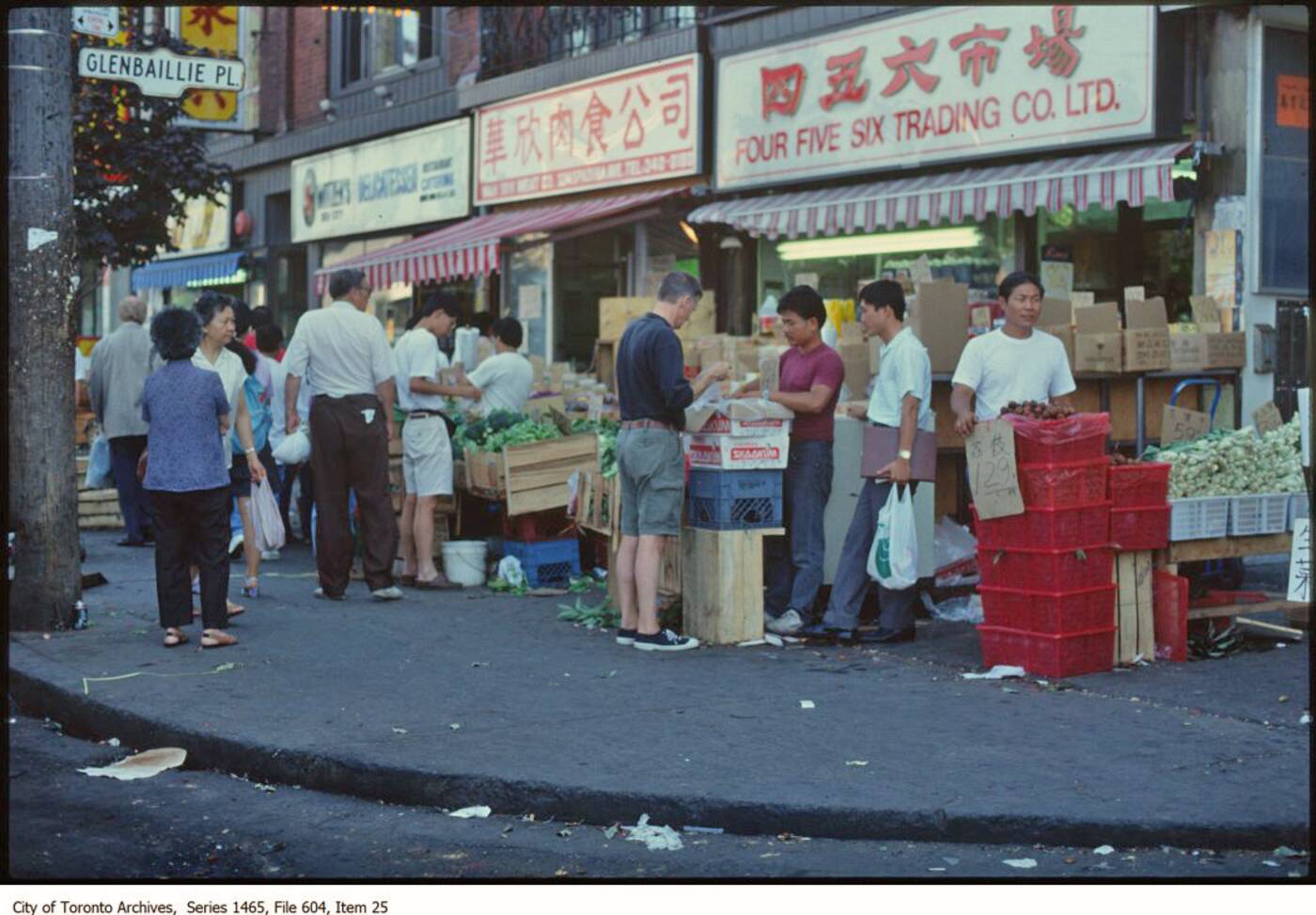 Thanks to these protections, the visual character of Chinatown West has remained remarkably consistent for the last three decades. Take a look at photos from the area between the late 1970s and 1990s, and unless there's vehicles in the background, you'll likely have difficulty placing the year with any precision. 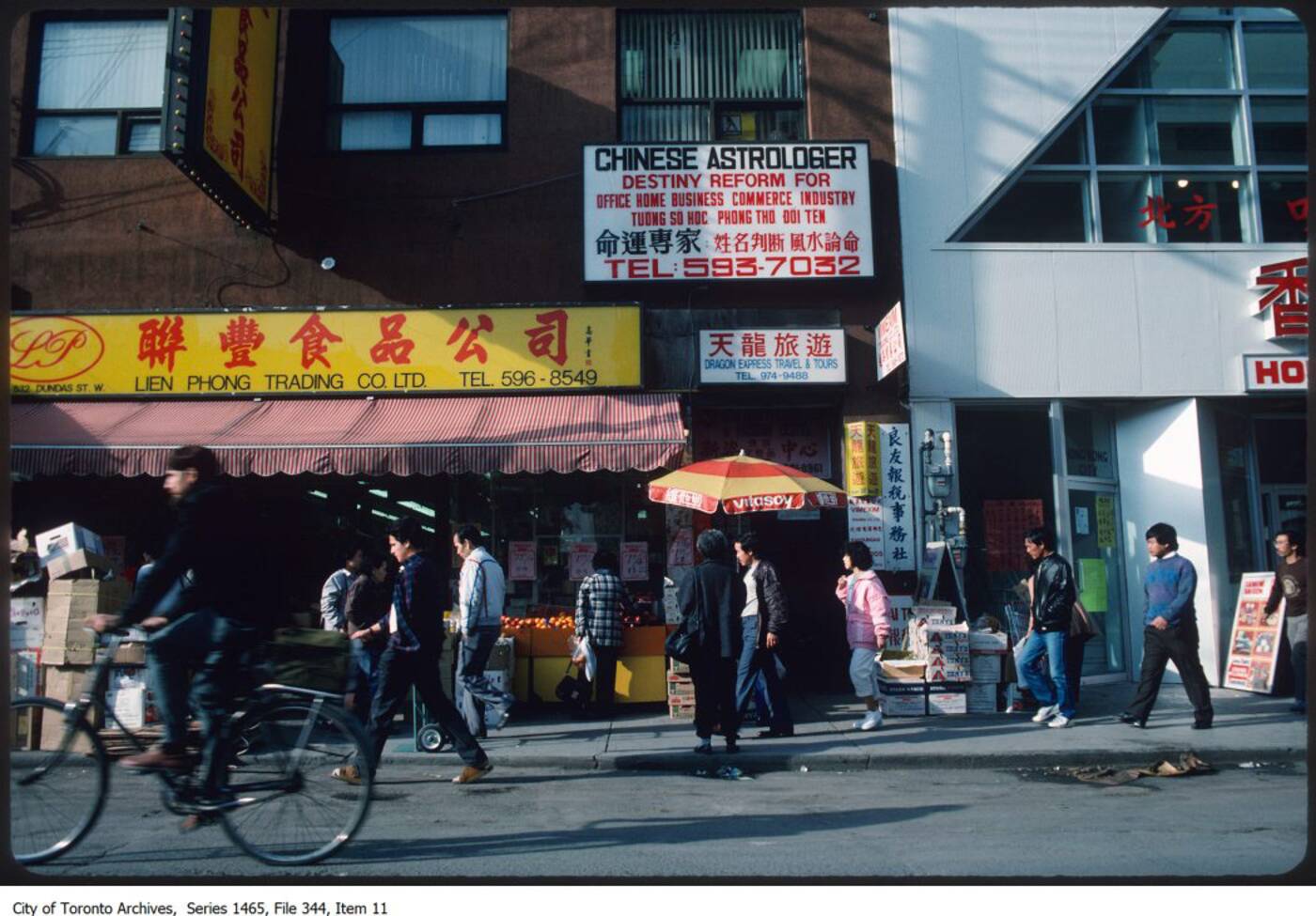 In fact, the most significant change to the neighbourhood came in the 80s when the street was ripped up to install dedicated lanes for the 510 streetcar.

This project led to the removal of the diagonal parking on Spadina from College St. to just north of Queen, which was a signature of the street that distinguished it from pretty much every other major thoroughfare in Toronto. 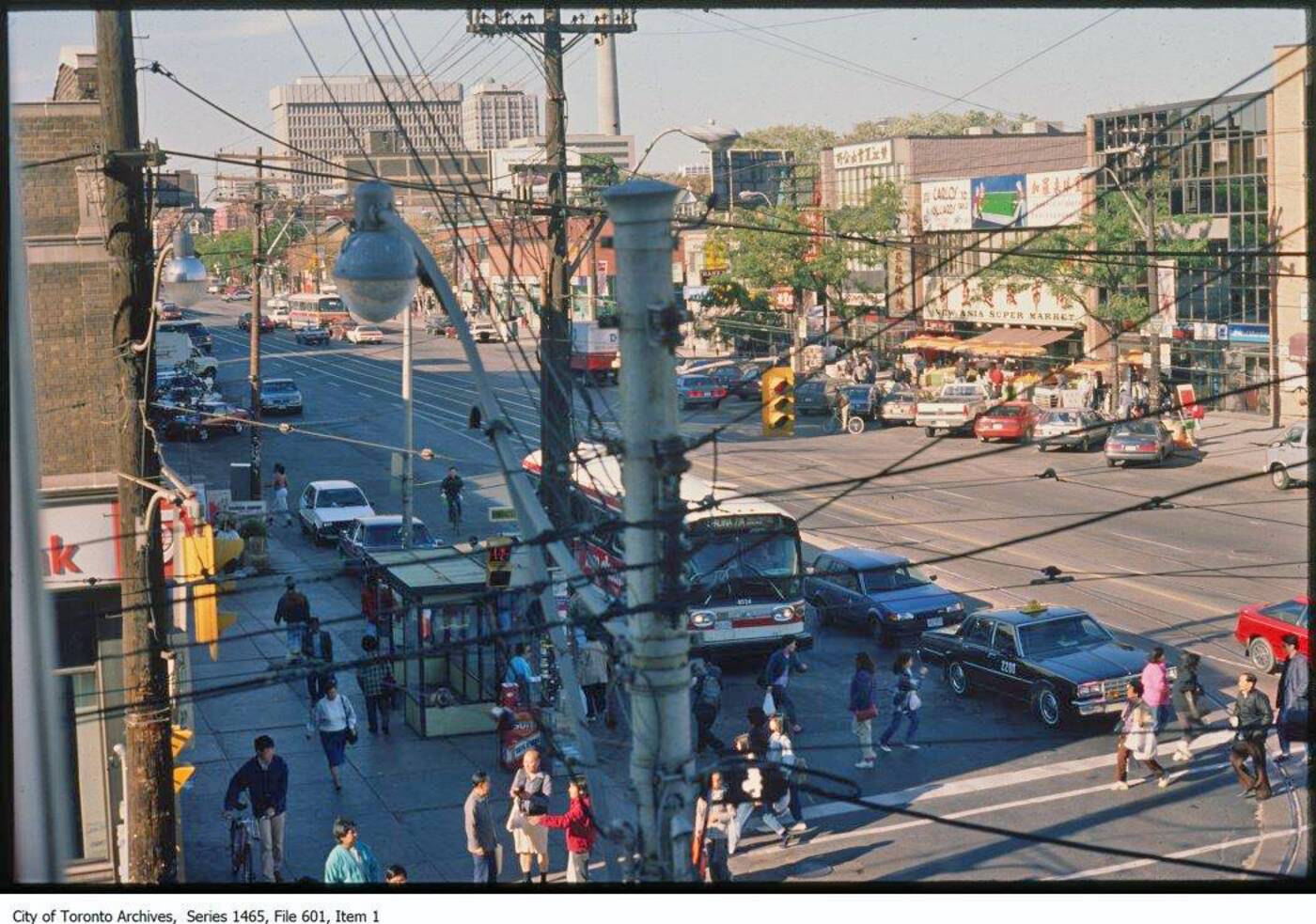 The story of East Chinatown is directly linked to the success of Chinatown West. As the latter neighbourhood hit its stride in the late 1970s, it became more and more expensive to live there.

While Dundas and Spadina was the commercial hub, many families were attracted to the Riverdale area for home occupancy. 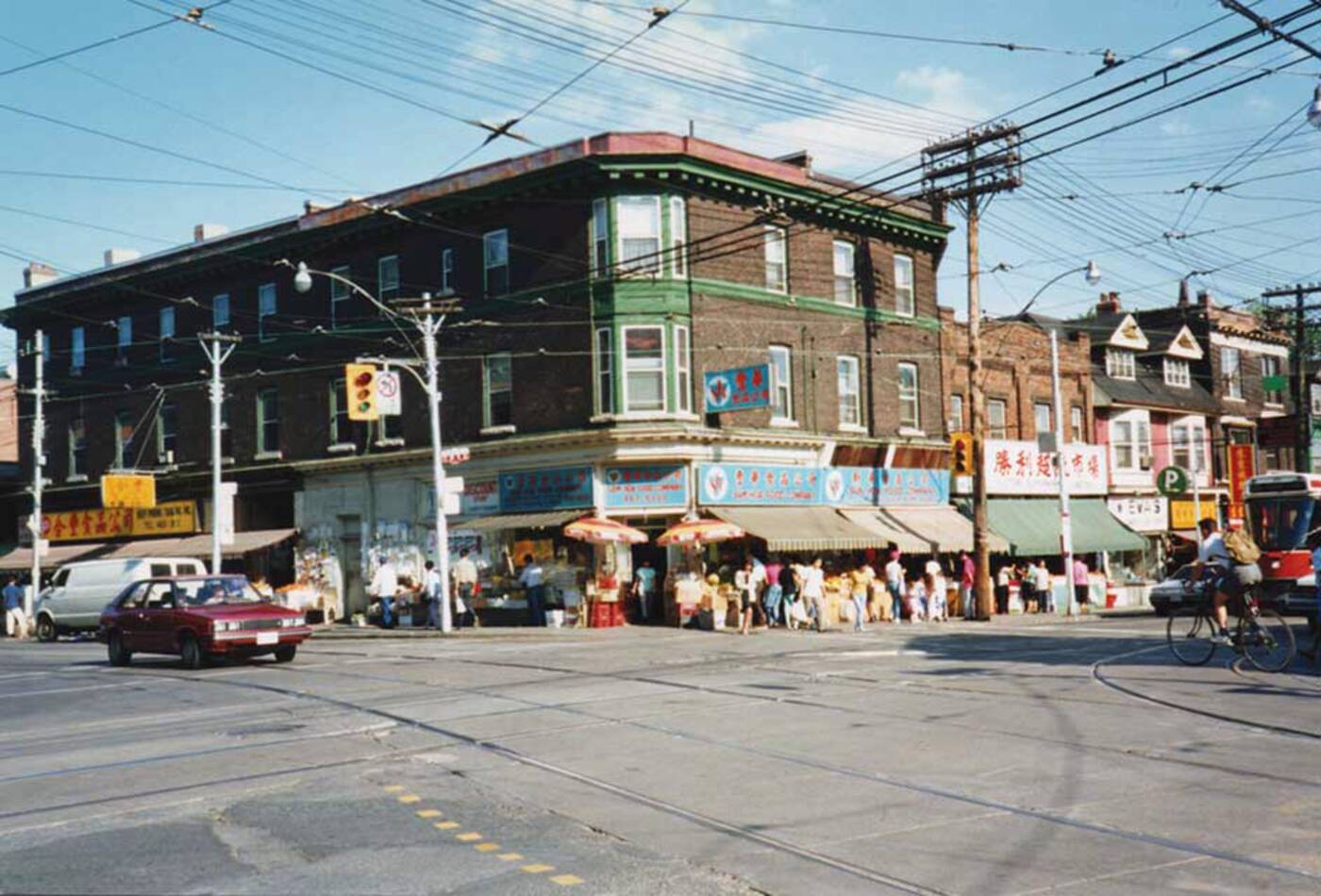 Unsurprisingly, as the number of Chinese residents increased in Riverdale, businesses started to pop up in the area. There was almost no visible Chinese presence in the neighbourhood at the outset of the 1970s, but by the mid 80s, storefronts had radiated from Gerrard and Broadview south towards Dundas and east toward Boulton Ave. 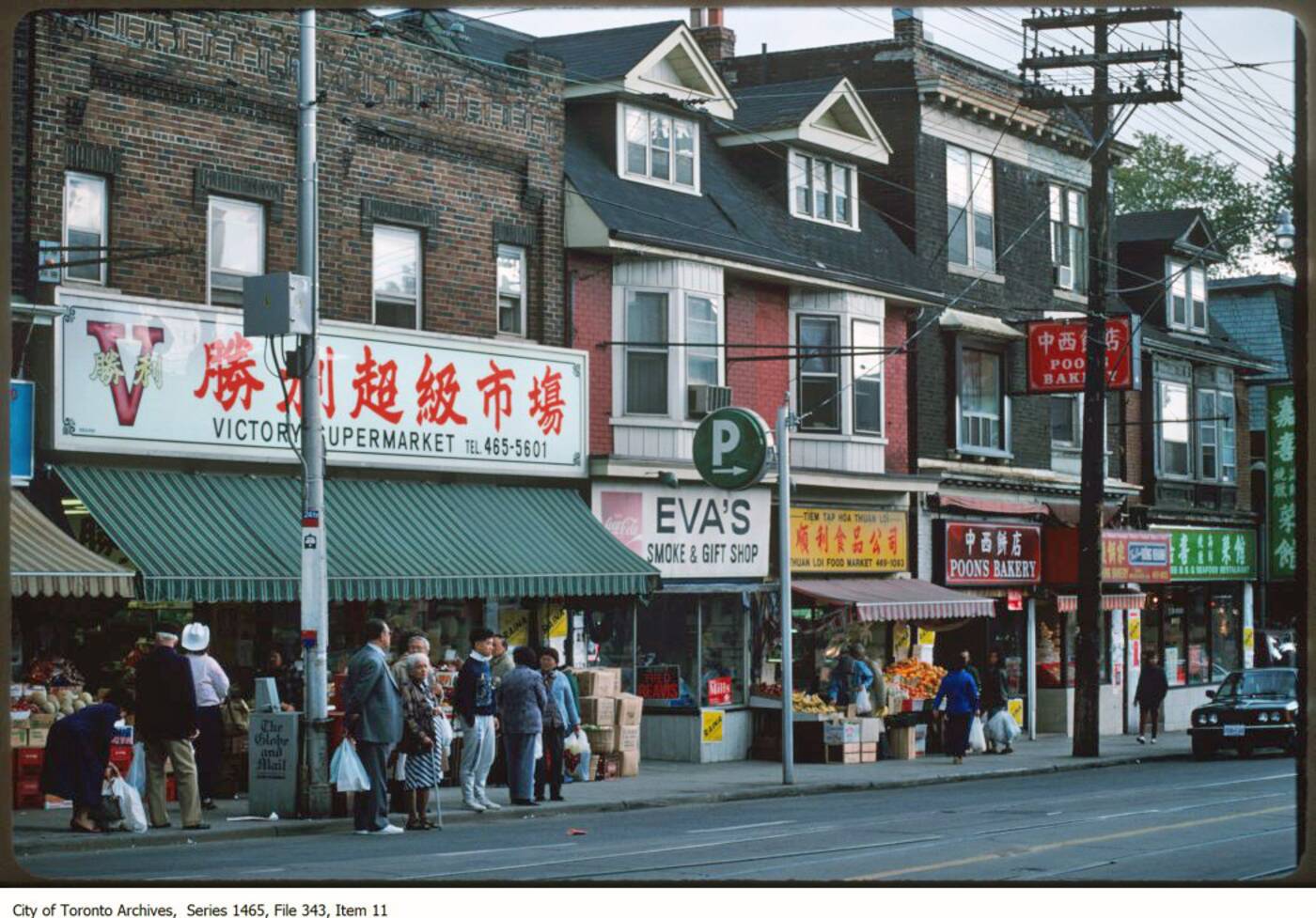 Today, both Chinatowns remain stable hubs of Chinese culture in Toronto, even as large segments of the population have migrated away from the neighbourhoods.

Now you'd have to argue that the Pacific Mall deserves its own designation as a Toronto-area Chinatown, as well as other pockets of Markham.

The rise of new Chinatowns is in keeping with the history of Toronto's Chinese population, though the two downtown hubs are so entrenched in our urban culture that it's impossible to imagine the city without them.