For the second time in less than two months, Canada Post has decided to halt mail delivery to a residential building in Toronto due to the fact that people on the premises won't wear masks.

Residents at 105 West Lodge Ave, near Lansdowne between Queen and Dufferin, received a notice from the Crown postal operator this week stating that they will now need to pick up all of their mail from a facility on Commissioners Street in the Port Lands for the foreseeable future.

The reason for the move is that delivery agents have been "unable to maintain proper physical distancing with tenants who are not wearing a face covering."

"We recognize our delivery agent's right to remove themselves from unsafe circumstances," the missive continues, adding that masks are required in all indoor public spaces — including in condo and apartment common areas — per City of Toronto bylaws. 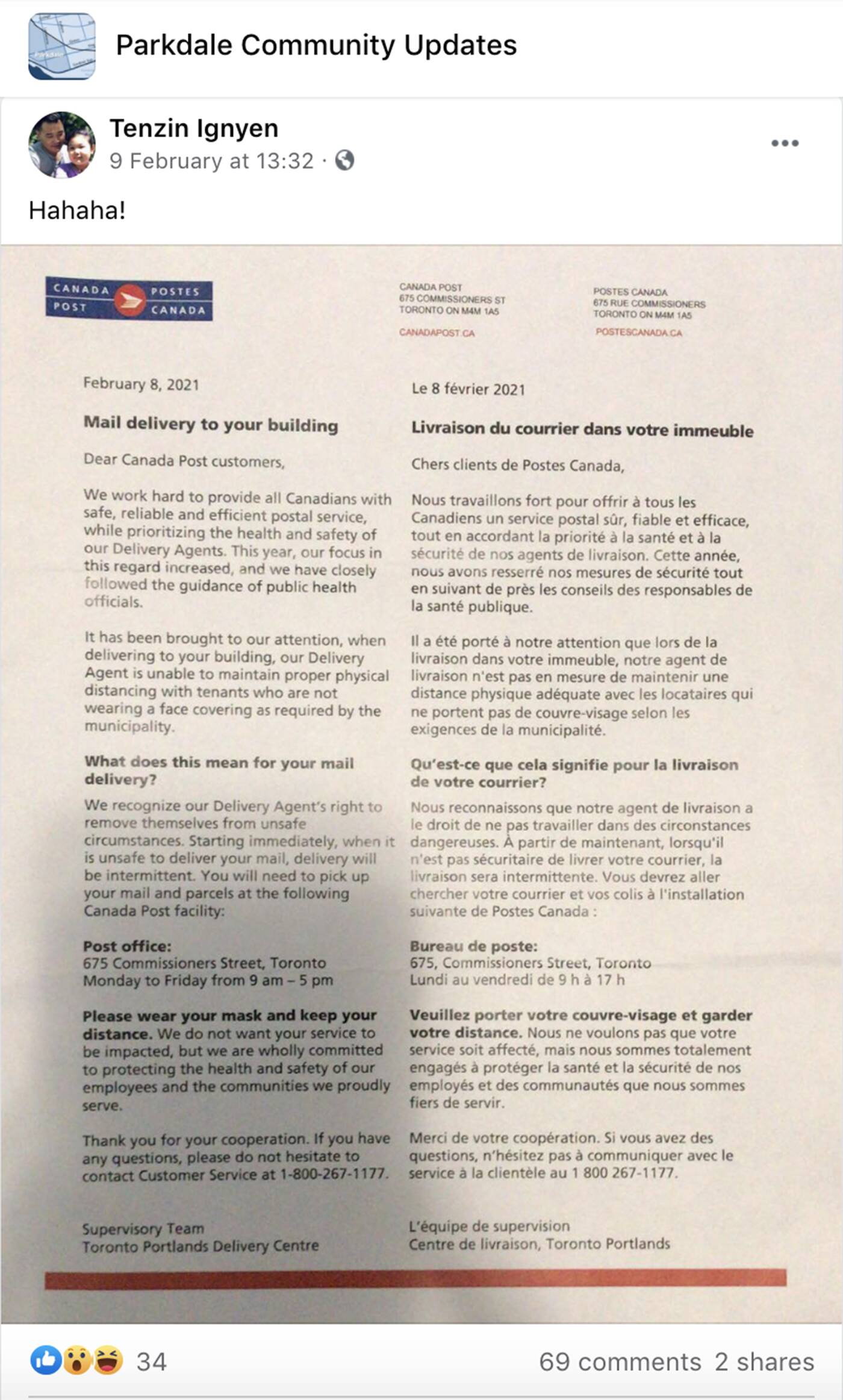 Mayor John Tory last month vowed to "drill down" on noncompliance in residential complexes after an influx of complaints to the municipality.

As he noted in a press conference, it is up to property management or the building owner to post proper signage indicating the mandatory face covering rule, and ensure that it is being followed.

As members of the Parkdale Community Updates Facebook group have noted in a thread on the topic, there have indeed been many instances of residents not wearing masks when they should be, as well as contractors working in the complex, which along with its neighbour 103 has over the years adopted the epithet of "Worst Lodge" among some.

According to one member who claims to have spoken with the Canada Post carrier who dropped off the notice, "they made it clear that our landlord (Hazelview) has known about this issue for months — and it wasn't communicated to us, nor did they do anything to remedy the situation."

Many are also pointing out how far Commissioners Street is from the Parkdale address: about a two hour walk, one hour transit ride or 2o minute drive.

The last time Canada Post suspended delivery to a building for this reason, it ended up reversing the decision shortly thereafter due to successful negotiations with building management to resolve the issue and ensure health and safety protocols are being heeded.

Hopefully, 105 West Lodge residents can hope for the same outcome ASAP in this case.