The 5 most notable new cannabis stores in Toronto

Cannabis stores in Toronto increased exponentially during 2020. It's no secret that the city has lost scores of restaurants and bars since the onset of the pandemic, but when it comes to weed stores, there's no shortage — especially in specific clusters of the downtown core.

It's hard to keep track of them all, especially with so many more authorized pot shops on the way. Considering all product comes from the Ontario Cannabis Store, don't expect stock or price to vary dramatically across the board, either.

Still, there are some independent shops that stand out beyond just selling weed, with local activism bents or unique interiors — something to look forward to for when we can do more than just delivery and curbside pick-ups.

Here are some notable new cannabis stores in Toronto.

Despite a long drawn-out application process that delayed this Little Italy store's opening by nearly a year, GreenPort is already positioned to become a hub for the cannabis community thanks to owner and cannabis activist Vivianne Wilson.

Advocating for small businesses, diverse representation in the industry, and better access to weed for racialized groups, GreenPort is the first Black female-owned retail cannabis company in Canada. GreenPort will hopefully resume running community events when things open back up.

This family-owned store takes the idea of purple urkle to the next level. Everything at this Annex shop is purple-hued, including the exterior, which makes it hard to miss if you're heading along Bathurst.

As for its namesake, the dispensary is named after a Toronto girl who suffered from a chronic condition. Dolly used cannabis to alleviate her pain, and you can find her art all over the store. The store boasts some budget-friendly options ranging from $20 for 3.5 grams. 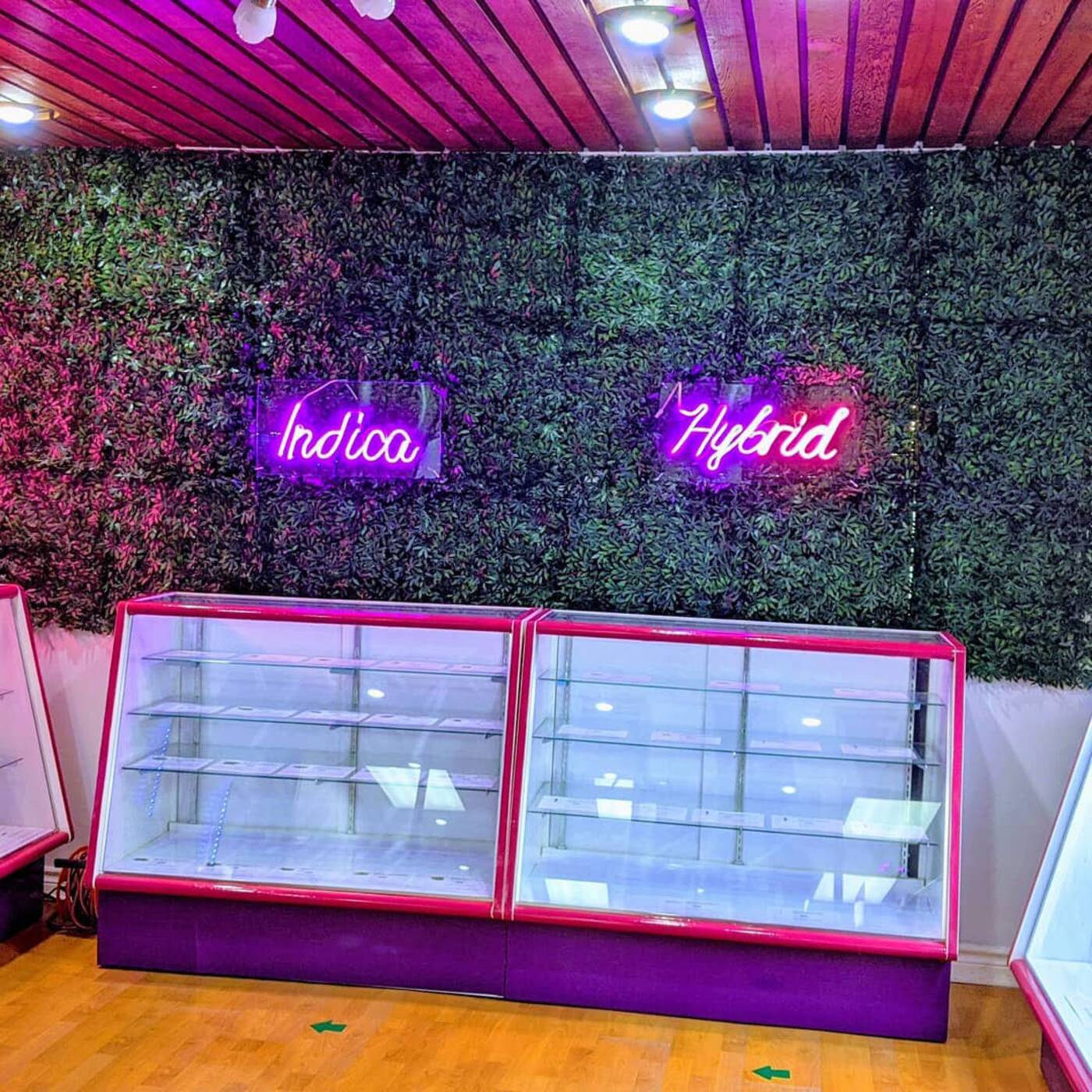 It's all purple everything at the dispensary Dolly's in the Annex. Photo via Dolly's Cannabis.

This chill weed shop in The Beaches pays homage to the network of pressurized pipes that used to run beneath Toronto's streets in the 1930s.

Instead of transporting newspapers and documents, like the original tubes, the Neighbourhood Joint uses a handy trio of pneumatic pipes that shoot up weed from storage downstairs to the cash registers upstairs. Seeing the system work is worth a visit (as is the super cute dispensary dog).

This West Queen West cannabis shop is an artsy reprieve for weed smokers who want to entertain their brains with some visual stimuli while re-upping. Axes desribes itself as both a weed store and an art collective, giving local artists a place to hang their works on the walls.

Dispensaries with artwork on display has not worked for everyone: Tokyo Smoke's Bloor East location removed their collection from artists like Banksy and Andy Warhol after being accused of using famous art to sell weed. Axes' focus on local works should hold over better. 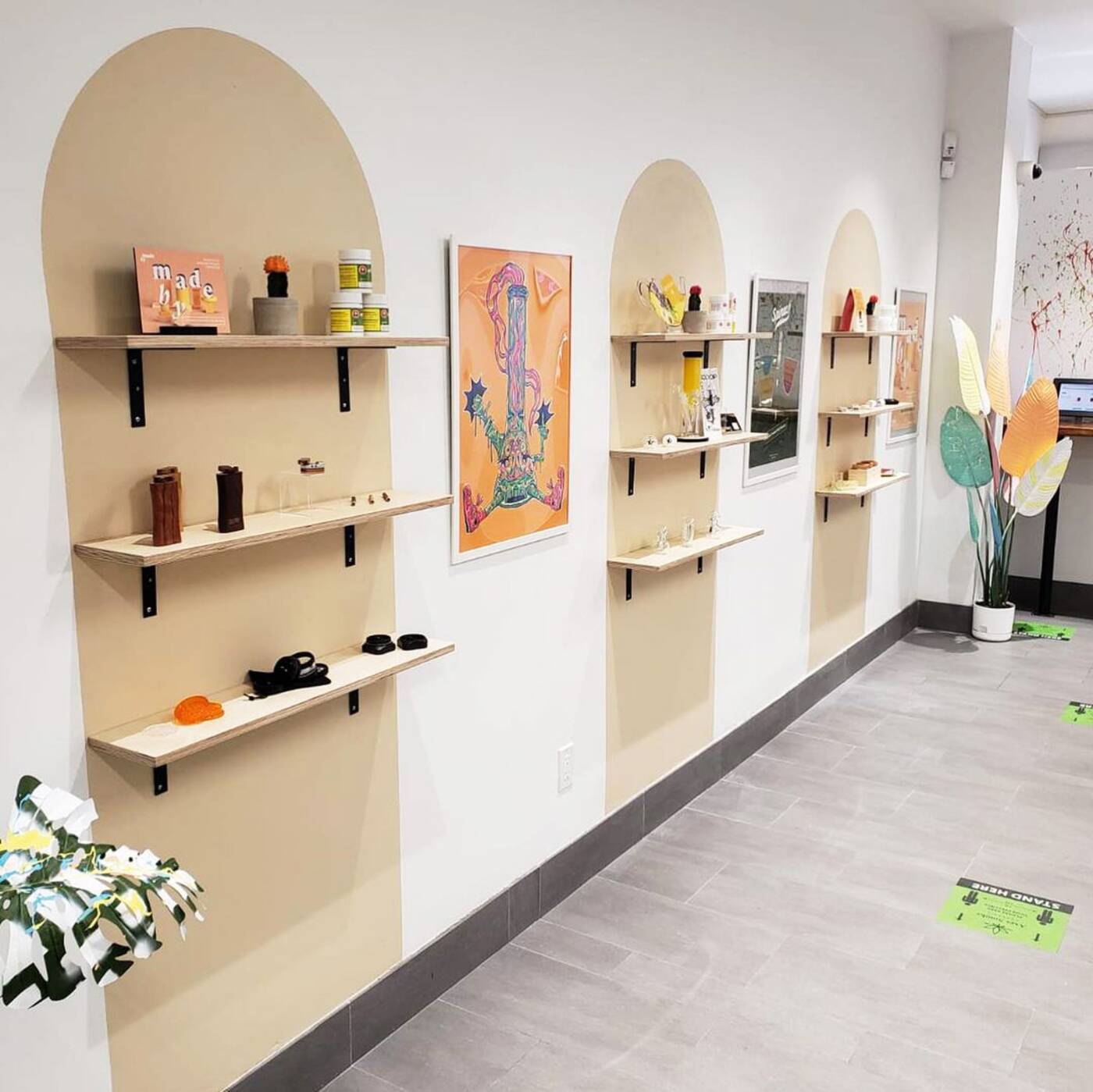 While there a handful of cannabis stores in Scarborough now, Local marked the first cannabis store to land in the neighbourhood when it launched this summer.

The family-owned dispensary has gained a following over the last few months, primarily because of its convenient location at Lawrence and Kennedy, which is generally under-served when it comes to, well, everything.

Hector Vasquez of the Neighbourhood Joint

The 5 most notable new cannabis stores in Toronto