Toronto neighbourhood takes action after getting tired of traffic from construction

Traffic jams in Toronto are nothing new and construction in the city seems never-ending, but one neighbourhood has decided they can no longer stand congestion and relentless honking.

The residents on Sterling Road in the Junction Triangle have resorted to posting large signs asking drivers to please stop honking. 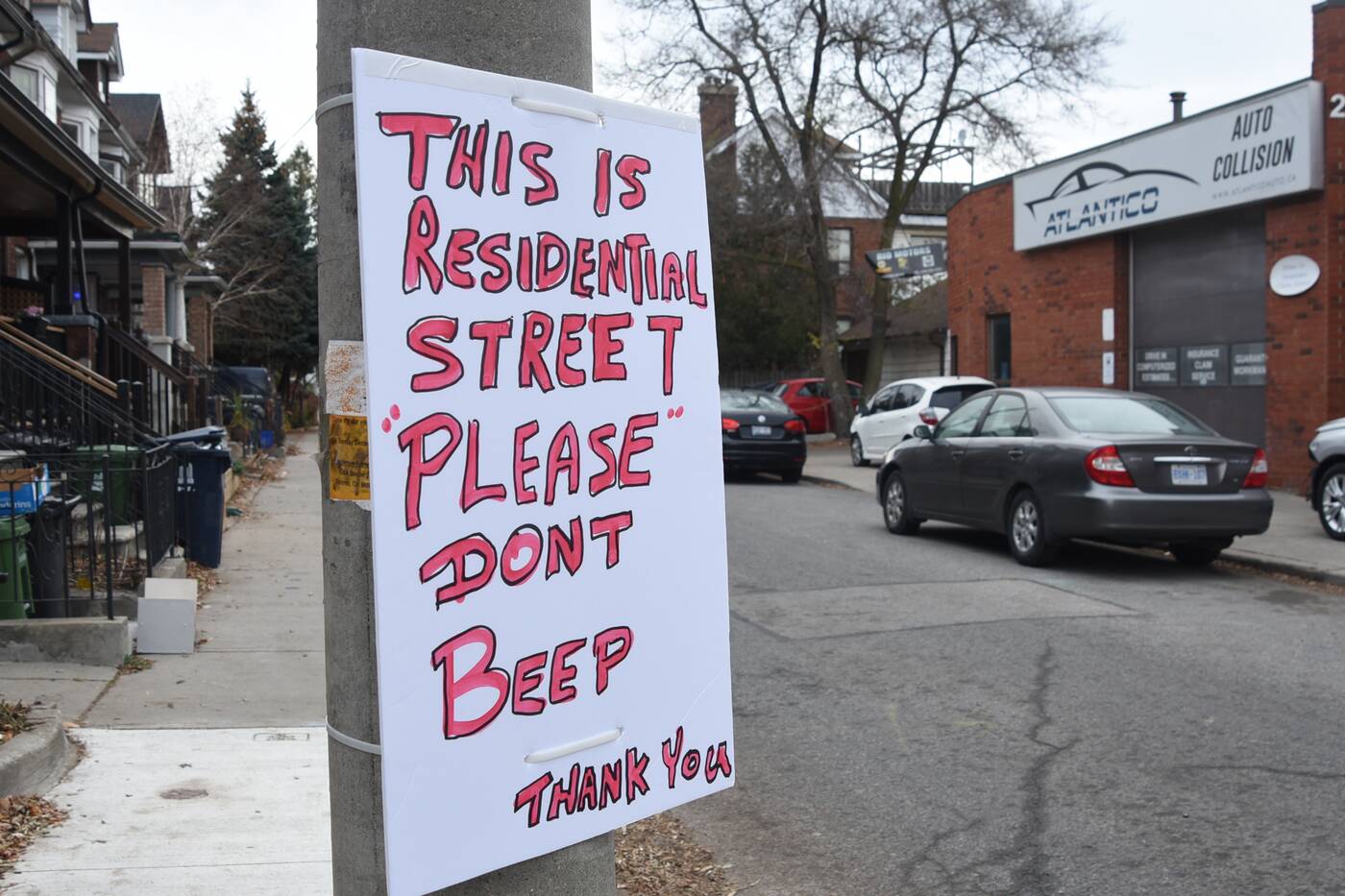 Signs are posted every couple of metres along Sterling Road asking drivers not to honk when delayed.

The trouble began for this neighbourhood when construction started this fall on Dundas Street West and College Street near Lansdowne Avenue.

Drivers are stopped at the intersection and forced to go around. Many end up driving up Sterling Road, a road home to the Museum of Contemporary Art (MOCA) and Henderson Brewing and farther north, a quiet residential street before ending at Bloor Street West. 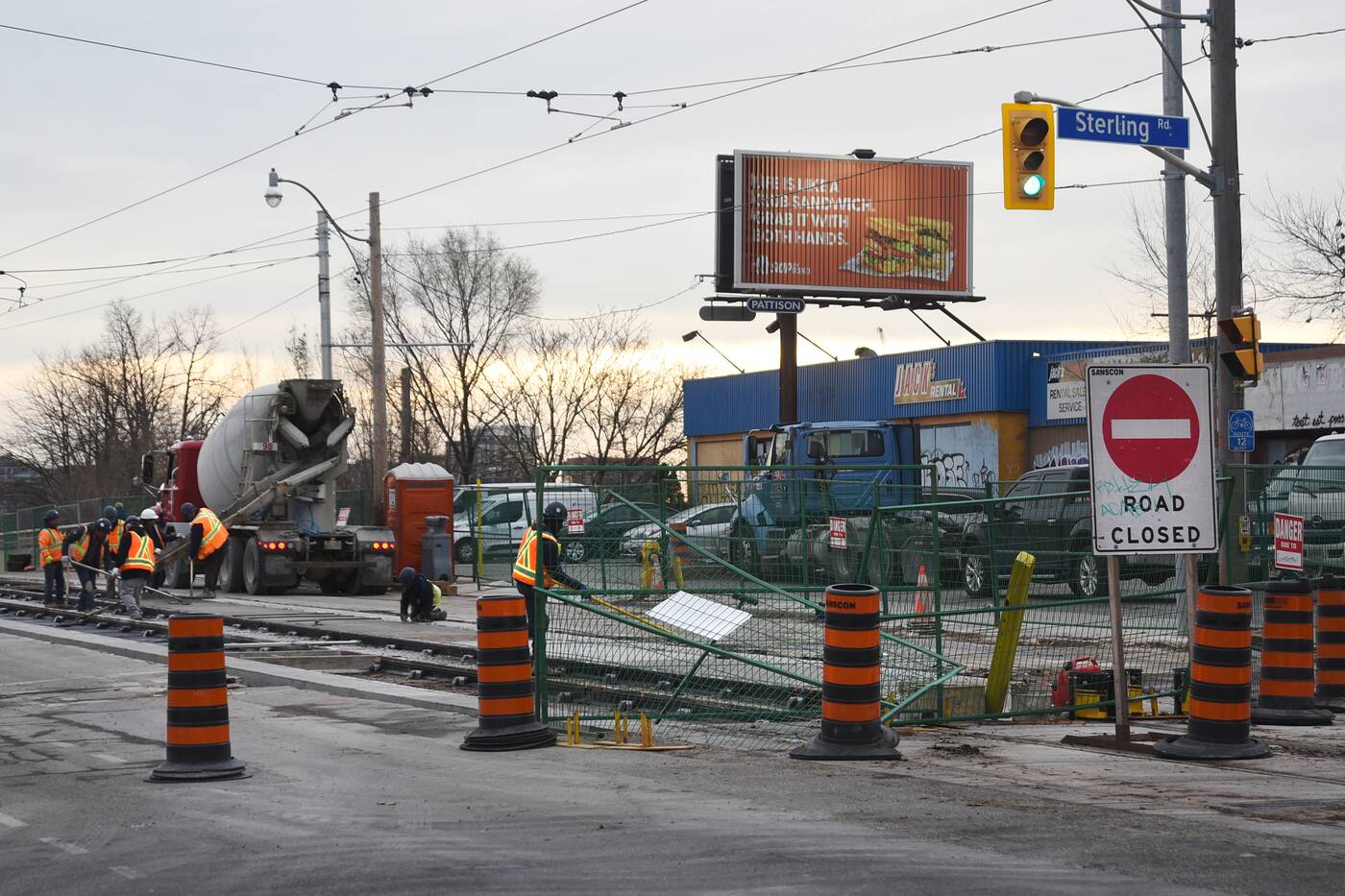 Track work on Dundas Street West and College Street has the road closed and pushes drivers up Sterling Road.

The signal at Sterling and Bloor has long wait times because of the unusual intersection layout when Sterling meets Symington Avenue (described as the worst). This, coupled with construction on Bloor, causes delays and thus the honking starts.

One area resident described it as "a shit show" and said it can result in drivers getting delayed with cars backed up a block.

"People have been trapped in there for up to 30 minutes when it has been really, really bad," he said.

The honking from frustrated drivers gets them no farther ahead and it is clearly annoying the people who live there. 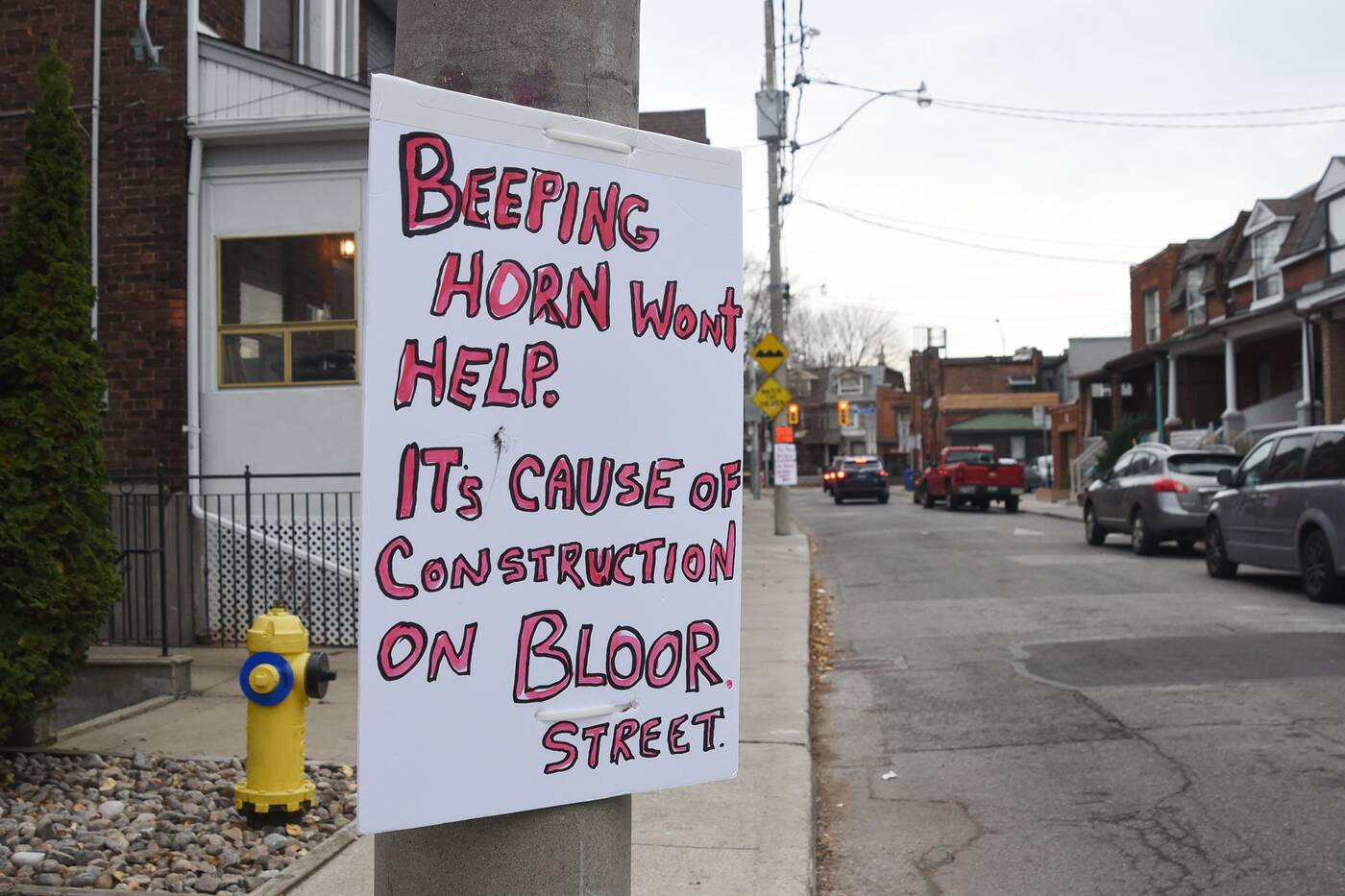 Drivers don't seem to be reading these signs on Sterling Road and keep honking.

The signs are posted every few metres along the street will help get the message across. But in one recent trip down the street, drivers were honking anyway, despite the ample signage.

Once the drivers get out onto Bloor Street West, there are more delays. Drivers have even been spotted in the bike lanes attempting to save a bit of time. 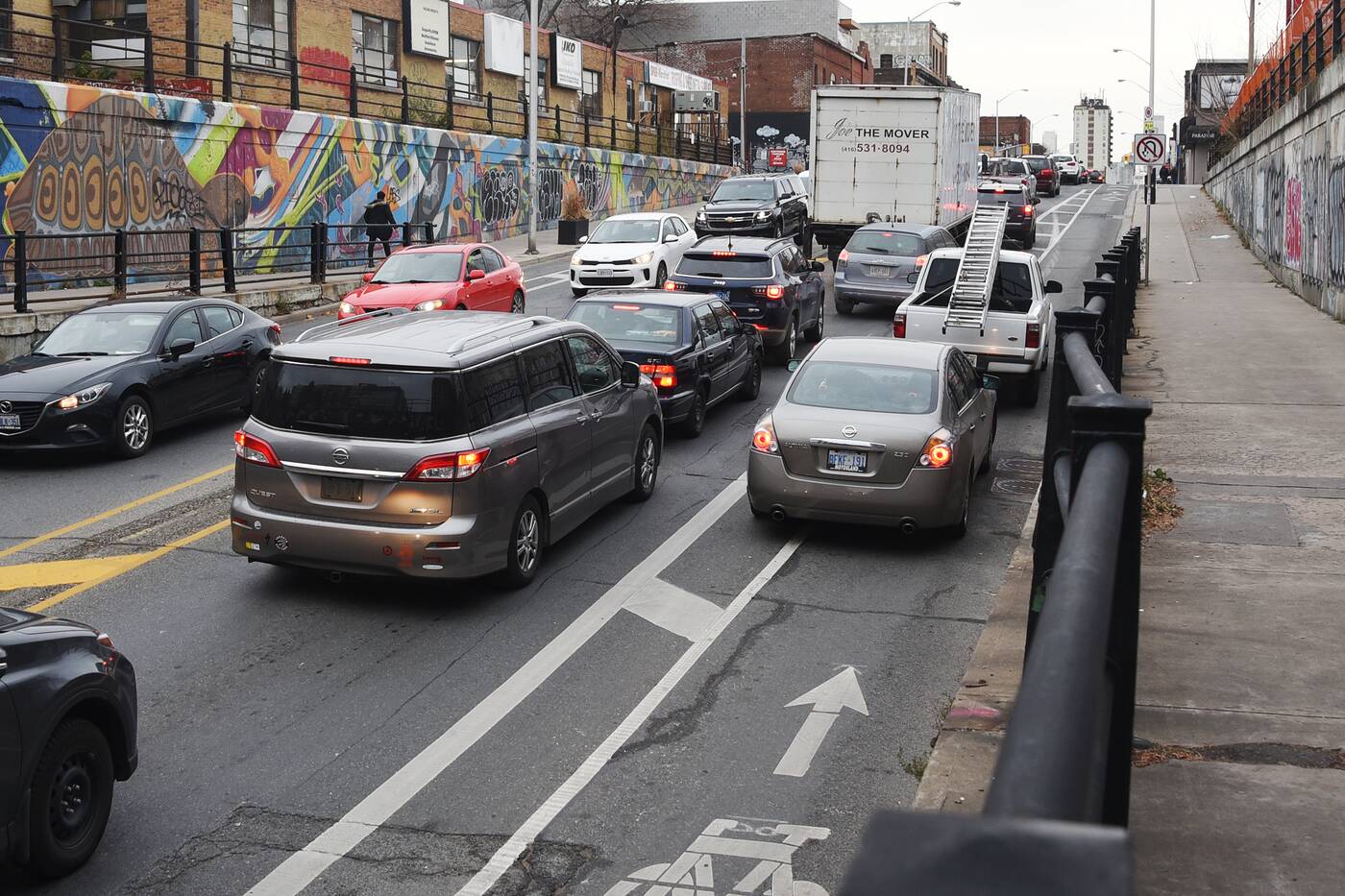 Frustrated drivers try to save time by driving in the bike lane on Bloor Street West.

The city said they are working on the issue.

"The City is aware of the resident concerns on Sterling Road and staff, as part of the City's Work Zone Coordination team, have been actively working with the local Councillor's office and the local community, as well as other project stakeholders to mitigate traffic congestion created by the nearby construction as much as possible," a City of Toronto spokesperson told blogTO in an email.

The city has put paid duty officers at key intersections affected by the closure, including the intersection of Symington Avenue/Sterling Road/Bloor Street West and "additional signage has been posted in the area, and in advance of the area, to advise drivers to use a different route." 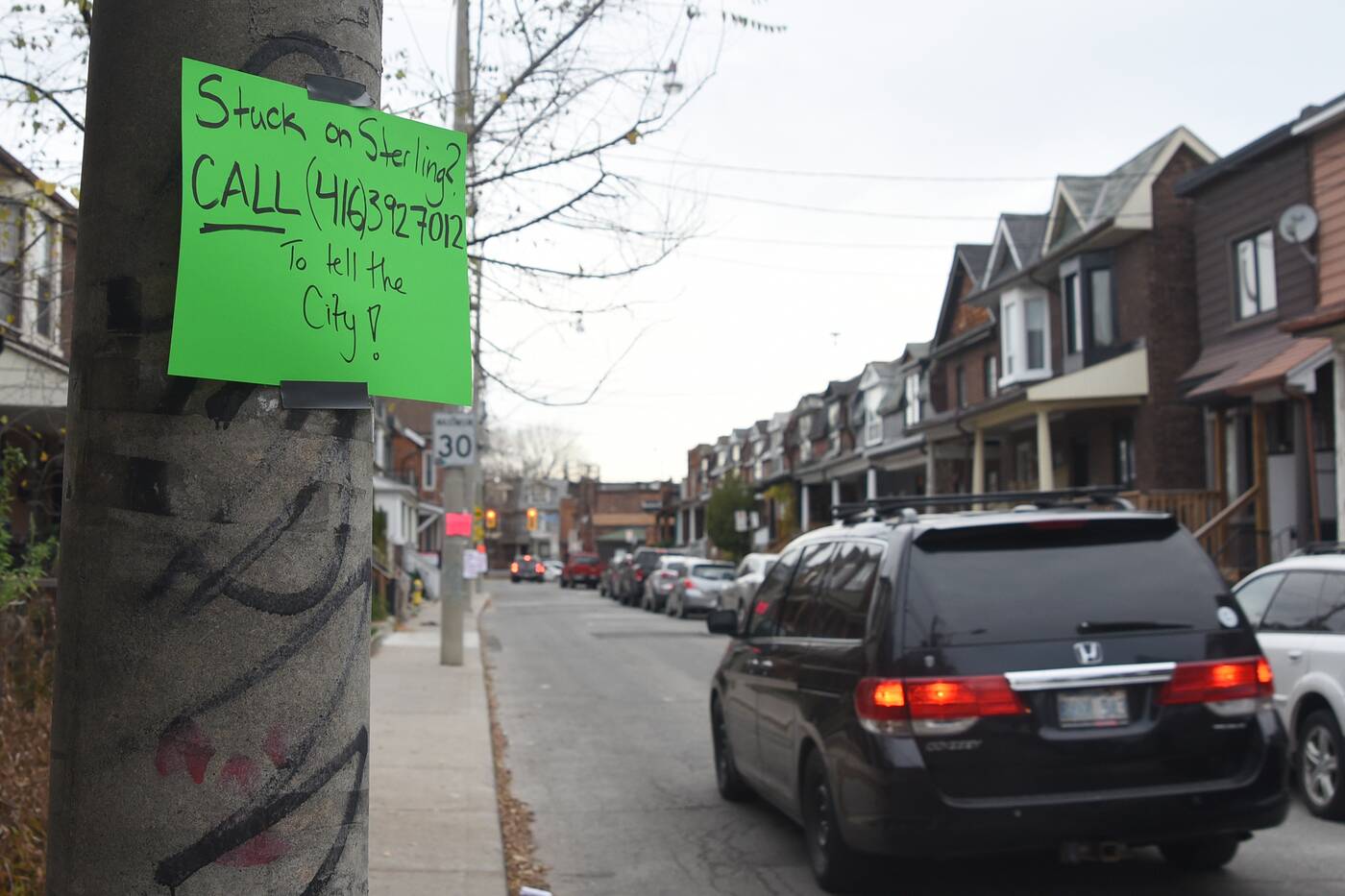 One sign suggests drivers call the city to complain about traffic congestion.

They have also adjusted the traffic signal timings in the Sterling Road area to help reduce congestion. But with the construction not expected to be complete until December, drivers and residents will have a few more weeks of frustration ahead.

"The City continues to advise drivers to avoid the area if possible and to plan travel ahead of time."

Hopefully, for the sake of the residents on this street, drivers will start to get the message.