Staff members at Toronto's Pearson International Airport are being praised around the world this week for catching an energetic rescue dog who, upon landing in Canada, escaped from a plane to tear around the runway for at least 12 hours.

Crystal, a white Podenco, had boarded a British Airways flight in Spain with members of a Nova Scotia-based rescue organization that facilitates adoptions between abandoned Spanish Podencos and people in Atlantic Canada.

Four Podencos were on the flight, including Crystal, all of them en route to their new forever homes. They touched down at Pearson, the second-busiest international airport in North America, around 8 p.m. on Monday evening last week.

Three of the dogs emerged from cargo in Toronto for their transfer flight to Halifax without incident, but Crystal was nowhere to be found.

That is, until it became apparent that her crate had not been properly fastened in Spain, and that it was her who was running all over the landing strip, causing people to see brief flashes of white in the dark. 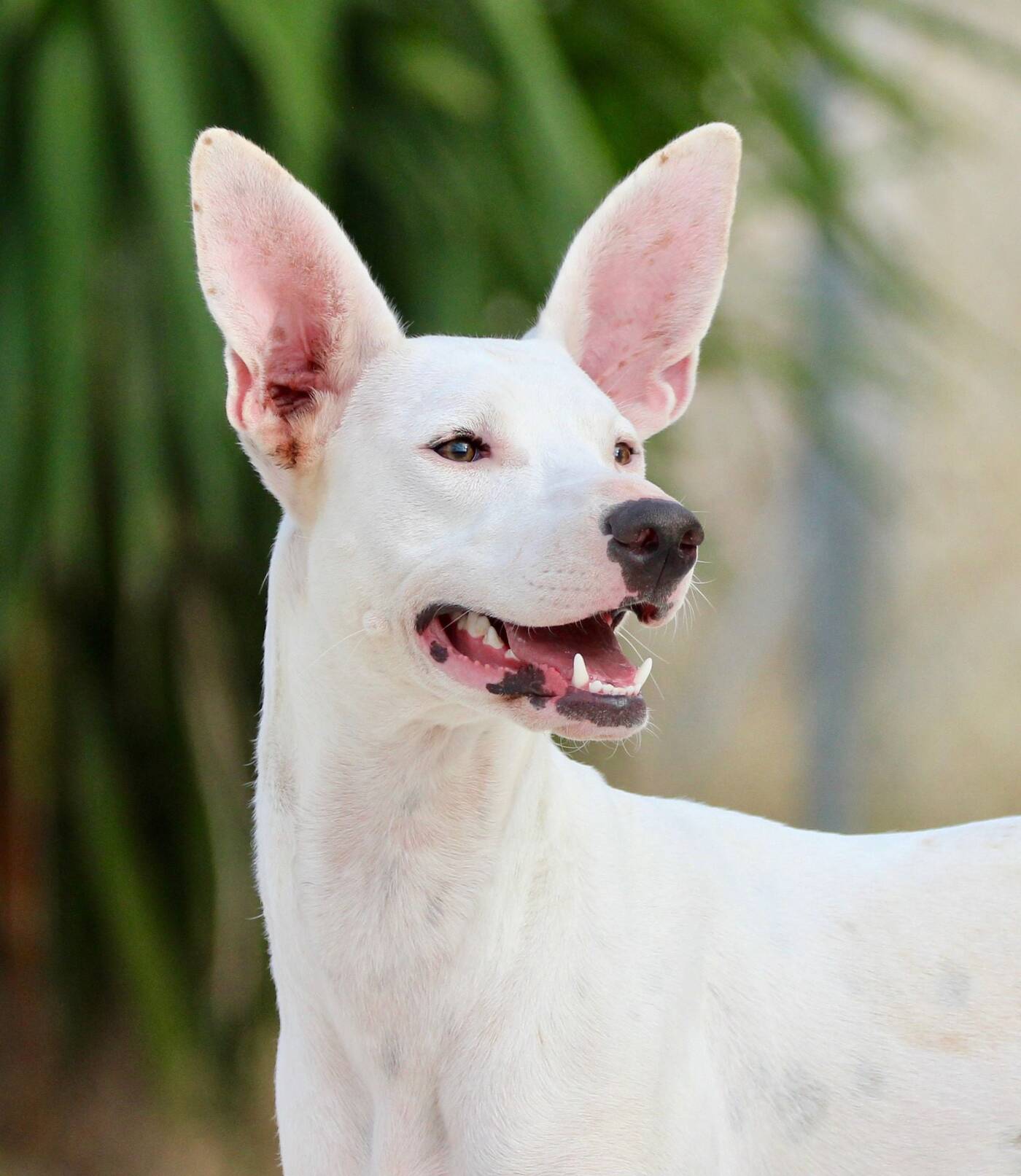 Crystal the Podenco in a glamour shot taken before her trip from Spain to Canada. Photo via Podenco Friends.

Described as clever, curious and clownish, Podencos are literally bred for speed and agility. They're intelligent, athletic animals with what rescuers call a "profound awareness" of their surroundings and sensitivity to humans.

"They are agile to the point they have been known to climb trees in pursuit of prey and can jump great heights from a stand," reads the website of another non-profit group dedicated to saving Podencos from abuse and neglect in Spain, where they're most often used to hunt rabbits.

"A secure yard with 6' fence is required for this breed."

Fortunately, Crystal's fate wasn't in the hands of an average airport crew, either: Pearson stopped all flights, brought in extra staff, and even used night-vision-equipped CCTV cameras to search for the rogue doggo. 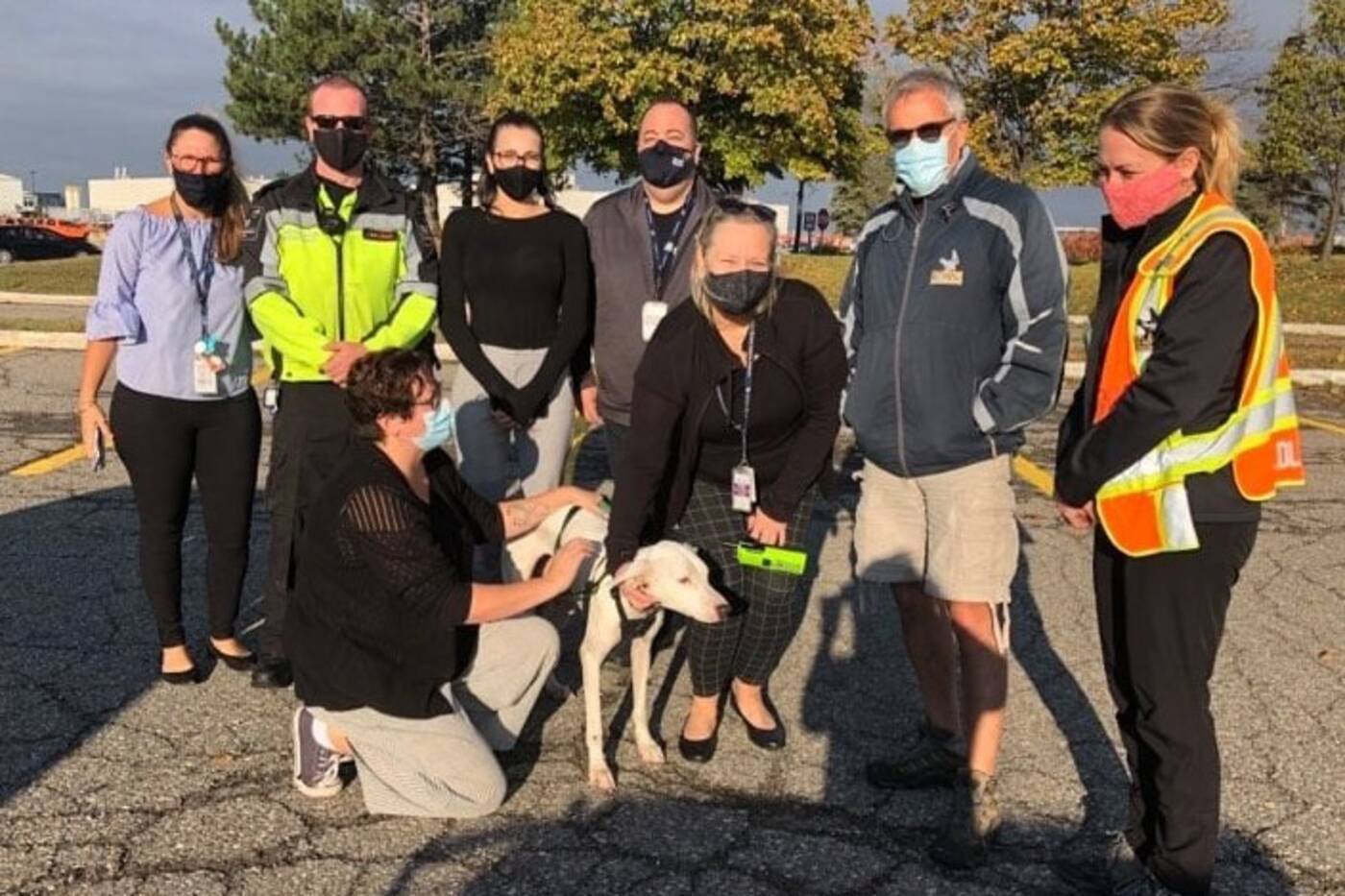 It took an entire team to save Crystal from the dangers awaiting her on the tarmac at Pearson International Airport. Photo via Beverly Farmer.

"Make no mistake this was a very serious situation, a loose dog on the runways and Toronto is a big busy international airport," wrote Beverly Farmer of Podenco Friends in a lengthy Facebook post describing the ordeal and thanking Pearson staff for their help.

"On two occasions Crystal was actually on the runway as a plane was coming into land. Luckily, the pilots did see her and they had to abort the landing and over shoot," Farmer continued.

"This could have ended so badly; She could have got sucked into an engine which could have exploded and then a terrible accident. Planes and passengers were at risk. The airport closed the runways down, cancelled flights, it was (a) major incident."

All's well that ends well, however, and Crystal is now safe and sound in Moncton, New Brunswick, with her loving adopted family.

Farmer thanked the entire team at Pearson profusely on Facebook for their hard work, but credited the capture of Crystal to Keith Everett, a professional falconer who keeps "nuisance birds" off the runway. 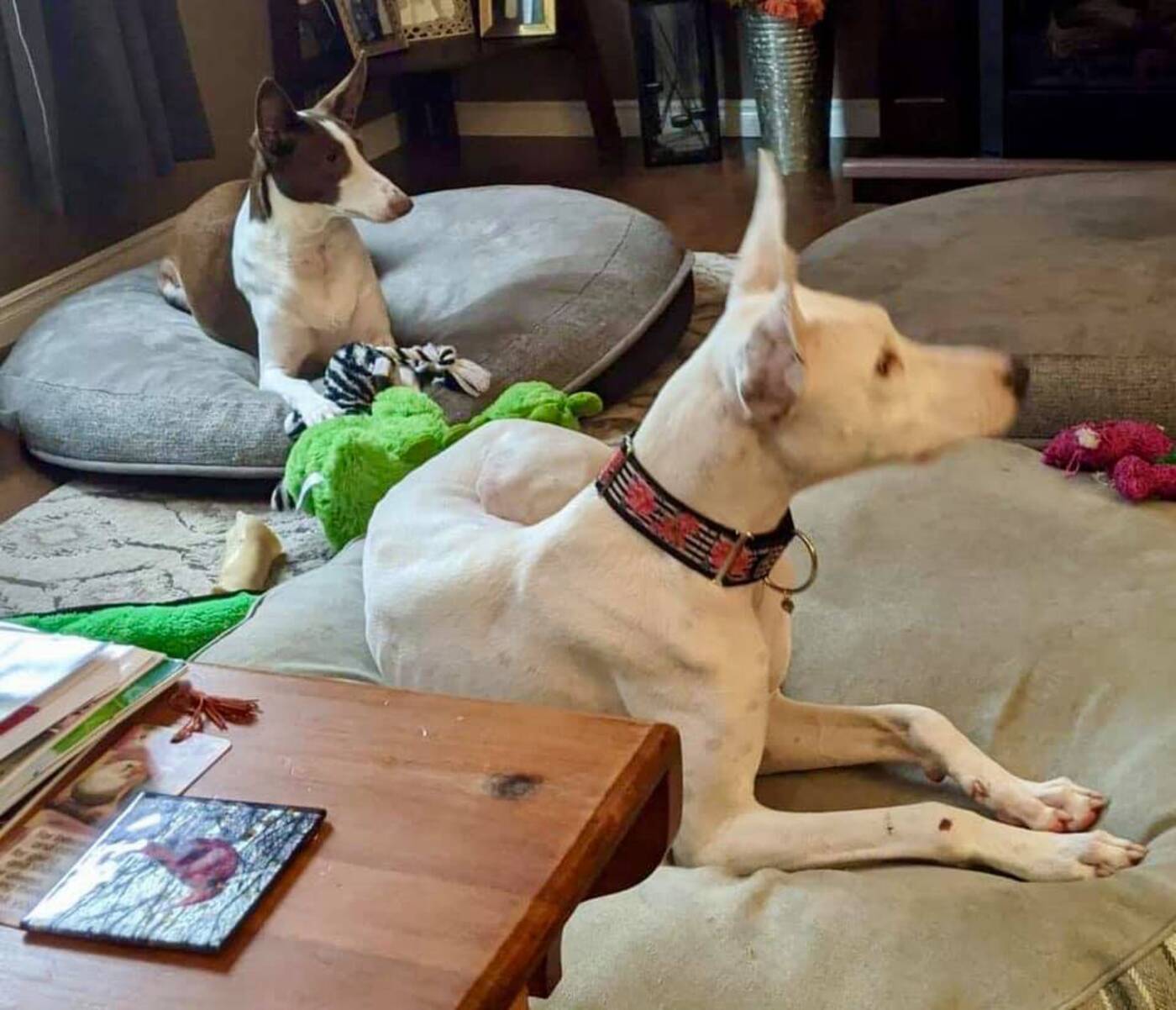 Crystal relaxing with her new family at home in Moncton. Photo via Beverly Farmer.

"Boy, could she run," said Everett to CBC Nova Scotia of Crystal, whom he chased up and down the runway for hours trying to lure.

Eventually, the pup grew tired and crawled under a truck to rest. Everett got right down under the truck with her and, with the help of some kind words and a few treats, safely retrieved her from the danger zone.

"The airport should very proud how their team handled all of this," said Farmer on Facebook. "They were totally professional, very caring and went above and beyond to bring this to a successful conclusion."

"The Podencos have gained many more friends and, throughout all of this, the dogs remained calm and impressed so many people, for they were so friendly and well behaved," she continued.

"Crystal... typical Podenco, [was] like 'what is all the fuss is about?'," wrote Farmer of the dog's response to her rescue. "'Someone get me a cheese burger.'"