The history of how Toronto got a truck smashing through a wall at 299 Queen St. West

Any list of quintessential Toronto locations must surely include 299 Queen Street West, at one time Canada’s greatest and busiest pop-culture incubator when Citytv and MuchMusic lived there.

Perhaps the most defining aspect of the building is the truck smashing out of its walls, an actual art installation which has been there since 1993.

Most people have seen it, few know its story.

Rewind to 1977: Citytv’s news program CityPulse disrupts the whole genre of news gathering with a torrent of innovation including BIPOC reporters, portable video cameras, desk-less anchors, street engagement and a rock-solid reputation for being "everywhere".

Citytv creator Moses Znaimer saw the news genre as a Soap Opera and populated his with real local characters. The CityPulse subtitle was "A day in the life of Toronto" and their motto was "the city is our newsroom".

By the early '80s, CityPulse was the first news outfit in Toronto to get a microwave transmitter built into a truck – the city’s first mobile news vehicle – known as the Live Eye.

It was a colossal game changer. The Live Eye could roll up, do a live shoot, bounce the signal off the CN Tower and to master control (all conducted by Citytv’s lead engineering boffin Ron Reid.) 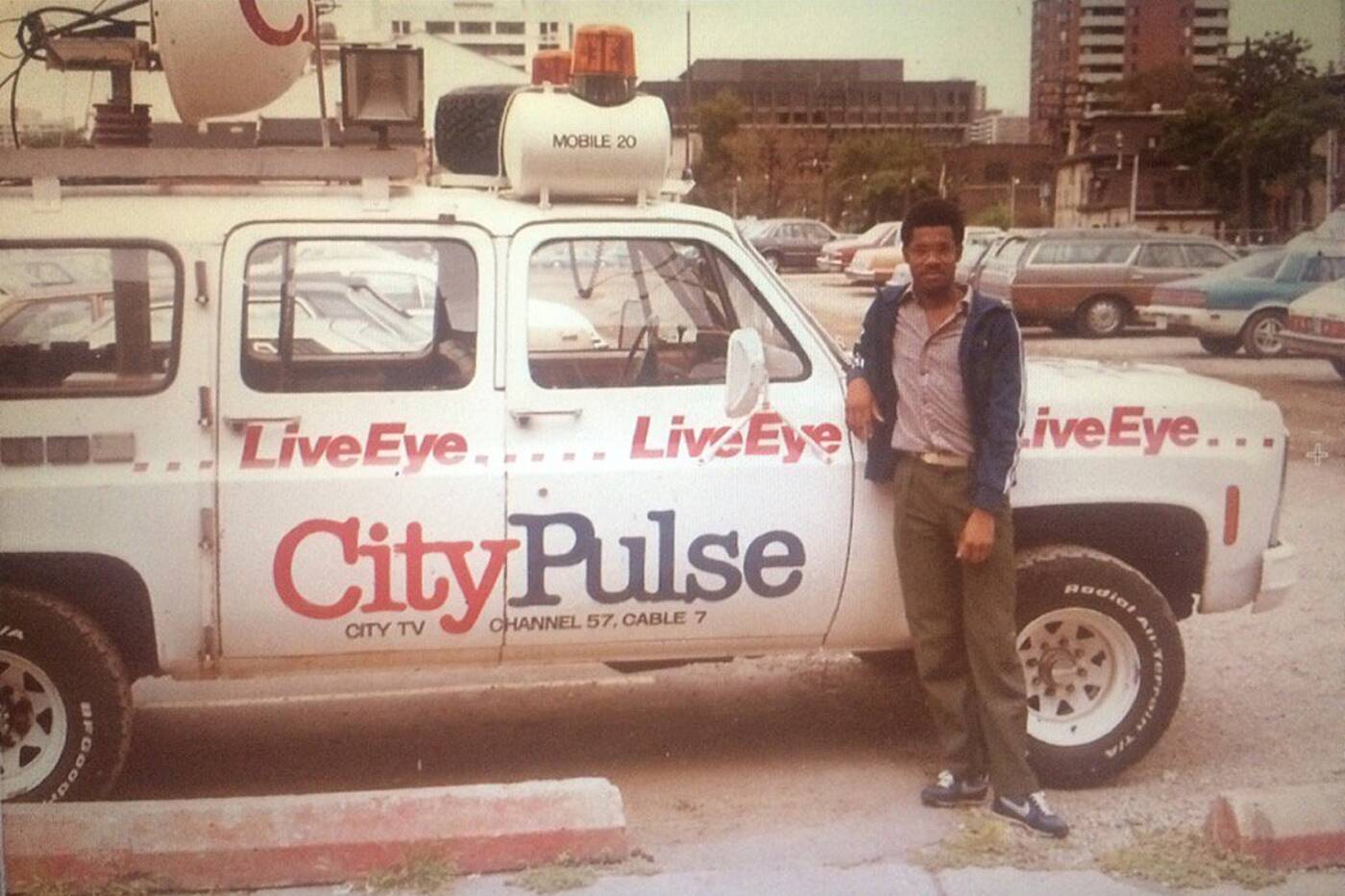 From the corner of Queen and Shuter, this is Citytv, EVERYWHERE!

The Live Eye was used for news, sports, and concerts and was in operation everyday – in the morning it might be down by the lake while the police dredged up a dead body, and in the evening it could be at the Exhibition Stadium covering a heavy metal concert.

Citytv produced a TV spot featuring the Live Eye as its own sentient character (voiced of course by "The Voice", Mark Dailey):

The Live Eye became yet another character in the Soap Opera of Toronto. It often appeared in Christopher Ward’s late-night music video series City Limits; Citytv’s in-house band The Booze Mothers even wrote a Reggae song about it (featuring Ron Reid):

By the early 1990s, there were more advanced Live Eye technology, built into larger and more nimble vehicles. The original Live Eye truck, long retired, was one day sent off to be scrapped.

Inspired by the 3-D artwork used at the "Simply Delicious" coffee shop on Queen Street West, Znaimer engaged its designer Nigel Stanley to plot a similar 3-D display which would incorporate the original Live Eye and serve as an eye catching visual to commemorate the dedicated CityPulse news crew. 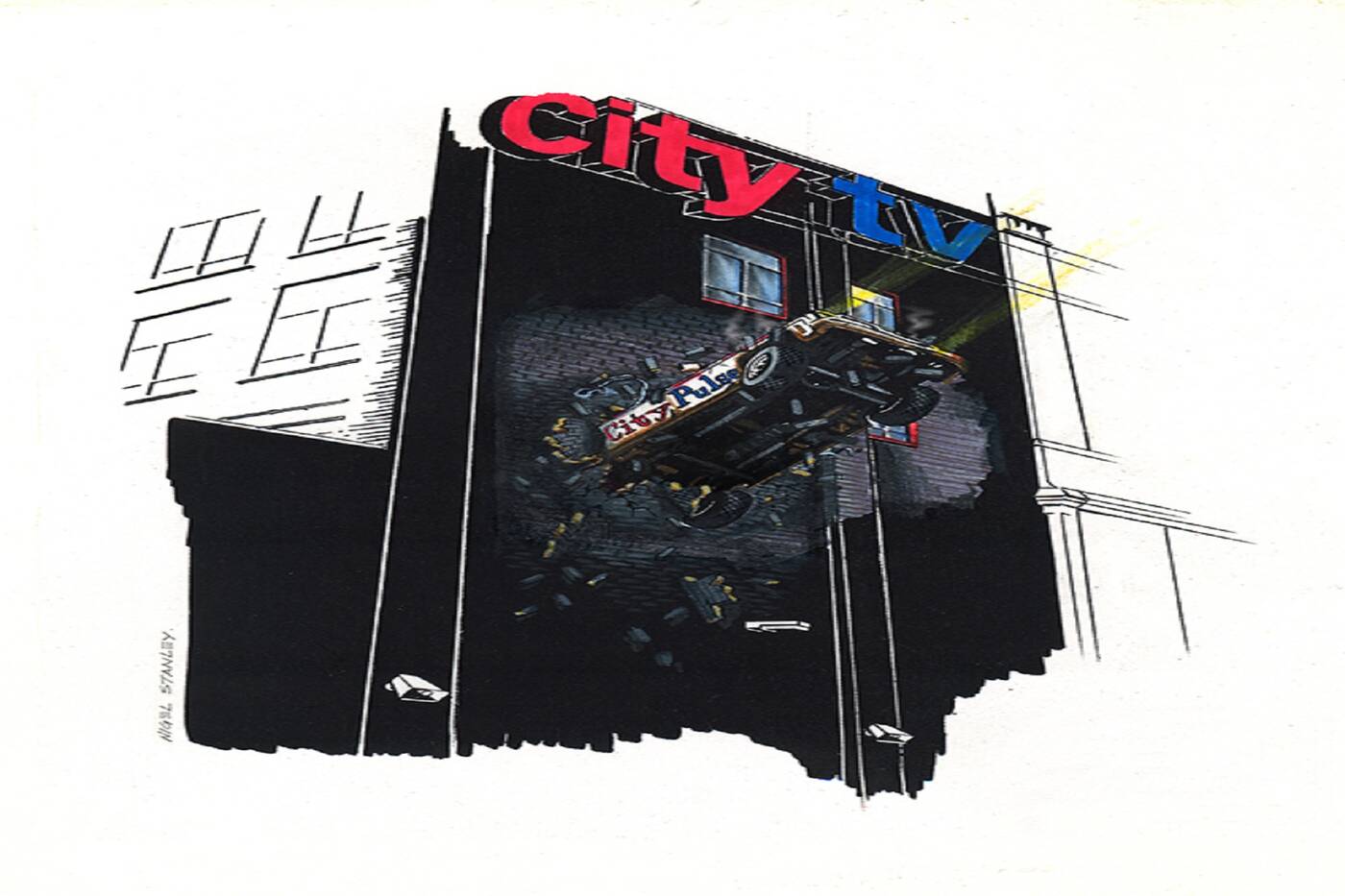 Titled "Breaking News", the installation served as backdrop for all filming which took place in front of the building and on Queen Street West. At one time its wheels would spin as its lights flashed.

Along with the Speaker’s Corner booth at the corner of Queen and John Street, it also helped solidify the Citytv brand before such a concept was common discourse. 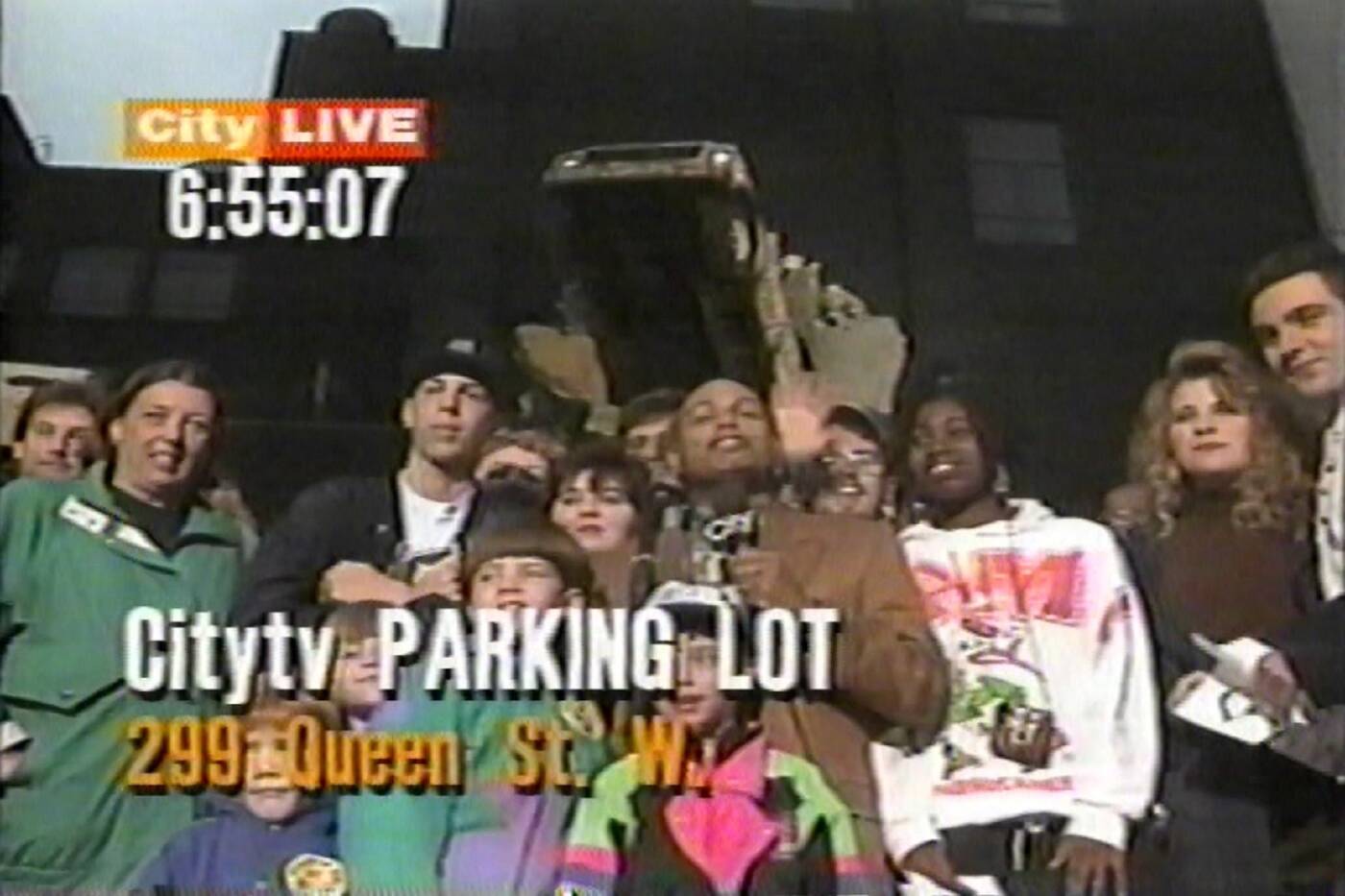 A perfect backdrop for everything from raves to weather reports.

When the CHUMCity empire was broken up in 2007, Citytv (who produced CityPulse) was sold to Rogers and moved out of 299 Queen Street West into a new building at Yonge and Dundas Square.

Bell Media took over 299 and decided to keep the Live Eye, however they had it repainted and re-branded with CP24 logos (an egregious affront to its true CityPulse legacy). 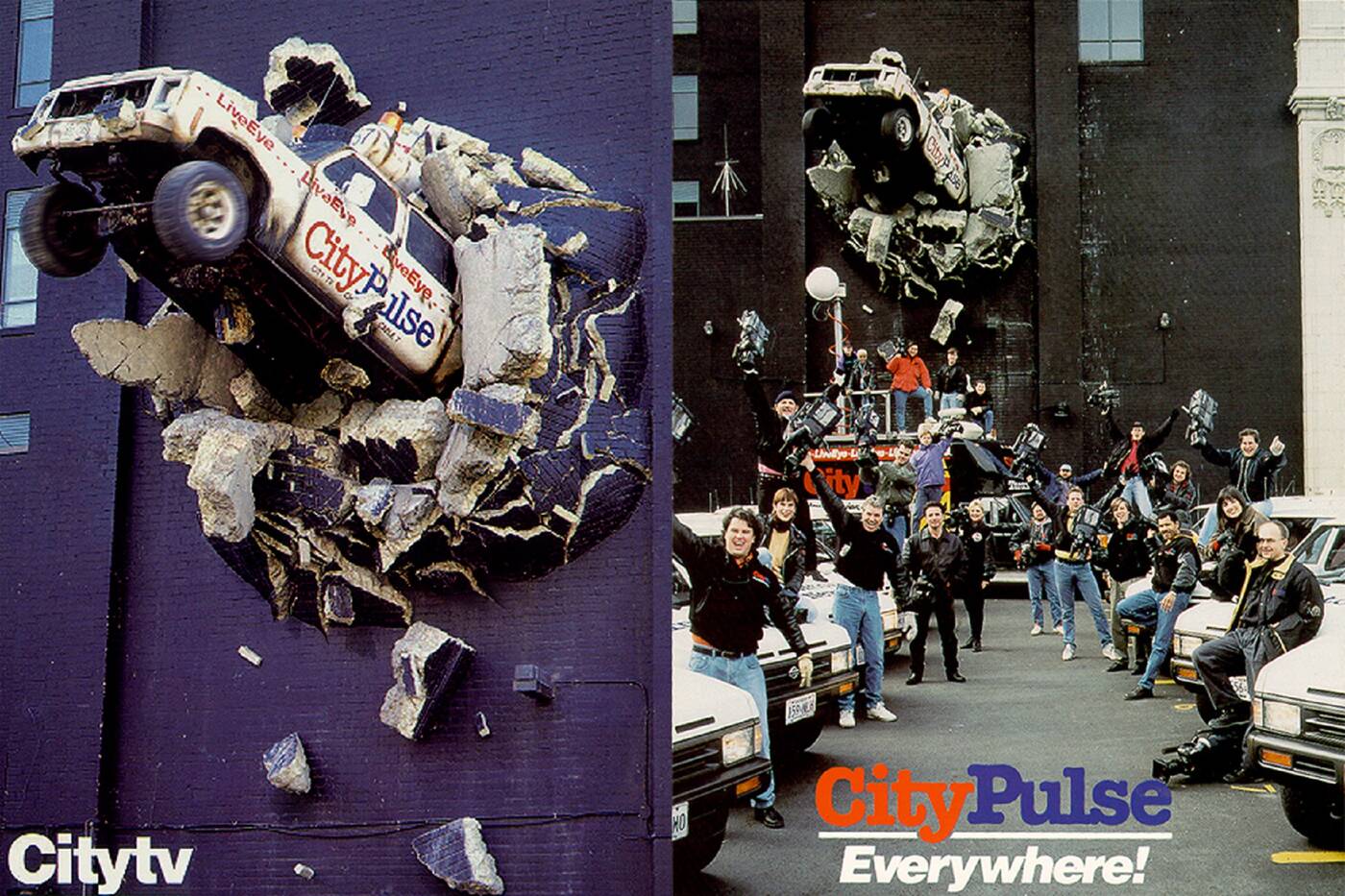 CityPulse: the city was their newsroom

While Toronto slowly loses its iconic spaces from the latter part of the last century – Sam the Record Man, Honest Eds, Ontario Place, etc – it’s good to know the original Live Eye is still there, watching over the city it helped mythologize. 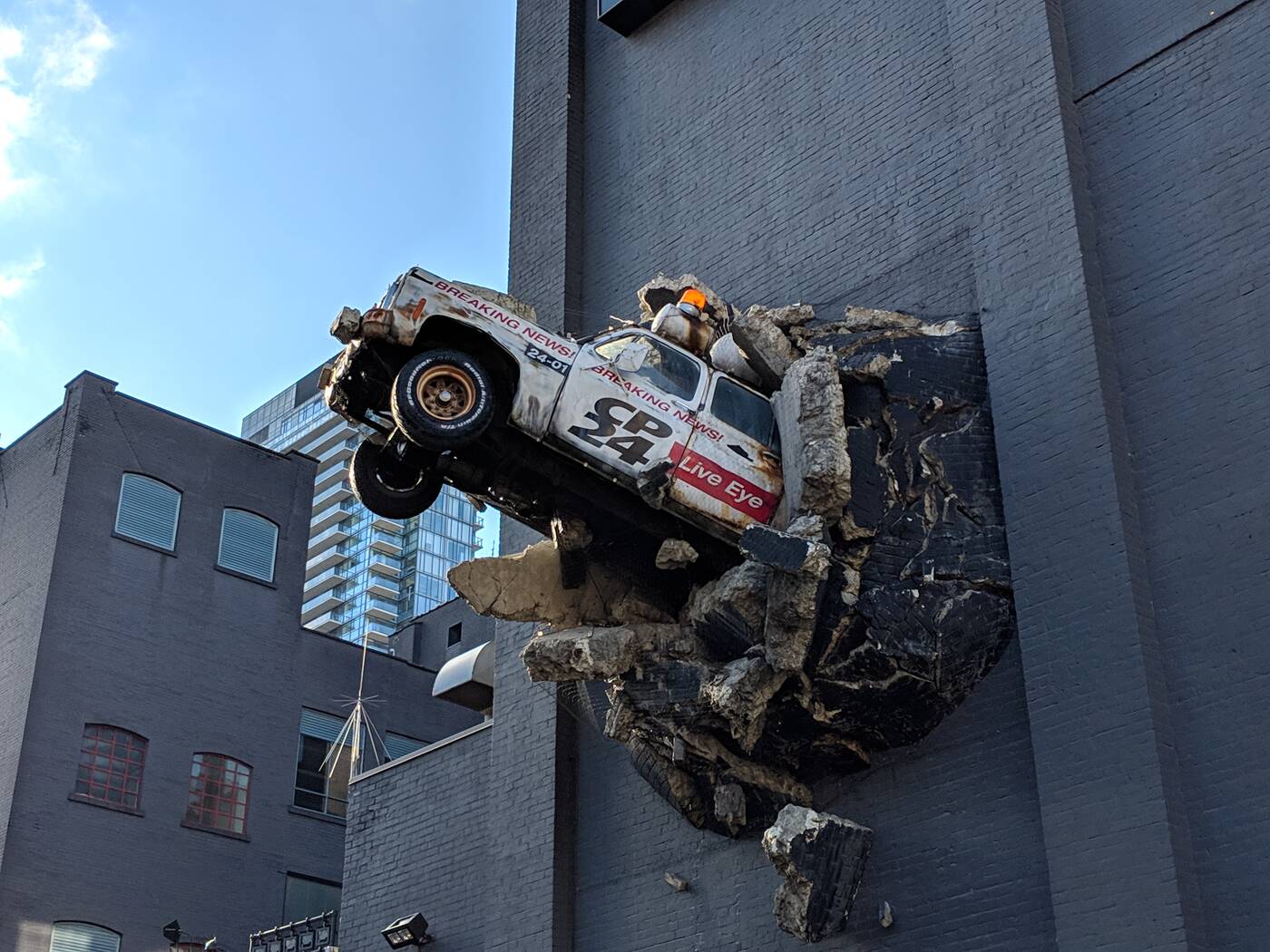